What 3-foot social distance means for reopening of California schools 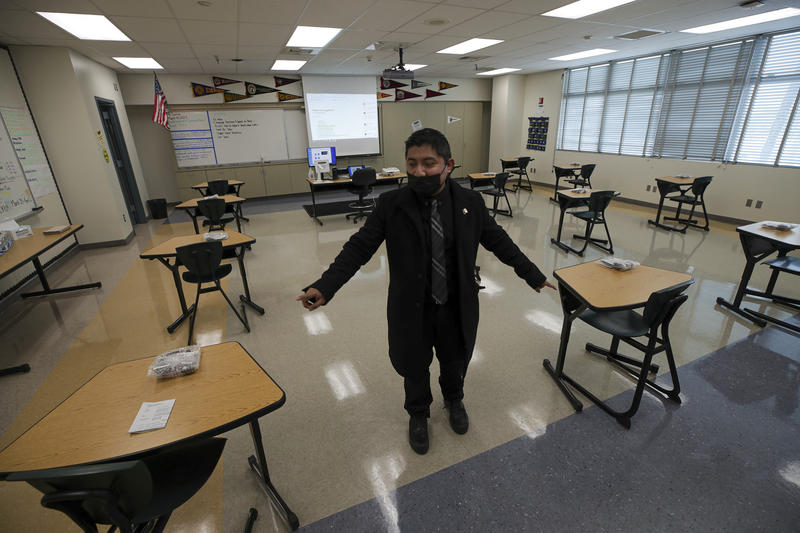 New state and federal Covid safety guidelines that reduce the recommended minimum distance between students from 6 feet to 3 feet should make it easier for California schools to return students to classrooms full time, but most districts are not likely to make the change until the fall.

Instead, many district officials contacted by EdSource expressed reluctance to make changes to instructional models this school year because most have either reopened or plan to reopen campuses in the next few weeks. 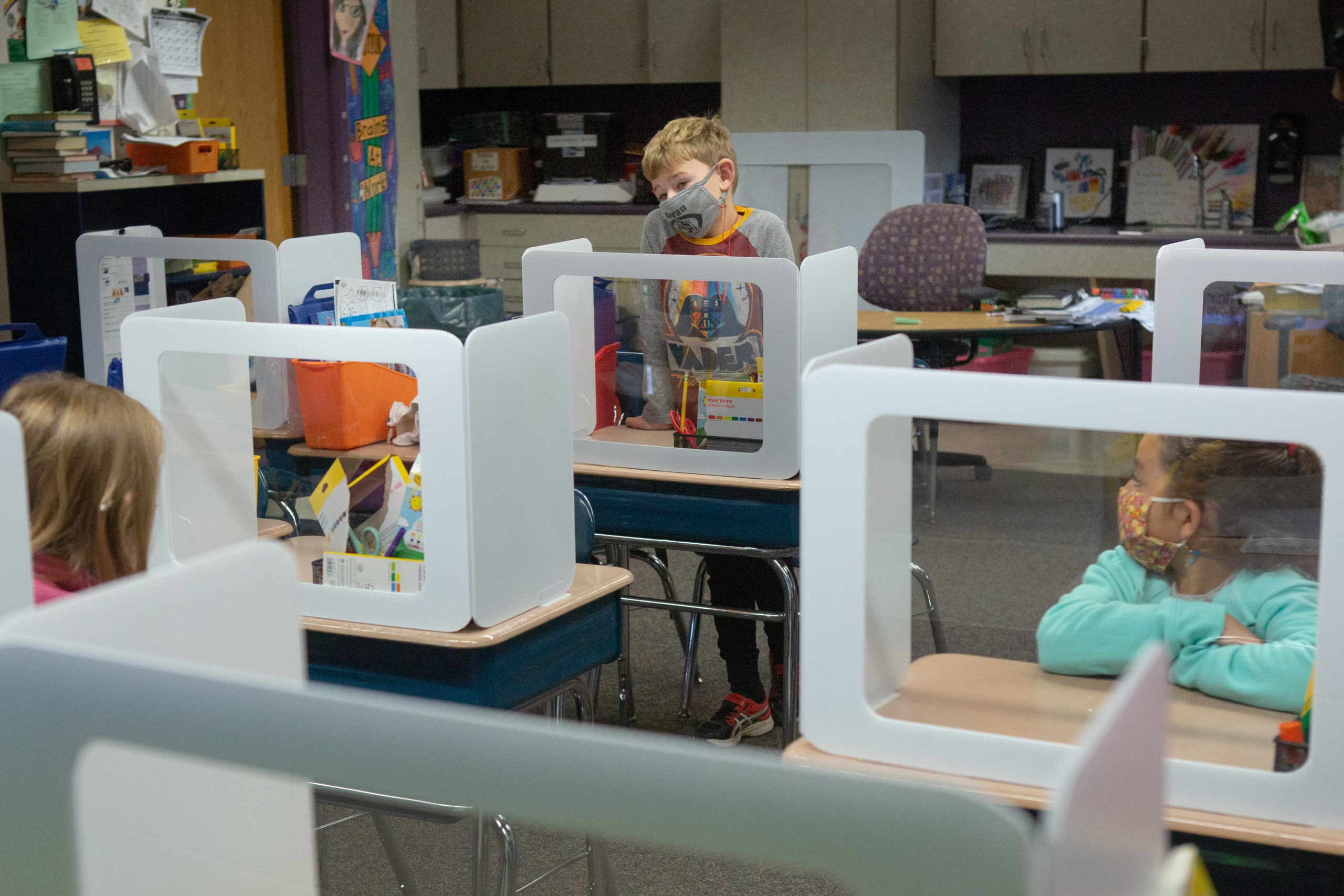 They say the revision, which the Centers for Disease Control announced on March 19 and the California Department of Public Health adopted a day later, has come too late to redo reopening plans one more time, with two months left in school this year. Many would have to renegotiate changes to reopening plans with their unions and seek approval from their school boards.

Derick Lennox, senior director of Governmental Relations and Legal Affairs for the California County Superintendents Educational Services Association, or CCSESA, agreed that the main impact will be in the fall, by making it logistically possible for full-time in-person instruction. “That paves the way to get out of Zoom school,” he said.

“The latest guidance from the CDC and the California Department of Public Health comes after months of planning at the local level for a safe return to in-person learning,” said Jeff Freitas, president of the California Federation of Teachers, the state’s second-largest teachers union. “We are concerned that our schools lack the time needed to now update other mitigation measures, including adjusting ventilation based on an increased number of students in classrooms.”

However, those districts that had tied labor agreements specifically to CDC and state reopening guidelines, without tying them to a minimum rate of Covid infection or full vaccination protection of teachers, can probably cite the change to pivot quicker. Some are using the opportunity that 3 feet offers to now switch to a four- or five-day, full-day schedule in elementary schools. Some districts, including El Dorado Union High School District, plan to adopt that schedule for upper grades, too.

Palo Alto Unified, which has been operating with morning and afternoon shifts of in-person instruction in most elementary schools since the fall, will switch to full-time, full class instruction on April 19 for grades 3, 4 and 5, with younger grades to follow at the end of April, said Superintendent Don Austin. Half of elementary school students’ families have chosen distance learning for the rest of the year, and that won’t change for them and for middle and high school students.

The Centers for Disease Control lowered the recommended distance between students last week because new U.S. and international studies showed not only that Covid transmission has been low in schools where students are required to wear masks, but also that it didn’t make an appreciable difference whether social distancing was 3 feet or 6 feet.

While both the CDC and California had adopted the 6-foot rule, the state’s guideline allowed the minimum distance to drop to 4 feet when 6 feet was not “practicable.” County offices of public health interpreted the distinction differently, with most sticking to 6 feet, while others, including rural counties, made 4 feet the default minimum. San Francisco Unified will follow San Francisco Department of Public Health guidelines and retain 4 feet between students’ desks when campuses reopen on April 12.

The 6-foot guideline seems like it will remain the norm, for now, in most large urban districts.

Fresno Unified, which has 73,000 students, will continue with plans to begin reopening campuses on April 6 with student desks set 6 feet apart, according to spokeswoman Vanessa Ramirez. The policy follows county public health guidelines, which still recommend that schools practice 6 feet of social distancing in indoor and outdoor settings, she said.

The 30,000-student Modesto City Schools will transition from distance learning to partial in-person instruction for grades 7-12 starting March 29, but students will do two days in person, three days online, as originally planned. The 3-foot rule didn’t change Santa Ana Unified’s resolve to stay in distance learning for the rest of the school year, although the 50,000-student district may increase the size of cohorts of struggling students getting extra help in school while learning on Zoom.

In his weekly update Monday, Los Angeles Unified Superintendent Austin Beutner said the district also will space students 6 feet apart when campuses begin to reopen in mid-April — a position supported by the teachers union, United Teachers Los Angeles. Despite that, Beutner said that elementary students in Los Angeles Unified will return for full-day instruction five days a week. Students will spend half of the day with their teacher and the other half in one-on-one tutoring sessions, recess, lunch and extracurricular activities.

Beutner said the new CDC guidance doesn’t address the challenges facing schools in urban areas like New York, Chicago and Los Angeles, where parents have been more reluctant to send students back to school.

“There are plenty of seats in classrooms that remain empty in New York and Chicago,” he said. “And putting more desks in the room won’t convince families that schools are safe.”

Beutner said that the 3-foot rule could enable expanding plans for summer in-person instruction, however.

Since Placer County, northeast of Sacramento, had adopted a 4-foot minimum, the switch from 4 feet to 3 feet was immediately helpful for Rocklin Unified. The district, with 11,600 students, already had planned for its four middle and high schools to join elementary schools with five-day, full in-person instruction in April. The switch to a 3-foot radius will make that easier by eliminating a need for overflow rooms in some high schools, said Rick Miller, a member of the Rocklin school board.

Returning to in-person instruction poses big challenges for high schools. The state recommends that students stay all day in the same “stable groups” to avoid passing in the halls and mixing with other students. But that’s impractical with high schools and, to a lesser extent, middle schools, since students’ course schedules are all different. As a result, most high schools have remained in distance learning or plan to return a few hours or days a week next month.

However, Rocklin’s two high schools will resume a normal schedule. The district has had dozens of positive Covid cases among staff and students since schools have reopened last fall. But the district never had to quarantine a school, Miller said. Rocklin is a wealthy, suburban community with a low rate of Covid-19 cases.

Shasta County, in the northernmost part of the state, also has had relatively low rates of Covid-19 infection. Almost all students in Shasta County will return to campuses full time as a result of the new social distancing guidelines, said Michelle Larsen, health and nutrition director for the Shasta County Office of Education.

Shasta Union High School District will increase the number of days its 4,150 students are on its campuses for in-person instruction from two to four days a week beginning April 12. Wednesday will remain a distance learning day, according to Superintendent Jim Cloney. Students who want to will be allowed to continue in the hybrid model that has them on campus two days a week, he said.

While they move ahead with reopening plans, counties and district officials are also keeping one eye on the court case in San Diego County. Last week, Superior Court Judge Cynthia Freeland sided with parent groups advocating an immediate reopening of school campuses to all students in their lawsuit against the state and six school districts in San Diego County. She issued a temporary restraining order, pending a full hearing on April 8, setting aside the state’s 6-foot and 4-foot social distancing guidelines.

Freeland said the state had failed to justify the basis for restrictions that interfered with students’ constitutional right to an equal education, which the Legislature defined as in-person instruction to the extent possible during the pandemic.

Freeland has given the six districts — San Marcos, Poway, Carlsbad, Vista, Oceanside and San Dieguito Union High School District — until April 8 to show why they shouldn’t open up their schools to in-person instruction. It’s possible she may issue a permanent injunction.

Poway isn’t waiting for that, said Superintendent Marian Phelps. The 35,000-student district will space students out 3 feet or 4 feet apart even though the San Diego County Public Health Department is still recommending 6 feet of distance between students, Phelps said.

The district plans to bring high school students back to school for in-person instruction full time either before or after spring break, which starts April 12, Phelps said.

“I’m super excited because it allows us to come back to some sort of normalcy,” Phelps said of the changes. “They are allowing us to have in-person graduation ceremonies. I’m super excited about that. The fact we are able to bring more kinds back on campus is a huge win.”

The parent groups behind the San Diego lawsuit say activists elsewhere in the state are watching developments and planning similar litigation if districts refused to open up the schools full time now.

“We are doing all we can to educate and inform parents at the end of their rope because their kids are suffering” by continued distance learning, said Ginny Merrifield, the executive director of the Parent Association of North County San Diego.