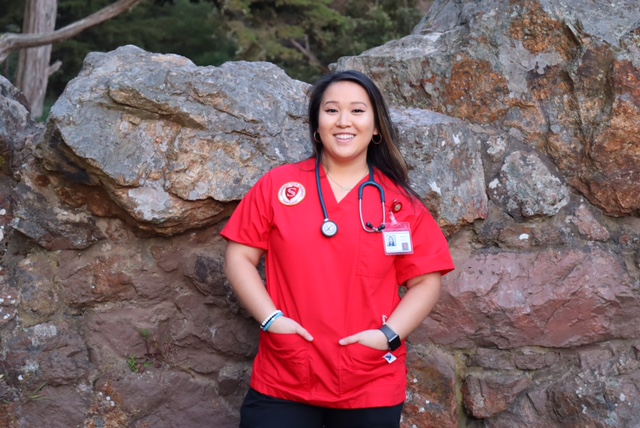 Photo courtesy Amber Nguyen
Amber Nguyen, a nursing student at Stanislaus State, plans to return to Oakland and work in the community.

Photo courtesy Amber Nguyen
Amber Nguyen, a nursing student at Stanislaus State, plans to return to Oakland and work in the community.

As school districts search for ways to reengage students after the pandemic, at least one district in California has found success in a health career training program that’s led to higher graduation rates, more students enrolling in college — and rave reviews from students and alumni.

The health career pathway at Oakland Unified, in part coordinated through the Linked Learning Alliance, has seen its enrollment almost triple in the past four years, with especially big gains among students of color. The alliance is a nonprofit that advocates for and certifies career pathway programs in schools.

“The results of this study suggest that health pathways are a promising means to improving students’ high school and postsecondary outcomes,” according to the report, which looked at four years of data from Oakland Unified.

The pandemic has highlighted the racial and ethnic disparities in health professions and accentuated the need for programs that bring more young people of color into the field.

After nearly two school years in which students have received much of their instruction via distance learning, the career pathways approach points to a research-based strategy with the potential to engage students when they return to school in the fall and beyond.

Oakland Unified has had health academies at its high schools since the 1980s, but in 2014 voters approved Measure N, a parcel tax, to create additional pathways linking the high school curriculum to college and careers.

Currently, 80% of the district’s high school students participate in such programs. The goal is to bump up that number to 100%.

The initiative got a major boost in 2014 as a result of a $21 million grant from Atlantic Philanthropies, a charitable foundation that closed its doors in 2020, to expand the program and create internships in conjunction with the Alameda Health Care Services Agency and the Alameda Health System.

Known as the Oakland Health Pathways Partnership, the aim of the program is to give students hands-on job training in a growing field and help diversify the health care workforce, where Blacks and Latinos are significantly underrepresented.

In 2019-20, more than 1,500 students in seven Oakland Unified high schools, including a continuation school and a school for recent immigrants, were enrolled in the health career pathway.

In addition to taking college preparatory science classes, they did internships at local health facilities such as Highland Hospital, a regional trauma center and 236-bed teaching hospital that’s run by the county.

“It’s popular because it’s applied. It’s focused on college and career. Everything students are learning, they need for their internships,” said Rebecca Lacocque, the district’s Linked Learning director. “It’s not, ‘You’ll need this when you’re older.’ It’s what you need to know right now.”

The program offers an internship for 8th graders, but most students begin the program in 10th grade and stay with a small cohort of classmates until graduation. Most take all the usual classes required for college admission, but with a health emphasis. In math, for example, they learn how to analyze public health data. In English, they read fiction and nonfiction about the medical world, and learn to write and analyze case studies. They also take classes that prepare them for their internships, covering topics such as workplace professionalism, medical terminology and basic medical skills like taking blood pressure and checking vital signs.

Abril Reynosa, a junior at Fremont High School in Oakland, has already put her new medical skills to use. In February, a neighbor was shot in the elbow outside her house, and Reynosa applied a tourniquet and cared for him until police and paramedics arrived.

“I was able to stop the bleeding and I checked him for other wounds,” she said. “I held his hand and told him to breathe and focus on me. … Looking back, I’m a little speechless. I didn’t even know I could do those things. I’m just really grateful I had that training and could help him.”

Prior to joining the health pathway, Reynosa wasn’t much interested in school. But the event with her neighbor inspired her to consider a career in trauma care, maybe as a physician.

“I like the health internship because we’re not just reading stuff. We’re learning practical skills, gaining knowledge that’s actually interesting and useful,” she said. “It made me realize I want to do something that matters, and everything in health care matters.”

Alumni of the district’s health pathway credited the program with launching their careers, not just in the best-known health care occupations but in other related fields.

Hui Qiao Wu, a nursing student at UCLA, said joining the health pathway in eighth grade changed her life. As an immigrant from China, Wu said she was shy and unsure of herself as she struggled to learn English in elementary school. But when she enrolled in the health pathway, her confidence grew. Not only did she get to witness childbirths, gall bladder surgeries, kidney stone operations and other procedures at Highland Hospital, but she developed close relationships with her teachers and classmates in the program.

“The (health pathway) helped me mature a lot,” she said. “When you’re in the hospital, staff aren’t always by your side, and you have to be professional and think on your own. It really forced me to grow. … My peers became my friends, and we really supported each other.”

Amber Nguyen, a nursing student at California State University, Stanislaus, in Turlock, also started the health pathway in eighth grade. By the time she graduated from Oakland Tech, she had completed internships at Highland Hospital and a Veterans Affairs clinic in Oakland, and knew she wanted to pursue health care as a career — serving low-income residents of Oakland and eventually teaching.

“The health academy had a great impact on me. Those teachers and counselors saw potential in me, really pushed me,” said Nguyen, who’s the first in her family to attend college. “Now I’d like to give back to the community and work at Highland again, come full circle.”

For some students, the health pathway doesn’t lead to a career in traditional health professions like being a doctor or a nurse, but to other health-related professions.

Aliza Newman, who graduated from Oakland Tech in 2016, loved her time interning at Sutter Health’s birth center and considered pursuing a bachelor’s degree in nursing. But at age 18, “I didn’t want to get locked into a career yet,” she said.

Instead, she majored in communications and political science at UC Santa Barbara. But in her first job, doing marketing and social media for a chapter of the American Academy of Pediatrics, she’s merging her health and communications skills.

She says one thing the Health Academy exposed her to was the range of career options. “They showed us so many other roles, not just doctors or nurses,” she said.

Her classmate, Azisa Todd, always knew she wanted to pursue a career in health care, and said the Oakland Tech health academy helped expose her to the many career options within the field. After graduating from UCLA, she’s pursuing a master’s degree in public health from the University of San Francisco and working on an initiative in San Mateo County that trains mental health clinicians and other health care providers on issues related to gender identity and sexual orientation.

Reflecting on her time in the health pathway in Oakland Unified, she said, “It helped ground me in a lot of the work I do now, helping me figuring out what I wanted to.”

The SRI report noted that Oakland Unified’s health academy wasn’t the only career pathway that had successful outcomes. Students enrolled in the district’s other career programs, including engineering, arts, business and environment, also had high rates of graduation and college enrollment.

Those successes have been repeated around the state, where more than 100 other districts have Linked Learning Alliance career pathways.

“Oakland is just a microcosm of what we’re seeing everywhere,” said Anne Stanton, president of the Linked Learning Alliance.

Over the next decade, Linked Learning Alliance hopes to expand into middle schools, community colleges and other states, eventually enrolling a million students, she said. Its programs are currently in 20 states and include 250,000 students.

“With the pandemic, we are losing so many kids right now,” Stanton said. “We need to do everything in our power to make sure they stay connected to school and get access to college and meaningful careers.”