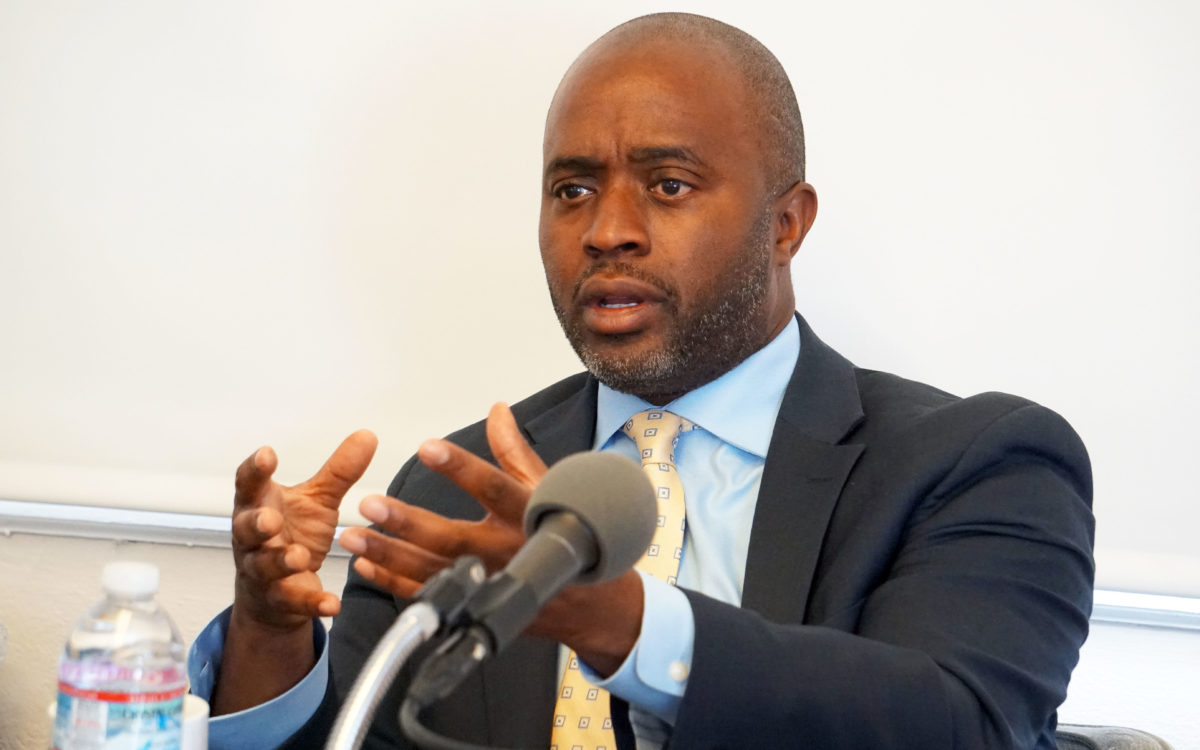 Tony Thurmond, California’s state superintendent of public instruction, didn’t expect the school closures across the state last year to last more than a few weeks. County school superintendents that he spoke with about the pandemic response weren’t too concerned either. It would be an extended spring break, Thurmond thought.

“I don’t think any of us understood the significance of what this really was, what we were facing,” Thurmond said.

As the top elected official responsible for K-12 schools, Thurmond has been under considerable pressure to take action to reopen school campuses, but lacks authority to make such decisions. Instead, Thurmond uses his relationships with legislators and the governor, his power to convene groups of people and the bully pulpit his position provides to try to accomplish his goals.

Earlier this month, Thurmond spoke to EdSource by phone from the California School for the Deaf in Riverside. Like 90% of his staff, Thurmond has not worked at the California Department of Education office in downtown Sacramento since the pandemic began. Instead, he has been working from his home in Richmond or other workspaces.

Like other parents, he sometimes struggles to find a quiet space in his house to participate in Zoom calls while his two daughters are online doing schoolwork. About a month ago, he began rotating his time between offices at the state’s schools for the deaf and blind located in Riverside and Fremont, and at some of the state’s food distribution sites.

“I can’t remember the last time I’ve been in Sacramento,” Thurmond said.

In the long-ranging 90-minute interview, Thurmond, 52, talked about the last year. He described the pressure he felt from county school superintendents to decree that all school campuses be closed after Gov. Gavin Newsom declared a state of emergency in response to the spread of the coronavirus. Thurmond told the superintendents he didn’t have the authority to call for schools to close, but agreed to write a letter saying they should.

“Then they all exploded and started yelling and saying ‘Why?’” Thurmond said. “I realized they had wanted cover from people being angry at them for saying — what everyone knew at the time to be true — that without any clarity on what this pandemic really meant, the right thing to do is remain in a kind of distance-learning environment.”

As administrator of the 2,500-employee California Department of Education, the state superintendent lacks the authority to set education policy and to make local decisions like whether school campuses should be open or closed.

“You know wherever I go, people, even in the grocery store, people ask me. ‘Hey, can you help to get our schools open?’ Because they think the state superintendent means I have direct control over 10,000 schools in 1,000 districts,” Thurmond said.

The power of the superintendent was trimmed in the early 1990s when then-Gov. Pete Wilson, a Republican, took then-State Superintendent of Public Instruction Bill Honig, a Democrat, to court. The State Board of Education, which is appointed by the governor, has more policymaking powers than the superintendent, who sits on the board as a non-voting member.

A year after the shutdown order, most of the state’s campuses are still closed, with students at home in distance learning. During the past year, some students thrived, while others struggled to learn online, battled depression brought on by isolation or had problems accessing the technology needed for distance learning.

Thurmond said that closing schools was a good decision.

After schools began closing a year ago, priorities at the California Department of Education quickly changed. Pre-pandemic, the department launched efforts to expand community schools, improve mental health resources on campuses, increase teacher recruitment and develop strategies to close achievement gaps. Then schools suddenly had to shift to keeping students and school staff healthy during the pandemic, Thurmond said.

The department petitioned for a waiver from the federal government to allow families to pick up meals for their children without having to prove they live in the community and without bringing their children with them — considered a health risk early in the pandemic. 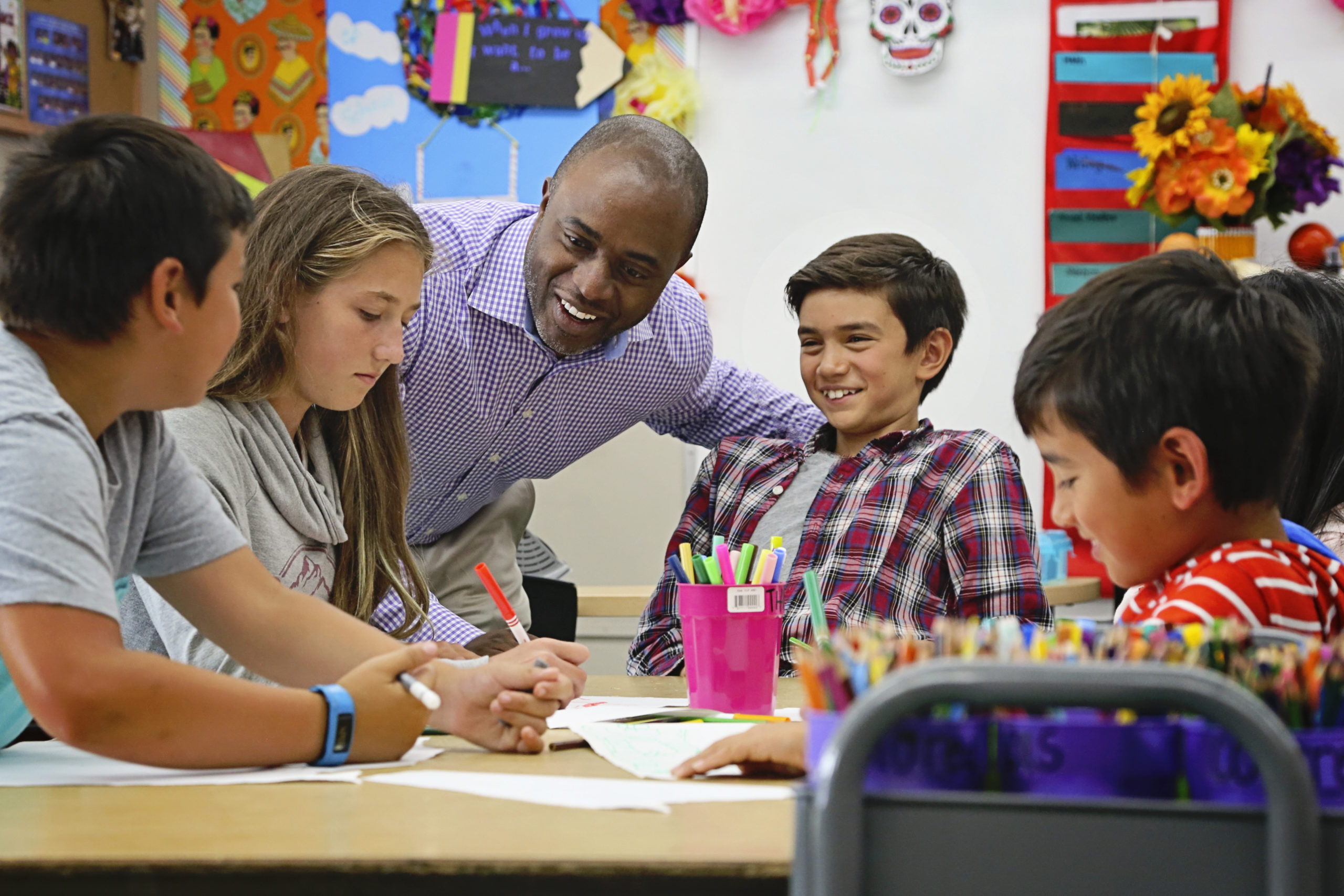 Education department staff scheduled webinars to explain state guidance to school district officials and to train teachers in online instruction. They enlisted mental health professionals as part of a counseling coalition to help students and teachers who were struggling emotionally during the pandemic. They asked corporations to donate or offer low-price computers and internet connectivity for students and teachers who needed them.

Thurmond said he convened a meeting of the state’s teachers unions and school district officials last spring, after it became clear school campuses would be closed longer than two weeks. The group discussed what would be needed to provide distance learning. The idea was to build a template that could be used for the labor agreements that would be needed to substantially change the model of instruction. Many districts and their unions have used the template, he said.

As schools began to consider returning to in-person instruction, Thurmond said he invited labor representatives and district management back to the table to discuss returning to school. The result was the 55-page guidance document, “Stronger Together: A Guidebook for the Safe Reopening of California’s Public Schools,” that was released in June.

Since last March, schools have closed, opened and often reclosed as Covid cases spiked or fell within communities. Many school districts seemed prepared to stay closed through this school year until Newsom’s reopening plan  was announced, offering incentive money for districts that reopened classrooms for their youngest students by April 1. Districts that can’t reopen by that date can still get grant money, but the amount will be lowered.

“I think we’re racing against the clock for a lot of districts,” Thurmond said. “You know, April 1 may be a hard-to-meet date for some of them.”

Despite that, Thurmond calls the plan a good one and said that some of the ideas he submitted to the governor in December were included in the plan, including funding Covid testing and strategies like summer school to combat learning loss.

The state reopening plan sets aside $4.6 billion for summer school and extra learning time for students. It also allows schools to use state funds for Covid testing, although it is only required if a student or staff member is symptomatic, or if the district fails to post a Covid safety plan by March 31.

Thurmond was notably absent from the news conference in Elk Grove on March 1 announcing the governor’s $6.6 billion plan to reopen schools. When asked later why Thurmond did not attend the event, education department spokeswoman Maria Clayton said the superintendent was not aware of the event.

Newsom’s decision to let county health departments decide when schools could safely reopen effectively also elevated the role of county superintendents of schools and cut the Department of Education out of that process.

Margaret Fortune, president of the charter school chain Fortune School, said during the pandemic she has had to rely on the Sacramento and San Bernardino county offices of education and public health offices to provide guidance to the nine schools she operates in those counties.

“From a local perspective, the California Department of Education hasn’t been in the lead or factored into the equation during Covid-19,” said Fortune, who also is a past president of the California Charter Schools Association.

Heather Hough, the executive director of Policy Analysis for California Education, said the state should step away from local control during the pandemic and take a larger role in procuring needed equipment to safely reopen schools, as well as taking the lead in creating curriculum and formative assessments that are compatible with the new instruction models that are being used.

A formative assessment is an ongoing process that uses a test or other method in the classroom to measure a student’s comprehension, learning needs and academic progress.

“I think there is a benefit to local control, but I think in times of emergency it calls for more leadership than what we experience in times of peace,” Hough said. “We are in this time when every district is asked to do things they have never done before in the face of uncertainty and changing directive and lots of public anger and confusion. This is the time when local control is much harder to do in that setting.”

“Someone at a higher level should take that off their plates,” Hough said.

Thurmond says some good things have come out of the pandemic, like the many computers and hot spots that went to students who didn’t have them. He’s hoping it will reduce the digital divide between students from low-income and higher-income families, or eliminate it altogether.

That could be even more important if distance learning remains a vehicle for instruction in the future in California, as Thurmond expects.

“While I don’t want to say anything good is coming out of the pandemic — I think it’s just awful — I do think it forces us to think differently about systems that, in many cases, weren’t helping our kids and barriers that many of our kids were working to overcome,” Thurmond said. “So I’m hopeful that we’ll walk away from this being more thoughtful about ways to help our students overcome these barriers.”