San Francisco puts renaming of schools on hold after ‘mistakes’ 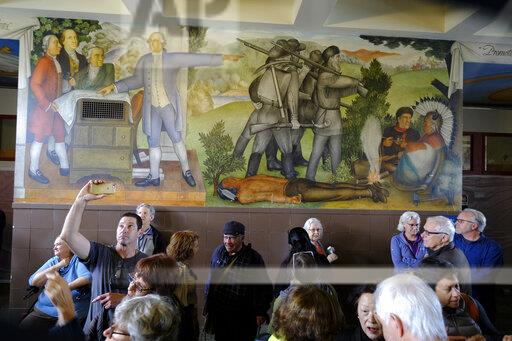 AP Photo/Eric Risberg
People fill the main entryway of George Washington High School to view the controversial 13-panel, 1,600-square foot mural, the "Life of Washington," during an open house for the public in San Francisco on Aug. 1, 2019.

AP Photo/Eric Risberg
People fill the main entryway of George Washington High School to view the controversial 13-panel, 1,600-square foot mural, the "Life of Washington," during an open house for the public in San Francisco on Aug. 1, 2019.

Fending off a cascade of criticisms, the threat of a lawsuit and a possible recall campaign, the president of the San Francisco school board has put on hold the board’s decision made just a few weeks ago to rename 44 public schools, including those named after George Washington, Abraham Lincoln and Dianne Feinstein.

In an op-ed article in the San Francisco Chronicle, board President Gabriela López said she takes responsibility for “mistakes that were made in the renaming process,” without detailing what those mistakes were, and now wants “to provide more opportunities for community input.” She said the renaming controversy has turned into a “distracting public debate” that has taken away attention way from her number one priority — to reopen the city’s public schools for in-person instruction safely, and as soon as possible.

The board’s decision to rename its schools, made on Jan. 27 by a 6-1 vote, is just one of a number of controversies and challenges the board is facing. Those include intense criticism for its failure to reopen schools for in-person instruction, even though from a health perspective San Francisco has experienced lower levels of the Covid-19 virus than perhaps any other urban city and county in the state for extended periods of time. On that front, it also faces a legal challenge by city attorney Dennis Herrera, who filed a lawsuit against the board and the district’s superintendent to force it to open its schools.

It is also dealing with an intense and emotional debate over its decision to open up admission to Lowell High School, the city’s most selective and high-achieving school, and to eliminate a century-old system of admitting students based on academic performance.

López was elected to the board in 2018 at the age of 28, the youngest person ever elected to the San Francisco school board. She now faces the possibility of having to fight a recall campaign that has just been launched against her and two other board members by parents angry that schools are not being opened. A political action committee has been formed, and it began circulating a petition on Friday. So far 1,200 signatures have been gathered, according to this San Francisco Chronicle report — but with still a long way to go to collect the 70,000 signatures it still needs.

López indicated that she would not comment on the matter again until San Francisco schools are reopened, without defining what level of reopening she was referring to. “We will not be taking valuable time from our board agendas to further discuss this, as we need to prioritize reopening,” she said. All meetings regarding renaming will be canceled, and plans to rename schools will be revised “to run a more deliberative process” that would include historians from local universities.

At the same time, López did not indicate that she would back down from renaming some or all the schools on the list it approved less than a month ago. Rather, she said, the board would be “working with educators at all levels to involve and educate our school communities about the renaming process … We are realizing, especially now, it will take time and energy to get that right.”

In an extended interview on the topic in the New Yorker magazine last month, she said the renaming should be viewed “as an opportunity to uplift other people, other movements, other names that are normally not seen.” “Very simply…I don’t think it’s appropriate to have symbols of racism and white-supremacy culture,” she said, referring to the offending school names.

López’ backtracking on the renaming issue has echoes of a decision made in August 2019 by the board to destroy a Depression-era mural at George Washington High, which is one of the schools on the renaming list. The mural included images of slaves on George Washington’s plantation, and a life-size representation of the dead body of a Native American.

In the face of yet another controversy, then-school board President Steven Cook reversed course after getting what he described as “much more input from the public.” He proposed that instead of destroying the mural, which he had voted to do just weeks earlier, it should be covered up — albeit at a potential cost of nearly $1 million. That’s what the board then voted to do. “I think we all agree that the mural depicts a history of the country that’s hard to see,” he said.

Nearly 18 months later, the mural remains uncovered, as has been the case during the 80-plus years since it was painted.