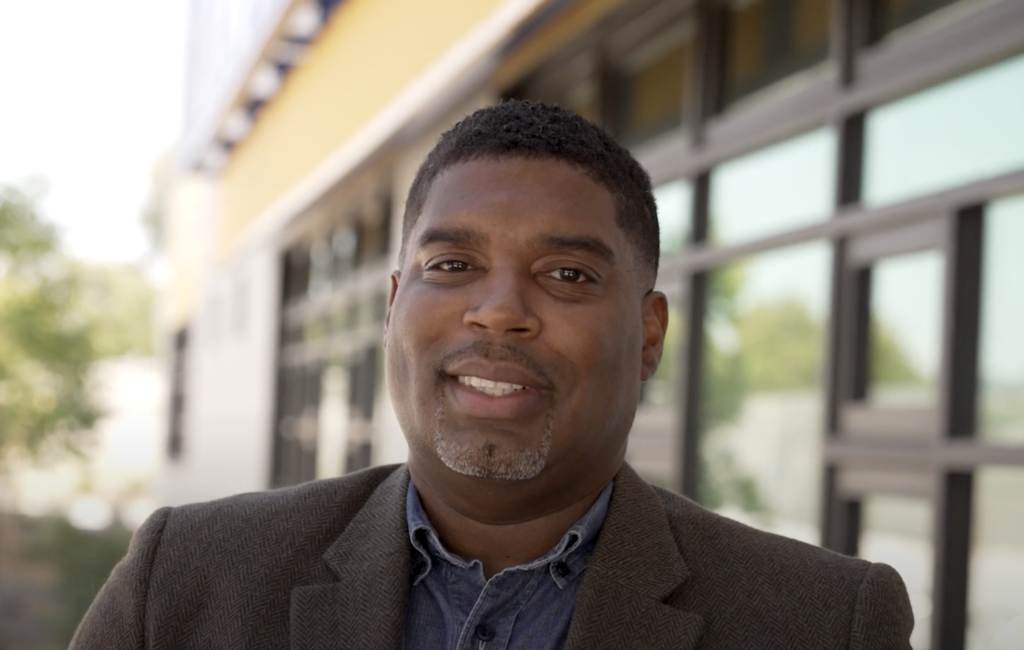 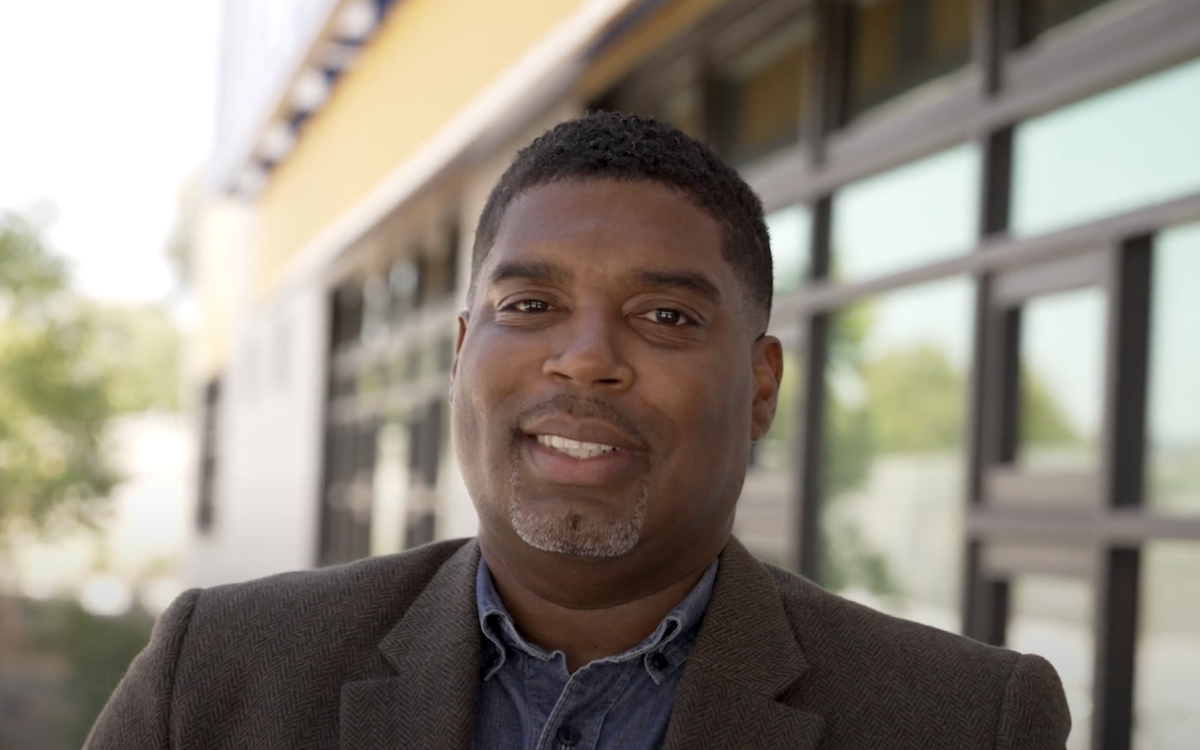 Christopher Nellum became the fifth executive director earlier this month of the Education Trust-West — one of the state’s most prominent social justice and advocacy organizations — which is celebrating its 20th anniversary this year.

Nellum received a bachelor’s degree in political science from University of California, Santa Barbara; a master’s degree from California State University, Long Beach; and a doctorate from the University of Michigan. He and his wife, Alexis Jackson, an Oakland native who is a marine conservation scientist and ocean policy advocate at The Nature Conservancy, are parents of a 2-month-old daughter, Ava. They live in Oakland.

Nellum, 38, grew up in the Imperial Valley city of Brawley. The conversation has been condensed and edited for brevity.

EdSource: I’m curious about what took your family to the Imperial Valley?

Nellum: My stepfather was a correctional officer. There are several prisons in the valley. Besides agriculture, prisons, unfortunately, are our industry. That’s how we ended up there.

EdSource: What kind of education did you get at Brawley Union High School, and how did it influence you?

Nellum: Brawley’s a wonderful place. I had wonderful teachers and interesting experiences as one of the few Black people in the Imperial Valley. It’s mostly Mexican Americans with some white folks there. But when I think about the barriers that I faced, students today are still facing the same barriers decades later. For my last math class, a few of us were allowed to take an online statistics course from UC Berkeley. In hindsight, I now know that it’s called dual enrollment, but I didn’t know then that’s what it was. I was getting college credit, but it was really to allow me to qualify to be UC-eligible, because the course wasn’t readily available to other students. That was an unfortunate reality of where we were.

Going to college from where I’m from means going to Imperial Valley College, the local community college. I thought I was going to IVC, which is a fine place, until the counselor, Ms. Hardy, sat me down and said, you need to think about other options. I think she saw I had promise. She helped orchestrate many things that I wouldn’t have known. She helped me complete my FASFA (the Free Application for Federal Student Aid, the form students must fill out for any federal financial education assistance) and helped me get into UC Santa Barbara, which was not part of my thinking at the time. Kids deserve to understand their full set of opportunities. My experience was based in large part on luck. I wouldn’t have had that choice if I wouldn’t have had that moment with Ms. Hardy.

EdSource: So, I can understand why you’re fervent that all students be required to fill out the FAFSA. (That requirement, to be eligible for financial aid for college, is included in the “trailer bill” that details the 2021-22 state budget that Gov. Gavin Newsom signed this month.)

Nellum: Yes. If we’re going to say we’re preparing young people to go to college, we have to help them understand the cost of college. We should make sure that young people have access to all A through G classes (required to be eligible for admission to CSU and UC), financial aid forms and the same support in school. When we leave those things to local decision-making, or we leave it vague, that’s when folks fall through the cracks. If students need extra counseling or tutoring, because of whatever happened before high school, then schools should make that available. We’re a state of immense resources. Let’s make sure those things are available to all students.

A through G has been a priority for the Ed Trust-West for years. We need to be fierce about that and figure out how, why, when and under what circumstances A through G as the default curriculum works. We need to be better at getting districts to tie budgets to A through G, and getting the community to provide input to the LCAP so that A through G remains an urgent priority. (The LCAP, or Local Control and Accountability Plan, is the annual plan that spells out how districts will spend state funding under the Local Control Funding Formula.)

EdSource: Ed Trust-West has a three-year strategic plan. What are the one or two important priorities?

Nellum: On the early ed side, a big priority has been the expansion of transitional kindergarten, prioritizing TK classrooms in schools that serve more children from low-income families, which we are pleased to see included in this year’s budget. We were very clear with the governor that we wanted a 10-to-1 student-adult ratio rather than the much larger ratio that was proposed initially. We want to see that rollout happen on schedule.

We’re focused on the math framework that the state is reviewing now. We have been really engaged on providing feedback to the Instructional Quality Commission and the state board. There’s a long list that our coalition has asked for, including integrating English language development instructional strategies and culturally relevant instruction. They’ve adopted about 70% in the current draft of the framework.

I’ve been leading our work in the rollout of the state’s cradle-to-career data system for four years now. I participated in the data system work group, and the governor put me on the policy and advocacy work group. In 2019, we issued a set of principles for designing the system and have seen a vast majority of those adopted. We’re excited to see funding committed for the data system infrastructure and data tools families and students will be able to use.

In higher ed, we’re very committed to getting rid of developmental education classes, making sure that the CSU and the community college system actually get rid of remediation. Both systems are prioritizing co-requisite education instead. We must ensure that our colleges and universities have the resources to remove an obstacle that disproportionately affects Black and Latino students.

EdSource: What directions would you like to see Ed Trust-West take?

Nellum: This is our 20th year. There’s been lots of emphasis from my predecessors on growth and stability, and sometimes that has inadvertently played into the sort of nonprofit industrial complex. One thing I want to be clear about is Ed Trust-West doesn’t have to be the biggest or only organization. The issues are so big, so entrenched that no one organization should try to take on funding or racism or any of those issues alone. We do have to be one of the important players.

We need to have some specific, sustained conversations about individual racial and ethnic groups because we’re actually doing a disservice to our mission by lumping low-income students and students of color together in the ways they have been. Needs are not the same across racial groups.

If we’re trying to sustain a movement, trying to get folks really engaged in our work, then we have to help folks see their communities and their issues represented in a real way. So we’re going to be doing some more drilling down for specific racial, ethnic groups in our policy work.

EdSource: When you talk about equity as the focus of your report on re-imagining schools post-Covid, what does that mean to you?

Nellum: We really want districts to reengage families in different and meaningful ways, to empower their teams (of teachers and principals) to actually make decisions. I want folks to think about how to make teaching and learning more relevant in the ways that make sense to young folks.

That’s what is driving how we do that technical assistance with districts that invite us in every year.

EdSource: One challenge is to let people know who is wisely spending all of the money going to schools this year. Is that a concern of yours?

Nellum: There’s a constant chorus in the state about whether funding is adequate. My concern is what could happen if folks will look back on this infusion of mostly one-time monies and say, “You education folks often say you need more resources,” and we won’t have anything to show for it; that is certainly on our minds. We have to figure out how we hold folks accountable for reporting what they’re doing, what they accomplished.

EdSource: Ed Trust-West has been around 20 years. Looking back and ahead, not to misquote MLK, but is the arc of education bending in the right direction?

Nellum: We’ve made a lot of progress. LCFF, the Local Control Funding Formula, is a huge progress. The student-centered funding formula recently adopted by the community college system, although contentious, is a huge progress, too. There are more districts now offering the full sequence of A through G courses. We have improved policies that made transferring from community colleges to our four-year public colleges easier or more direct. We now have a proposal to make TK universal. Unfortunately, there’s still work to do on our educator workforce; it’s not as diverse as it should be in a state as diverse as California. We’re not anywhere near where California can or should be in funding to education. But we’re making progress.

The infusion of money is great. But it’s also about how we spend. A number of really amazing, equity-centered decisions were made in this budget.