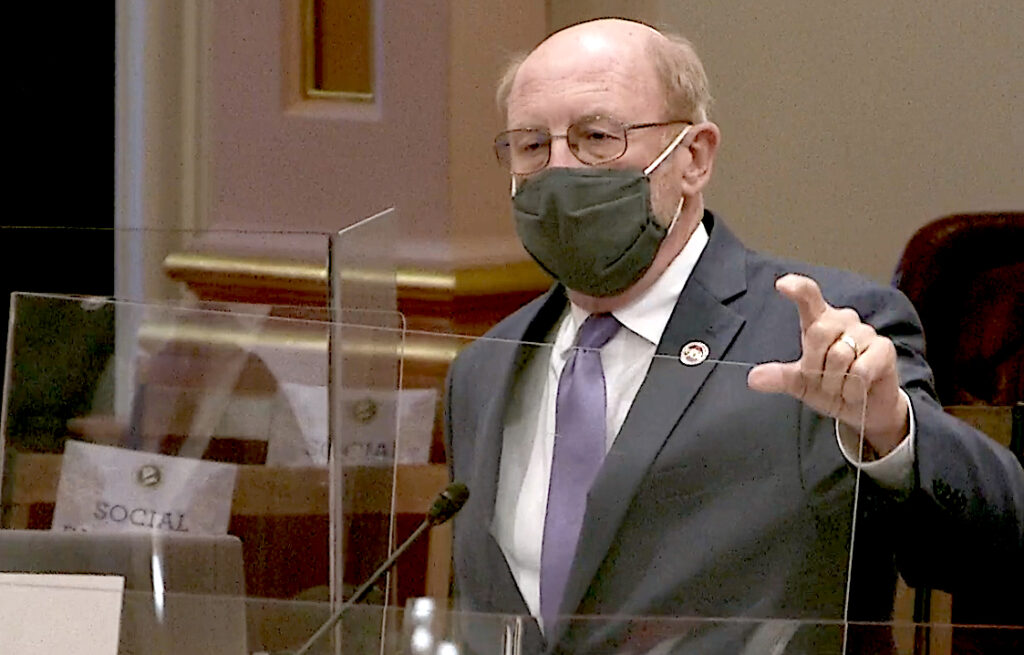 Credit: senate.ca.gov
Sen. John Laird, D-Santa Cruz, who was involved in budget negotiations, praises the final bill on the floor of the Senate on Monday nights.

Credit: senate.ca.gov
Sen. John Laird, D-Santa Cruz, who was involved in budget negotiations, praises the final bill on the floor of the Senate on Monday nights.

With brief but exuberant praise from Democrats and often acerbic criticism from Republicans, the Legislature dispatched the 2021-22 budget bill with spending levels for education that appeared implausible a year ago, in the throes of a pandemic. The vote – 61 to 12 in the Assembly and 31 to 5 in the Senate, with several Republicans not voting – sends a $263 billion budget to Gov. Gavin Newsom, who agreed to the deal on Friday following nearly two weeks of negotiations.

(Go here for the Assembly’s summary of the budget, released on Monday.) 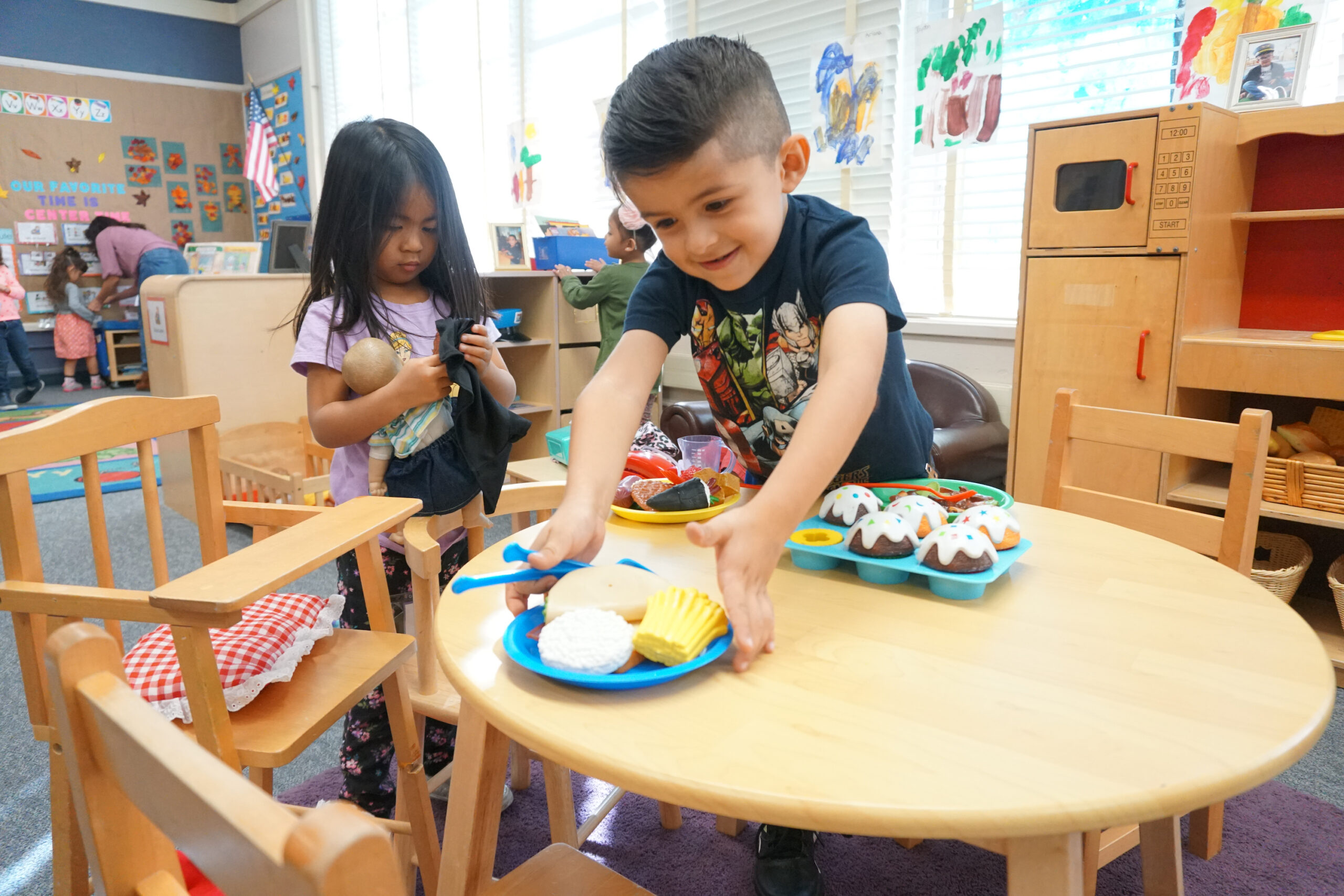 “We have a responsible, fiscally prudent budget. We responded to the public. We go after the problems that have been intractable for so long and budget for impact,” said Sen. John Laird, D-Santa Cruz, who had served in the Assembly during the Great Recession, when the Legislature faced massive cuts in state revenue. “We’ve been waiting for decades to have student aid that helps people. We’ve been waiting to restore our schools financially. I don’t think anybody has had a budget like this in front of them for a generation, if not longer. We should be proud of this budget.”

Republican Sen. Scott Wilk of Santa Clarita agrees it was “historic” if measured “in the opportunity we have lost.” He called it a budget of “Band-Aids and buy-offs that is not investing in ordinary Californians.” He, along with other Republicans, chastised Democratic leaders for refusing to address structural failings in state government and ignoring Republican solutions: spending more on wildfire prevention and reservoir construction, assistance for small businesses and further reduction of state debt, including $27 billion in unemployment benefits borrowed from the federal government. “We were shut out of the process,” he said.

The budget year beginning July 1 significantly expands child care, adds universal transitional kindergarten for 4-year-olds over the next five years and creates the nation’s first free breakfast and lunch for all students, starting in 2022-23.

For higher education, the budget adds $173 million in ongoing funding for the University of California, $186 million for the California State University and $371 million for community colleges. It eliminates the age cutoff for Cal Grants, and it expands the Middle-Class Scholarship program to cover the total cost of attendance for lower- and middle-class UC and CSU students starting in 2022-23. (Go here for more on budgets for higher education.)

The budget also takes K-12 funding to new heights, while establishing “unprecedented state reserves” of $25 billion, Laird said. That will include, for the first time, $4.5 billion in a rainy day fund for K-12 schools and community colleges.

With the current fiscal year nearly at an end, funding for K-12 schools and community colleges is projected to exceed what the Legislature had budgeted for 2020-21 by a third, providing billions of dollars that will be rolled over as one-time funding to mitigate the impact of the pandemic on students’ mental health and setbacks in learning. It will also be enough to pay off $11 billion in late payments districts received this year, called deferrals.

Barring a recession, state revenues could easily surpass the levels projected in the new budget. The 2021-22 funding for Proposition 98, the formula that determines funding from kindergarten through two years of community college will be $93.7 billion – only $300 million more in revenues now estimated for 2020-21.

“There no question that, with a robust economy, the governor and Legislature are taking a surprisingly conservative approach,” said Kevin Gordon, president of Capitol Advisors Group, an education consulting firm.

On top of state funding, school districts and charter schools will have an additional $24 billion to spend over the next several years in federal Covid assistance, which Congress approved in three bills from March 2020 to March 2021.

Next year’s budget will include more money targeted for schools with high concentrations of low-income students and English learners. This will include $1.1 billion to hire additional staff to reduce class sizes and provide more counselors and custodians. Other expenditures will include:

“Taken together, these investments represent a monumental win for low-income students of color, their families and schools,” said John Affeldt, managing attorney for the nonprofit law firm Public Advocates. “With the record amount of state and federal funding going to school districts this year, communities, educators and advocates will have an extraordinary opportunity to re-imagine and rebuild our public education system and redress deep-rooted inequity.”

Meanwhile, advocates for early education are celebrating the earmarked funding that will expand early childhood education by establishing universal transitional kindergarten for all 4-year-olds, pandemic recovery stipends for child care and preschool providers, an increase in payments for child care providers and more.

Child care pay rates in particular have been a sticking point during negotiations.

On Friday the union Child Care Providers United announced that they had reached an agreement with the state to give providers at least a 15% increase through June 2023 along with $40 million for education and training.

“There was a clear commitment that the rate increases would be part of the final deal, which is so critical because this is a workforce. The child care workforce, primarily women of color, has been dramatically undercompensated,” said Ted Lempert, president of Children Now, a research and advocacy group. “These rate increases will be an important step towards having it be a respected profession that it needs to be.”

The Legislature, however, must ratify the CCPU contracts, which will include the finer details on wage rates.

“There’s no way we can expand the child care system unless we can attract more people and stronger providers. We can’t do that without higher wages. So that does remain pivotal,” said Bruce Fuller, professor of education and public policy at UC Berkeley. “Since the federal creation of Head Start, there’s never been a single year like this. … You’ve never seen anything like that before. It’s a very big deal.”

One critical issue yet to be decided is the future of remote learning. New regulations will be included later this week in a comprehensive trailer bill, which will spell out policy implications and details on education spending in the budget.

Newsom and state lawmakers have said they expect schools to return fully this fall for in-person instruction and that they will not renew the one-year distance learning bill. But with pandemic concerns still reverberating throughout the state, some parents and students, especially those who are medically vulnerable, aren’t ready to return to normal.

More than 40 of the state’s 1,000 districts have moved ahead with plans to create virtual academies as alternatives to in-person learning this fall. But questions remain around how these plans might affect funding based on in-person attendance — whether families would be able to return to in-person after choosing independent study, and other independent study regulations for the upcoming year.

In June 2020, California passed a law that waived some in-person requirements for 2020-21 while also establishing rules aimed at improving the quality of distance learning during the pandemic. Now, a coalition of education and equity groups is urging the state to boost standards this school year for independent study, which has been criticized for a lack of accountability.

“We all want the default program to be in-person learning, but there are many families who have been tragically impacted by this virus, and they are scared, especially those with little kids who aren’t vaccinated,” said Shelly Spiegel-Coleman, a strategic advisor for Californians Together, a statewide education advocacy organization. “There needs to be an alternative for this year, and it needs to be better than what we did before.”