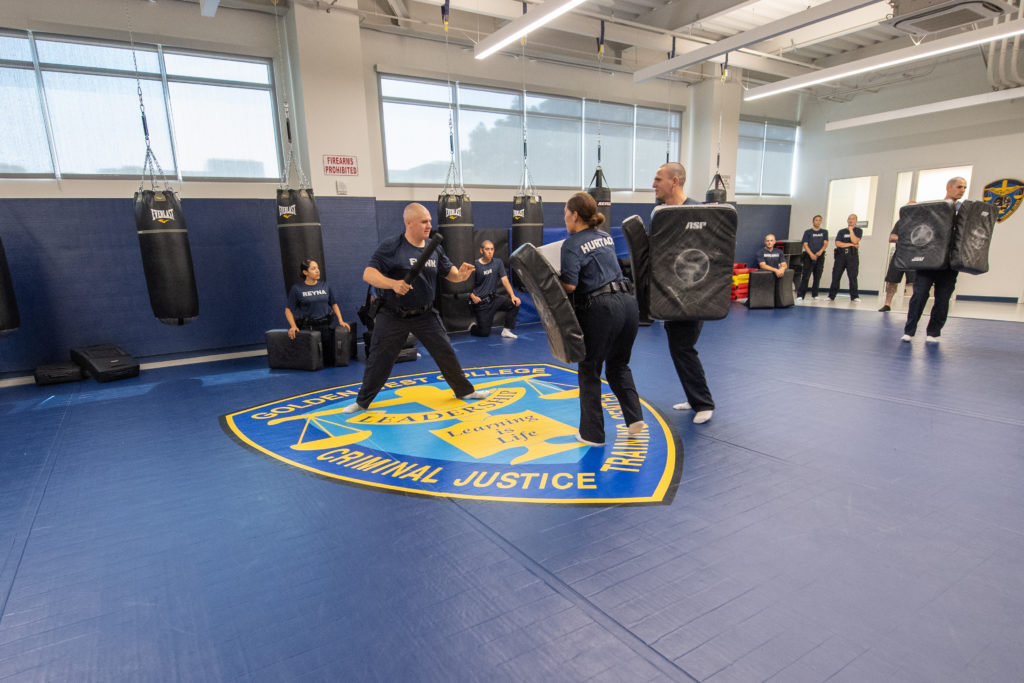 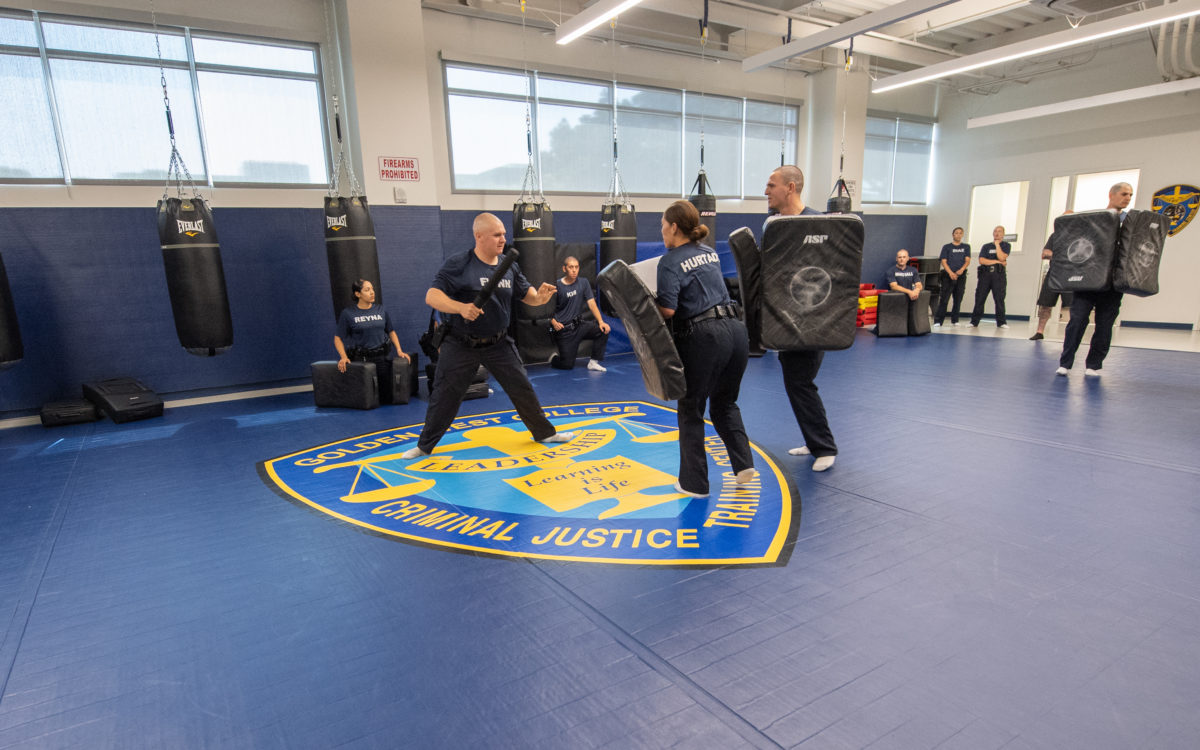 George Floyd’s murder nearly a year ago is changing how California’s community colleges and state universities train and educate police officers with urgent emphasis on treating people humanely and using deadly force only as a last resort.

“Everybody’s seen it,” Vu said of video showing Chauvin’s knee pressed into Floyd’s neck for more than nine minutes. “They are images that I don’t think any of us will ever forget. I certainly hope that our police recruits won’t forget that.”

But controversial killings of people by police continue, raising questions about training and officer conduct. Among the most recent is the April 19 death of an unarmed 26-year-old Latino man in the city of Alameda that’s roiled the Bay Area.

Responding to a call of a man in a park who appeared intoxicated, police attempted to restrain him. Body camera footage shows officers knelt on Mario Gonzalez’s back for several minutes. Gonzalez became unresponsive and died. His family has called his death a murder similar to Floyd’s. Multiple agencies are investigating.

Nationwide, the focus has turned to whether changes are needed in how police are trained, what they are taught and even who can apply for the job. More than 11 months after Floyd’s death, those questions have taken on a renewed focus in California higher education, where thousands of police recruits and officers are trained yearly.

Across the state, there are 20 police academies on community college campuses run in conjunction with the California Commission on Peace Officer Standards and Training, known as POST. Many are adding new classes and training, officials said.

Once they are sworn in as police officers, many pursue college degrees in criminal justice and criminology, which are offered at 20 of the 23 California State University campuses.

One of the most significant changes occurred in June when Gov. Gavin Newsom banned police statewide from using and being trained to use carotid restraints, sometimes called chokeholds. They’re designed to restrict blood flow to the brain and render a person briefly unconscious. But they can turn deadly.

Last year, the city of Pittsburg in Contra Costa County settled a lawsuit last year for $7.3 million with the family of Humberto Martinez Sr., 32, who ran from police after a traffic stop in 2016. He died after an attempted carotid hold caused “extensive hemorrhages” in his throat, a coroner found. The officer involved said that he’d tried to cut off the victim’s airflow, not the blood flow to his brain, raising questions about his training.

State Community College Chancellor Eloy Ortiz Oakley called for rethinking of police training last year when he issued a social justice “call for action.” It resulted in an ongoing review of training curriculum to make sure that the experiences of people of color are prominently taught. Some schools like Fresno City College are considering course changes recommended by a local task force.

“It’s critical that we as educators of first responders examine our curriculum and ensure that it is culturally relevant and responsive to concerns about policing,” Oakley said.

Some of that is focused on teaching recruits to simply think differently. Vu has mandated that Golden West recruits visit Los Angeles’ Museum of Tolerance.  It’s dedicated to the Holocaust and combating “all forms of prejudice and discrimination.”

Police “have to understand that racism exists and what its impact is on society,” Vu said. “Exposing them to the harsh reality of racism is important.”

In addition to the community college academies, some officers are trained by large police agencies like police departments or county sheriffs and receive certification from POST after graduating and undergoing field training.

Teaching how to peacefully de-escalate encounters with people “will be a central piece in training moving forward,” Vu said.

“It means moving away from the message that police are warriors and that they need to be prepared to kill anyone they encounter,” Sklansky said.

California had already incorporated implicit bias and cultural diversity in its police training curriculum. Vice President Kamala Harris pushed for the training in 2017 when she was state attorney general.  “Every human being has implicit biases,” Harris said at the time the course was introduced after several years of being tried out in police agencies across the state.

Many of California’s standards of police training on the use of deadly force are set by state law.

In deciding what to teach new recruits, individual academies can add to POST’s basic curriculum of 664 hours of training. Most require another 216 hours that is decided at the local college and can be responsive to current events.

Brian Vizzusi, a retired police lieutenant who heads the academy at Yuba College, north of Sacramento, added training to address the Minnesota shooting death earlier this month of Daunte Wright, 20, by a police officer who claimed she was reaching for her Taser rather than her gun.

Police have a history of mishandling Tasers. At least 11 similar incidents have occurred nationally since 1999, including the 2009 killing of Oscar Grant by a BART police officer in Oakland when Grant was handcuffed and lying on a train platform.

Taser training is done by departments after recruits leave the academy. Vizzusi recently devised a way to include it in the curriculum to help officers avoid fatal mistakes.

Cadets will be given a device similar to a stun gun to wear on their belt and a trainer will yell “gun” and “Taser” as the trainees practice drawing each weapon. That will “build muscle memory” to help the future officers avoid mistaking a gun for a Taser in a stressful situation.

San Joaquin Delta College also recently created new classes to have recruits “dive deep into cultures and have them get out of their seats and go out and interview people in the community,” said Tammie Murrell, a former officer who directs the college’s academy.  It will help new officers understand that relationships between police and some groups need to be repaired by “kind of a reconciliation.”

As teaching materials improve, California’s requirement to become a police officer remains unchanged. All that’s needed is to be 18 years old and have a high school diploma.

Only a few states, including New Jersey and North Dakota, require bachelor’s degrees. Some mandate 60 hours of college credits or two years of military service.

In the wake of Floyd’s murder, the requirement should be raised, said Thomas Nolan, a former Boston police lieutenant-turned-academic who teaches at Emmanuel College in Boston. He’s the author of the book “Perilous Policing,” which argues for reforms in how police interact with marginalized communities.

There is long-standing disagreement, however, on whether requiring a four-year degree would improve policing. The idea was first proposed in 1967 by a commission President Lyndon Johnson appointed.

Nolan argues that Chauvin and other officers involved in unjust killings were “ultimately bad hiring decisions.” A four-year degree requirement might have weeded them out. Chauvin, according to news reports, has an associate degree.

College-educated cops “are likely to have the capacity for analysis in seeking solutions to problems,” Nolan said, “understand reasoned argument and perspective” and be able to “acknowledge racism, misogyny, homophobia, and discrimination in our criminal justice system and the larger society.”

Assembly member Reggie Jones-Sawyer, D-Los Angeles, introduced legislation last year requiring future police recruits to have a bachelor’s degree or be 25 years old to become a cop. The bill remains pending in the Assembly. Studies have shown that being college educated helps officers better deal with stress and control their behavior. Opponents say the degree requirement narrows who can become an officer when communities are seeking to diversify their ranks.

Abdul Pridgen, the California Police Chiefs Association’s president, said neither a person’s age nor education level will show “whether or not a person has the mental acuity or maturity to be successful.” Potential officers need to be evaluated for employment on a “case by case basis,” said Pridgen, who is the chief in Seaside, Monterey County.

Binnall brings a unique perspective to his work: He spent four years in Pennsylvania prisons for being at the wheel in a 1999 DWI crash that killed his best friend.

“I’ve seen the system from both sides,” he said, a message he gives students, telling them “the people you are coming in contact with are human beings.”

“I don’t think things are going to go back to the way they were,” he said. Some of the changes we are seeing right now are going to stick and become part of criminal justice curricula going forward.”

At Yuba College’s academy, 36 fledgling officers who graduated on April 27 seem to have gotten the message. Each class picks a motto, usually a military-type slogan like “iron forges iron,” academy director Vizzusi said. This year’s motto: “Be The Change.”