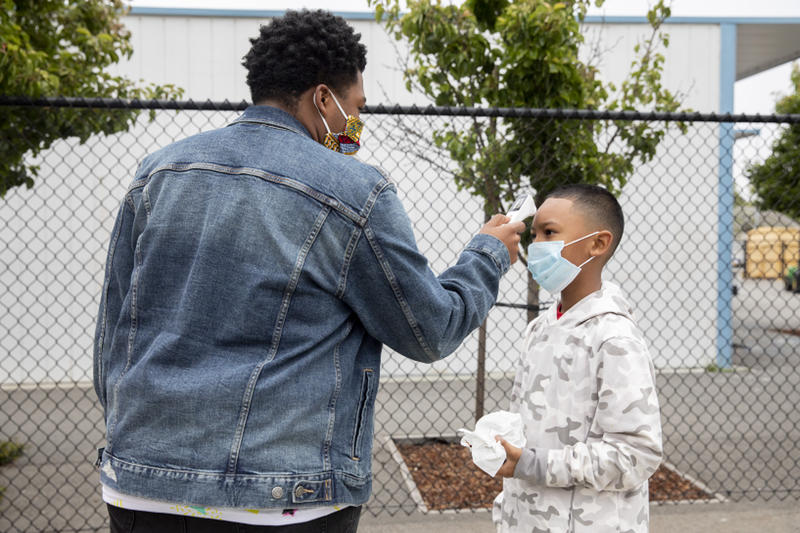 The plan calls for in-person instructional “interventions,” which the group says won’t suffice

A tentative agreement reached Friday between West Contra Costa Unified and its employee unions to offer limited in-person instruction beginning April 19 has a local parent group fuming as other districts throughout the state begin to bring students back into classrooms.

The 30,000-student district in the San Francisco Bay Area includes the communities of Richmond, El Cerrito, San Pablo and Pinole.

Rather than a full or even half day of in-person instruction, the plan calls for daily in-person “interventions,” with students arriving in the afternoons and being given academic and social-emotional support. In addition to academic programs for all grades, the district will also offer programs and counseling for social-emotional learning, which is based on helping students develop emotional skills like self-awareness and navigating healthy relationships vital to success in school and life.

The unions, in a letter to the school board sent Tuesday evening, said they would be willing to expand the plan to also offer interventions from 8 a.m. to 10 a.m. four days a week, and to participate in a “learning hubs” pilot open to all students starting April 19. But that’s only if the board votes to approve the current plan.

“We hope that the board is truly interested in providing in-person support to students as soon as possible,” the letter said.

The agreement points to the wide variations in how “in-person instruction” is defined in districts throughout the state — and the conflicts they can trigger.

West Contra Costa Unified’s agreement states that distance learning would still be the “baseline” learning for students, and that the interventions would be “supplemental.”

The parent group, WCC Safe Open Schools, is calling on school board members to scrap the plan and return to the bargaining table. The group says it is also considering suing the district if the current plan is approved. Members of the group, some of whom are attorneys, sent a letter to the district Monday claiming the plan would go against the district’s duty to offer in-person instruction “to the greatest extent possible” as required by the state education code. The requirement was included in legislation (AB-77) enacted by the Legislature last June.

The district’s plan calls for in-person “interventions” for cohorts of up to 10 students from 2 p.m. to 4 p.m. on Mondays, Tuesdays, Wednesdays and Fridays, while students will continue to get classroom instruction via distance learning for the rest of the day. The district would also offer in-person social-emotional learning activities from 2 p.m. to 4 p.m. on Thursdays and 11 a.m. to 2 p.m. on Fridays.

High-needs students would be first in line for the interventions, and the district would be reaching out to their families to offer the program to them. Teachers would only have to participate in the program if they volunteer, and they would have to be fully vaccinated first.

In a newsletter to its members Friday, the district’s teachers union, the United Teachers of Richmond, said the plan represented the needs teachers had expressed to their union leaders. The plan includes strong safety protections and supports highest-need students first, they added.

Superintendent Matthew Duffy, however, is not enthusiastic about the plan as it stands.

“Personally, I don’t think the agreement goes far enough to get students into schools for more time,” Duffy said in an interview with EdSource. He added,“I believe any teacher or staff member who wants to come into our schools to work voluntarily with students during the school day should be able to do so. However, based on direction from the majority of our school board and the state of negotiations, this was the agreement we were able to come to.”

School board President Mister Phillips said via email that he agreed with Duffy that the plan doesn’t go far enough and believes an outside mediator is needed in the negotiation process.

“It is basically an after-school program. That is not right,” Phillips said. “We need a mediator in here. The system is not working for kids.”

The unions, in their letter Tuesday evening, said if the board rescinds the tentative agreement it will take even longer to get students back in classrooms.

“We are deeply concerned that if the board does not ratify the agreement at Wednesday’s board meeting and instead attempts to re-bargain the entire agreement using mediators, lawyers, or imposition that the end result will be adversarial and protracted negotiations that limit the ability for us to do what we all want most — bring students back on campus in a timely fashion,” the letter said.

Ernesto Falcon, a father of a West Contra Costa Unified kindergartner and one of the attorney-parents who wrote the letter to the district on Monday, said offering in-person instruction should be the district’s “default” position, since it is allowed under the state’s Covid-19 safety guidelines. The letter argued that not offering in-person instruction “to the greatest extent possible” would violate the California Education Code, as well as other potential grounds for litigation.

The letter also warned that the district’s plan likely wouldn’t go far enough to qualify for funds from the state’s $2 billion initiative offering financial incentives for schools that open for in-person instruction this spring.

District officials, however, believe the plan does meet the criteria for the program, as long as enough teachers volunteer to meet the demands of students who choose to return.

The West Contra Costa parent group also cited the prioritization of African American students in the intervention plan as grounds for a lawsuit, claiming that it would violate civil rights laws to single out one race of students despite disparities in the effect of distance learning on Black and brown students. African American students make up 16% of the district’s enrollment and are the second-largest racial group in the district.

The letter also challenged the need for the mandatory asymptomatic testing of students under the plan.

Falcon said the group has not yet secured a law firm to represent them in a potential lawsuit.

“I don’t think a lawsuit is in anyone’s interest necessarily, but it’s clear that many kids are not getting access to the education they need,” Falcon said.