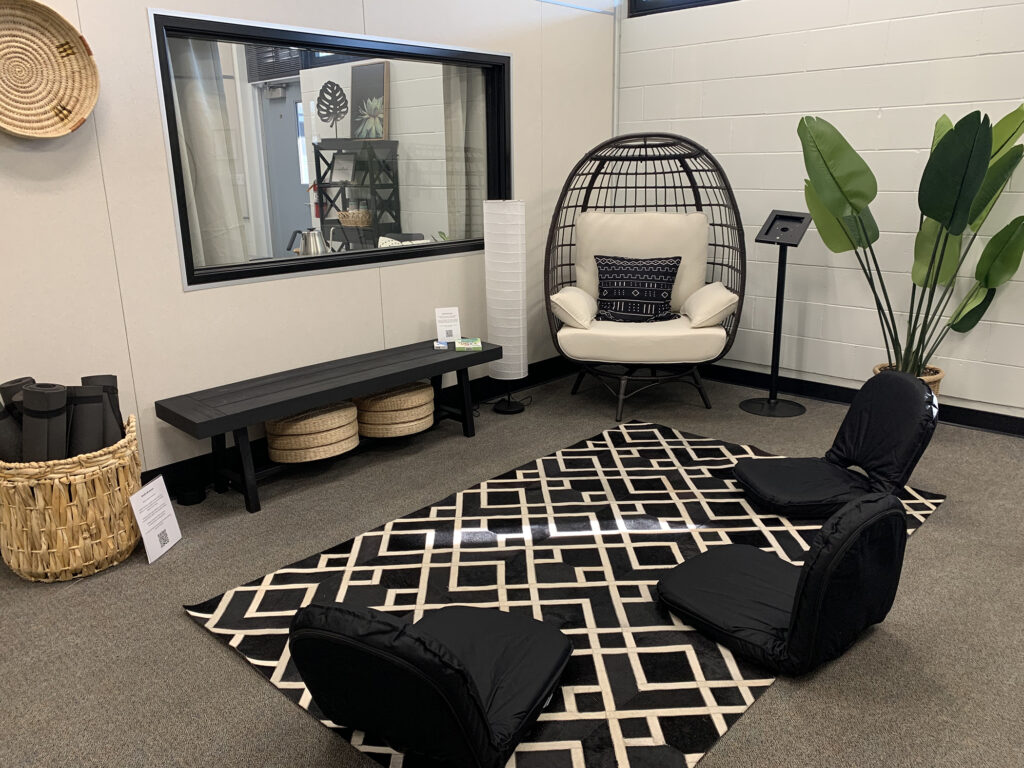 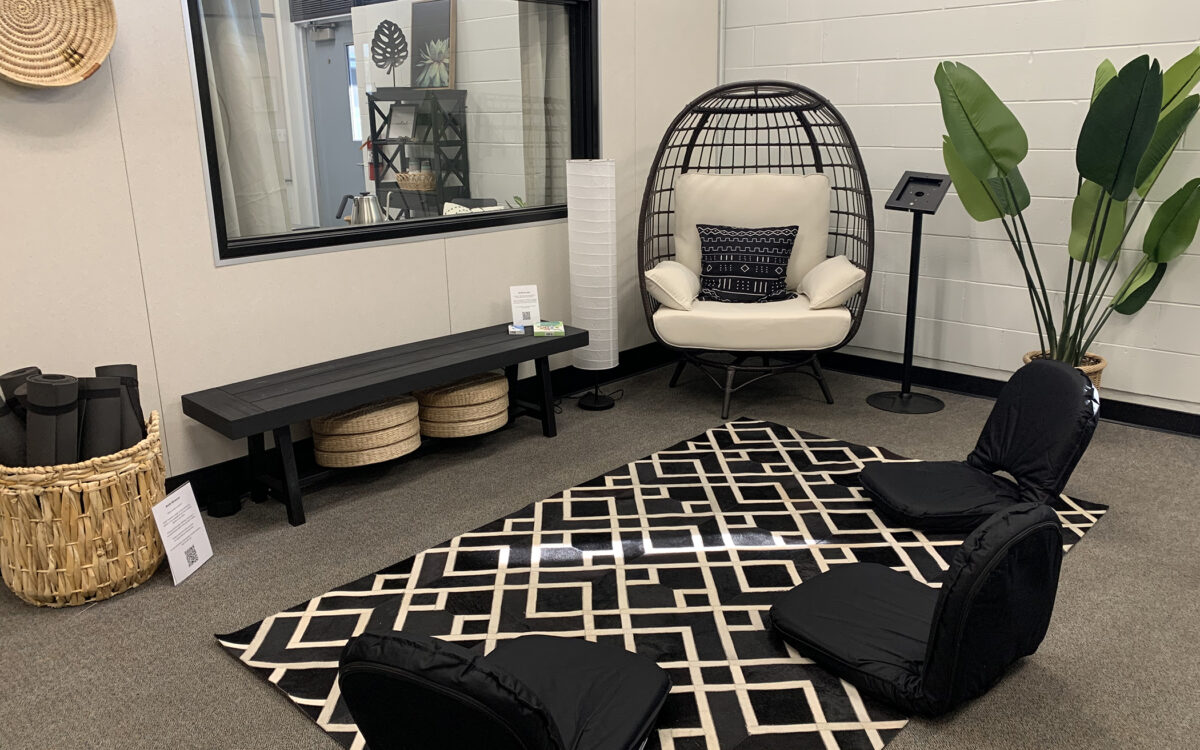 Courtesy Orange County Department of Education
The well space at McAuliffe Middle School in Los Alamitos is meant to be a quiet, comfortable place for students to relax.

Courtesy Orange County Department of Education
The well space at McAuliffe Middle School in Los Alamitos is meant to be a quiet, comfortable place for students to relax.

Faced with rates of adolescent suicide and self-harm that have been among the fastest-rising in the country, schools in Orange County have teamed up with a local hospital to boost mental health services on campuses.

The partnership between Children’s Hospital of Orange County and the Orange County Department of Education will include a streamlined connection between the schools and the hospital system, and “well spaces” on every campus where students can visit counselors, do yoga or meditate, and generally relax.

“This is a passion for us. We get teary-eyed on a daily basis about this project,” said Mayu Iwatani, manager of mental health and wellness for the Orange County Department of Education. “We truly believe every child should have access to something like this.”

The youth suicide rate in Orange County increased by 11% from 2010 to 2018, the sharpest increase among the 20 most populous counties in the U.S., according to the Community Suicide Prevention Initiative. Reflecting a national trend, suicide is the second-leading cause of death among adolescents in Orange County, according to county data.

The partnership between county schools and the hospital predates the pandemic, but is even more necessary after students have endured more than a year of isolation and upheaval related to Covid-19, Iwatani said. The project formally launched in fall 2020 with the opening of two well spaces at middle schools in Los Alamitos Unified, at the northern end of the county.

Located in converted classrooms, the well spaces are meant to provide a calming refuge for students to visit throughout the day. Each is furnished with comfortable chairs, desks, snacks, water, plants, books, space for yoga and meditation, and separate offices for private one-on-one counseling. They’re furnished in neutral colors using “biophilic design” — a style of interior design meant to connect people to nature.

“It’s not just about mental health, it’s about overall wellness,” said Los Alamitos Superintendent Andrew Pulver. “We all lead stressful lives at times. Everyone needs a space where they can reset.”

Orange County has a higher-than-average median household income, with some wealthy pockets as well as some areas of deep poverty. But even with most families living in relative comfort, rates of depression among young people is high. More than 36% of 11th graders said they experience chronic sadness, and 15% said they’ve considered suicide, according to the 2017-19 California Healthy Kids Survey.

Intense pressure to succeed academically, socially and athletically — combined with the relentless pressure of social media — is one reason for the high rates of depression and self-harm, said Dr. Michael Weiss, vice president of population health at Children’s Hospital. Partly in response to this trend, the hospital is trying to take a more holistic approach to children’s health, and partnering with schools was a logical step, he said.

“We expanded our definition of health to include not just physical, but mental, emotional, social and even academic domains. And it became very clear, we need to go where the kids are. And where are they? At school,” he said.

Middle schools were chosen for the first well spaces because children that age can be especially vulnerable to stress and anxiety, and can easily become disengaged from school or experience more serious mental health challenges, he said.

Those issues have been exacerbated during the pandemic. The adolescent mental health inpatient unit at Children’s Hospital has been full for more than a year, he said.

Orange County’s first well spaces opened in August. They’re staffed by school counselors, psychologists or social workers who are available for appointments and regular meetings as well as drop-in visits. Eventually, the well spaces will include technology to offer virtual health check-ups and counseling sessions with doctors and nurses at Children’s Hospital.

Colin Eaton, an 8th grader at McAuliffe Middle School in Los Alamitos, can vouch for the effectiveness of the new well space at his school.

Since students returned to campus in a hybrid model last fall, most teachers would start class by asking each student how they’re feeling. Colin usually said, “Fine, OK.”

“Then one day, I wasn’t OK,” he said. “I had a bad day. Things weren’t fine. I told the teacher I was feeling really bad.”

His teacher suggested he visit Room 7, the school’s well space. There, he found a counselor to confide in and a quiet, relaxing place to sort through his emotions. When he returned to class, he felt calmer and more able to focus on classwork.

That was two months ago. Since then, he’s been a regular visitor to Room 7, where he’s learned strategies for navigating stress, anxiety and other challenges. His friends want to visit Room 7 now, too, he said.

“A lot of kids are uncomfortable sharing their feelings. Any place where you can go and soothe your mind is a huge plus for a school,” he said. “It’s been extremely helpful.”

It’s not a coincidence that the well spaces are located in highly visible, central parts of the campus, away from the office, said Grace Delk, director of mental health for Los Alamitos Unified.

The goal is also to reach students who wouldn’t ordinarily seek out counseling.

“We do a great job with kids who are obviously struggling — failing classes or not showing up for school,” Delk said. “But what about the kids who aren’t on our radar? We want to reach them before they get to that point.”

Along with the well spaces, the partnership includes a streamlined data system between schools’ health staff and Children’s Hospital. The idea is for health care workers at both institutions to have access to a student’s relevant medical records, which could be helpful in addressing conditions such as diabetes, epilepsy and disabilities outlined in special education plans.

At some point, the database may include students’ academic records, so doctors in the Children’s Hospital system will be able to see if a child’s grades are falling, a possible indicator of other health issues, such as depression.

About 30-40% of children in Orange County are connected to the Children’s Hospital system, which includes a 334-bed hospital in the city of Orange and about two dozen primary care clinics throughout the county. The largest children’s hospital in the county, Children’s serves high numbers of families on Medi-Cal.

In designing the well spaces, school district and hospital staff visited similar spaces in schools around the state, including Oakland, San Francisco, Napa and Los Angeles.

They also talked to plenty of students about what they’d like to see in a well space.

“We’d ask kids, what’s a safe space at your school? They said bathrooms, the nurse’s office, or ‘sometimes I just ditch,’” Iwatani said. “We weren’t getting a lot of great answers. That told us a lot about what we needed to do.”

Iwatani undertook a similar project 20 years ago when she was a middle school counselor. She reserved an empty classroom where students could eat, relax on the couch, do puzzles, read and hang out in a safe, calm space. Initially designed as an option at lunch time, students started coming in before and after school and at recess.

She’s always wanted to expand the idea to other schools. Then, when she heard that staff at Children’s Hospital had a similar plan, the timing seemed right — even more so now as students cope with grief, anxiety and other issues related to the pandemic.

“All the data points to students’ increased mental health needs, and that was even before Covid,” she said. “We’re bracing ourselves for what kids will need as they return.”