Miguel Cardona sworn in as U.S. Secretary of Education 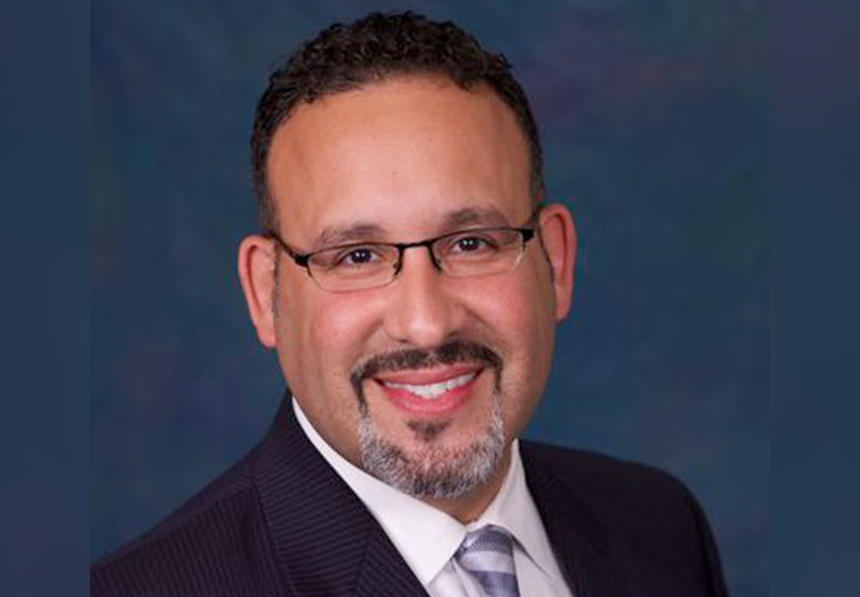 Signifying a major shift in federal education priorities, Miguel Cardona, a relative unknown on the national education landscape, was sworn in on Tuesday as U.S. Secretary of Education by Vice President Kamala Harris.

“Congratulations, Mr. Secretary, and to your whole family, and to your parents,” exclaimed Harris to Cardona and his wife and two children, the only ones in attendance. All of them wore masks.

The brief swearing in ceremony in the Eisenhower Executive Office Building next to the White House followed a bipartisan vote by the U.S. Senate after Cardona’s confirmation hearing on Monday. The 64-33 vote was a hopeful sign that at least some education issues will enjoy bipartisan support in the evenly divided Senate.

The 45-year-old Cardona will be one of the youngest secretaries to occupy the position since it was established when the Dept. of Education was created in 1980. Arne Duncan, President Obama’s secretary of education, was 43 when he took up the post.

His uncontested confirmation was in sharp contrast to that of Cardona’s predecessor Betsy DeVos, who was confirmed by the narrowest of margins. At the time, two Republicans joined all 48 Democrats in the Senate to vote against DeVos.

Vice President Pence had to cast the deciding vote — thought to be the first time in U.S. history that the vice president was needed to confirm a cabinet secretary nominee.

This time, Vice President Harris’ vote was not needed to get the nomination through, even though she will likely need to come to the Capitol to assure passage of other legislation opposed by the GOP, in light of the fact that Democrats have only 50 seats in the chamber.

Cardona’s path was no doubt eased by the fact that until a little over two years ago, he was an assistant superintendent in Meriden, Connecticut before being selected by Connecticut Gov. Ned Lamont in Aug. 2019 to be commissioner of education for the state. As a result, his positions on numerous education issues are not yet known, or at least not clearly spelled out.

As a sign of the transformed political landscape, Sen. Patty Murray, D-WA, is now the chair of the Senate Health, Education, Labor and Pensions Committee, taking the place of the former Republican chair Sen. Lamar Alexander, D-TN, who has retired.

“At this moment of crisis, Dr. Cardona is exactly the leader we need at the Department of Education,” said Murray. “He has the experience, principles and perspective that we need in this critical role.

Cardona’s first major challenge will be to implement the Biden administration’s pledge to open the nation’s elementary schools within 100 days of taking office, even though the federal government has limited influence over what states and school districts do regarding administration of local schools. Beyond pandemic-related issues, he will be the public spokesperson and advocate for President Biden’s expansive education agenda, arguably the most ambitious of any president.

On charter schools, for example, Cardona said “I recognize there are excellent examples of charter schools. I’ve seen many in Connecticut.” At the same time, he said, “I know there are also phenomenal examples of neighborhood schools that are doing just as great work.”

Regarding the issue of whether schools would be required to administer standardized tests, he demurred on issuing an answer, even though the acting assistant secretary of education has already told states tests would be required, although with greater flexibility than during a non-pandemic year.

“I don’t think we need to be bringing students in just to test them on a standardized test. I don’t think that makes any sense,” Cardona said. Yet he also pointed to the importance of the tests. “If we don’t assess where our students are — and their level of performance — it’s going to be difficult for us to provide some targeted support and a resource allocation in a manner that can best support the closing of the gaps that have been exacerbated due to the pandemic.”