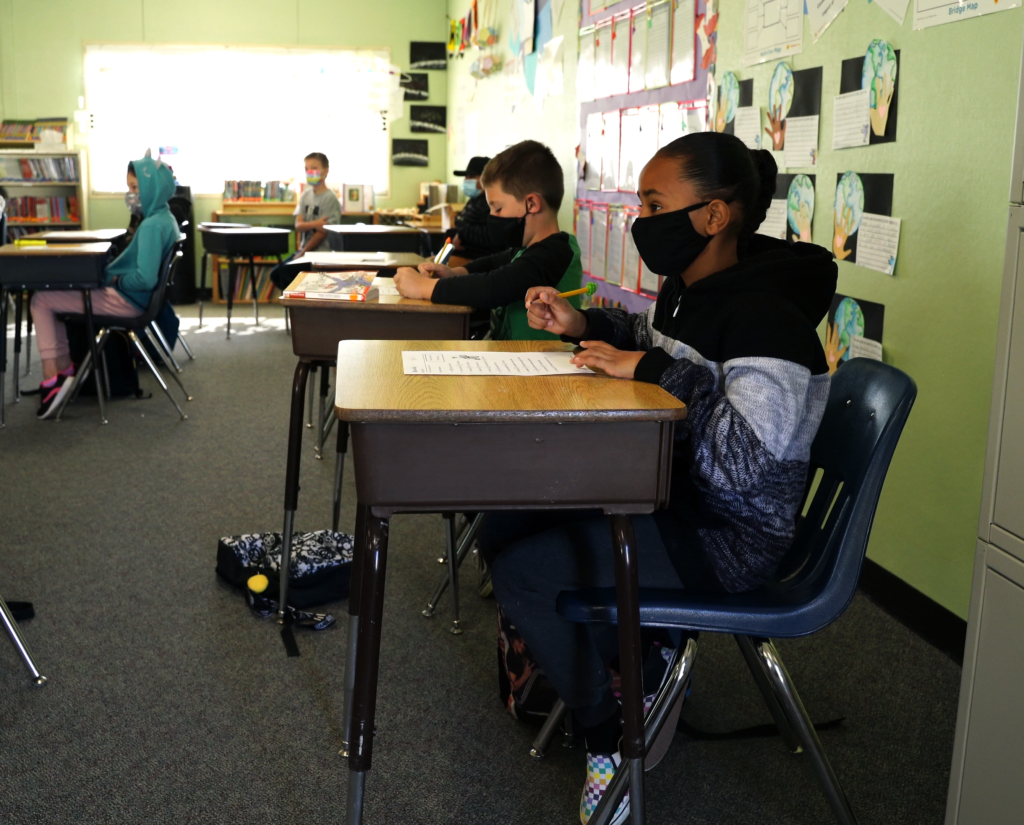 One by one, students arrived at Lucerne Valley Elementary School this week. Before entering the campus, a staff member handed masks to students who needed one. They then had their temperatures checked as they made their way to their classrooms.

One of the first districts to reopen last August in a hybrid mode, the small district in Southern California’s high desert is now among the latest across the state where all 840 students through high school have the option to attend classes in person for five days each week.

Students like Colton Reichow, a 4th grade student, were excited to finally be back on a more traditional school schedule.

“I like it a lot about because I get to see a lot of my friends,” Reichow said. “Distance learning was a lot of trouble because I couldn’t see my friends, and I had to be in school for three hours a day. I couldn’t play with my brother.”

Before this week, Reichow and other students across the district came to school for only part of the week.

Reichow’s mom, Sarah Courtney, is also relieved to have her son back in class.

“It’s very exciting. I love it,” Courtney said about Lucerne reopening full-time. “They’re physically writing again, which is great because it seemed like that really suffered on computers. Just being back in class, they learn so much better.”

Reichow and his mother are participating in an EdSource project to follow families across the state as they cope with the pandemic.

Courtney, who also has a toddler, has had to juggle being a mother, at-home tutor and student this year studying to become a nurse. Like many parents, Courtney is ready to finally have some time back to focus on her ambitions, too.

“It will definitely be easier to study without having to worry the whole time what he’s doing or getting texts from his teacher telling him to stop making noises or focus,” Courtney said. “It’s hard to study when I’m helping him do his classwork,” she said, adding that math has been a particular struggle for her son in a remote setting.

Over the next two months before students leave again for summer break, staff at the district said one of their top priorities is to help students deal with the emotional upheaval they experienced because of the pandemic. Many students have spent much or all of the last year socially isolated. The district also plans to use the next couple of months to gauge learning loss as much as possible among students and begin intervening to help students catch up, Superintendent Peter Livingston said.

“Even though it’s a very short time, and our emphasis is keeping the kids healthy and safe, every second we have counts, and we’re going to make the most of every second that our kids are on our campus,” Livingston said.

“It’s a lot of fun seeing kids back. It’s rejuvenating,” he added.

Compared to when Lucerne’s elementary school first reopened in a hybrid mode in August, some normalcy has since returned.

Last fall, kids were forced to stay distanced at lunch and sit 6 feet apart. This week, up to six students were sitting together at tables outside during lunch. They conversed and appeared to be thrilled to be with one another.

Inside the 4th-grade classroom taught by Crystal Nelson, gone are plexiglass dividers that divided students last fall when classrooms were limited to about 10 to 12 students. Now, about 20 students are in each class and can be within 3 feet of one other.

Since the beginning of the school year, enrollment across Lucerne has grown by about 6%, mostly at the elementary school. Livingston said he suspects that new families moved into the district after they saw that Lucerne was among the first to offer some in-person classes in August.

Livingston said it wouldn’t have been possible to fully reopen the district’s schools this year if not for new federal guidance that reduced the recommended physical distancing requirement within schools from 6 feet to 3 feet. California has adopted that recommendation.

“That’s what truly allowed us to expand this reopening,” he said.

Now, though, for students who are in school five days a week, the district has moved away from packets and laptops. Inside classrooms, teaching and learning is happening in a more traditional manner.

Nelson said her 4th-grade students were “ecstatic” to be back at school five days a week. Before this year, the summer break was the longest that students typically had gone without seeing their teachers and friends.

“But for these kids, it’s been a year for them since they’ve seen certain friends,” Nelson said.

Because of that, Derek Chip, who teachers social and emotional learning, said it will be important to be patient with students when it comes to their social behaviors.

In his classes, Chip said he focuses on different aspects of socializing, such as self-awareness, social awareness and responsible decision-making.

“I’m just reminding myself that these students got locked into this normative way of being where they were not socializing,” Chip said. “They’ve been sitting at home, a lot of them just by themselves, or with their door shut in the room for the majority of the day. I am reminding myself every day that we have to have more empathy, and we can’t get upset every time the students are not doing exactly what we want them to do, or maybe not interacting the way we want them to interact.”

Livingston said the district will also be giving local assessments to students and will use those to measure learning loss.

He added that the district is already planning to use additional intervention strategies next school year to address learning loss. That could include smaller class sizes so students have closer interactions with their teachers, as well as pulling more students out of classes for small group work.

“We have to fill in these learning gaps because they haven’t been in school,” Livingston said. “We need to see where they are. And we need to digest what it is that we’re going to have to really focus on academically in the 2021-22 school year.”

As California schools reopen to in-person instruction, students and families decide if it's right for them

As schools open their doors across California, life remains far from normal for families participating in EdSource's families project. Some families are opting to remain in distance learning, while in Lucerne Valley, students embrace attending five days a week.