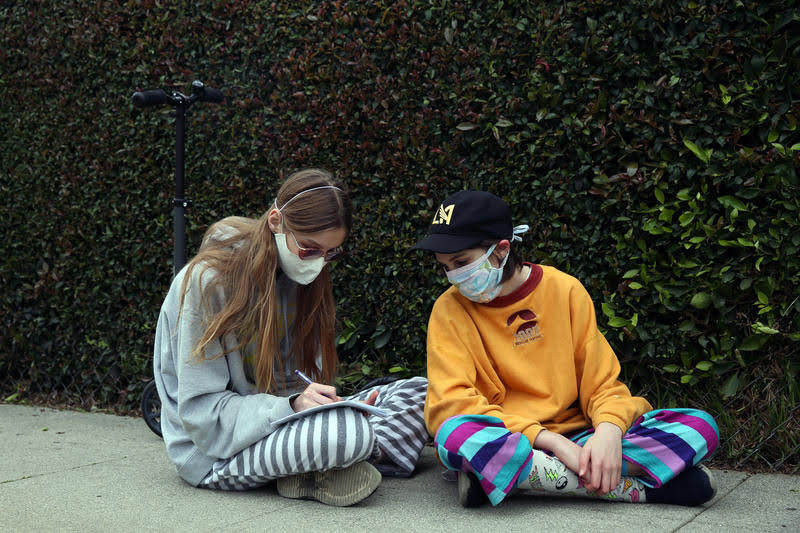 Credit: Dania Maxwell/Los Angeles Times
Face masks are among the safety requirements for schools that reopen.

Credit: Dania Maxwell/Los Angeles Times
Face masks are among the safety requirements for schools that reopen.

Before heading home for the year Friday, state lawmakers adopted a measure intended to make it easier for districts to educate students during a Covid quarantine, along with a way for districts to get funding if they can prove they tried but failed to find the staff needed to meet their obligation.

Update on the new rules

The California Department of Education produced a memo on Friday summarizing the rules governing independent study for 2021-22. It incorporates the changes to independent study in Assembly Bill 167, which the Legislature passed Thursday and forwarded to Gov. Gavin Newsom for his signature. Go here to read it.

However, the infection rate of the delta virus in coming weeks and negotiations with teachers, more than statutory changes, will ultimately determine whether school districts will be able to teach both students in the classroom and those forced to learn at home.

“We’re hopeful, and superintendents are working hard to make that happen,” but it’s premature to predict they’ll be able to,” said Michael Hulsizer, chief deputy for governmental affairs for the Kern County Superintendent of Schools. “It’s difficult, and the teacher shortage is real.”

Late Thursday, the Legislature passed Assembly Bill 167, an amended budget “trailer bill” that includes amendments to rules governing independent study that lawmakers passed only two months ago as part of the state budget. Since then, the quickly spreading delta coronavirus variant has upended some of lawmakers’ assumptions about reopening schools.

Independent study had been a rarely used nonclassroom-based education option for child actors, aspiring Olympic athletes and others with unconventional schedules. The Legislature expanded it to include it as an option for parents who are apprehensive about sending their children to school during the pandemic and added rules to ensure that schools assigned academic work and tracked students’ performance as conditions for funding. For students in independent study for a total of 15 or more days, which would include students quarantined more than once, legislators also added minimum requirements for live instruction and, for some grades, daily contact between students and a supervising teacher.

A spot check of districts has revealed that 2% to 5% of students had signed up for independent study, with a few districts as high as 10%. Some districts — especially those that started planning for independent study in July or had already intended to start virtual academies — are better positioned to meet the statutory requirement by hiring a combination of new teachers or subs. But a rise in positive infections in turn has led to a surge of Covid quarantines of students, and the closure of at least five rural schools. Superintendents already struggling with frustrated parents on waitlists for independent study now are worried they will face quarantined students who are entitled immediately to short-term independent study.

“California schools were already facing severe staffing shortages prior to the pandemic, and consequential impacts on classrooms are only exacerbating that reality,” said Edgar Zazueta, senior director, policy and governmental relations, for the Association of California School Administrators.

That association and other school organizations had hoped the Legislature would let districts revert during quarantines to distance learning under last year’s emergency regulations. Gov. Gavin Newsom and the Legislature had let the one-year regulations governing distance learning expire in June and said independent study would be the only alternative to in-person instruction that the state would fund in 2021-22.

Unlike last year’s regulations that guaranteed funding with little accountability, districts will be funded this year only if they can show that students signed an independent study contract and performed schoolwork equivalent to what is required of in-person students.

In passing AB 167, lawmakers remained resolute on running quarantines through independent study. But they did clarify confusing wording, reassuring districts they could use Zoom and other platforms for remote learning, and they made other allowances:

It’s not clear whether those funding exceptions, similar to the waivers districts receive for evacuations and closures caused by wildfires, will be readily given. But over the coming weeks, it will become clearer whether they will be needed.

Districts are considering options to ease the shortage. One is to expand the ratio of students to a supervising teacher during a quarantine. Another, which teachers and administrators agree is preferable, is for a classroom teacher to oversee independent study during a quarantine, either by simultaneously Zooming to students at home and in class, which many teachers found difficult, or by assigning work to quarantined students and meeting with them online after school.

All the options, which change working conditions, require negotiations with teachers unions over more money for added time and responsibilities or a waiver from student-teacher ratios. Districts can use some of the billions of dollars in one-time federal and state Covid aid to pay teachers for extra work and pay subs a more attractive rate.

Some districts have reached agreements with teachers, but many haven’t, and teachers unions in at least a few are using contract reopening to press for permanent raises for all teachers, complicating negotiations. United Teachers Los Angeles is demanding a 6% raise retroactive to July, a $2,500 “one-time stipend” for all full-time members and a $2,000 “technology stipend.”  The district has countered with a lower offer. The union is also demanding another school year without teacher evaluations and suspension of district-assigned standardized tests.

“The next few weeks will be critical,” Hulsizer said. “Districts need to reach agreements.”

At the same time, there are signs that child infections from the delta variant may have peaked in some counties, including Los Angeles, perhaps foreshadowing an easing of the crisis, if not a sharp decline in quarantines and the demand for independent study.

Ron Carruth, superintendent of the 7,000-student El Dorado Union High School District in Placer County, which has been walloped by the Caldor fire and the delta variant, reported Thursday that positive cases among staff and students had fallen by half from 70 cases three weeks ago.

What hasn’t dissipated, he said, is a shortage of substitute teachers and other staff, including bus drivers.

When the Legislature returns in January, Carruth, who chairs the superintendents’ council for the administrators association, said lawmakers should again reexamine the rules and funding for independent study, based on what happens to schools this fall.

Zazueta was less explicit. “We will need to continue conversations with policymakers on how to work together to respond to the challenges that the pandemic is placing on our educational system,” he said. “There is no silver bullet that is going to resolve many of the fundamental issues schools are facing.”