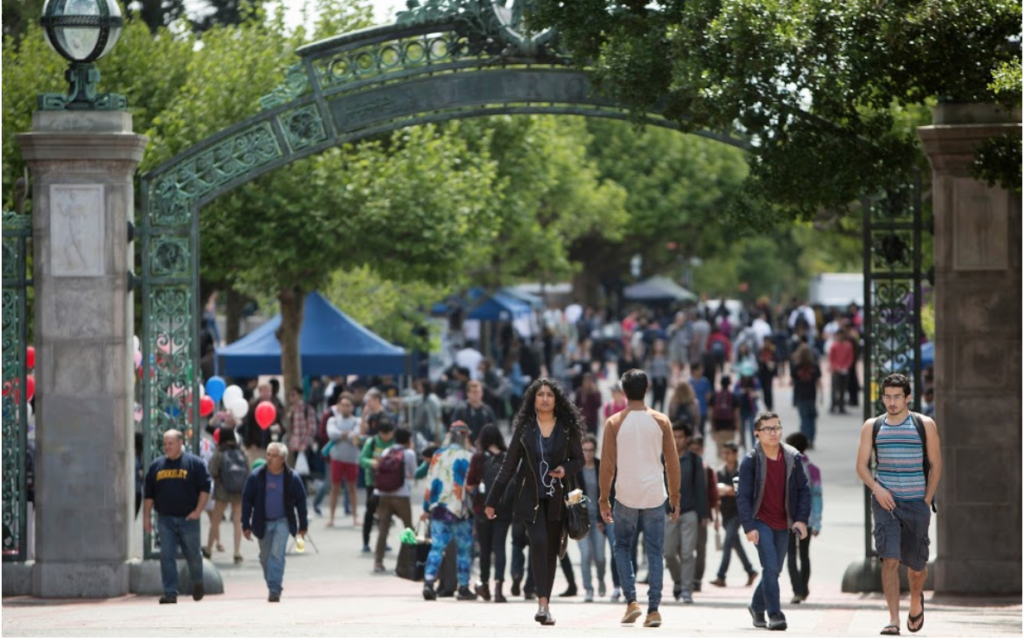 UC administrators and student leaders remain opposed to the idea.

ALISON YIN / EDSOURCE
In fall 2020, 26% of incoming freshmen at UC Berkeley were from outside of California. That's tied with UC San Diego for the highest share of out-of-state students at any UC campus.

ALISON YIN / EDSOURCE
In fall 2020, 26% of incoming freshmen at UC Berkeley were from outside of California. That's tied with UC San Diego for the highest share of out-of-state students at any UC campus.

Leaders in California’s Legislature hope to strike a deal by next week on a proposal to drastically reduce the number of out-of-state and international students who enroll at the most competitive campuses of the University of California each year.

Doing so would make room for more California residents at the university system at a time when in-state students are applying to UC in record numbers.

Legislative leaders are pushing a plan that would gradually reduce the share of out-of-state students admitted each year over a 12-year span beginning in 2022-23. That proposal, which was introduced by the Senate’s budget subcommittee on education earlier this month, calls for the system to cap out-of-state enrollment at 10% of incoming freshmen by 2033-34, both systemwide and at each campus, freeing up 4,584 slots by 2033-34 for California students.

Among incoming freshmen in 2020, 19% of them across the system were from out of state. At some campuses, that figure was as high as 26%.

The budget committees in both the Senate and the Assembly are expected to vote next week on a final version of the proposal. The change would apply to the entire UC system but would be most relevant to UC’s most competitive campuses, which enrolled between 17% and 26% out-of-state students for their incoming 2020 class: Berkeley, San Diego, UCLA, Davis, Irvine and Santa Barbara.

Lawmakers from the two chambers are still negotiating the details of the proposal, said Sen. John Laird, D-Santa Cruz.

Laird, who chairs Senate’s budget subcommittee on education, said the 10% figure is negotiable but added that “our intent is to stick with that.” Once the Legislature reaches an agreement on a proposal, Gov. Gavin Newsom will also have a chance to weigh in. The final budget must be agreed upon by June 15.

This year, the nine undergraduate UC campuses received 203,700 applications for freshman admission, about 32,000 more than a year ago. About half of that increase came from California residents. The system also received about 14,000 more applications from out-of-state domestic students than it did in 2020 and about 3,000 more from international students.

Counselors and admission officials attribute the jump at least in part to the elimination of the SAT and ACT as an admission requirement, a move that gave more students optimism about their chances of being accepted.

“That’s punch one, and the second punch to the gut is the fact that the slot is given away to a wealthy out-of-state student or international student,” McCarty, who is also chair of the Assembly’s budget subcommittee on education, told EdSource. “I think that the people of California, taxpayers and families, think this is just flat-out wrong.”

At the Berkeley, Los Angeles and San Diego campuses, about one-quarter of their freshman class in fall 2020 was from outside of California.

At UC Davis and UC Irvine, nonresidents made up 21% of incoming freshmen in fall 2020, while those students accounted for 17% of the incoming class at UC Santa Barbara. The other three undergraduate campuses — Santa Cruz, Riverside and Merced — enrolled less than 10% out-of-state students.

The UC enrollment item was among the handful of proposals that the budget subcommittees on education in both chambers did not finalize this week and needed more negotiation.

McCarty said lawmakers are “working behind the scenes” to finalize the proposal. Laird said he hopes that each chamber’s budget committee will approve the item next week.

The number of slots open for California students would fluctuate if the Legislature ends up agreeing on a proposal that caps the proportion of out-of-state incoming freshmen at more than 10%.

“In the Legislature, almost anything can be negotiated, but that’s where we’re starting, and that’s what we’re looking at,” Laird said in reference to the 10% cap.

Reducing out-of-state students would have a significant financial impact on UC because those students pay much higher tuition than in-state students. In 2020-21, California residents paid $12,570 in tuition and fees, while nonresident students paid an additional $28,992 for a total of $41,562.

Negotiations are currently underway between lawmakers to compensate UC for lost nonresident tuition revenue. Laird said the Legislature intends to permanently backfill those losses for UC.

UC leaders have expressed concern that the Legislature won’t be able to keep that promise if another recession hits, but Laird told EdSource that lawmakers will “make sure they don’t suffer” if that happens.

UC is autonomous and has ultimate authority over its admission and enrollment decisions, but the Legislature could tie UC’s funding to the proposal and essentially force the university system to comply.

“We understand and support the Legislature’s goal of providing more opportunities for Californians at UC, though we believe trying to achieve this through reducing nonresident students will potentially lead to unanticipated outcomes,” the university said in a statement Thursday to EdSource.

Aidan Arasasingham, president of the UC Student Association, said he is “deeply uncomfortable with the idea of pitting one part of our student community against another.” An Irvine Unified School District graduate, he said UCSA shares the Legislature’s goal of increasing access for California residents. Like UC administrators, he said a better solution would be for the Legislature to fund new enrollment growth at UC campuses.

McCarty noted that, prior to 2008, UC’s out-of-state enrollment was around 5%, but that spiked following the 2008 recession because UC needed more out-of-state students and the extra tuition they pay in order to cancel out budget cuts.

“But starting in 2011, the economy turned around, and we started giving more money to UC. And every year they’ve still increased the number of nonresident students. It’s a growing problem, and we need to address it,” he said.

Another reason UC administrators and student leaders have also pushed back against cutting out-of-state enrollment is because they argue it would diminish campus diversity.

McCarty argued that California, with millions of Latino students and hundreds of thousands of Asian and Black students, is already “a very diverse state” and said UC can have a diverse student population by enrolling more in-state residents.

But Arasasingham said that being able to engage with students from other states and other countries is a key value of a UC education.