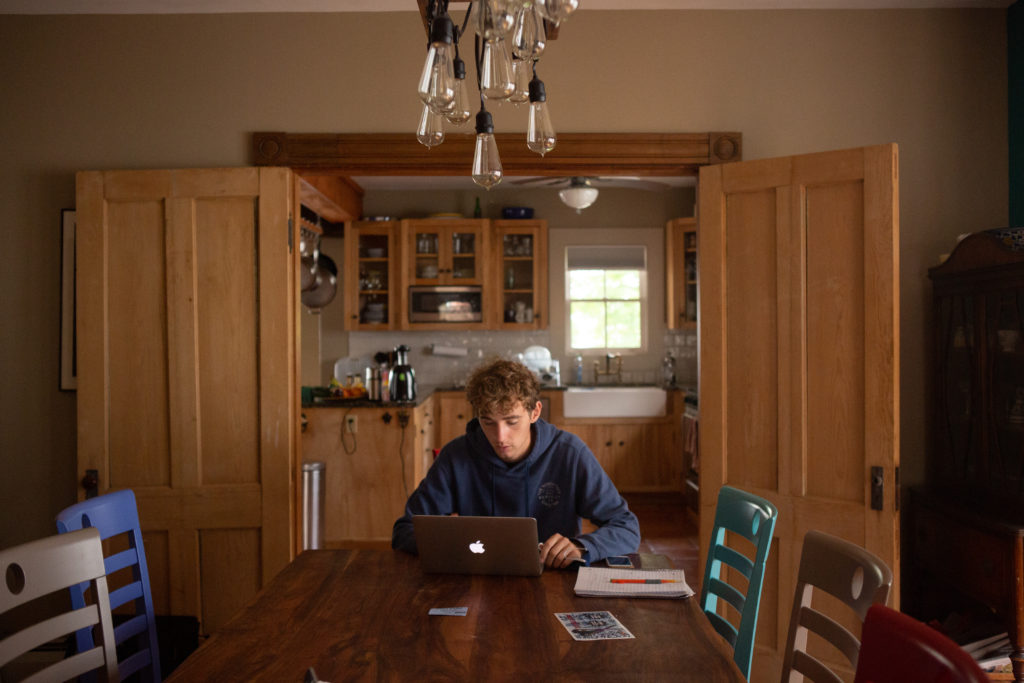 Weeks into the school year, parents say they still lack clarity and flexibility 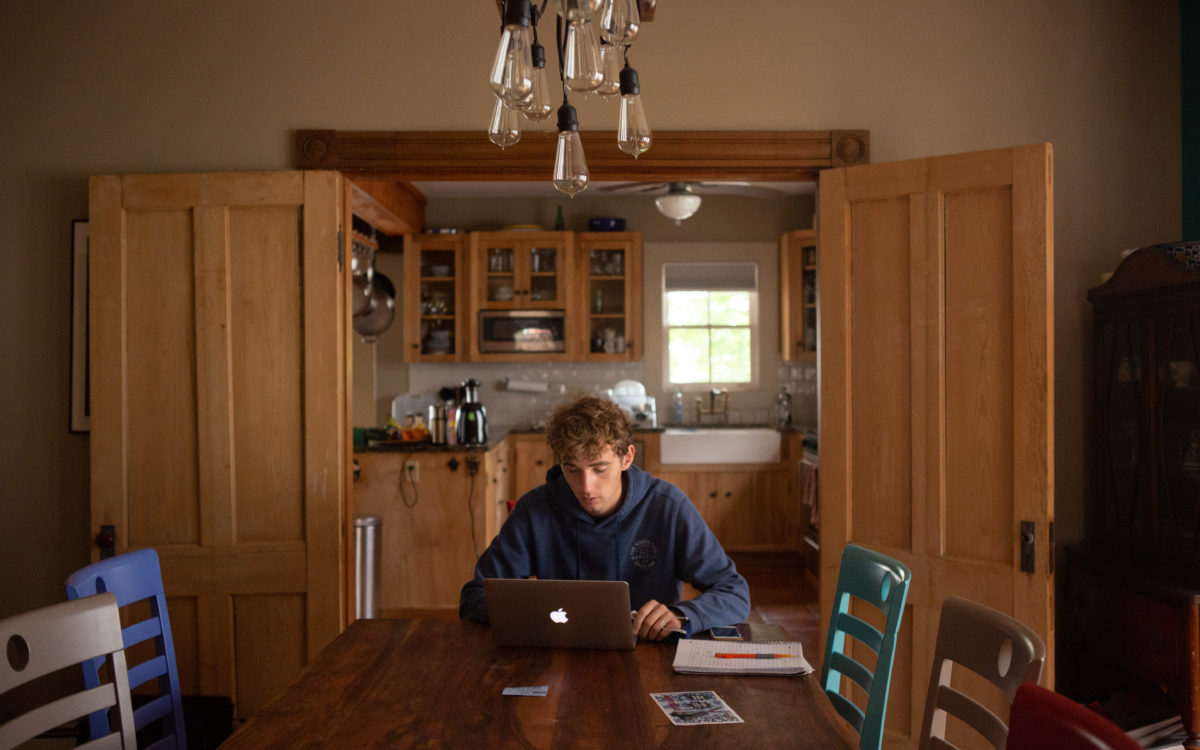 Credit: Photo by Allison Shelley for American Education
A high school student completes his schoolwork online from his home.

Credit: Photo by Allison Shelley for American Education
A high school student completes his schoolwork online from his home.

Weeks after most districts began the school year, some students who enrolled in independent study — the only option for those opting out of in-person learning — have yet to begin instruction, be assigned a teacher or be enrolled in all required courses.

Those students’ parents say they are confused about how independent study works and that communication from school officials has been sporadic. Many of those parents have children at high risk of infection or family members at home at high risk, among other concerns driving their decision to keep their children off campus.

EdSource has updated the Quick Guide to Independent Study.

For answers to these and other questions, go here.

Most California K-12 students have returned for in-person learning, but those who can’t or don’t want to return must enroll in independent study. While independent study has long been an option for a few students, this school year’s surge in demand is overwhelming districts and frustrating students’ families.

The situation has been so chaotic, state legislators are proposing changes that will make it easier for districts to manage independent study. In the meantime, parents are struggling to manage their children’s education.

Tammy Tyler has two sons: Eric is in high school, and Daelin is in elementary school. She’s at high risk for contracting the coronavirus, so she decided to enroll both boys in the independent study program in their district, Mojave Unified in Kern County.

But the first day of school came and went without any communication from her older son’s teacher and without the Chromebook that she was told he’d be receiving. She reached out to the school and didn’t hear back. Two weeks passed by the time she heard from his teacher.

So she looked into enrolling Eric in a community school, a type of public school that partners with community organizations to provide social-emotional support for students. She figured smaller size classes might allow for social distancing that would help keep her and her sons safe. But both she and Eric said it felt like a prison. There were security guards, no cellphones allowed, and students weren’t allowed to take anything to school with them — not even backpacks, Tyler said.

Ultimately, Tyler decided to enroll her older son in an online charter school, but she’s now waiting for him to be fully enrolled in his classes. At this point, Eric has missed about a month of school. Before the pandemic, he was an A student. Slowly, those grades have dropped, and Tyler worries this will set him back further.

“It makes me feel like this district, they really do not care. So distance learning was the same way as independent study…,” Tyler said. “The kids were kind of stuck; they really didn’t have work.”

Mojave Unified did not respond to requests for comment.

After the state statute that allowed schools to implement distance learning during the pandemic expired in June, legislators adjusted the rules for independent study and made it the only online option the state will fund this school year. However, school officials are complaining that the new rules are cumbersome and unclear and say they’re worried the system will break down if Covid outbreaks force large numbers of individual students, classrooms and entire schools into independent study programs on short notice.

In response to districts’ requests for clarification, legislative leaders have proposed a revision of independent study requirements, which must be voted on by Friday before they recess for the year. The proposed amendments clarify that districts can provide remote learning to quarantined students, receive funding beginning from the first day that a student enters quarantine, and have up to 30 days to ensure parents sign a contract agreeing to independent study.

Many parents understand that administering independent study must be stressful for administrators and teachers. But most also agreed that, for the sake of students, the issues with the virtual programs must be addressed and corrected sooner rather than later.

In San Diego County, Cynthia Wrona has three boys ages 5, 8 and 12. All three are on the autism spectrum, and she doesn’t feel safe sending them to school. Her youngest son is in kindergarten and her oldest attends an independent school for autistic children that her school district, Del Mar Unified, is paying for. Her middle son is in third grade and receives occupational therapy, speech therapy and counseling for behavior — all services that he received while distance learning last school year.

Wrona wants to enroll all three in independent study, but the team putting together her third grader’s individualized education plan, or IEP, has determined he would not qualify to continue receiving those services remotely now that schools have reopened. An IEP is a plan developed for a special education student that outlines what that student needs to learn in a specified period of time and what special services need to be provided based on the student’s ability. Wrona won’t send her sons to campus, however, until they have access to a vaccine that will protect them against the coronavirus, and her youngest sons are not yet eligible.

Rather than risk losing access to the special education services, the youngest boys are now enrolled in Coastal Academy, an online charter school in Oceanside, with an option in which she home-schools her sons while working with a school liaison.

“I feel like we are free-falling, unsupported as a mom with children with special needs. I need the village; I had an entourage, and I could parcel out services,” she said. “Now I am doing all of those things by myself.”

Del Mar Unified did not respond to a request for comment.

Wrona’s experience is similar to that of Joseph Camacho, who lives in El Sobrante in the San Francisco Bay Area. His son, Joey, is a special education student and an 11-year-old cancer survivor who isn’t old enough for a Covid-19 vaccine. Camacho isn’t comfortable sending him back to Fairmont Elementary School in West Contra Costa Unified.

But if they enroll in the district’s independent study program, dubbed the “Virtual Learning Academy,” Joey will miss out on the additional services called for in his IEP. The services Joey received at school were an in-class aide, additional instruction from a special education teacher, as well as speech and occupational therapy, all of which he received during distance learning. Camacho said he was told that Joey would not be provided an in-class aide under independent study, and that the district has not said how the other services called for in his IEP would be provided.

“It’s either send him to school and roll the dice, or get him into independent study, which is not an environment which they say people with IEPs should use,” Camacho said. “If I do go that route, I’m going to essentially give up the services that he needs, and if I want all of that I have to send him to school.”

Camacho considered keeping his son at home doing independent study until he can receive a vaccine — Pfizer board member Dr. Scott Gottlieb announced Aug. 30 that the company expects to have a vaccine for children ages 5 to 11 cleared for emergency use by U.S. drug regulators in late fall or early winter. But if Camacho commits to independent study, the family is not guaranteed a spot at their school when they are ready to send Joey to campus.

Fairmont Elementary is in a different city than where the Camachos live, but they were able to secure a spot there because of Joey’s special needs. Camacho fears putting Joey in independent study would make it harder to secure a spot back at the school if they return.

“What they’re offering is a problem because it’s not equitable. They’re offering something to a certain number of students who can succeed in independent study, and everyone else good luck,” Camacho said.

Camacho is hoping to work something out with the district so that it provides his son a virtual option that fits his needs.

West Contra Costa Unified officials were not available for comment.

At Los Angeles Unified, the state’s largest school district, over 12,000 students expressed interest in independent study a few days before the semester began on Aug. 16. The district runs the independent study program through one of its schools, called City of Angels. Prior to the pandemic, the school’s enrollment was less than 1,500 students.

Since school started, the number of students requesting independent study has dropped by several hundred, but the influx of students nonetheless has made it difficult to ensure each student is assigned the correct teacher.

Emily, who requested her last name be omitted because she is a foster parent, has a daughter in 12th grade. Everyone in their home who is eligible for a vaccine has received it, but with an ineligible 8-year-old and an 81-year-old cancer survivor living in the same home, her daughter has opted to continue learning from home this school year.

As a high school senior, her daughter should be enrolled in a total of six classes. But two weeks into the school year, she was enrolled in three classes — and one of them was incorrectly assigned. Rather than being assigned to a pre-calculus class, she was placed in a statistics course with a teacher who had never taught above sixth-grade math.

“We have a lot of empathy for City of Angels; I think they were not prepared for the influx of students that they got,” Emily said. “We’re not really stressing it, but if by week two or three she still is only in three classes with a sixth-grade teacher, it’s going to be really concerning because she’s college-bound. Senior year is not the year that you want her to suddenly not be completing her A-G requirements.”

Her daughter is now in her fourth week of class, and while her math class has been corrected and two more classes added, she is waiting for a visual and performing arts class.

“But we feel like we’re making real progress, and we keep getting better, and we’re going to keep working until we get it right,” he added.

As for Emily, she’s grateful her family has access to resources that help them navigate the college application process but knows that’s not the case for all families.

“I think about all the families who don’t have those resources, particularly multigenerational families, families with essential workers, families with children with disabilities,” Emily said. “It’s so much stress just to ensure that your child is getting the basic education that they’re entitled to. I really hope the state Legislature will start to rethink expanding the options for those who don’t feel safe being back.”