In inaugural address, Biden says it is possible to teach children ‘in safe schools’ 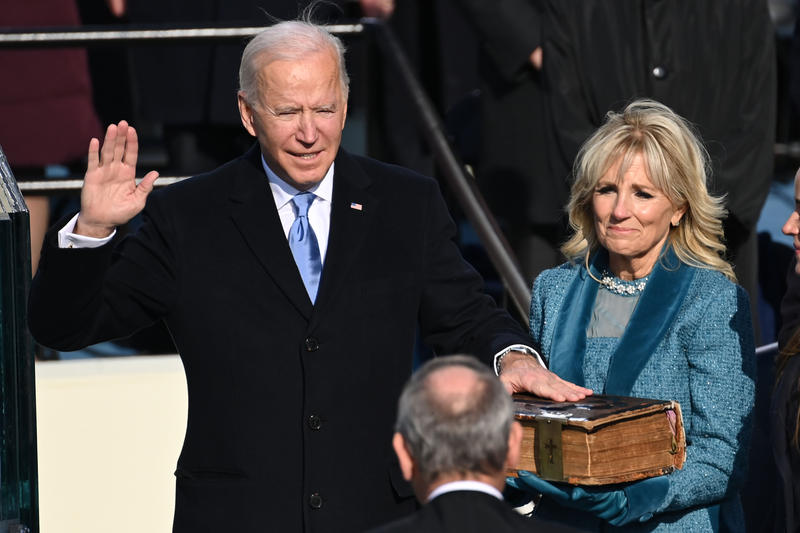 Californians may be touched by executive orders he plans to sign

Credit: Saul LOEB /POOL/CNP/Polaris
Joe Biden is sworn in as the 46th US President on January 20, 2021, at the US Capitol in Washington, DC.

Credit: Saul LOEB /POOL/CNP/Polaris
Joe Biden is sworn in as the 46th US President on January 20, 2021, at the US Capitol in Washington, DC.

While President Joseph Biden spent most of his inaugural address pleading for unity, he also touched on an issue of deep importance to many American families: getting children back to school during the pandemic.

“We can teach our children in safe schools,” Biden said in his address. He was alluding to his pledge to make it possible for most elementary school children to return to school for in-person instruction at least by the end of his first 100 days in office.

It was the only direct reference in his address to his expansive education agenda.

Just how many children could return to their classrooms, and when, could be affected by what happens to the $1.9 trillion stimulus plan Biden proposed last week in which he called for $130 billion in additional funds for schools to spend on costs related to reopening. What will happen to the plan is uncertain. Much will depend on his ability to get Senate Republicans to back it, unless Democrats are able to approve at least portions of it through a process called budget reconciliation, which requires only a majority vote in the Senate.

The fact that he pointed to it in an inaugural address very short on policy pronouncements, as is the case in most inaugural addresses, underscored the importance he is placing on the issue.

But Californian students and their families could feel the impact of the change of power in Washington much sooner by way of the 15 executive actions and two additional directives to his administration that he took within hours of occupying the White House.

For a full list of executive actions on Biden’s first day, see each action on the White House website here, and this New York Times compilation here.

One executive order repealed an order issued by former President Trump within days of his taking office in 2017 imposing tough enforcement policies in the interior of the United Sates, and inspiring anxiety if not outright fear among millions of California families, including their U.S.-born children.

Compelling research has shown that just the threat of deportation of family members or friends can have a significant impact on education outcomes of children, So diminishing that threat could have a rippling impact on large numbers of students across the state.

Biden also issued a memo affirming the Deferred Action on Childhood Arrivals (DACA) program, which provides relief from deportation and authorizes work permits for undocumented immigrants who arrived in the U.S. as minors. A quarter of a million Californians are DACA recipients, far more than any other state.

The program has been under constant attack from the Trump administration. Biden ordered the Departments of Justice and Homeland Security to take “all appropriate actions” to “preserve and fortify” the DACA program.  As part of the U.S. Citizenship Act of 2021, he is also proposing that DACA recipients be granted permanent legal status, with a path to citizenship, something that is not possible under the current program.

Another executive order directed the Department of Education to extend until Sept. 30 the current moratorium on paying student loans, which is due to expire at the end of this month.

The moratorium — known as “forbearance” — was included in the CARES Act approved by Congress last March. It means that no interest will be charged on student loans and students don’t have to make payments on them, at least temporarily.

According to the Chronicle of Higher Education, some 18 million Americans out of the 43 million student-loan borrowers have taken advantage of the program, including large numbers of Californians.

However, students will still have to pay back their loans.

A major part of Biden’s education platform is to forgive entirely up to $10,000 of federal student loans. But moving on this pledge will probably depend on Congressional action.

A loan forgiveness program would be a lot more consequential than the current loan forbearance program. It will also be far more expensive — an estimated $400 billion hit to the U.S. Treasury. One third of federal student loan borrowers have less than $10,000 in federal student loan debt, and if Biden could get this through Congress, millions of Americans would have their college debt erased altogether.

In an indication of the pressures Biden will be under, several Congressional leaders and progressive organizations had urged him to be even more ambitious, and to forgive up to $50,000 in student loan debt on his first day at the White House. The estimated cost: $1 trillion.

One point of contention is whether Biden has the power to forgive student debt, or whether Congress would have to approve it. Advocates of the proposal including now Majority Leader Chuck Schumer, D-NY and Sen. Elizabeth Warren, D.-MA, have argued that Biden does have the authority to do so under the Higher Education Act.

It seems highly likely that Biden will choose the legislative route to tackle the student loan forgiveness issue.

But after four years of frustration at having the White House and the Senate controlled by Republicans, and an education secretary mostly at odds with Democratic priorities, Biden will be under constant pressure to do more, and to do it quickly.

He made a start within hours of returning to the White House—this time not as vice-president but as president.