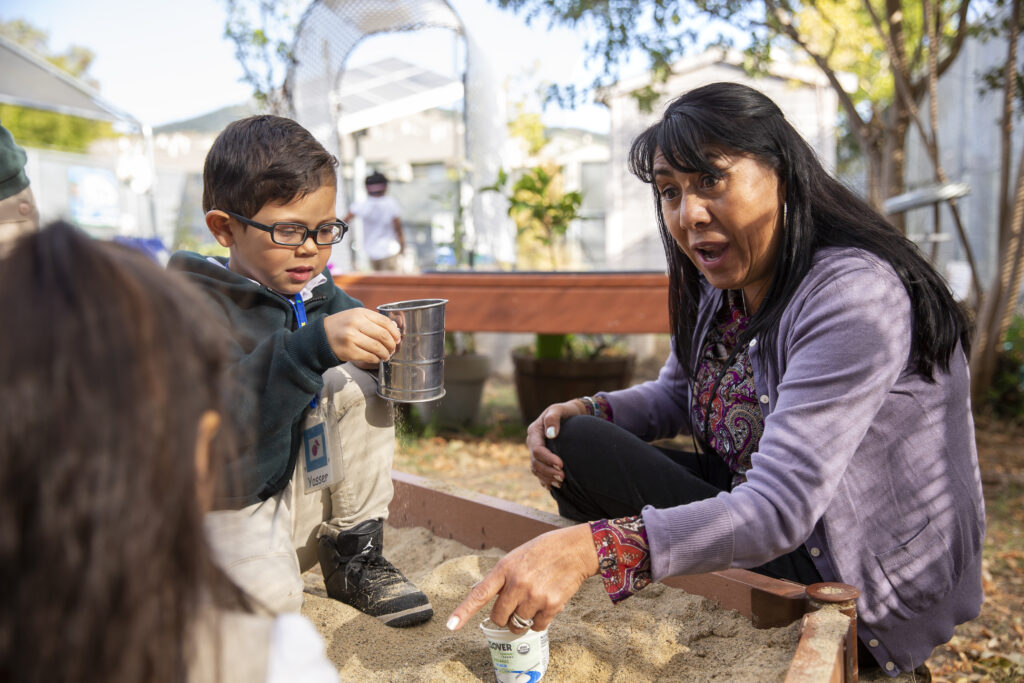 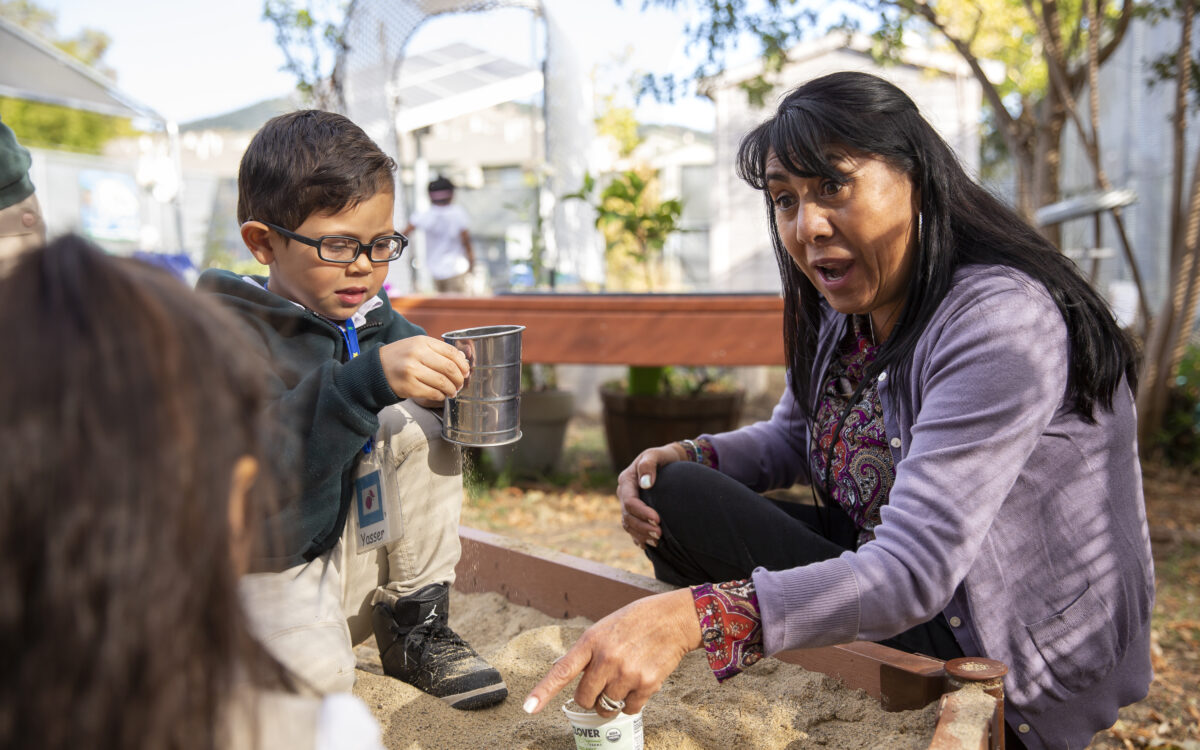 Advocates say the expansion of TK is an opportunity to offer high-quality preschool to more children who speak a language other than English at home — about 60% of young children in California, according to the Migration Policy Institute. Children who are learning English as a second language while still developing their home language are known as dual-language learners.

Who is eligible for transitional kindergarten?

Here are six strategies advocates recommend for schools to best serve 4-year-olds who are developing language skills in English and their home language:

Research shows that while children benefit from learning English at an early age, they also can run the risk of losing their home language. However, children who are given the opportunity to develop both languages and become fully bilingual may have developmental and cognitive advantages over monolingual children.

Currently, there are not enough opportunities for bilingual education in transitional kindergarten, according to some advocates.

“We definitely need more bilingual TKs. Many bilingual programs start in kindergarten or later,” Crolotte said.“We’re really missing a key window of opportunity in terms of language development and potential to become bilingual.”

The Advancement Project California and Early Edge have called for expanding dual-language programs in communities with large populations of children of color, dual-language learners and low-income students.

There are some significant challenges to expanding bilingual education in California, including staffing. Many school districts struggle to hire enough teachers with bilingual credentials to fill the slots they already have.

Still, some school districts have managed to expand their bilingual programs at the transitional kindergarten level. Since 2017, after voters repealed a law that limited bilingual education in California, Los Angeles Unified has opened up dual-language preschool and transitional kindergarten classrooms in Spanish, Mandarin, Korean and Armenian, at 36 of the approximately 220 dual-language elementary schools in the district. They plan to add more programs in the future.

2. Communicate and partner with families

It is crucial for schools and districts to proactively reach out to families who speak languages other than English at home to encourage them to enroll students in transitional kindergarten and to communicate the importance of continuing to speak native languages at home.

If children are able to maintain their home language, it can help give them literacy and language skills they can transfer to English, and it will allow them to become bilingual. But many families worry that their children won’t learn English if they continue to speak their home language.

“They might be worried they won’t be able to help their child in English, so it’s better maybe to switch to English,” said Carola Oliva-Olson, executive director of professional development and multilingual education at the Institute For Racial Equity and Excellence.

Experts say schools should share research with families that shows the benefits of speaking two languages and work continuously with parents to encourage them to read and speak with their children in their native languages.

In Guadalupe, the district launched a campaign to encourage more children to enroll in transitional kindergarten after realizing that most 4-year-olds in the area were not enrolled in preschool and were not nearly as ready for kindergarten as those who had attended TK.

“If families do not qualify for Head Start, their kiddos do not attend preschool. They would stay home with tía, a neighbor, or family child care,” said Mari Ortega-Garcia, director of early education and support in the district.

Ortega-Garcia said the communications campaign took a lot of work. She did radio interviews in Spanish about the importance of maintaining the home language. The district sent out messages about the bilingual transitional kindergarten program on social media and in a flyer that was sent with the local utility bill. They even announced it on a city marquee at the entrance to town. The principal went door to door inviting families.

3. Use and celebrate home languages in the classroom

Even when a school does not have the ability to create bilingual classrooms, or when teachers do not speak the languages spoken at home by their students, there are other ways they can celebrate children’s home languages.

“We know that there are strategies that teachers who do not know the language can and must use throughout the day, whether you have one child who is a dual language learner or many,” Oliva-Olson said.

“If I’m a monolingual teacher, I’m going to be limited, so understanding that is going to be useful. Maybe I can bring in colleagues, maybe I can partner with families,” said Anya Hurwitz, director of SEAL, an organization that offers training and resources for improving multilingual education for schools statewide.

If not all children’s languages are celebrated and included in the classroom, the children will come to conclusions about whether their language and culture matter, Oliva-Olson said.

“If someone speaks Spanish in the classroom and they sing a song in Spanish but they never mention Vietnamese, that child is trying to figure out what’s going on,” Oliva-Olson said. “If there’s some concern or that feeling that you don’t belong or there’s something wrong with you, it impedes learning.”

Teachers can also celebrate that students speak another language, asking them to share how to say a word in their home language, or just discussing how wonderful it is to be bilingual.

“Dual language learners should be proud of being bilingual. To achieve this, they need adults to make them proud and to model and demonstrate why bilingualism is great,” said Anna Arambula-Gonzalez, Language Learning Project coach in Fresno, speaking during a webinar about serving dual-language learners in transitional kindergarten.

One way for school districts to encourage home language is to offer Biliteracy Pathway Recognitions to preschool or transitional kindergarten students who have shown progress in language proficiency either in their home language or in English.

4. Sing, talk and move your body

Young children learn best through play. The same is true for learning language.

“We forget how important play is — language-rich and intentional play that immerses kids in learning and language but is truly play because that’s what, developmentally, kids need,” Hurwitz said.

Experts say teachers should use chants and songs, both in English and in other languages, to incorporate new vocabulary words and phrases, and to help children learn.

In addition, children should have lots of opportunities to talk with each other and express themselves in both English and their home language.

Teaching language to 4-year-olds isn’t the same as for kindergartners and first-graders. While the older children need to learn to read and write, the focus in TK should be on oral language development, said Dean Tagawa, executive director of the Early Childhood Education Division at L.A. Unified.

District teachers use strategies like asking students to talk to their classmates about the story they just heard, the science experiment they did or the picture they drew.

“They’re looking at a picture of an insect, for example, but they’re also naming it using the proper terminology in both English and Spanish,” Tagawa said.

Another proven strategy for teaching language is linking body movements to words, sometimes known as “total physical response.” Teachers can come up with different body movements for children to learn new words or phrases.

Both school districts and colleges and universities need to offer more training for teachers on how to best serve young children who are learning English, while also developing their native language.

Most of the materials available for bilingual education and teaching English learners were created with K-12 students in mind, Oliva-Olson said.

“In early childhood, there’s still a lack of understanding and awareness and knowing how to teach in a bilingual model. Why? Because there’s been no training. The research is so-so. There’s no materials. They’re making it up, they’re trying to do their best,” she said.

Since transitional kindergarten teachers have to obtain both a multiple-subject credential and a number of early childhood education units, many experts believe this is an opportunity to include more emphasis on teaching dual-language learners.

Oliva-Olson is working with Fresno City College on a multilingual certificate with courses that could fulfill the early childhood courses that TK teachers need. The courses they have developed so far include one on teaching reading and writing in Spanish and one on teaching dual-language learners with special needs.

In Los Angeles Unified, Tagawa said teachers in the program attend between six and 10 training sessions during a school year. In addition, they have spaces to share ideas and give each other feedback.

6. Assess learning in more than one language

Experts believe it is urgent that teachers monitor students’ learning not only in English, but also in languages other than English.

Oliva-Olson said teachers can see what a child has learned, even if they have not yet learned English.

“It’s all about the child who is a dual-language learner having access to learning all day, and not having to wait until they understand English and are able to produce English and have the opportunity to learn at that time. If they do not, they do not have the same benefits that other children have, so that’s unjust,” she said.

Oliva-Olson said one early childhood assessment for tracking progress in language and literacy, the Individual Growth and Development Indicators, has now been created in Spanish and another is being developed in Hmong.

This is not as simple as simply translating the assessment. Rather, it has to be developed keeping in mind the specific language and culture. The Spanish version, she said, considers many language variations across different cultures and countries of origin, since people from different countries often use different words.