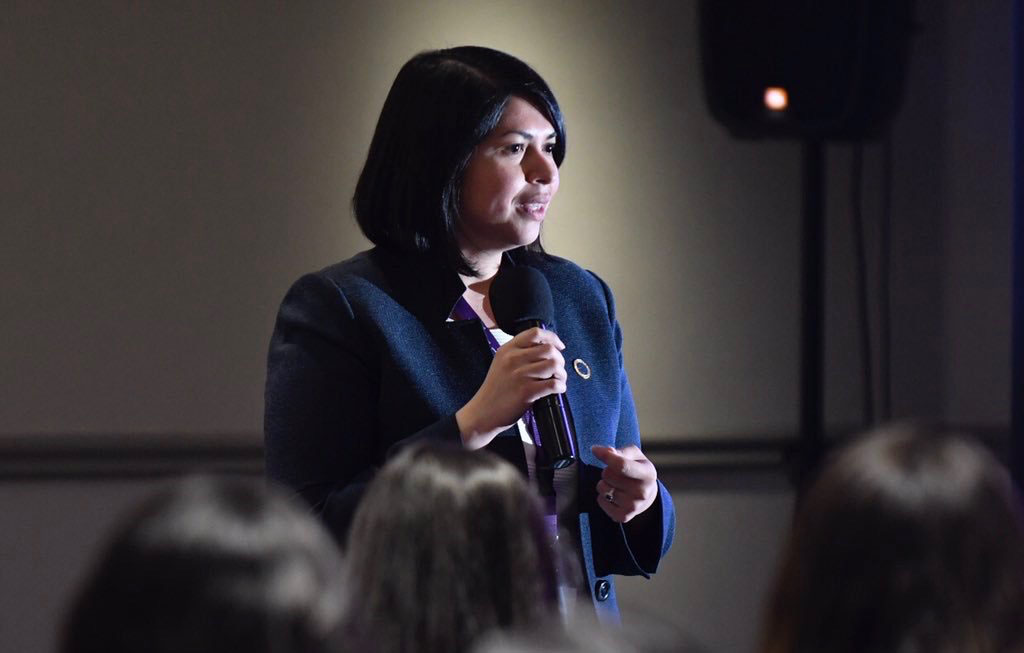 Just who is Daisy Gonzales, California’s new acting community colleges chancellor? Her journey, which she describes as an “incredible story,” may resonate with many of the system’s 2 million students.

“I became aware that I was in foster care at the age of 4” she said. As a child, Gonzales grew up in a variety of places including group homes, child care facilities, and even with relatives.

As she made her way, earning a Ph.D. and serving the last four years as deputy chancellor of the system, Gonzales has proudly worn her foster care identity as a “badge of honor.”

Gonzales said she knows that the experience of being in foster care is something that people hide or don’t share.

“I know it’s still a stigma … but it is an incredible story,” Gonzales said. “Only in this country can you go from foster care to leading the largest system of public higher education in one lifetime.”

Gonzales, 36, who identifies as a Latina, last week became the first woman of color to step into the chancellor position and lead the most diverse and largest public education system in the country.

She is only the second woman to fill the position since interim Chancellor Diane Woodruff was appointed in 2007.

“I’m thrilled to see her move into this role since she’s an important role model for women of color in education and women in education,” said Su Jin Gatlin Jez, executive director of California Competes, an education and workforce policy research group. “We have this Covid-19 crisis and all the uncertainty and volatility that few people anticipated. So it’s really important that there is this stable leadership at the community colleges and also a very forward-leaning, student-centered, equity-first leader.”

As one of the first women in her biological family to attend college and as a former foster youth, Gonzales said she knows she is an example for other young people.

Gonzales entered the foster care system as a two-year-old toddler. Unfortunately a “long history of family violence and abuse” persisted, she said.

She was reunified with her parents three times, but “at the age of 15, I decided I did not want to be reunified with any family members any further. My case was no fairytale. I did not live with any other families but always in group settings.”

The journey was not easy.

“I emancipated when I was 17 because a social worker told me I would qualify for more financial aid, but that was simply not true,” she said, adding that, instead, all of her benefits were terminated, and she was considered an independent adult. “I had nowhere else to go.”

Fortunately, she had a high school chemistry teacher, Patricia Barker, who took her in and became family to Gonzales. The two are still in contact, and Gonzales was the maid of honor at Barker’s wedding.

Barker, who was only a couple of years into her teaching career at the time, said she wasn’t fully aware of Gonzales’ background when she was her teacher, only that she saw a student who was an “amazing leader” and wanted to “bring people together for a purpose.”

Gonzales would take the lead on academic projects in school and organize other students to work together. Her drive was the impetus that led to what would become a lifelong friendship with Barker.

“That’s maybe what drew her to me … it was a mutual benefit,” she said. “It wasn’t like I needed to go help this girl. There was never any kind of sense that she needed me to help her. It was more because it was just the right thing to do, and we had that respect for each other.”

By 18, Gonzales was enrolling in Mills College in Oakland and starting her academic career in a program for first-generation college students. She received scholarships like the California Chafee Grant, which goes to former foster youth, and she worked three different jobs to get through college.

Her achievements have propelled her to lead the state’s 116 community colleges while Eloy Ortiz Oakley takes a four-month sabbatical as a higher education adviser in the Biden administration.

Gonzales and Gatlin Jez worked together recently on an initiative to examine California’s adult learners. “And I was impressed with her passion to achieve more equitable outcomes for this population,” Gatlin Jez said.

As acting chancellor, Gonzales takes over at a tumultuous time. Amid the coronavirus pandemic, enrollment in the colleges has plummeted and transfer remains a concern as too few students continue to transition to universities.

She’s also stepping in just as many community college districts consider whether to mandate vaccines for students and staff to access campuses. One of Gonzales’ first actions as chancellor was urging those district leaders to require Covid-19 vaccines. (The chancellor’s office has limited authority over the colleges and lacks the legal authority to require vaccines because state law leaves the management of communicable diseases to community college districts.)

“That optimism comes with the journey of your lived experience,” she said. “I survived many different systems that were not built to help me succeed, from foster care to being an English-language learner to being a first-generation college student. This is not my first time being the first in a role.”

She views her new role as “empowering the rest of the team” and leading the statewide community college system to create partnerships that will help the system be successful and unapologetically advocating for students on a state level.

Gonzales said she’s also optimistic because she knows from experience that the community colleges have some of the “hardest-working faculty and staff, the hardest-working system office and the most resilient students.”

Gonzales has notably been leading the community colleges’ diversity, equity and inclusion work to create a more anti-racist system by improving faculty diversity and improving student success measures like transfer rates among Black and Latino students.

Oakley recruited Gonzales in 2018 from the state Assembly, where she was principal consultant for the Assembly Appropriations Committee, to the community college system to serve as deputy chancellor. Her focus has been setting and guiding policy across the colleges and implementing the system’s plan to improve student outcomes.  She earned a bachelor’s degree in public policy from Mills as well as a master’s degree in sociology and Ph.D. in sociology from the University of California, Santa Barbara. Gonzales has worked as a K-12 teacher, in addition to her role with the state Assembly, where she was responsible for providing political strategy, expertise and analysis of education and economic development.

Later this month, Gonzales will embark on a student-centered listening tour across the state to learn how the system can change to better serve students and their needs.

The chancellor’s office is still focused on increasing completion and transfer rates, ensuring students can have good-paying jobs and decreasing racial equity gaps in student achievement, she said.

Gonzales said she knows that people are curious about whether her priorities will differ from Oakley’s, but “our core values are not changing … the core value was always our students. So, the work will continue on behalf of our students.”

Under her leadership, Gonzales said, “Our day-to-day priorities will not change.”