How California high schools plan to pull off ‘normal’ graduations 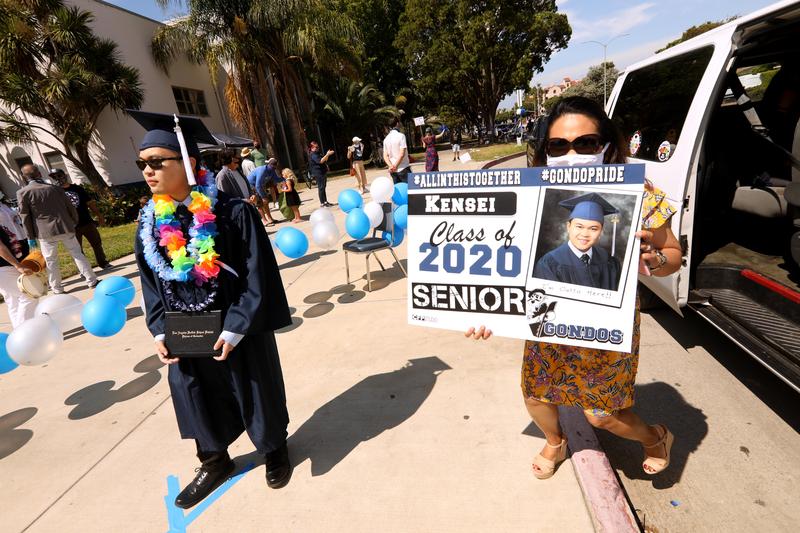 Social distancing rules will cap how many can attend each ceremony

Credit: Genaro Molina/Los Angeles Times/Polaris
Venice High School graduate Kensei Ono, 18, waits for his turn to be photographed while his mother Susie holds a placard featuring her son while taking part in the Venice High School Class of 2020 Senior Graduation Parade in Venice in June 2020.

Credit: Genaro Molina/Los Angeles Times/Polaris
Venice High School graduate Kensei Ono, 18, waits for his turn to be photographed while his mother Susie holds a placard featuring her son while taking part in the Venice High School Class of 2020 Senior Graduation Parade in Venice in June 2020.

Hurtling toward the end of a hectic year, most K-12 and high school districts in California are intensely focused on reopening campuses and giving the Class of 2021 a final send-off to remember in June.

The goal and operating assumption, many district administrators say, is they can do an in-person graduation, where seniors can walk across a stage with their families present.

That’s the way it always had been until last year, when, in the first throes of Covid, all but small districts did remote graduations — livestreamed and video recorded — or did a drive-thru diploma pickup. 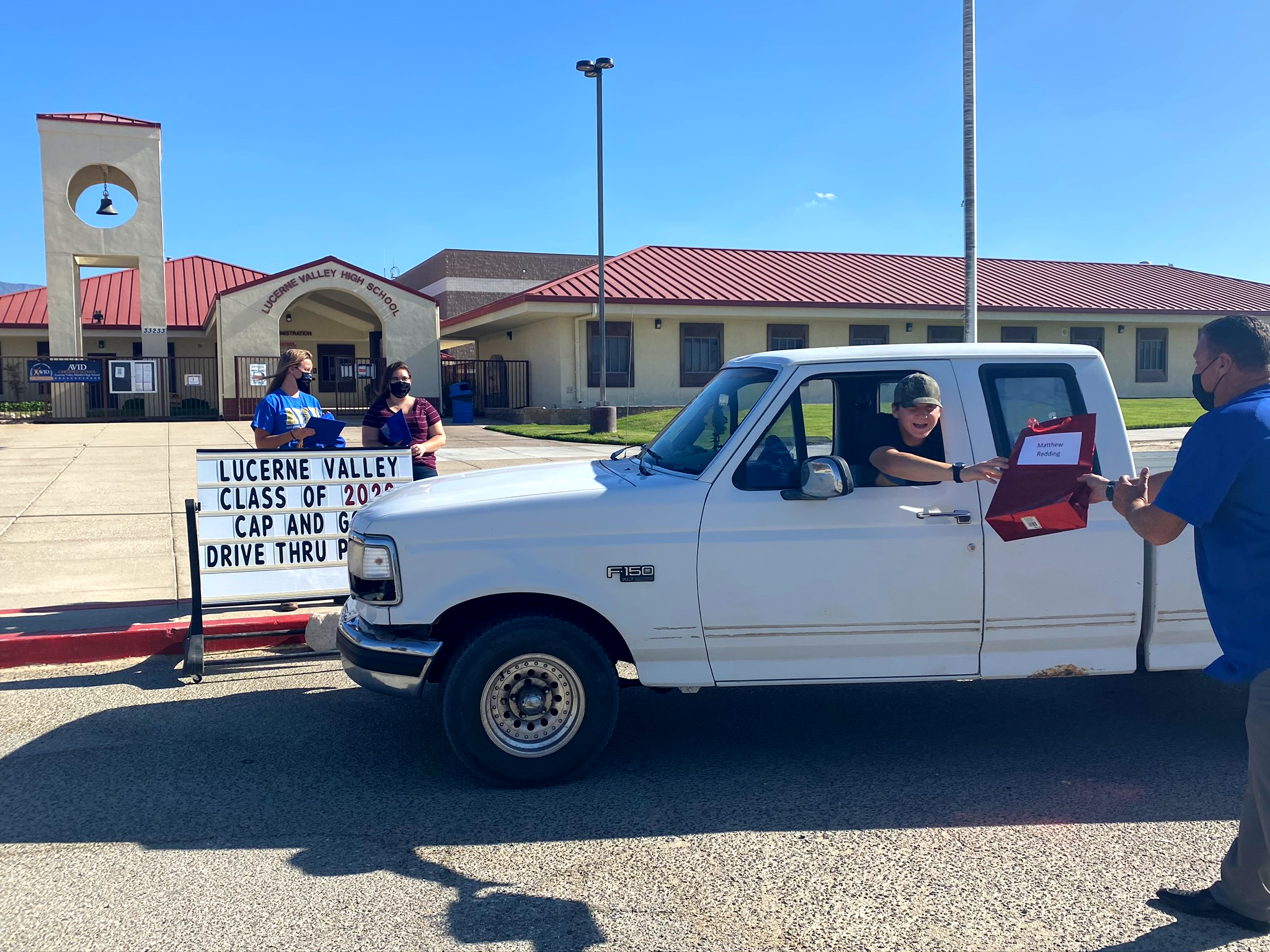 Now, students say they want, and administrators agree they deserve, a typical graduation after a most atypical year in distance learning apart from friends. In a nod to what they’ve endured, Fresno Unified is calling the ceremony “A Celebration of Resiliency and Dedication.”

“The District recognizes that high school graduations are a once in a lifetime event and a cherished memory for our graduating seniors and their families,” Chris Funk, superintendent of the East Side Union High School District in San Jose, wrote in a March 23 letter to seniors.

All of the districts EdSource contacted are planning for graduation ceremonies outdoors, with livestreaming for families that cannot or choose not to attend.

Pulling off a graduation, though, will require the same painstaking attention to safety and health precautions and social distancing as a reopening of school — for an event attended by hundreds of parents who may be unfamiliar with the protocols. On March 26, the California Department of Public Health issued a separate guidance for commencement and graduation ceremonies beyond the extensive requirements issued the same day covering all outdoor seating events and performances.

Among the requirements listed in the graduation document, districts must:

A further complication is that some epidemiologists are predicting a fourth wave of the virus by mid-May. As a result, many districts have been building contingency plans.

“We have been working on graduation plans since January, because we realized we could be in the purple, red or orange tier at the time of the event,” with each tier setting different limits on attendance, said John Malloy, first-year superintendent of the San Ramon Valley Unified School District in Contra Costa County. As of March 30, the county, along with 35 other counties, was in the red, or second-most restrictive, tier.

Poway Unified in San Diego County, San Juan Unified in Sacramento County, Long Beach Unified in Los Angeles County — the state’s fourth-largest district — and East Side Union High School District in Santa Clara County are among the many districts that have sent the same message to the public: It’s premature to be more specific than to say graduations will be in person, but the number of attendees at the events will depend on current health conditions and restrictions in place at the time.

“By the time May rolls around, whatever you have put in print may be outdated,” Funk said.

The number would translate to only 100 to 125 students, plus staff and two family members per student for each of school’s three to five ceremonies. The ceremonies would last a half-hour at each high school’s football field or outdoor quad.

If the county increases the capacity, there will be larger and fewer ceremonies, Funk said. The alternative is what East Side did last year: a video, with a photo of each graduate and a drive-thru graduation, in which each student gets out of the car and walks across a stage to receive a diploma.

The announcement in mid-March that there would be an in-person graduation “came out of nowhere,” said Angelina Ruiz, a senior at Long Beach Polytechnic High. For students who have been holding down jobs and worried about getting enough credits, a graduation ceremony has been an afterthought, she said. “We were all prepared not to have a graduation after not going to school for more than a year.”

While students with older parents anxious about Covid may not go, Ruiz said she’d look forward to saying goodbye to her friends and salvaging a rough year with a happy farewell.

Natomas Unified, a 10,000-student district near Sacramento International Airport, is hedging its bets by renting out 10,624-seat Sutter Health Park, home of the River Cats, Sacramento’s Triple-A West professional baseball team, for ceremonies for four high schools; the team will be away from June 8-10.

Families will be in the stands, sitting together in pods with each pod kept 6 feet apart, with graduates in the field, 3 feet apart, as permitted under the latest social distancing rules.

Graduation ceremonies are most memorable when they’re personal, reflecting the experiences of the graduates and the values of a community. In a state as big and diverse as California, the feel can be very different.

A contrast in size and style

The 700-student Trinity Alps Unified in historic Weaverville, west of Redding, and 74,000-student Fresno Unified, the state’s third-largest district, will offer a small-town and big-city contrast.

At Fresno’s graduations, there will be confetti, fireworks, laser lights and a swag bag of items with school logos and a surprise gift, although the biggest reward for students will be seeing their classmates face to face for the first time in a year. Many seniors have indicated they will remain in distance learning if high schools reopen in a hybrid model this month.

Bryan Wells, Fresno Unified’s assistant superintendent of student engagement, said he is “super excited” after five focus groups of students and a survey of the 4,000 members of the Class of 2021 on what they want. The results included being able to walk across the stage in cap and gown with “Pomp and Circumstance” playing; having family in attendance and getting a professional photo holding a diploma.

Two Fresno high schools have stadiums big enough to do their ceremonies in two shifts. For the others, the district has hired an outdoor pavilion. Fresno County is tying a venue’s capacity to a color tier. For the orange tier, which Wells hopes the county will be in by May, that’s 33% of capacity, which would allow for about 1,500 people at a time. With six tickets per family, that means two ceremonies for some schools at 6 p.m. and 8 p.m.

The Fresno graduations, scattered from May 24 to June 10, will include one extra event. Fulfilling a promise to the Class of 2020 that Superintendent Bob Nelson made last year, those graduates from all schools can walk the stage — in cap and gown and have their individual photo taken — at an event reserved for them.

Richard Romero, a senior at Fresno High, which his two sisters also attended, said that after a year of a pandemic that took lives in many families in Fresno, classmates who “worked their butts off to get good grades” are ready to make their parents proud. Others, he said, are looking forward to “strutting on stage.”

Worried about contracting Covid, he and his family probably won’t go. “I’m OK without a graduation,” he said, “but I know a lot of seniors will enjoy it and feel like they’ve been working up to something big.”

A six-hour drive to the north of Fresno, Trinity High expects to hold a graduation ceremony on June 11 for its 65 to 70 graduates as it did last year, on its football field. Seniors will be in the bleachers and families will be seated in 10-by-10-foot squares separated 6 feet from each other.

A lottery will determine the location of the squares, and each square will be marked with a big photo of each graduate.

There’ll be no fireworks, although there will be some singing using cordless mics. It’ll be a low-key affair in a small town whose families know each other well. And at the end, the county health officer has been promised families will go their own way without congregating, said Trinity Alps Unified Superintendent Jaime Green.

Laverne Valley Unified Superintendent Peter Livingston can identify with that. Last year, the 45 graduating seniors at Laverne Valley High, in the sparsely populated desert county of west San Bernardino County, had an in-person ceremony on the sports field. Senior Breanna Mills, a barrel racing rider, highlighted the event by arriving on her wild mustang with the American flag to “God Bless America.”

“This year we will top it,” said Livingston, without specifying how and jinxing it. “Our Class of 2021 deserves it! They have been through quite a year.”