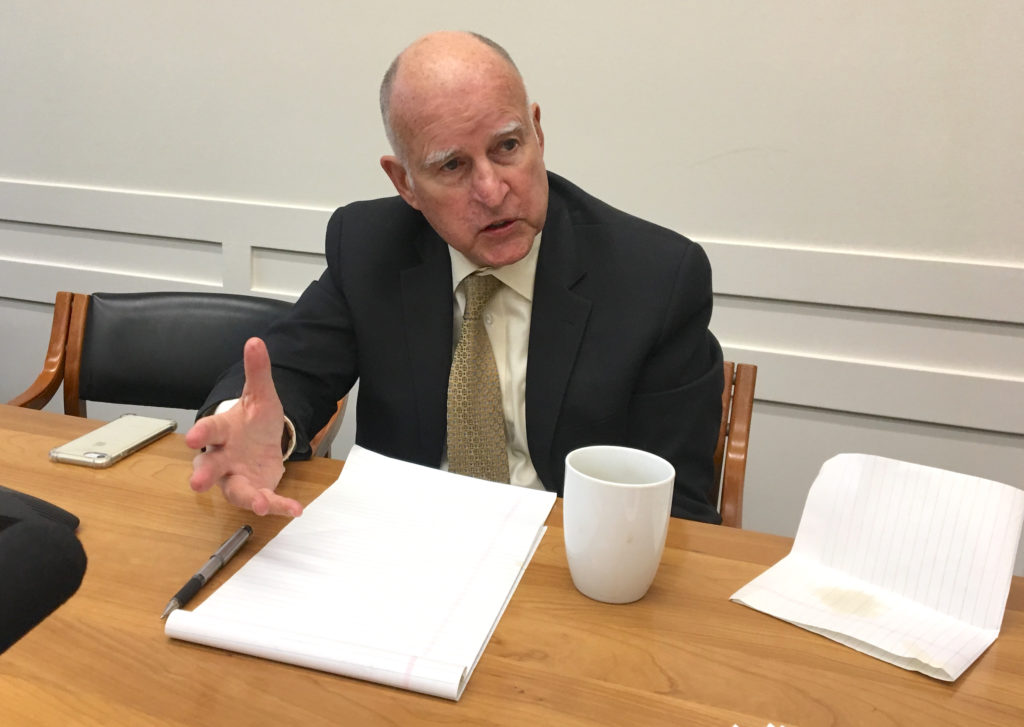 When former California Gov. Jerry Brown envisioned Calbright College barely five years ago, he saw California leading the country in virtual education by building an online-only community college that would target working adults seeking to improve their skills and move into better-paying jobs.

Today, just a year and a half since the embattled college opened its doors to students, Brown remains one of its chief defenders. He still sees the college as the public solution to predatory for-profit institutions that targeted adult and low-income workers in the state to pursue degrees and credentials, sometimes at the cost of excessive student loans.

“The concept of Calbright is more relevant than ever,” said Brown, 83 who retired in 2019 after ending a second stint as the state’s Democratic governor.   “There’s more money now in higher education than ever before, so it’s not a money question. It’s the concept. Could the for-profit online colleges receive a public option? Could they face some competition from a public option, which Calbright represents? It’s a very attractive alternative for working people, not the fancy elites, but people who are struggling to improve their lot in life by upgrading their skills and doing so in a way that is affordable.”

Calbright, which is free to students, is a self-paced alternative to traditional colleges intended to serve adults between the ages of 25 and 34. The college offers a competency-based education model, which assesses students based on the skills they learn and not the amount of time spent in class.

Calbright faces an uphill fight since many in the Legislature have lined up against it and view the state audit as ammunition to eliminate the institution. Assembly Bill 1432, from Assemblymembers Evan Low, D-San Jose and Jose Medina, D-Riverside would eliminate the college by the end of 2022-23 and passed unanimously in that chamber. The Senate Education Committee will now consider the bill, and its chair, Sen. Connie Leyva, D-Chino, said she will fight for its survival.

The frequently criticized college has stumbled since opening to students in October 2019. A total of 904 people enrolled in Calbright at one point or another, according to a recent state audit that criticized the college’s former leadership for failing to provide students with training and overpaying some executives. (Calbright’s former president, Heather Hiles, defends her time as Calbright’s leader and blames the college’s trustee board and the new president for abandoning the plan she created for the college. She resigned in January 2020 and was replaced by Ajita Talwalker Menon.)

Of the 904 students, 384 dropped out, 87 were inactive for at least 90 days, and only 12 students received a certificate in the first year. According to the college, 41 certificates have been awarded as of the end of March.

Calbright has had its detractors since its inception. Some faculty groups have argued that the millions of dollars Calbright received would have been better used by the state’s 115 traditional community colleges, which serve nearly 2.1 million people. They also have criticized Calbright for duplicating programs offered at the other colleges, although the state’s auditor said the programs are different.

Calbright’s history stems from Brown initially urging the community college system to come up with online solutions that would increase college access to the millions of Californians who had some college and no degree. In 2017, a task force from within the system ultimately formed the idea of Calbright and presented it to Brown. In 2018, Brown proposed the online college in his budget, and it won approval in the Legislature that June.

Brown agreed with the audit’s findings that the college got off to a rocky start and “didn’t have the proper leadership.” But the state’s lawmakers did give the college seven years to start, he said, adding that in the middle of building Calbright, the coronavirus pandemic also caused some difficulty.

“None of us anticipated a global pandemic, and even the colleges that have been around for decades are having some real issues with enrollment,” said Larry Galizio, president of the Community College League of California, a nonprofit that advocates for the two-year system. Galizio called the effort to eliminate Calbright “premature.”

Calbright should be given a chance to “recalibrate course,” Brown said. “What possible public good could be achieved by destroying this program?”

Brown and Galizio aren’t alone in their support. In the Senate, Leyva said Calbright deserves a chance.

“There’s no doubt that Calbright needs to improve,” said Leyva. “But we need to recognize that the first leader of Calbright did an abysmal job. And we did give them seven years, as a Legislature. We gave them until 2025, so why are we now in 2021 deciding we want to get rid of them after a misstep of leadership and a 100-year pandemic?”

Leyva admits that it will be a battle to convince her colleagues to keep Calbright. But the college’s fate isn’t completely sealed. AB 1432 could die in the Senate. Or, if it passes there, Gov. Gavin Newsom could save or eliminate the college. Last year, the Legislature voted to eliminate the college, but Newsom saved it by including it in his budget agreement.

A representative for Newsom’s office declined to comment on the issue.

“Calbright has said they’ll accept the recommendations of the audit, so I think that will help quell some of the opposition from my colleagues,” Leyva said. “In my mind, there’s no reason for us to not have schools in place at all levels to make sure that every student, no matter how old or young, has access to a better life for them and their families.”

Brown said he hasn’t discussed Calbright with Newsom. And he’s only talked about the college with one other lawmaker, Sen. John Laird, D-Monterey, who is chair of the budget subcommittee on education. A representative for Laird said he declined to comment on the issue. But Brown does believe Calbright aligns with Newsom’s and the state’s goal to use technology to empower the people.

“Calbright is all about equity,” he said.

And without the college, the only people who will be hurt “will be low-income Californians that will lose an opportunity that they can find in no other way unless they pay a handsome fee to a corporate vendor,” Brown said, referring to the for-profit colleges.

Leave a Reply to Haziel