For months, California private schools have been waiting for 'emergency' Covid aid 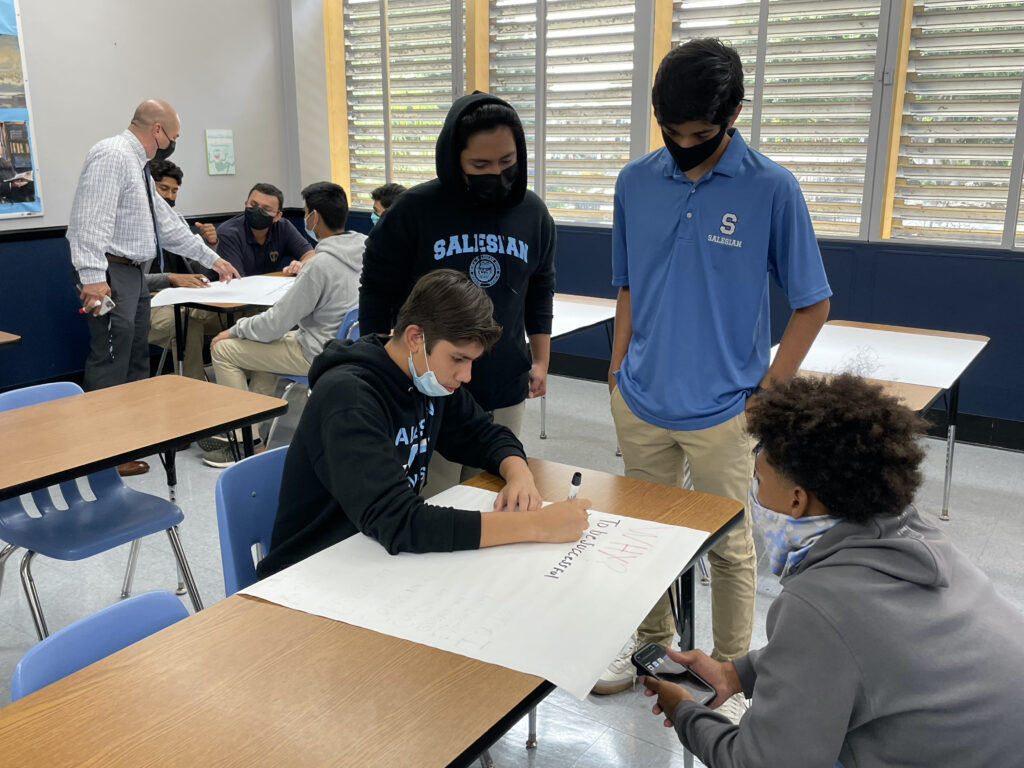 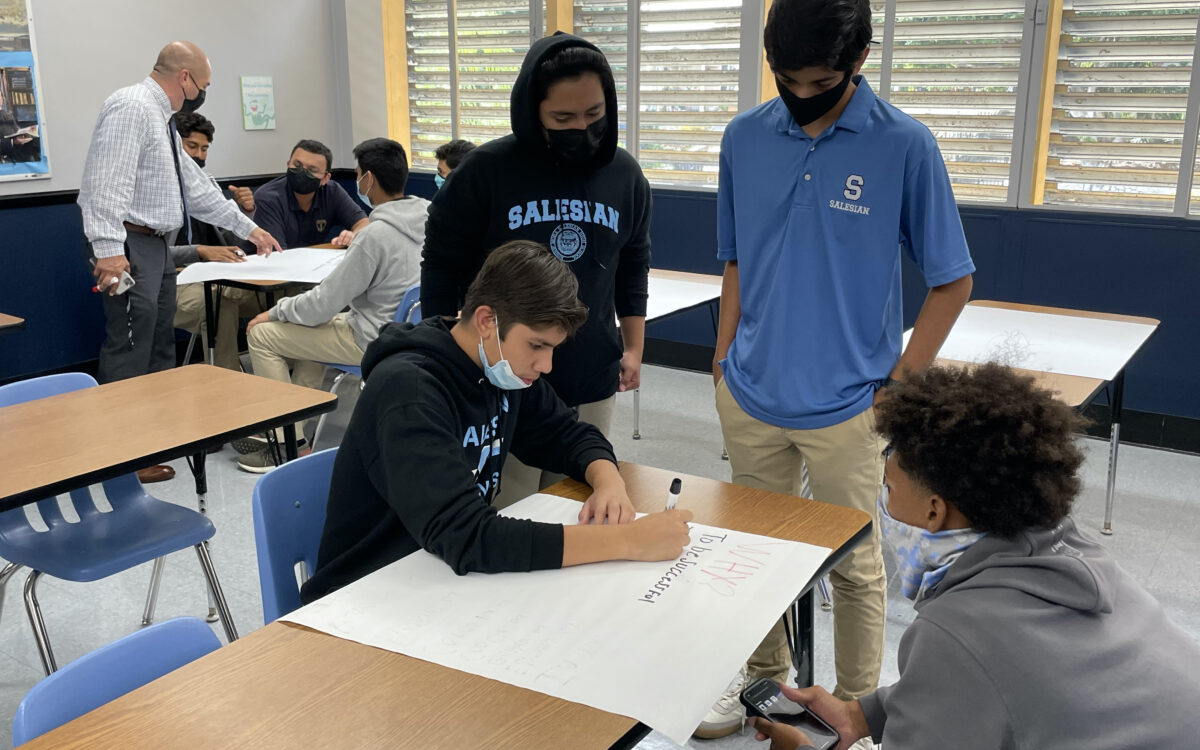 Courtesy of Bishop Mora Salesian High School
Students at Bishop Salesian High in Los Angeles share their ideas in an exercise developing the school's vision and strategic plan for the next five to seven years – a process that also involves parents and alumni . Alex Chacón, the school's president, stands in front of the back table.

Courtesy of Bishop Mora Salesian High School
Students at Bishop Salesian High in Los Angeles share their ideas in an exercise developing the school's vision and strategic plan for the next five to seven years – a process that also involves parents and alumni . Alex Chacón, the school's president, stands in front of the back table.

Recognizing that all schools were struggling with Covid, Congress offered help this year for private along with public schools. The $5.5 billion for non-public schools was small compared with the $230 billion in pandemic relief for public schools since March 2020, but nonetheless an unprecedented amount.

Congress titled it “Emergency Assistance for Non-Public Schools” to stress that the money should go out the door quickly, especially to schools serving low-income families. A big beneficiary was to be California’s urban parochial schools, surviving financially for years on the margins and on their wits. Still, they wondered if the state’s share — $368 million split over two rounds of funding —was too good to be true.

For the seven months since Gov. Gavin Newsom applied for and received the money, it has been. Some schools fronted tens of thousands of dollars for Chromebooks, air filtration systems and PPE assuming they’d be quickly reimbursed. They weren’t. The first checks went out last week, and most won’t be paid until sometime next month.

They anticipated the state would create a system for providing them counseling, tutoring and mental health services for this fall, if not last summer. It hasn’t, although many other states have provided services for their private schools.

Instead, the California Department of Education, which was in charge of distributing the money, made vague commitments and missed a six-month deadline for clarifying how and when it would disburse the funding. Earlier this month, it told the schools that the earliest that private schools would learn which vendors they could use for services they want would be the end of February — more than a year after Congress approved the initial round of funding.

“We aren’t asking for anything other than what public school kids need,” said Kathleen Domingo, executive director of the California Catholic Conference, the public policy voice of the Catholic Church of California. “I don’t understand why the department has been choosing to drag their feet in such a prolonged manner.”

“It feels like the carpet is being pulled out from under your feet. We have depleted our own funds paying for health and safety purchases up front,” said Samuel Torres, superintendent of Catholic schools in the Diocese of San Bernardino.

“We took the risk to open school this year and now are spending the little cash we have in the bank to pay employees, pay for testing and the like,” said Paul Escala, the Superintendent of Schools of the Archdiocese in Los Angeles, the largest non-public school system in California. “As kids wait, it is harder to provide what we do. That’s why we have been so vocal.”

On Nov. 12, exactly six months after schools were notified they were approved for funding, WestEd, a San Francisco-based research and consulting firm that the department designated as the project manager, will launch what could be a three- to four-month process to determine each school’s needs and match the vendors to serve them. This week, Lindsay Tornatore, director of the education department’s School Achievement and Support Division, said the department is looking at ways to speed up and simplify the process. Late February is an outside date to complete the work, she said.

The U.S. Department of Education made it clear in an FAQ in September that states must prioritize assistance to nonpublic schools that enroll low-income students and are most impacted by the pandemic. Private and parochial school leaders in particular have become increasingly frustrated with California’s response. They say they had urged the department to work with them and the local agencies that they already use for instructional, mental health and counseling services but the department ignored them, they said.

Private school students experienced the same setbacks as public school students during Covid, he said. “They lost loved ones, they’ve been isolated, they come from parents who work at home with connectivity problems.”

They questioned the selection of WestEd, the department’s go-to consultants on policy issues and public outreach, because it was unfamiliar with their needs.

A new obligation for education department

At issue is the first $187 million in emergency assistance, which will be divided among 547 schools approved for money out of about 3,000 private schools in California. It works out to $1,011 per student, plus an additional $202 per student for schools serving largely low-income families, according to Catapult Learning, a provider of instructional services to public and private schools. Many private schools have never sought federal money, while others did not qualify because they received Covid-relief business loans.

Low-income private school students already qualify for some federal funding. But unlike public schools, which get federal funding directly and can hire staff to provide academic and social services, funding for private schools is indirect under federal law. In the case of Title I, the largest source of federal funding for low-income children in non-public schools, private schools must contract services through the public school district where they are located. Over the years, Catholic schools, sometimes through the Diocese, have developed close relationships with local agencies and nonprofits for academic and counseling services. The requirements of the Emergency Assistance for Non-Public Schools were not new.

New was Congress’ decision to funnel the funding through the state’s educational agency under the assumption this would be a more efficient process. For California, the Department of Education would be the fiscal agent overseeing the funding. During a webinar for non-public schools, Tornatore explained why it has been challenging.

“Let’s call it for what it is: California is not as far along as other states,” she said. “California is unique. We have many local-state requirements that we are working to fit into federal requirements. CDE has never had the opportunity to provide supports and services directly to private schools as the Emergency Assistance for Non-Public Schools prescribes. Because we are building the infrastructure and because California is complex and large, we are using the maximum amount of time that the federal timeline is affording to use.”

Unlike other states, California government departments are restricted by procurement laws that require substantial time to execute, unless it’s one of a few entities — WestEd and county offices of education — that are exempt from the requirements. That’s why the department turned to WestEd, she said; it didn’t consider county offices.

Reynolds said private school leaders recommended a way around the procurement problem. “It was a bone of contention. We alerted the department and by March suggested a legislative fix,” he said.

The department agreed, and the Legislature included in the budget trailer bill in July to exempt some of the requirements for contracting services affecting the Emergency Assistance for Non-Public Schools, but it applies only to the next round of funding, which Congress passed as part of the American Rescue Plan last March. The state waited until close to the deadline to apply for the second round, with $181 million, and has not received approval. It will concentrate aid on schools with sizable enrollments of low-income students.

Lack of urgency by the state

Tornatore said the timing didn’t work for a legislative solution for the earlier round of funding. Reynolds said there could have been earlier legislation to apply to the first round of funding, but he doesn’t blame Tornatore, whom he said has been helpful and open to suggestions. Others in the department have not made helping private school kids whose lives have been disrupted a priority, he said. “Superintendent of Public Instruction Tony Thurmond sees his job as limited to the public sector and does not see us as partners in the education process,” he said.

In response, Thurmond issued this statement: “The effects of Covid-19 have been felt by all students, especially by the most vulnerable, regardless if they are enrolled of public or private schools. I am committed to serving all of California students. The Emergency Assistance for Non-Public Students program is a priority of mine and of the Department because, at the end of the day, all students regardless of which classroom they attend, need to receive the resources and support to recover from this very challenging period and accelerate their learning.”

Reynolds and other leaders point to several mystifying decisions as evidence of a lack of urgency.

While other states have contracted with national vendors with expertise in handling school reimbursements, the department, because of contracting restrictions, assumed responsibility. Yet, even though the department is entitled to claim $900,000 in administrative costs, it didn’t hire any additional staff.

“CDE is probably overworked as it is without additional staffing. I appreciate that,” said Domingo, “but at the end of the day, it is not getting the job done.”

Instead of simultaneously handling expense reimbursements and creating a system for providing services for students, the department approached the job sequentially. Only after all of the reimbursements were made, in November, would it turn attention to contracts with vendors.

“We made the decision to do the reimbursement before doing services based on the U.S. Department of Education guidance that this was allowable,” Tornatore said. Given the department’s capacity, it was important to complete the first challenge “with fidelity,” she said.

Alex Chacón, as president of Bishop Mora Salesian High in East Los Angeles, has felt the repercussions of delayed reimbursements and services. The college prep school for 375 boys, 95% of whom receive financial assistance, is in Boyle Heights, a low-income neighborhood where Chacón grew up. He graduated from the school, and his son attends it.

The $443,000 in funding in the first round and potentially $515,000 in the second, is huge for the school, he said, but it also has put the school in a financial bind. It spent $175,000 by July on PPE, equipment and computer software for students. “We bit the bullet assuming we would be reimbursed,” he said.

And there is more to spend, but he has to worry about making payroll. So he has eliminated expenses for homecoming and events that celebrate the school’s culture, and delayed money for teachers’ instructional materials, Chromebooks for every student and curriculum development.

With the ability to obtain services, he’d restore small cohorts for algebra lessons and expand summer school for incoming ninth graders. That’s critical, since students enroll from 55 elementary schools, and some enter with sixth-grade-level math skills.

Then there’s a need for more counseling. Boyle Heights was hard hit by the pandemic. “Our kids have faced struggles; they’re carrying a lot of weight and would benefit from speaking with a professional,” he said.

Now, he said, he’s hesitant to commit and count on more help. “It’s been incredibly frustrating,” he said.

“We understand that handling reimbursements for private schools might be foreign to the state, but there is no ambiguity under the law: the essence is to treat all students equally,” Escala said.