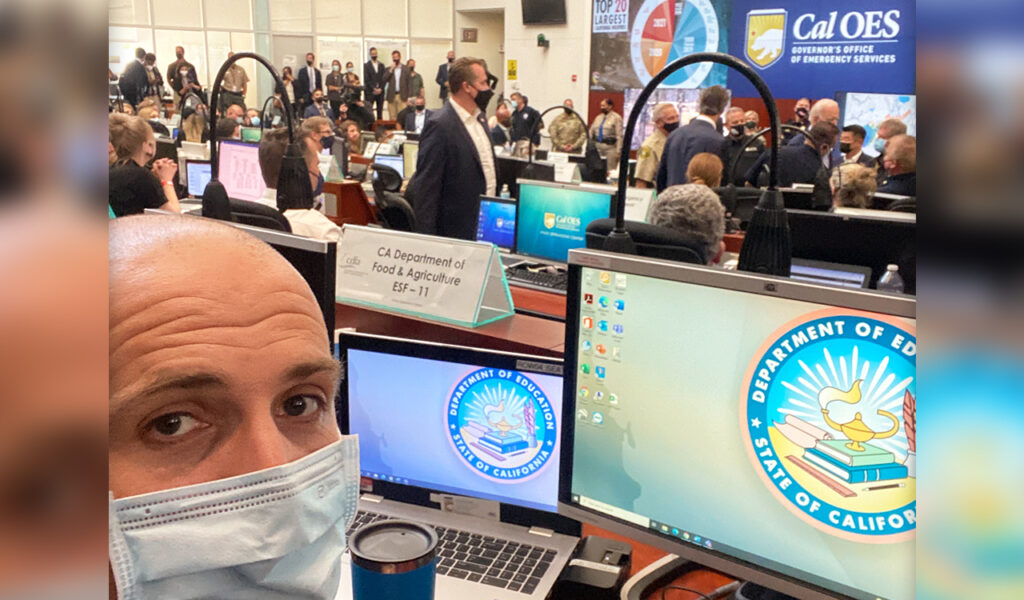 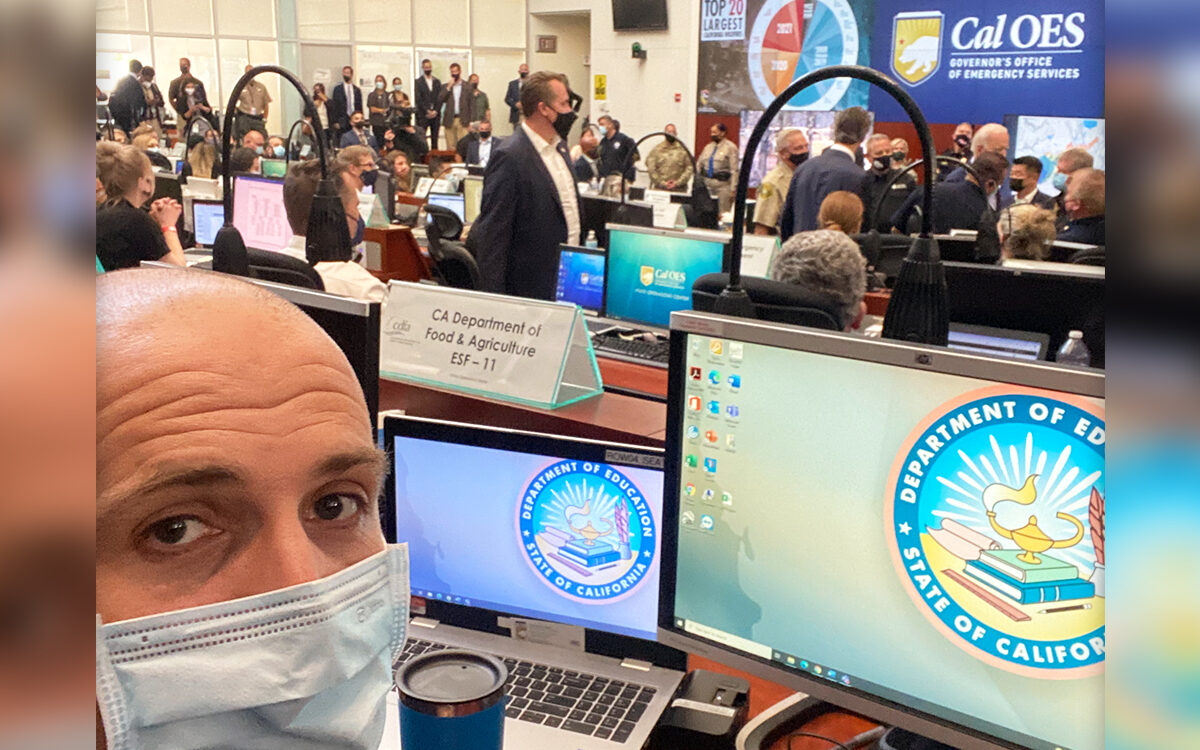 During the height of the wildfire season, Joe Anderson and Jake Wolf met virtually every Thursday morning with exhausted and bewildered school superintendents whose campuses had either been evacuated or destroyed by the wildfires raging through California.

The pair make up the California Department of Education’s Emergency Services Team, but to some school district officials assisted by them, they and their director, Juan Mireles, are affectionately referred to as the 3 J’s.

The year-old team helps school officials communicate with state and federal agencies during emergencies, gives technical assistance about accessing government funds, connects them with needed resources, offers advice on how and when to safely reopen schools and helps in any other way it can.

The team connected with school officials needing help during the weekly call, which also included state school association officials, or when district leaders reached out to them. They also monitored fires and offered advice about evacuations when flames were getting too close to schools.

“We relied on our three J’s to have these conversations about what we were experiencing,” said Plumas Unified Superintendent Terry Oestreich, whose district was evacuated and two schools closed in August because of the Dixie fire. “They advised us not to hurry the process. We are dealing with air quality, which was very bad, and we had major cleaning to do in the building.”

Oestreich first met the men in July when Tim Taylor, executive director of the Smalls School Districts Association of California, asked if he could invite them to join the Plumas school district’s virtual cabinet meeting. The district was under evacuation orders because of the fire, and the Emergency Services Team wanted to make sure district officials understood how to navigate the emergency.

“If you haven’t done this before you just stop in your tracks and don’t have any idea what you are dealing with at that time,” Oestreich said.

A week after the meeting, the Dixie fire destroyed the town of Greenville in Plumas County, razing many of its homes and businesses, as well as a charter school site. Greenville High School and Greenville Elementary had only minor damage but had to be closed because of safety hazards that result from fires, including the potential for toxins in the water supply.

The elementary students were moved to a school in nearby Taylorsville that had been closed a decade ago, and high school students were sent to the high schools in Quincy and Chester — trips that now can take two hours because of damage from the fire, Oestreich said. The Emergency Services Team is currently helping both the district and the charter school find portables to house their students in Taylorsville.

The California Department of Education formed the Emergency Services Team last October to help schools dealing with the combined emergencies of the Covid-19 pandemic, wildfires and planned power outages, caused when utilities shut down power to reduce the risk of fires.

“We’ve always noted the need to have dedicated resources to help us (with emergency management) because it’s quite time-consuming, and we all have our day jobs to do,” said Mireles, who heads up the Schools Facilities and Transportation Services Division at the Department of Education. “So that’s why we embarked on this journey, to create a team that would help us and would be dedicated to helping with the emergency management work that we do.”

Both Wolf and Anderson worked at the Governor’s Office of Emergency Services before moving to the Department of Education. Both men live in foothill counties affected by wildfires.

“I have four kids in public school right now, so it’s a little more rewarding for me seeing the things that we do pay off for my kids,” said Anderson, who lives in El Dorado County where the Caldor fire has burned more than 220,000 acres. “So, I’m definitely invested, you know, in emergency management for schools, and that’s why I’m here.”

Wolf and Anderson have had their busiest fire season yet with almost 2 million acres burned in California this year. In that time they taught dozens of districts to navigate state and federal regulations, make financial claims and meet public health and local public works requirements. They also advised them on whom to connect with for additional financial and emotional support.

The two team members are updated multiple times a day by state agencies like the Governor’s Office of Emergency Services and Cal Fire about wildfires or other hazards that may put school facilities, staff and students in danger. Together the agencies coordinate emergency responses.

When wildfires threaten communities, Wolf uses geographic information system maps to measure how far schools are from a blaze. If a wildfire is getting too close or the air quality is too poor, the team contacts school officials so they can prepare and ensure everyone is evacuated.

Taletha Washburn, director of Plumas Charter School, was connected with Wolf after the charter school’s learning center in Greenville burned down. Now they are working together to find portables to at least temporarily replace the classrooms lost in the fire. In the meantime, the students are attending school in nearby Taylorsville, where the charter school has another school site.

Wolf has sent the school air scrubbers — high-powered air filtration systems that remove air pollution and contaminants from the environment — and helped connect Washburn with agencies that can help support the school.

“It’s daunting,” Washburn said about losing a school site. “There is a lot of new weird stuff to do when you are in this position. Navigating the support system landscape is really intense.”

Washburn says she will also need Wolf’s expertise as she begins to apply for assistance from the federal government and state to help replace the school.

Wolf says his goal, when schools are closed because of emergencies, is to get students back to school as soon as possible so that teachers can educate children and build relationships with them.

“I have an aunt who has been a teacher now for 34 years in the Gridley school district,” Wolf said. “I see the amount of effort and the amount of consideration that she puts into being a teacher. And that really inspires me and what I do.”

Wolf offered assistance to Sherri Morgan, director of Long Valley Charter School in the tiny town of Doyle in Lassen County, when the school found itself in the path of the Beckwourth Complex fire in July.

“He was an amazing wealth of knowledge,” she said. “I know about school and education, but I have a lot of missing information when it comes to post-disaster action. He was great. I felt supported by him.”

Morgan said Wolf helped her understand the steps required to clean the school after it was damaged by smoke and the need to have the air systems inspected. He also helped to set up a local assistance center at the school so residents could go there to meet with state and local agencies and insurance companies to get aid.

“It was so invaluable that the California Department of Education hired folks to assist in that way,” Morgan said. “It’s sad and reassuring that they are there.”