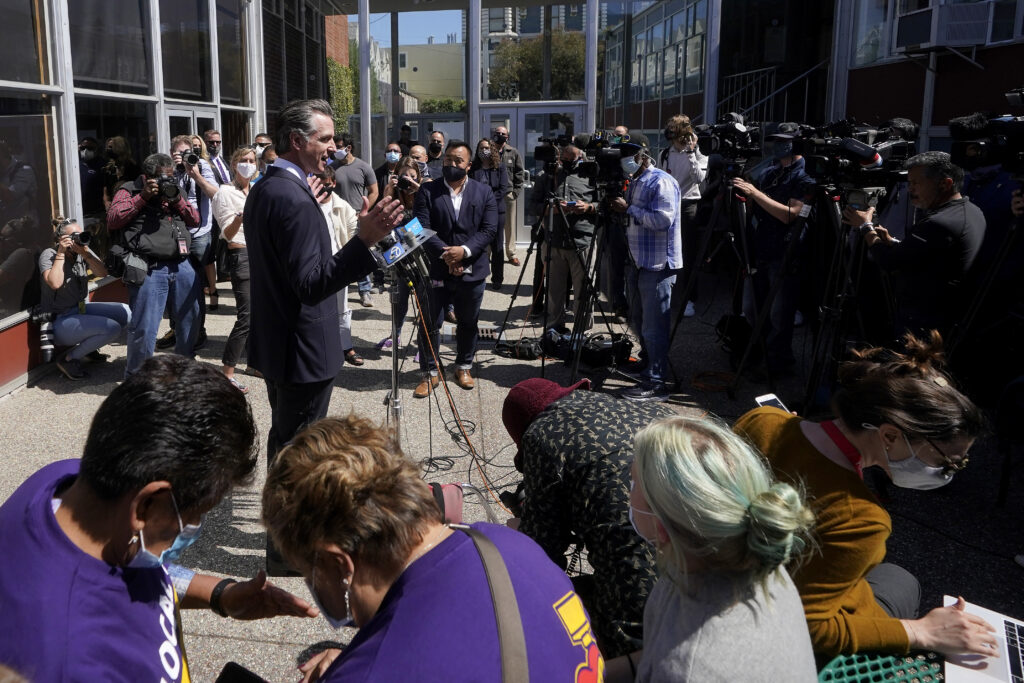 In the end, Democratic voters turn out in force behind the governor 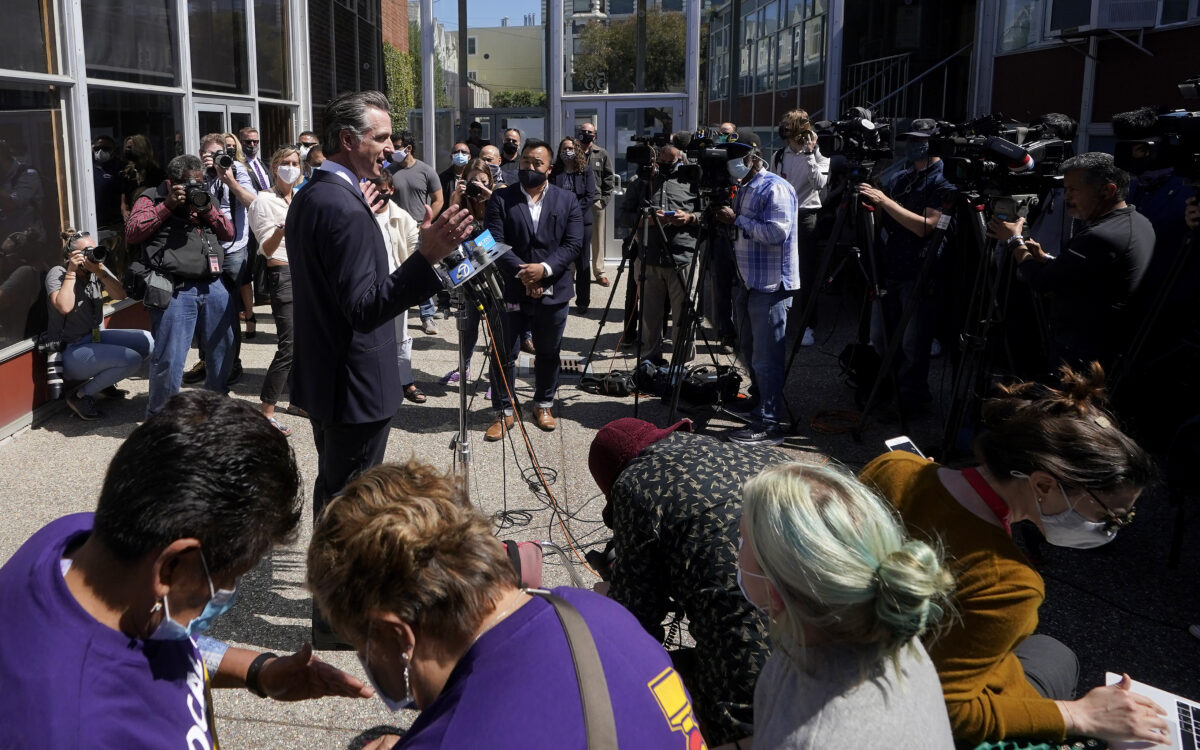 Benefiting from a dominant turnout from early-voting Democrats, Gov. Gavin Newsom has roundly defeated an effort to recall him from office with 15 months left in his term as governor.

The vote against the recall triumphed over the vote for it by about a 2-to-1 margin, 64% to 36%, with all precincts reporting partial results.  Newsom declared victory in a short speech to supporters an hour after the polls closed.

The final count is expected to tighten as votes cast Tuesday at the polls are counted, but Newsom needs only a majority vote to stay in office. Among the early votes were 1.9 million mail-in votes from Los Angeles County, the state’s largest; the no vote got 76% of the vote, with only 24% for the recall.

According to voter exit polling reported by CNN, an even larger percentage of Democrats voted against the recall (94%) than the Republicans voted for it (90%). Independents split 50-50. The difference is that California Democrats outnumber Republicans 2-to-1 in voter registrations.

View results of the 2021 California recall election at the Secretary of State’s website, electionresults.sos.ca.gov.

The Newsom campaign had worried that apathetic, ambivalent or angry Democrats might skip the election. But parents’ frustration over the slow reopening of schools last spring — a catalyst for the recall — petered out when schools fully reopened last month, aided by billions of dollars in federal and state Covid relief funding.

Newsom and Democratic leaders had become increasingly confident in the closing days of the campaign. They were buoyed by some polls showing him with a 20-plus percentage point lead and, with $70 million in contributions, an overwhelming funding advantage that enabled him to swamp his Republican opponents on TV and with internet ads.

Newsom used that advantage to turn the election into a referendum on Republican candidate Larry Elder, a conservative talk show host, and his calls for rescinding mandates on masks and Covid vaccinations for teachers and public employees, opposing abortion and other issues out of sync with most Californians. Newsom likened Elder to former President Donald Trump.

As predicted in polls, Elder is capturing the biggest share among the 46 candidates on the second question on the ballot, which was who should replace Newsom. Elder was leading in early returns, with 47 percent. An unknown Democrat, Kevin Paffrath, was far behind in second with 10%, and former San Diego Mayor Kevin Faulconer had 9%. But those votes won’t matter if Newsom prevails on the first question on the ballot — should he be recalled? No well-known Democrat had filed to replace Newsom, and the Democratic Party had encouraged voters to leave the second question blank.

In a concession speech in Southern California Tuesday night, Elder attacked the media, saying it “serves as a PR firm for the left. We may have lost the battle but we sure as hell are not going to lose the war.” He also ripped public school teachers, citing a study he didn’t name that he claimed found 15% of public school teachers nationally “are incompetent.”

“I have no idea whether that is true of California,” Elder said. “But let’s assume that it is.” He then estimated the state has roughly “15,000 incompetent public school teachers.”

Earlier in the day, he said on a radio program that he is “a new political force here in California. I am not going to leave the stage.”

Faulconer said in San Diego that he will “continue to be a fighter. California is worth fighting for.”

Cox, who Newsom defeated easily in 2018, and who opened the recall campaign accompanied by a Kodiak bear named Tag, said late Tuesday, “This state has to improve. This state has to change. I am not going to quit.”

The political website FiveThirtyEight, using an average of voter surveys, declared the recall a draw in early August. Whether some of those polls were accurate, the prospect of a conservative Republican taking over the nation’s bluest state may have scared some Democrats straight. Democrats also got a push from the top of the party — Vice President Kamala Harris, Sens. Bernie Sanders and Elizabeth Warren, and, on Monday night, President Joe Biden — who did ads or rushed to California to ratchet up the pressure to vote.

“Every incumbent tries to change a reelection campaign from referendum to a choice, and with a very significant assist from Larry Elder, that is what Newsom was able to do,” said Dan Schnur, press secretary for former Gov. Pete Wilson who teaches political communications at UC Berkeley and the University of Southern California. And he added, “National polls show significant support for Biden’s new vaccine mandate proposal. Newsom was able to turn Covid from a potential fatal weakness to an overwhelming strength through the availability of vaccines.”

From recall to choice initiative

Displeasure with Newsom’s handling of K-12 schools fueled the recall, said Lance Christensen, executive vice president of the California Policy Center, a conservative think tank in Tustin. When most schools remained closed into April, “the fervor accelerated,” he said. Then, as the signature-gathering gained momentum, Newsom “unwound the restrictions” preventing reopening, he said, asserting a cause and effect. And anger dissipated when Newsom and the Legislature ended distance learning as an option and made it clear students would return to school this fall, he said.

“The dynamics in the spring were different, when parents were impatient,” said John Rogers, professor of education at UCLA and the director of the UCLA Institute for Democracy, Education, and Access. Now, he said, “most of the public appreciated Newsom’s encouraging vaccines and safety mandates as necessary.” And, he said, “the vast majority of the public in California does not want the battles playing out in Florida and Texas over masks, district by district, or over vaccines. People are ready to move on, which would not have happened if there were a Republican governor.”

Christensen said that regardless of Tuesday’s vote, a movement to place a school voucher measure on the November 2022 ballot was a winner. All the top-tier Republican candidates made it their No. 1 issue, and parents who are normally not political “made it their rallying cry.”

“I think the recall campaign scored lots of points for school choice,” he said.

Carl Cohn, a former member of the State Board of Education and retired superintendent of Long Beach Unified, agreed that some Democratic voters who voted for Newsom in 2018 were upset last year over how long schools remained closed, forcing them to stay home to take care of kids in distance learning. But in the end, he said, they probably “held their nose and voted against the recall.” Like Christensen, he said the action will now pivot to the 2022 initiative for a school voucher, also called an education savings account, and he said he’d bet some Democrats will be among those gathering signatures.

Pat Reilly, a political consultant and cofounder of Open Schools California, a group formed in response to the slow reopening of schools, said “the landscape of parent engagement has changed” because of the “gaping holes in policies and protections for our students” that the pandemic exposed.

His victory in the recall election presents Newsom “with an opportunity to use his political capital in a positive way to have a meaningful conversation with parents,” she said. “Go on a listening tour to learn what their children experienced last year.”