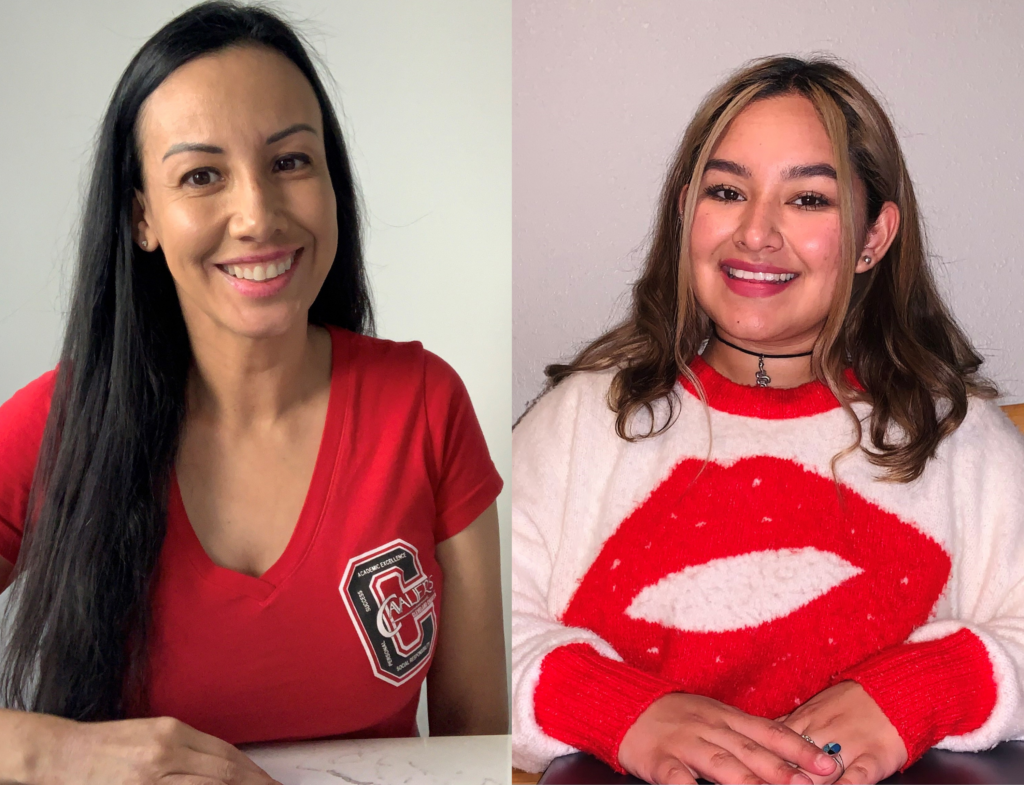 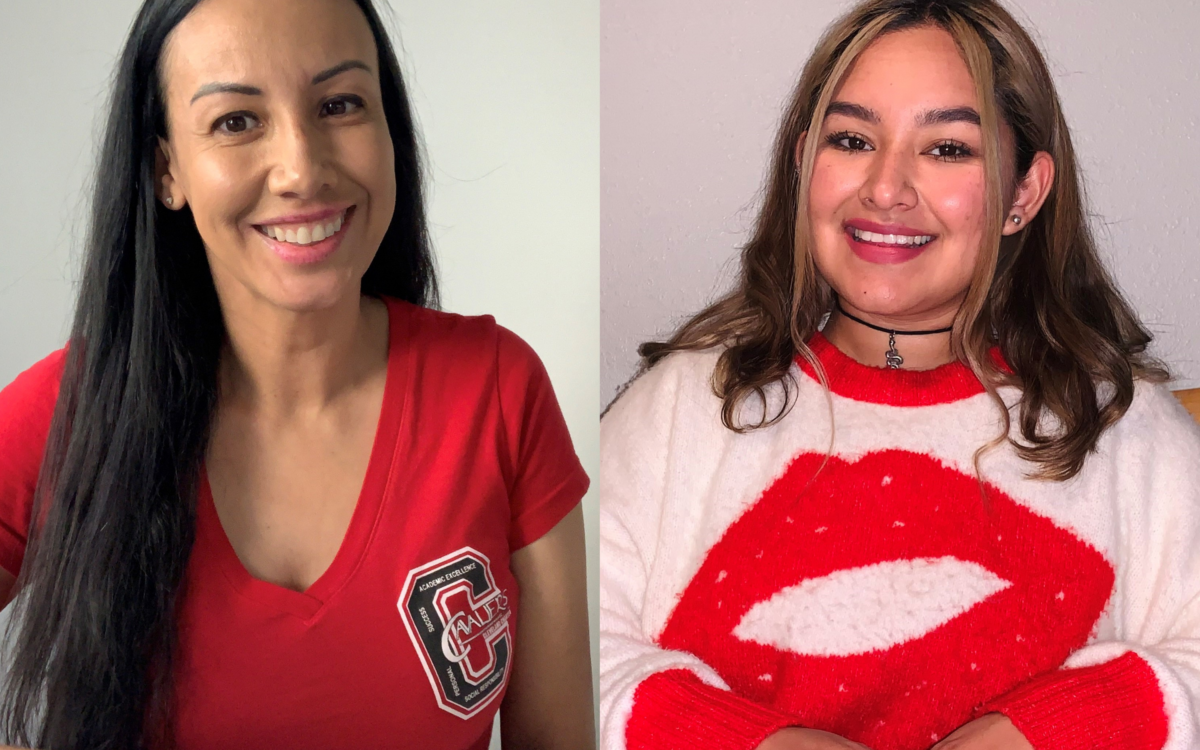 Credit: Courtesy of Jancy Amaya & Fernanda Salazar
Jancy Amaya, left, is a newcomer instructional coach with the Los Angeles Unified School District, where she has helped immigrant students like Fernanda Salazar, right, learn English and adapt to her new school.

Credit: Courtesy of Jancy Amaya & Fernanda Salazar
Jancy Amaya, left, is a newcomer instructional coach with the Los Angeles Unified School District, where she has helped immigrant students like Fernanda Salazar, right, learn English and adapt to her new school.

Fernanda Salazar, 19, struggled to learn English after moving from Guatemala to Los Angeles about three years ago. She was finally feeling like she was able to communicate freely with classmates and teachers when the pandemic hit and learning became a mix of new school schedules, video calls and virtual connections.

Several school districts across California reported that when the pandemic hit, many students who recently immigrated to the U.S. were not attending online classes regularly or were failing to turn in assignments. Some districts, including Fresno and Oakland Unified, have programs to help these students by offering coaches or peer mentors to help them navigate a new school system, do well in school, and stay enrolled. Some of these programs existed before the pandemic, but they have been crucial guides for students after campuses closed last spring.

“After the months went by, I felt I was going to fall into depression because I can’t do this anymore,” said Salazar, explaining that she felt suffocated by having to stay home all day, every day. “And then I stopped turning on my camera. I was just on the bed, trying to do homework, trying to keep going. I just wanted to lay down on the bed while on Zoom.”

Los Angeles Unified, the largest school district in the state and second largest in the nation, has about 12,500 students who immigrated to the U.S. in the last three years, often referred to as international or “newcomer” students. The majority are enrolled in kindergarten and 1st grade, or in the first two years of high school. To try to help these students the district assigned instructional coaches and counselors to schools with the most newcomer students. Starting with 10 to 12 coaches and counselors during the 2017-18 school year, the program has now expanded to 18 coaches.

Los Angeles Unified tracks the attendance and participation for newcomer students with English learners as one group, which disproportionately has had low rates of active participation in online learning through the past year. While rates improved from the spring of 2020 to the fall of 2020, they were still disproportionately behind other students, according to district data.

The low attendance and participation rates of newcomer students could be traced to multiple factors, including lack of internet and parents’ unemployment. Immigrant communities have been infected with Covid-19 at higher rates, meaning that many of these students, their family members or their friends, have struggled with the disease. Many immigrant parents have lost work and have not been eligible for federal stimulus payments. With many adults unemployed, older immigrant students often feel pressure to work to help support their families.

The coaches in Los Angeles Unified have been instrumental in helping newcomers stay connected during the pandemic. Jancy Amaya, the coach at Cleveland Charter High School in the San Fernando Valley, where Salazar is enrolled, worked to foster a sense of normalcy and community for students like Salazar, who were losing interest in school.

At the beginning of the pandemic, that meant translating for students when they went to campus to pick up their devices and helping them join their classmates online. Amaya also created an Instagram account specifically for newcomer students at the school. There, students can access information about free meals, their language assessments, and other resources specific to their needs.

Immigrant students by the numbers:

“When I started that Instagram account, I got a flood of questions online from students. They just feel more comfortable communicating that way,” Amaya said.

A year into the pandemic, that support from Amaya now includes a stronger emphasis on trust-building. The new students who arrived during distance learning have never met her in person, prompting her to work harder to connect with students while understanding they have stressors that other students may not, such as working to pay for immigration attorney fees, or having survived violence in their home countries or along their journeys to the U.S.

Anecdotally, she noticed that fewer newcomer students enrolled this past year. She typically welcomes anywhere from 60 to 90 students, but this year she said only about 15 students have arrived at her school. The enrollment may have to do with the pandemic, but also may be related to former President Donald Trump’s changes to immigration policy, which limited the number of asylum-seekers and refugees.

Amaya also works with the students’ teachers to help prepare students for their English language assessments. She practices English with students and encourages them to continue showing up to class even if they are working to help support their families. She also helps them understand life in the U.S., such as why and how certain events like Valentine’s Day or Martin Luther King Jr. Day, are celebrated.

“I don’t know if I could survive the way that they are,” said Amaya, the daughter of Salvadoran immigrants who left during their country’s civil war in the 1980s. “And to know the hardships that we see on the news every day of how kids are coming and why they’re leaving their countries, and despite all of that are able to express themselves in English.”

Amaya had been helping Salazar long before the pandemic. Shortly after Salazar migrated, her mother was deported to Guatemala, so she moved in with her father and took the primary role in caring for her younger siblings while attending school.

“I was struggling with my mom not being there for me, and then taking care of my brothers because I needed to take her role,” Salazar said. “So it was hard for me to be in school and then being kind of like a mother for them and then trying to learn a new language. And I just wanted to interact with people, but it was hard because I didn’t know how to do it because I couldn’t talk.”

Prior to the pandemic, Amaya arranged presentations and field trips for the newcomer students, and Salazar often took advantage of those opportunities. Socializing on these trips helped her feel less lonely, she said.

“Fernanda was a student who said yes to it all,” Amaya said. “There were STEM conferences that we would find out the day before, and she’d have the permission slip the next day. She was always a go-getter about it, hungry to learn more and do more. And I was happy to provide those experiences for her.”

One of those presentations that Amaya hosted was about the opportunities and support she could receive if she attended college, which piqued Salazar’s interest.

Amaya also helped Salazar prepare for the English Language Proficiency Assessment for California, or ELPAC, a statewide test that the school uses to classify students into one of four English Language Development classes depending on their level of proficiency.

“At the beginning it was hard because I didn’t know the language and I just wanted to interact with people, but I couldn’t,” Salazar said. “Learning English and wanting to be in more advanced classes was hard since I couldn’t just jump in those classes.”

Support for Immigrant and Refugee Students (from Californians Together)

Gradually, though, Salazar learned more English and was eventually placed in the highest level English development class the following year. When the pandemic made it hard for Salazar to stay motivated, the support from Amaya helped.

Other districts in California have also worked to try to keep newcomer students enrolled or attending class during the pandemic. Fresno Unified has trained high school students who used to be English learners and are now considered proficient in English to be mentors for newcomer students. The mentors check in with their newcomer peers every week, allowing them to both practice their English and get help with school.

The peer mentors have also been key in helping reengage students who were not participating in distance learning. In one case, a newcomer student had not been communicating with teachers or connecting to his classes, said Sandra Toscano, assistant superintendent of English learner services for Fresno Unified.

“The school made multiple attempts to reach the family, with no success,” Toscano said. “We reached out to the assigned mentor, and within hours, he was able to connect with the student and get him to check in with his teachers. Since then, he has connected regularly, partially due to the accountability shared amongst their peers.”

In Oakland Unified, newcomer students in high school have one of the lowest rates of attendance, with almost one-quarter not attending class regularly, according to a recent report from the superintendent. Nate Dunstan, program manager for refugees and newcomers at Oakland Unified, said many immigrant high school students have gone to work during the pandemic to help their parents who have lost their jobs.

He said many families now owe thousands of dollars in rent. Dunstan said Oakland Unified has distributed close to $300,000 in $500 payments to help students and families that are struggling to find work or put food on the table. In some cases, that help has supported students enough for them to reenroll in high school after having dropped out. The district is also in the process of hiring a staff person to help reenroll newcomer students who dropped out of school and who face additional struggles to graduate.

For Salazar, the information provided by her coach cemented her resolve to apply for college. She has now applied to seven schools and been accepted to five. She’s holding out for an acceptance letter from UC Berkeley, and she said the support from Amaya and her instructors changed her life. Salazar said because of their help she has learned as much English as others who have been in the U.S. for longer.

“I have no idea where I would have been without them, without their help,” Salazar said.