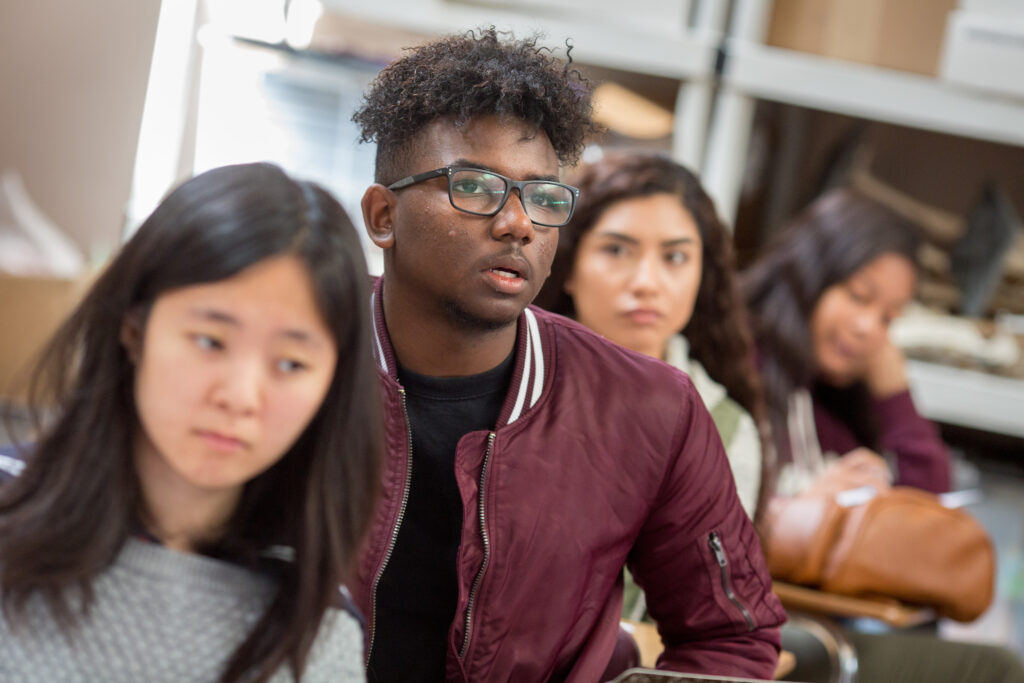 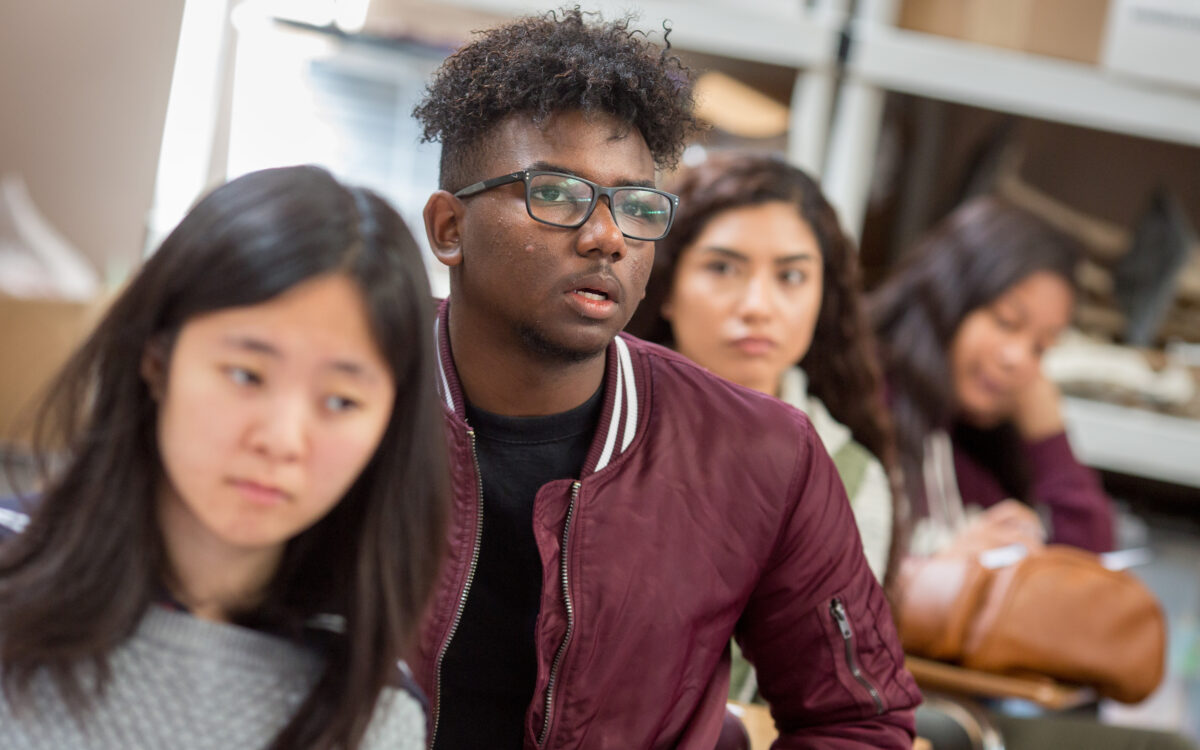 Photo by Allison Shelley for EDUimages
A high school student listens to a presentation by his classmate.

Photo by Allison Shelley for EDUimages
A high school student listens to a presentation by his classmate.

Responding to acrimonious debates over history and politics nationally and in school boards across California, some of the state’s leading advocates for civics education are urging schools to equip students with democratic principles and practices to counter growing “anti-democratic forces that threaten the stability of our fragile republic.” 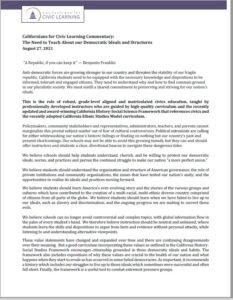 “Political extremists are calling for either whitewashing our nation’s historic failings or fixating on nothing but our country’s past and present shortcomings,” said the statement by a new organization, Californians for Civic Learning. While schools may not be able to avoid “the tumult,” they can and should provide ways to “navigate these dangerous tides,” the statement said.

The three-page statement ends by calling on school boards, superintendents, school communities and business and civic organizations to support policies to teach civics in every grade with adequate instruction time and professional development for teachers. The state currently requires that students take only one semester of a high school course in civics.

The release of the document to EdSource coincides with heated discussions locally over the adoption of ethnic studies curriculums. Meanwhile, former President Donald Trump continues to deny he lost the 2020 presidential election, and his allies are repeating conspiracy theories and calling for bogus state recounts.

“What is happening is frightening, given the collapse of democracies around the world. People think (those scenarios) are impossible here, but it really isn’t,” Gordon said.

After multiple drafts that were extensively revised over two years, the State Board of Education adopted a compromise ethnic studies model curriculum in March that emphasizes the history, culture and oppression of Blacks, Latinos, Native Americans and Asian Americans. It provided guidance but left it to local boards to decide the content. So far, in many districts, that has not gone well. A course that the Legislature intended to build understanding and empathy among students with diverse backgrounds has precipitated conflicts among adults.

In politically conservative Ramona Unified in San Diego County, the school board adopted a civics education course that promotes patriotism while tightly restricting what can be taught about racism.

In the progressive Bay Area district of Hayward, the board largely adopted the “Liberated Ethnic Studies” curriculum, the original, subsequently rewritten draft of the state model curriculum. It was widely condemned for its bleak view of race relations, its leftist critique of capitalism and its focus on white oppression and resistance movements against it.

The Californians for Civic Learning statement doesn’t take sides; it criticizes both approaches while advocating for the adopted ethnic studies model curriculum.

“We reject the ideas of those that advocate for: the idea that American democratic ideals and institutions are corrupted beyond repair; and discounting the progress the nation has made in becoming a more perfect union (granting that we still have a long way to go),” it reads.

Then it adds, “We reject the ideas of those who seek to: refuse to address continuing injustice and racism in the past and present; and pass dangerous laws and school policies prohibiting content that doesn’t support their views.”

Instead, the signers call for middle ground: “Students should learn when we have failed to live up to our ideals, such as slavery and discrimination, and the ongoing progress we are making to correct these evils.” The way to do this is through unbiased instruction where students learn “to argue from facts and evidence without personal attacks, while listening to and understanding alternative viewpoints.”

Herczog said that one impetus for promoting civics education now is that superintendents, administrators and teachers find themselves “in the middle of the culture wars.”

“We’re giving a perspective on what we believe in, what ideas we don’t believe in to maybe help some of these educators, give them some cover to say, ‘Hey, I’m not alone out here. Here’s another group that is presenting these ideas.’”

That perspective can be useful in a place like Fresno, a purple region in a blue state that, Nelson said, “is at the intersection of a changing racial demographic and changing political demographic where people are examining deeply their values.”

“My honest feeling is that the most productive work which benefits kids is somewhere between the extremes of right and left. So how do you teach kids that sitting in your armed camp is not always the most productive use of your time, because you’re alienating people who don’t see the world through the same lens as you?” he said.

“We have to create a counter narrative that somewhere between multicultural education and critical race theory, there’s something really good for kids where they see themselves in the learning. That’s what ethnic studies is supposed to do,” he said.

Manuel Rustin, who helped oversee the creation of the model ethnic studies curriculum as a member and current chair of the Instructional Quality Commission, said the Californians for Civic Learning statement was generally right but mischaracterizes how some educators allegedly approach the topic of race.

“It certainly approaches the ‘common ground’ idea better than most have tried to express it. They’re standing up against whitewashed history and they are encouraging educators to not shy away from teaching the truth about racism,” he said.

But the statement’s assertion that some educators are “instilling collective guilt in today’s children” and “believing that any one identity is the only lens through which to view our history” gives credibility to the idea that this actually happens, he said. Rustin, a high school history and ethnic studies teacher in Pasadena Unified, said he’s never heard of an educator who teaches that.

Honig, who also chaired the Instructional Quality Commission during the 2016 adoption of the History and Social Studies Framework, agreed that the practices are not widespread, but have occurred, and the statement cautions against that approach.

Tyrone Howard, a professor in the Graduate School of Education and Information Studies at UCLA, where he founded and directs the Black Male Institute, said he welcomed the new organization’s strong voice for civic education, but amid the incidents of violence and backlash against communities of color, he was looking for a stronger and bolder statement and a more diverse group of signers.

Three times in the Californians for Civic Learning statement, the authors recommend using the California History-Social Science Framework as a guide for seeking common ground and as “a useful tool to combat extremist pressure groups.”

The 2016 document provides not only a comprehensive grade-by-grade guide on what to teach in American history but also how to help students acquire the historical skills of critical thinking, independent inquiry, examining multiple perspectives and arguing from evidence. The state board, in advising the Instructional Quality Commission on writing the ethnic studies model curriculum, said it should “when appropriate, be consistent with the content and instructional shifts” in the history and social studies framework.

Rustin and Honig, who contributed to the framework when chairing the Instructional Quality Commission, praise the document. So does Dan Thalkar, a U.S. history and ethnic studies teacher in Los Angeles Unified, who said it complements ethnic studies instruction. But because there hasn’t been regular funding to train teachers in the framework, it’s “vastly underused,” he said. “I have not met many other history teachers who have looked at it.”

Like other districts, Fresno Unified is in the process of writing its own ethnic studies curriculum, and the committee charged with writing it has struggled, just as the state Instructional Quality Commission did, with competing visions of what it should be, Nelson said.

The internal tensions in Fresno will soon be replicated across the state, if, as anticipated, Gov. Gavin Newsom signs into law Assembly Bill 101, authored by Assemblyman Jose Medina, D-Riverside, requiring all high school students to take a semester of ethnic studies. Although it won’t take effect until the graduating class of 2029-30, Newsom’s signature would release $50 million in the 2021-22 state budget for county offices of education and districts to develop their own curriculum. That’s 10 times what Gordon, Herczog, Honig and others have asked the Legislature for to fund civics education instruction — so far, to no avail.

The competition for funding could be intense. The advocates of the Liberated Ethnic Studies Model Curriculum include the contributors to the much-criticized first draft of the state model curriculum. They’ve disavowed the final version for diluting their vision and had a head start last summer on selling their version to teachers and districts. Now, competing versions are emerging, like FAIRstory, by the New York-based Foundation Against Intolerance and Racism, whose advisers include authors John McWhorter and Andrew Sullivan, psychologist Steven Pinker and journalist Megyn Kelley. It promotes its “balanced” curriculum that teaches historic and contemporary racism while “presenting an honest and accurate view of our nation’s history while emphasizing constructive principles that inspire optimism for the American future.”

Herczog’s advice is for districts to move slowly since money will available for several years. “Invest time now in setting the stage with your teachers” on how to conduct conversations in classrooms about controversial topics “without things blowing up,” she said. “Teachers are getting more nervous about doing it. Everything is a lightning rod right now.”