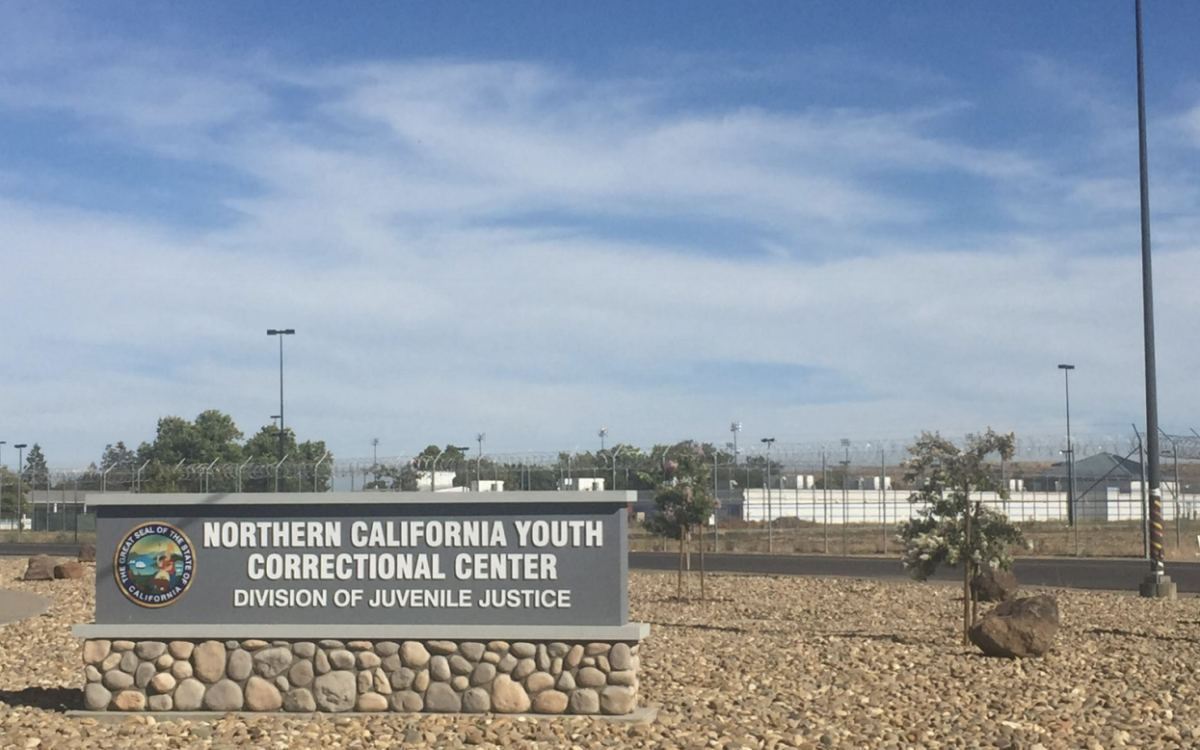 California sought to reform its juvenile justice system by housing young people closer to their communities in facilities that are intended to replace the youth prisons run by the Department of Juvenile Justice. If Los Angeles County’s experience is any indication, making that shift is more difficult than expected.

These changes to the system are a result of Senate Bill 823, which Gov. Gavin Newsom signed last year. The bill requires the state’s youth prisons to shut down by 2023 and has stopped allowing counties to send youth to the state Department of Juvenile Justice (DJJ) as of July 1, 2021.

“This move to close DJJ comes at a time when there’s a broader reckoning within the realm of youth justice about where we’re placing our youth and for how long,” said Renee Menart, communications and policy analyst at the Center for Juvenile and Criminal Justice, a nonprofit organization that pushes to reform the system.

Young people sent to the state prisons range from ages 15 to 25 and are adjudicated by the juvenile court for serious or violent offenses, such as assault, robbery, or homicide. At its peak in 1996, about 10,000 youth were incarcerated at state-run facilities. As of last year, the system had seen a population decline of 93%, with about 750 youth confined.

A disproportionate majority of the youth in state facilities, 88% in 2020, are Black and Latino, and the largest number of youth are typically sent from L.A. County.

The reality at the county level is that not all the existing facilities have the infrastructure or systems in place to provide the “least restrictive appropriate environment,” as SB 823 intends. Such an environment would be as minimally punitive as possible while remaining appropriate and safe for the youth, the staff and the surrounding community. The bill also sought to “reduce the use of confinement by utilizing community-based responses and interventions” and to provide counties with funding to fulfill the bill’s requirements.

While counties have until Jan. 1 to submit their plans to the state, some counties, including Los Angeles, already have youth who would have been sent to the state but are currently sitting in local detention waiting for assignment to county-based facilities.

Los Angeles county’s juvenile halls and camps have both been used for years to house young people charged with nonviolent crimes. Now, with SB 823, the county would also need to house those charged with serious or violent crimes.  Advocates seeking to change the juvenile justice system want to use some of the county’s camps that offer more homelike environments, but some residents who live nearby are opposed. That community opposition has primarily surfaced in Santa Clarita, which is nestled at the edge of the Angeles National Forest, where some residents cited a lack of transparency in developing the recommendations and fears of a potential rise in crime in surrounding communities.

Newsom first suggested shutting down the state youth prisons in May 2020 and shifting the housing of the incarcerated youth to the counties with little notice. Some critics of the juvenile justice system pushed back, citing concerns that if alternative county facilities were not ready, the young people could end up in state adult prisons. They argued that sending them to adult prisons would stymie their own rehabilitation.

“Unless and until we develop a viable alternative to DJJ that judges can take seriously for kids that commit the most serious crimes, it is a fool’s errand to shut down DJJ, at least if you value the lives of these young people,” said Frankie Guzman, senior director of the Youth Justice Initiative at the National Center for Youth Law. The compromise was to delay the shutdown of state facilities to 2023 to provide counties some time to prepare.

Guzman, who as a teenager was incarcerated at a state youth prison, was involved in the effort to slow down the closure of the state prison system in order to introduce legislation accounting for the care and treatment of young people at the local level.

“The move toward trauma-informed home settings is relatively new,” Menart said, referring to a public health approach that recognizes a person is likely to have experienced trauma which could play a role in the person’s behavior.

Existing facilities, with their barbed wire and lack of privacy, do not meet the current push for environments that focus on therapy and care, she added.

Support for this different approach to juvenile justice “is more recent than when many of these facilities were built,” Menart said.

In L.A. County, nearly a dozen young people who would have been sent to a state youth prison without SB 832 in place are currently at one of the county’s eight youth facilities: Barry J. Nidorf Juvenile Hall in Sylmar, located in northern San Fernando Valley.

But, it’s also a juvenile hall that last month was deemed “unsuitable for the confinement of minors” by the state Board of State and Community Corrections, the regulatory agency’s first-ever such finding since it was founded nine years ago to oversee adult and youth facilities.  The board found the facility out of compliance with various requirements. The report concludes that monitoring the use of psychotropic medications prescribed for mental health needs “remains a deficiency” and that the required health assessments of every new youth entering the facility are taking longer than the 96-hour limit.

The county Probation Department, which runs the facility, has been given 60 days to correct the violations.

The same facility was included in a complaint filed in California’s Superior Court on Jan. 13 after a two-year U.S. Department of Justice investigation found that juvenile hall staff have used excessive force, denied youth access to basic needs such as bathrooms and appropriate bedding, and failed to provide legally required education services.

“The juvenile hall setting, in particular, is not conducive to providing effective treatment for mental health issues,” the director of the county’s Department of Mental Health wrote in an April 2019 letter quoted in the complaint. “Progress made in treatment is quickly eroded as the youth may be repeatedly triggered and re-traumatized by the environment. Because of a lack of privacy and a therapeutic treatment space, youth are not able to fully participate in treatment.”

Initially, the work group recommended Camp Kenyon Scudder and Camp Joseph Scott, both in Santa Clarita where community opposition in June led to a change to Camp Kilpatrick in Malibu.

By late July, L.A. County Supervisors Holly J. Mitchell and Sheila Keuhl introduced a resolution recommending the temporary use of Camp Kilpatrick in Malibu for 40 male youth and Dorothy Kirby Center in Commerce as a permanent location for up to 15 girls and young women.

After three votes, the supervisors in mid-September unanimously decided to temporarily use Camp Kilpatrick.

But as of last week, young people who, per the board’s approved resolution should be at Camp Kilpatrick, remain at Nidorf Juvenile Hall.

“We are currently working with our county partners to prepare for this population,” said a spokesperson for the county Probation Department when asked for a timeline on transferring the youth to Camp Kilpatrick.

The Camp Kilpatrick site, however, is not without its own issues.

The county spent nearly $50 million redesigning the facility to replace its boot camp style and reopened it in 2017 “based on research on how to support high-need young people who have suffered trauma, who have been caught up in the legal system,” said Julio Marcial, vice president of strategic partnerships at the Liberty Hill Foundation, a philanthropy with a focus on social justice causes.

Youth assigned to the facility can wear their own clothing rather than uniforms and live in small cottages in groups of eight to 12. The camp’s focus is on rehabilitation and group therapy, rather than punishment.

It was L.A. County’s first facility under the “L.A. model,” a re-imagined juvenile system “characterized by a culture of care rather than a culture of control,” according to a policy report by the California Wellness Foundation and the Children’s Defense Fund, California, nonprofits that promote policies to support high-needs children.

The report concludes that there is a “direct link between deeply rehabilitative juvenile justice interventions and improved public safety, providing the foundation for a shift in thinking about the operation of long term secure juvenile facilities.”

But a deadly fire tore through the Malibu area in 2018, prompting the evacuation of all who inhabited Camp Kilpatrick. The pandemic followed, further delaying a reopening of the camp.

Even by 2018, about a year into its reopening, concerns were being raised about the effectiveness of the camp.

About three months before the fire-related evacuations, a probation commissioner noted several problems that the L.A. model was supposed to eradicate, including: “extensive use of psychotropic medications,” “not a single special education teacher on staff” despite over half of youth at the time being considered “severe special education youths,” and limited programming available during nonschool hours, which led to boredom and fights.

Still, local stakeholders are hopeful that SB 823 could be what spurs the L.A. model to become fully implemented and achieve its goal of overhauling the local justice system.

Until then, the county, along with the rest of the state, has until Jan. 1 to submit final plans for permanently housing youth who would otherwise be in one of the state’s facilities.