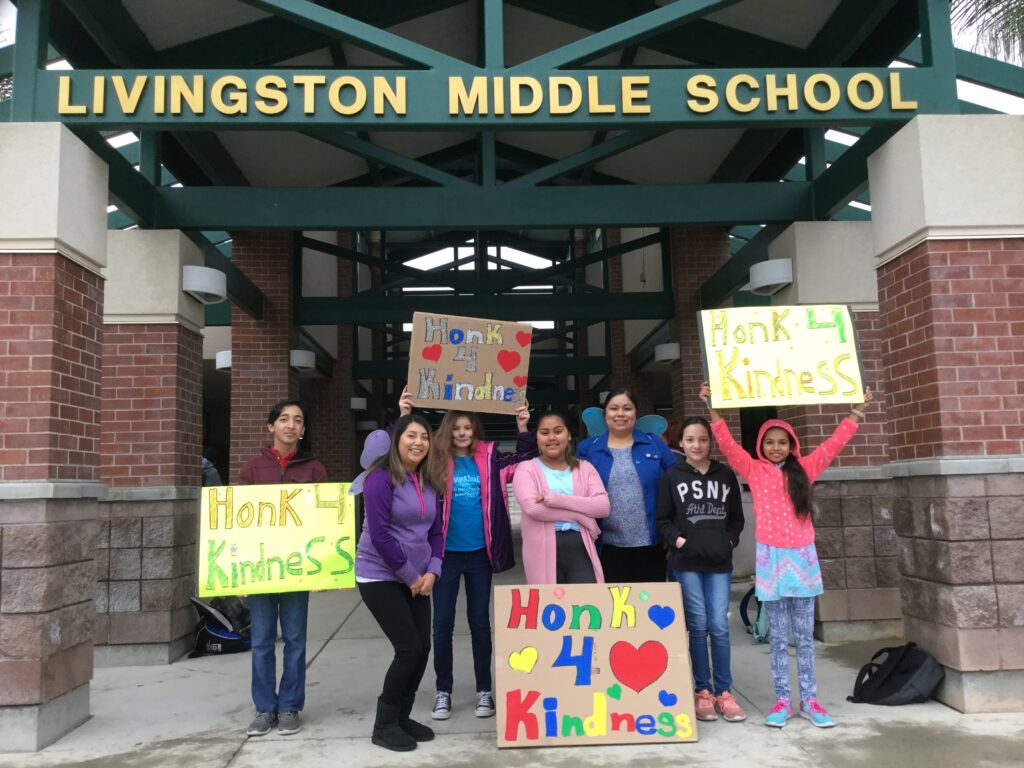 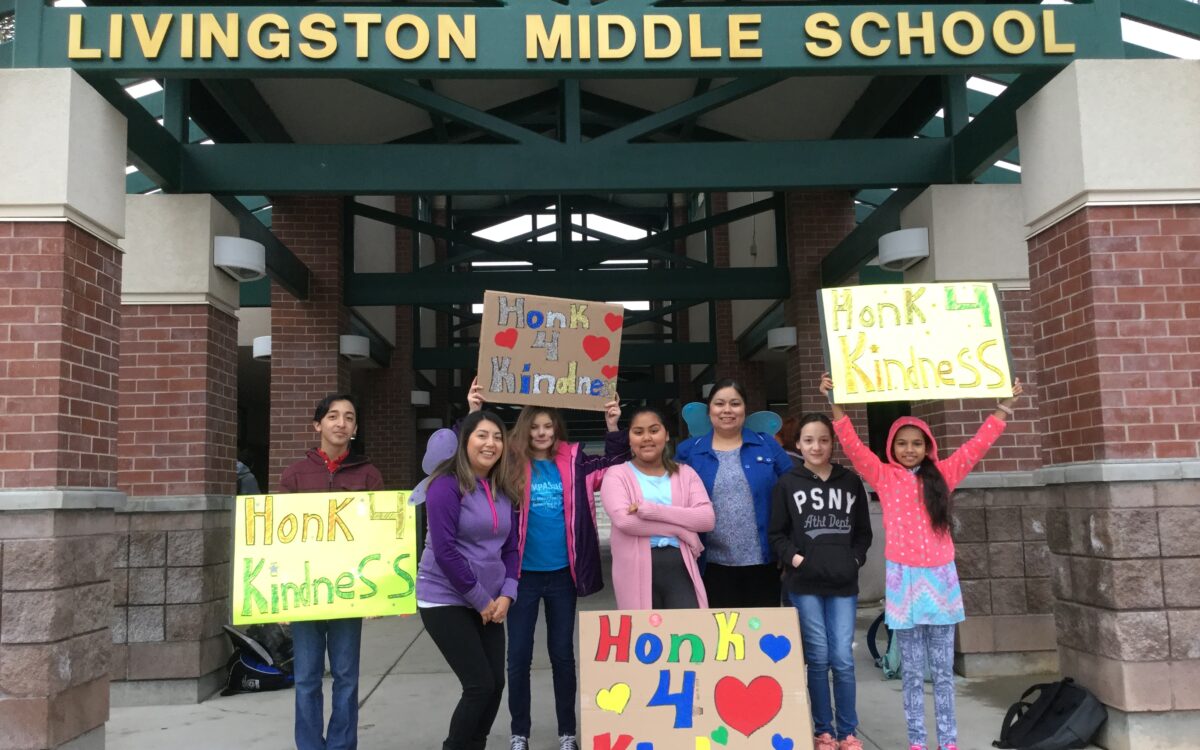 Photo courtesy Alma Lopez
The importance of kindness is one of the initiatives that Alma Lopez leads at Livingston Middle School.

Photo courtesy Alma Lopez
The importance of kindness is one of the initiatives that Alma Lopez leads at Livingston Middle School.

When Alma Lopez was in middle school in the Central Valley, she learned about college for the first time, not from her teachers or counselors, but when she saw someone wearing a Fresno State T-shirt.

Until then, she did not know what college was. But that T-shirt made a deep impression, offering a glimpse into opportunities she did not know existed. Lopez later earned two degrees from Fresno State and now works as a middle school counselor herself, ensuring that middle school students are well familiar with college and career options long before they’re seniors.

“I don’t want kids to see a T-shirt and wonder, what’s that? I want them to see themselves at these colleges. I want them to think, ‘Could I be an architect? An engineer? A teacher?’” said Lopez, who works at Livingston Middle School in Merced County. “A lot of families in our district moved to the U.S. in search of a better life for their kids. As someone who’s been there, I want to make sure every student has the opportunities they deserve.”

Lopez’s efforts to change the trajectories of her students won the attention of the American School Counselor Association, which last month named her National Counselor of the Year. Lopez is the first Californian, the first Latina and one of the first rural counselors to win the honor.

Valerie Hardy, a member of the association’s selection committee, praised Lopez’s deep commitment to her community and her “relentless focus” on helping her students. “As a first-generation college attendee, Ms. Lopez serves as an inspiration for her students, her community and the profession,” Hardy said.

The daughter of immigrants from Mexico, Lopez grew up in Lathrop, south of Stockton in the Central Valley, with her parents and four siblings. Her father, who worked as a construction laborer, didn’t attend school past sixth grade. Her mother, a housewife, never made it past second grade.

Lopez described her parents as “brilliant people” who made enormous sacrifices for the sake of their children. But the lack of formal education prevented them from reaching their potential. “If they had a chance, they could have achieved so much more,” she said.

After receiving bachelor’s and master’s degrees from Fresno State, in 2006 Lopez accepted a counseling job in Livingston, a close-knit, rural farming community known for its sweet potatoes and vineyards. When she was hired, Lopez was the only counselor for 2,500 students in kindergarten through eighth grade, spread over three elementary schools and a middle school. More than 80% of the students are from low-income immigrant families from Latin America or South Asia. Half are English learners.

“The needs are many. … Some students have endured hardships I can’t even comprehend,” Lopez said. “But I fell in love with the Livingston community. It reminded me of my own childhood in the rural valley. There’s a strong sense of family, and everyone takes care of one another.”

Despite the challenges, Lopez was undaunted. Although she saw some students one-on-one, she focused most of her efforts on schoolwide activities that could reach the largest number of students. She conducted large-scale events and campaigns focused on substance abuse prevention, anti-bullying and everyday kindness. She spoke to classes and small groups, relied on local nonprofits such as food banks and health clinics to help struggling families, and arranged frequent tours to University of California Merced, UC Davis and other colleges.

But when California enacted its Local Control Funding Formula for schools in the early 2010s, Lopez saw an opportunity to revolutionize counseling services for her students. She lobbied the superintendent and other school leaders to use their newfound budget flexibility on student mental health and wellness, which Lopez saw as crucial for students’ success.

“I told them we could have a huge impact if we invested in more counselors. If we had the staff, we could really do a lot with suicide prevention, teaching empathy … and they agreed with me,” Lopez said. “They said, ‘We’re going to invest half a million dollars in school counseling. Let’s make an impact in the lives of our kids.’”

Livingston now has five counselors for its K-eight student population, and Lopez has designed a comprehensive, districtwide counseling program that serves students as well as their families. The investment appears to have paid off. Livingston Union School District has a chronic absenteeism rate and suspension rate that is far lower than the state average, and English and math standardized test scores are consistently improving, according to the California School Dashboard.

Gurleen Bassi is among the students who say Lopez changed their lives. As a shy eighth grader, Bassi fell into a funk when her grandmother died and her family planned to move to Washington. It all happened so quickly that Bassi felt bereft and alone.

“It was such a weird time. I felt the world was going to stop,” Bassi said recently.

But just before she left, Lopez discreetly handed Bassi a packet. Inside were dozens of cards and letters from her classmates wishing her well. Bassi still has the packet and credits Lopez with getting her through a terrible time in her life, even when she was no longer a student in Livingston.

“She kept in touch, asking me how things were going, what I was up to. She made me feel so supported,” Bassi said. “She guided me out of my shell and got me through such a hard time in my life.”

Bassi is now in college in Washington, studying radiology. She likely wouldn’t be there without Lopez’s encouragement, she said.

Alejandra Sicairos has a similar story. As a middle school student, she struggled with a variety of personal obstacles and found it hard to focus on school. In her gentle way, Lopez made it clear that Sicairos could visit the counseling office whenever she wanted.

“Miss Alma made her office a safe place. If I was having a hard day, I could just go there — she had puzzles, magazines, a tissue box. It was what I needed,” Sicairos said. “She also gave me the confidence to push myself and pursue harder classes.”

Sicairos is now a freshman at UC Santa Cruz studying game design, the first in her family to attend a UC.

“I am not at all surprised that Miss Alma is National Counselor of the Year,” Sicairos said. “That title is accurate.”

The pandemic has brought a new set of challenges to Lopez. At least nine students in Livingston Middle School lost their primary caregiver to Covid, she said, and countless others lost grandparents or other loved ones, or had their lives disrupted by economic uncertainty.

A suicide-prevention survey Lopez conducted in September found that a fourth of the middle school — roughly 200 students — said they needed help and wanted to talk to a counselor. Lopez and her counseling team have met individually with all 200 students and either referred them to therapists in the community or addressed students’ needs directly.

Still, Lopez remains energized about her job. She’s back to leading college tours, getting to know new families and often drops off students who need rides home from school. She’s even learning Punjabi, to better communicate with families from South Asia.

“I love that no two days are the same. Half the time I don’t even feel like it’s work,” she said. “Even when it’s hard, I feel privileged to help young people become good human beings.”