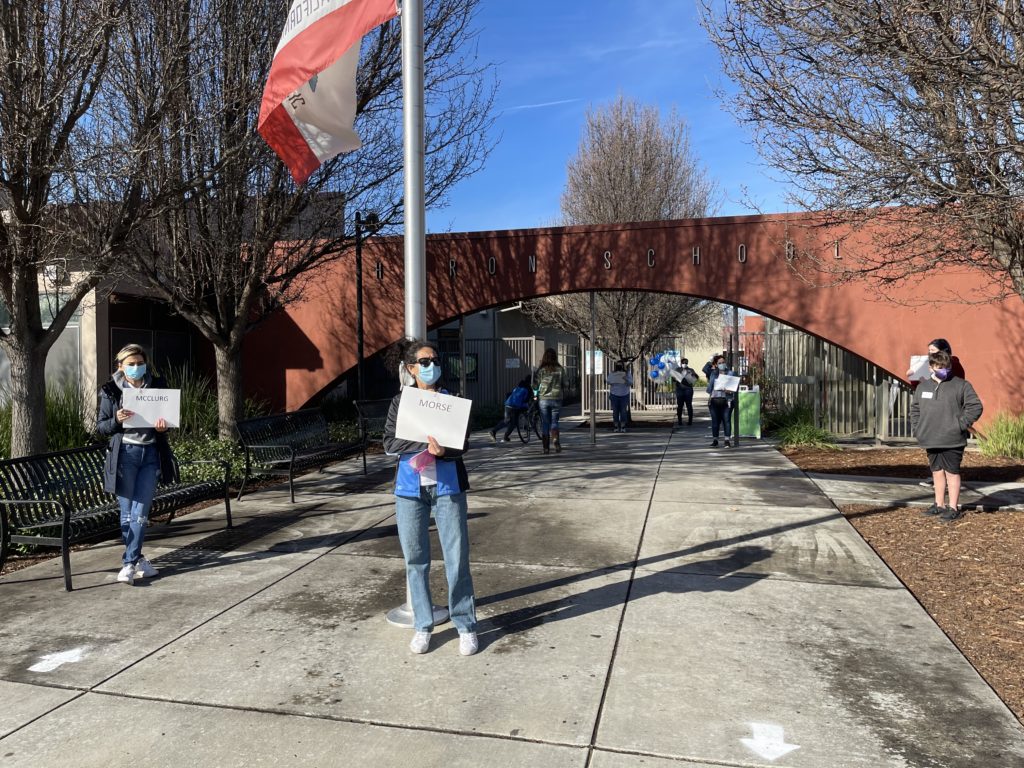 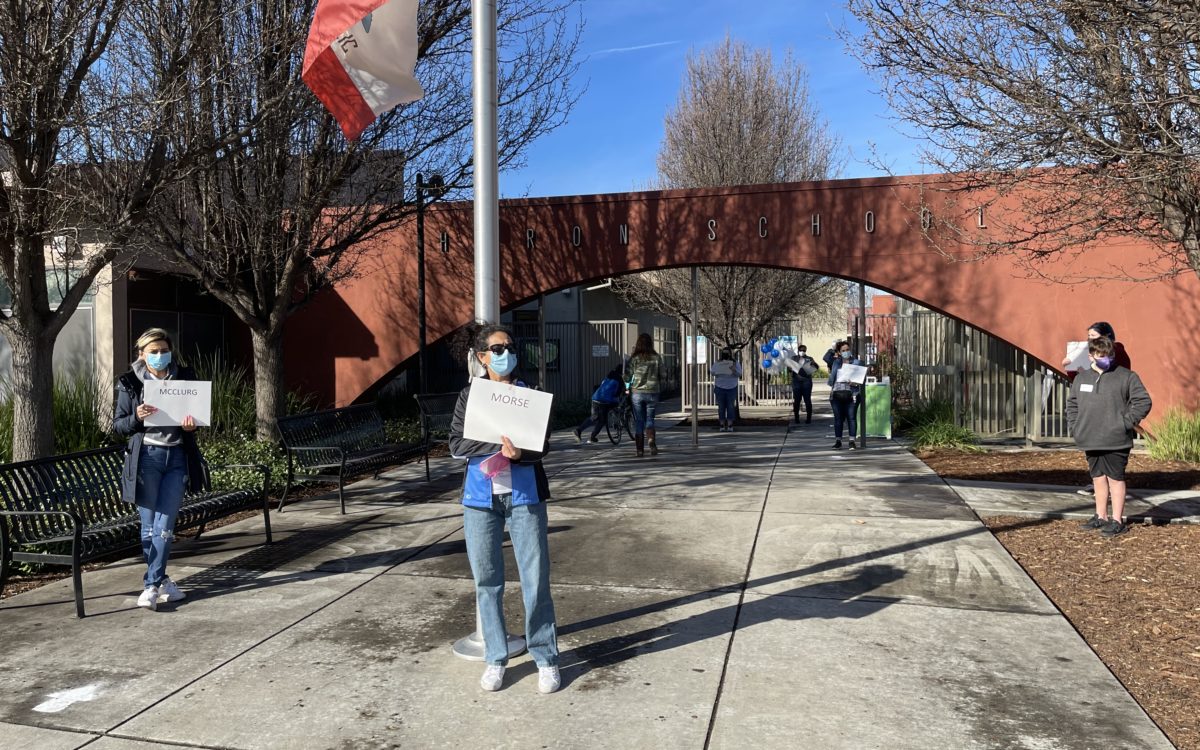 Brandy Tuzon Boyd/Natomas Buzz
Natomas Unified School District classified staff and substitute teachers preparing to give Cohort A a one-hour orientation tour that covered safety practices including classrooms, use of the bathrooms, water fountains and how to navigate to the office.

Brandy Tuzon Boyd/Natomas Buzz
Natomas Unified School District classified staff and substitute teachers preparing to give Cohort A a one-hour orientation tour that covered safety practices including classrooms, use of the bathrooms, water fountains and how to navigate to the office.

Some California teachers and school staff are receiving bonuses, salary increases and stipends as part of union agreements with school district officials eager to reopen classrooms.

Recently signed school district agreements with teachers unions include everything from retroactive pay raises and a bonus in Long Beach to bonuses as high as $5,000 for a course in Campbell Union High School District in San Jose and one-time 7% salary increases in April for teachers who voluntarily return to campuses in Sweetwater Union High School District in Chula Vista.

Under the terms of Assembly and Senate Bill 86, schools can earn a share of $2 billion in state incentive money if they reopened for in-person instruction by April 1. The first students returning are those with extra needs, the youngest students and one grade of middle or high school. For those districts that did not open on April 1, the amount of incentive funding is reduced by 1% a day through May 15.

Some school districts are planning to use state incentive money for the pay increases while others are taking the money from their general fund, federal funds or other sources.

Gov. Gavin Newsom first proposed offering incentive funds to districts to reopen schools in December. While some school districts had already signed off on agreements offering pay increases to their staff before the proposal, many more signed off on memorandums of understanding or side agreements to contracts to include pay raises for staff in the months since.

An agreement between the Sweetwater Union High School District and its teachers union, for example, ties temporary pay increases to the state funding incentive. The 7% increase for April was offered after district officials realized they wouldn’t have enough teachers willing to voluntarily report to campuses to reopen the classes required to get a share of the state funds, according to the agreement. Teachers who return to school campuses on May 3 will receive a 2% salary increase in May and June.

Natomas Unified School District in Sacramento agreed to give teachers a raise and stipend after the Natomas Teachers Association filed an unfair labor charge in March because the school district announced it planned to bring elementary school students back to campus five days a week on April 12. The union contended that district officials should have negotiated the plan with it and that the decision violated prior reopening agreements.

After two days of negotiations, both parties agreed to return students to school five days a week and to give teachers a 1% ongoing raise for the 2021-22 school year, a $1,000 stipend for teaching students in class and in distance learning concurrently, $250 for instructional materials and extra pay to offer office hours to students outside of school hours.

“We offered the $1,000 stipend in recognition that concurrent teaching is another juggling act,” Superintendent Chris Evans said.

In Long Beach Unified, where elementary students returned to campuses April 1, teachers are expected to receive retroactive pay raises of 1% for last school year and 2% for this school year, as well as a one-time bonus equal to 2% of each teacher’s salary, if a tentative agreement is approved by the school board on April 28. The increases were part of an agreement signed March 25 by district and union officials. The district serves 70,000 students.

“Although the proposed salary increase is not specifically tied to Covid-19, we acknowledge the context of the past year,” said Chris Eftychiou, public information director at Long Beach Unified. “Given the difficulties that our employees have endured during our nation’s worst pandemic in a century, a priority for our district leadership was to offer a meaningful increase in compensation, based on a reasonable assessment of our budget.”

That sentiment is repeated often in the reopening agreements between unions and school districts across California.

Oakland Unified agreed to pay all teachers, staff and administrators who worked in-person to help reopen campuses a $2,000 stipend. Teachers who voluntarily reported to a campus by March 30 earned an additional $200 a week in April.

Specific staff members, such as physical therapists, interpreters, instructional assistants, library technicians and others who have direct contact with children, as well as employees who offer safety training to other staff members, also earned a 5% pay raise during April and May.

The district reopened to the district’s youngest students on March 30, with third through fifth graders returning April 19.

“To the extent districts see the efficacy of providing salary enhancements for teachers in the wake of one of the most difficult school years in U.S. history, we support that effort,” said union President Keith Brown. “Indeed, no additional funds can compensate our members for the amazing achievement of creating and sustaining a working education delivery model during this pandemic. In many cases, the stipends fall short of additional expenses taken on by teachers in order to teach from their homes.”

In nearby San Jose, Campbell Union High School District and the Campbell High School Teachers Association agreed to a menu of stipends that pay up to $5,000 for a course. Stipends start at $2,500 per course, for teachers who are offering instruction concurrently to students at home and in the class, as well as to teachers who split those duties with another teacher. Teachers receive the stipends for each course they teach no matter how many sections of it they offer.

The wave of pay raises is the normal “ratchet-up effect” you see in government, said Jon Coupal, the president of the Howard Jarvis Taxpayers Association. “Look at what that district is doing. We have to do it too. The ratchet-up effect for pay and benefits is endemic in the public sector.”

Coupal said he’s been getting a lot of calls from taxpayers about the bonuses. “I’ll be honest. I think some of the demands by the labor leaders are justifiably perceived as extortion by the taxpayers, and they aren’t happy,” Coupal said.

Some districts are pushing back on requests for more money from staff.

The district had declared an impasse on April 5 after a month of negotiations. Two of the sticking points were the union’s request for stipends and temporary pay raises for its members, as well as for child care centers staffed by union members.

The new agreement signed April 19 includes a $1,000 prorated stipend for union members who have been working on school sites since last summer, a $750 stipend for professional development and preparation, a $100 reimbursement for expenses incurred while working remotely, and a $1,250 stipend for Covid-19-related expenses and additional work related to returning to campuses, according to the agreement. The district also will allow union members to enroll their children in the schools where they work if space is available.

Fremont Unified won’t be returning to in-person instruction this school year after the school district and its teachers union failed to agree on terms that include increased pay. It also will lose out on the state funding attached to reopening this school year.

A review of proposals from both parties shows they differ on which grade levels should return to campus, school schedules and compensation. The union requested a $2,100 stipend for teachers to provide hybrid instruction. The district said no to the stipend, but offered a one-time bonus of 1 percent of each teacher’s salary and extra pay to set up classrooms if all grade levels were open for in-person instruction by April 19.

The two parties did not reach an agreement on returning to campuses this school year and have moved on to negotiations about summer school.

Jonathan Zachreson, a parent and finance manager in Roseville, in Placer County, has been a vocal supporter of fully reopening schools and a critic of the recent spate of pay increases. He started the statewide parents group Reopen California Schools in July.

In recent months he has been using social media to criticize teacher bonuses and pay raises in California. The posts have drawn the attention of national and international media, who have interviewed Zachreson several times in the last few months on the topic. His Reopen California Schools Facebook page has 14,300 followers, and his Twitter account has 3,000 followers.

Parents don’t have a problem with paying teachers a few hundred or a few thousand dollars if they return to school for full-time instruction, Zachreson said. They are opposed to giving the money to teachers who aren’t on campus full time, he said.

“Teachers unions have used this opportunity to seek more pay and benefits,” he said.