A long-awaited state audit of Calbright College, California’s exclusively online community college, criticized its previous leaders for overpaying some of its executives, lacking a strategy for spending state funds and failing to provide students with training and connections to employers.

In its two years of operation, Calbright has failed at its key mission of “enrolling adult students who cannot otherwise obtain postsecondary education,” concludes Elaine M. Howle, the California state auditor, in a report released Tuesday.

If Calbright doesn’t change by the end of 2022, Howle recommends that “the Legislature eliminate the college as an independent entity and explore other options for providing self-paced educational programs to California adults.”

The state Assembly last week voted unanimously to defund and shut down the college. It’s unclear whether Calbright can convince the Legislature to give it more time.

The Joint Committee on Legislative Audit required the state audit of the college’s finances and performance after the Legislature last year cut its one-time state funding to $60 million and ongoing annual dollars to $15 million for failing to enlist students. The college initially received $100 million in state funds over seven years for startup costs and about $20 million annually for operating expenses.

Calbright enrolled just 497 active students as of the end of March with only 41 certificates awarded since its opening in October 2019, according to the college. Administrators say they purposely limited enrollment to 500 people because the college is new and in “pilot” mode. But a total of 904 people have enrolled in Calbright at one point, or another, according to the audit. Of which 384 students dropped out, 87 were inactive for at least 90 days and only 12 students received a certificate in the first year.

Some faculty groups argued the millions of dollars Calbright received would have been better used going to the state’s 115 traditional community colleges that serve nearly 2.1 million people.

In response to the audit, Pamela Haynes, president of Calbright’s board, said the college is committed to transparency and accountability and welcomed the auditor’s review.

“We acknowledge that Calbright made early missteps and that necessary changes have been made to course-correct and implement rigorous internal controls where needed,” Haynes said. “Lastly, we appreciate the recommendations for continued improvement, and we are fully committed to and confident in Calbright’s ability to accomplish these along the given timeline.”

Heather Hiles, the college’s former and first president, abruptly resigned in January 2020, less than one year into a four-year contract. Calbright’s board of trustees unanimously accepted her resignation.

“It is easy to blame the founding CEO for everything,” she said. Under her leadership, Hiles said her executive team identified the school’s training programs and enrolled the first 45 students the day Calbright opened. Hiles blamed the college’s new president  and the board for abandoning the business plan she created to hire graduates and the unions for committing to “killing (Calbright) at all costs.”

“We’ve got to find a way that unions won’t fight people getting access to training and opportunity,” she said. “It’s such a shame that as soon as we built Calbright, it was dismantled.”

Ajita Talwalker Menon, a former higher education adviser in the Obama administration, was recruited by the board in February 2020 to improve the new college. She was permanently hired in July 2020.

According to the audit, Calbright’s problems can be attributed to “its former executive team’s poor management” setting up the college.

The audit found no detailed strategy for spending the more than $175 million that Calbright expects to receive in state funding and that the previous executive team headed by Hiles failed to follow sound hiring practices by paying four of its six executives, including the president, salaries higher than others in comparable jobs. Hiles was paid $398,000, $46,000 more than the next-highest community college executive salary in the state. When Hiles was hired in 2019, some faculty members criticized her salary because it topped that of the college system chancellor’s, which was $311,928, although there are other campus and district leaders across the state who also make more than the chancellor. (Menon was hired with a salary of $285,000.) 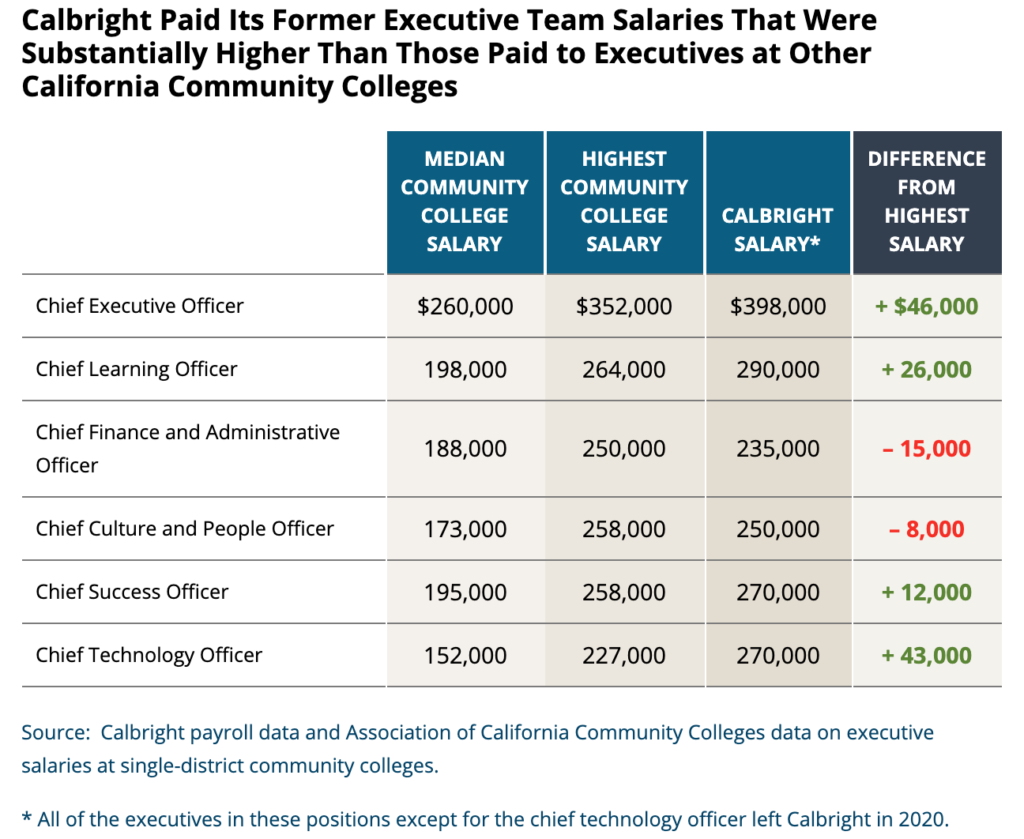 The audit also cited Calbright for lacking a detailed plan for how or when they will spend the more than $175 million in state funding it expects to receive through June 2025. The college also has a contract with the Foundation for California Community Colleges to assist with administrative functions like payroll and accounting, but Calbright hasn’t clearly defined the work that it expects the foundation to perform, and it doesn’t have a transition plan to manage its operations. Yet, the college has paid the foundation more than $4 million to date.

The audit also criticized hiring at the college by the former administration. Nine of 14 hiring decisions made in 2019 were “problematic because Calbright either did not conduct competitive hiring processes or gave preferential treatment to certain candidates.” The audit noted that some job candidates received their contracts because of a “past personal or professional connection” to someone on the college’s executive team. These candidates lacked public education experience or experience working in the public sector, which hindered the college’s success. Most of that administrative staff left the college in 2020 after Hiles resigned.

The former Calbright leadership also delayed creating a student support system, and the college failed to develop a process for helping students obtain well-paying jobs. Students have either dropped out or stopped progressing through the college’s programs, auditors found. Although new Calbright leaders have made recent improvements, they haven’t developed a “clear and robust strategy,” according to the audit.

The Legislature initially gave the college a seven-year startup time, but legislators’ patience may be running thin.

On Tuesday, Assemblyman Jose Medina, a Riverside Democrat who with Assemblyman Evan Low co-sponsored the bill that would eliminate Calbright by the end of 2022-23, said the audit findings only further his resolve that the Legislature “end the Calbright College experiment.”

“Although I believe that the original intent and mission of Calbright is noble, it has struggled with numerous issues since its inception that we can no longer ignore,” said Medina following last week’s Assembly vote.

“The other California community colleges have demonstrated their ability to adapt, expand and serve their 2.1 million students even in a pandemic,” he said. “Having graduated so few students while taking away resources from other programs in the California Community Colleges is simply not helping our students.”

Former Gov. Jerry Brown championed Calbright as an affordable, self-paced alternative to traditional colleges intended to serve adults between the ages of 25 and 34 who lacked college degrees or wanted to earn higher-paying jobs. The free college offers a competency-based education model, which assesses students based on the skills they learn and not the amount of time spent in a class.

The audit found that Calbright failed to establish some of its educational programs. For example, Calbright offers a cybersecurity program despite “most jobs” in that field requiring at least a bachelor’s degree.

The audit did acknowledge that Calbright, under new leadership by President Menon, has made improvements and is correcting some of the college’s problems.

But “Calbright has yet to develop a clear and robust strategy for how it will accomplish its mission,” according to the auditor. “Calbright must make immediate, substantial progress in accomplishing the setup of the college and in enrolling, graduating and securing jobs of the California adults it is intended to serve.”

Some faculty groups had long criticized Calbright, even before it opened its doors to students, as a waste of money and resources that could have gone to the other 115 traditional community colleges.

“We are unsurprised by the critical findings,” said Evan Hawkins, executive director of the Faculty Association of California Community Colleges. “Calbright is inherently flawed, and no amount of time can fix its inability to effectively serve students. As our 115 accredited colleges have stepped up to serve nearly all students online, the audit shows Calbright continues to serve a small number of students who are not supported enough to become successful in their goals. Simply put, Calbright is falling far short of its promise.” 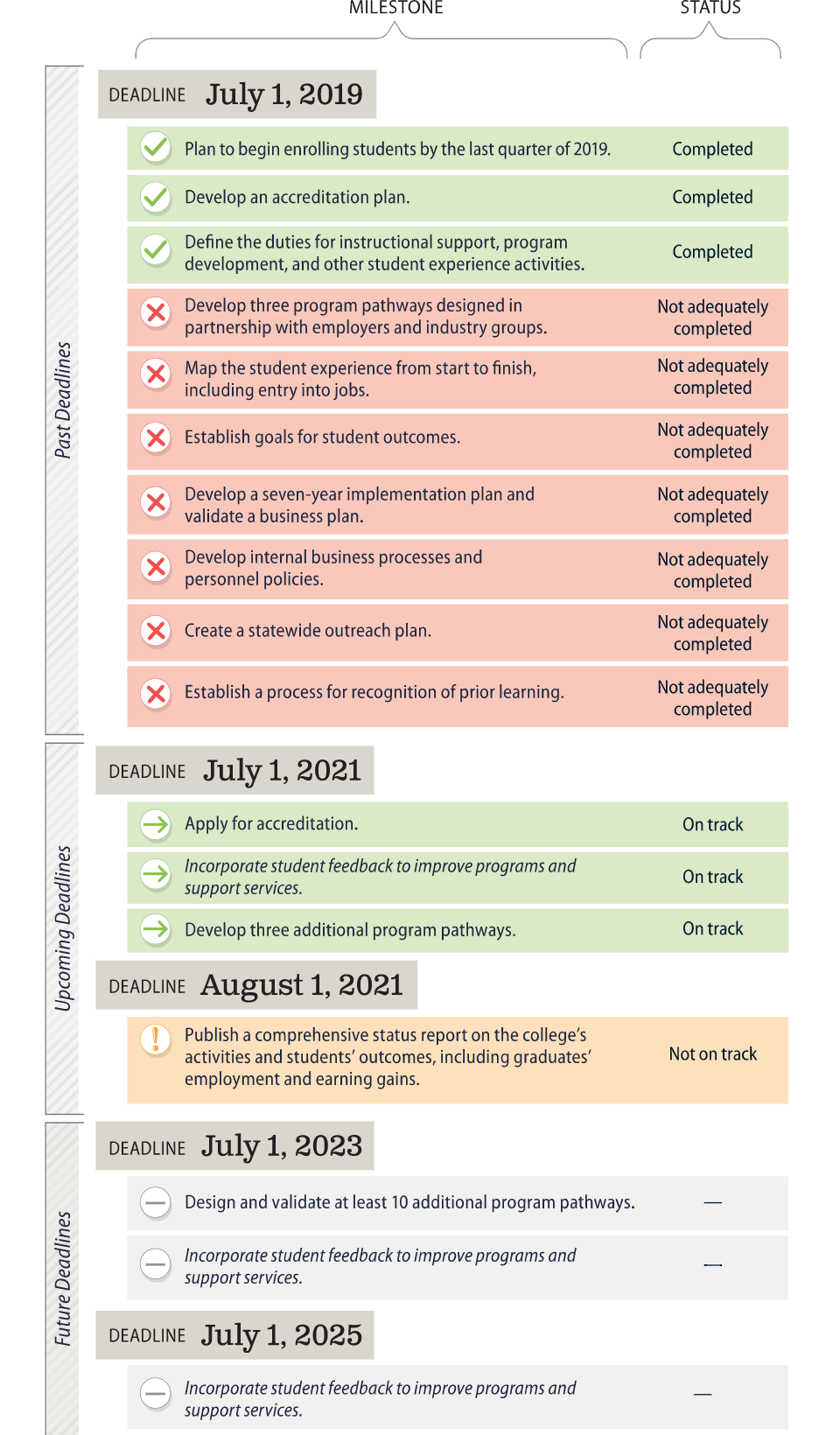 Hawkins said the faculty group would continue to advocate for eliminating the college through the Legislature.

But the audit may have put to rest one point of contention between the faculty groups and the college — that Calbright is simply duplicating programs offered at the other institutions.

Other community colleges, for example, offer statewide, fully online versions of medical coding, information technology and cybersecurity. Still, none of them are self-paced or fully address the barriers that prevent students from attending college. “Calbright’s pathways are not duplicative,” according to the audit.

Board President Haynes and Menon wrote that they agree with the recommendations. And a strategic plan, released in March, will be used to develop strategies, goals and timelines for the college. That plan includes debuting three new programs this year to increase enrollment to 5,000 students by the end of 2023.

“Calbright is committed to the students we serve and to our mission to increase economic opportunity for Californians in need of flexible, skills-based training programs,” Haynes said. “This work has never been more important or urgent, and we will continue to keep our focus on serving our target population as we strive to build a more equitable economic recovery.”