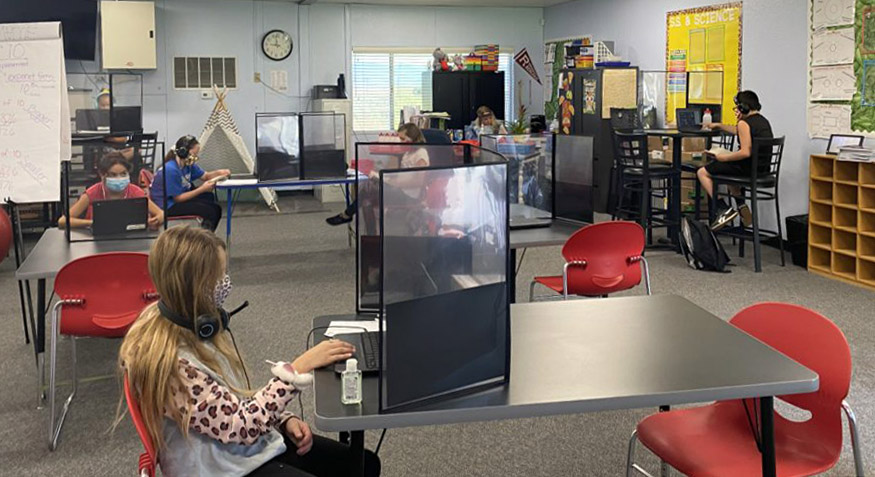 California education officials have been told verbally that the state may not need to submit a waiver application to the U.S. Department of Education, thus opening the door for more flexibility this spring when it comes to standardized testing, as school districts continue to navigate reopening plans during the pandemic.

As vaccinations have ramped up and cases of Covid-19 have declined across the state, many California schools have started bringing back groups of students for in-person instruction. One part of the reopening puzzle recently has been how and when to administer statewide standardized tests, which in February the U.S. Department of Education said would be required.

Last spring, federal and state education officials removed the requirement that states had to test all students in their academic standards using statewide assessments like the Smarter Balanced tests in math and English language arts. But no such waiver was offered in 2021.

In lieu of a blanket waiver, the U.S. Department of Education this year said that states could apply for other ways to potentially ease the burden of testing this school year.

On April 2, State Board of Education President Linda Darling Hammond and State Superintendent of Public Instruction Tony Thurmond sent a letter to Ian Rosenblum, the deputy assistant secretary handling this matter, asking for written confirmation of conversations that California would not need a general waiver for it to proceed with its academic testing plan. Ultimately, U.S. Education Secretary Miguel Cardona would have to approve the decision.

Also on Friday, State Board of Education officials briefed state legislative aides and others in the education community about the likelihood of districts being able to use alternative assessments this year.

California’s plan would still offer the state’s Smarter Balanced assessments in mathematics and English language arts, the California Science Test, as well as tests for English learners and other special populations.

But in situations where it is not viable for districts to administer those assessments due to challenges such as assuring Covid-19 safety or broadband limitations while students are at home, the policy would also permit school districts to select their own assessments if they met a set of criteria prescribed by the state.

These assessments would have to be aligned with Common Core state standards; be available to assess students in grades 3-8 and 11; be uniformly administered across a grade span, school or district; and provide disaggregated results for parents, educators and the public.

It is not yet clear whether alternatives to the science test would be permitted.

California has already submitted a waiver request for other flexibilities, such as extending the timeline for all tests until July 30 and removing the consequences of having less than 95% participation, to the U.S. Department of Education for approval, according to Linda Darling-Hammond, president of the State Board of Education. Because those flexibilities along these lines were suggested by the federal officials in guidance issued on February 22, and have been agreed to in conversations with them, it is likely that the state will receive approval, state officials said.

Some states, including New York, requested blanket waivers to remove any obligation for standardized testing, but the Biden administration has said no to that.

In March, California’s State Board of Education approved its plan to seek a waiver that would allow districts to choose a diagnostic, benchmark or other interim assessment where it is not viable to administer the state summative assessments and laid out its criteria for alternatives.

The California State Board of Education did not submit a general waiver with the local assessment options because it was told by Secretary Cardona’s office that it would not be necessary given the state still has plans to offer the statewide Smarter Balanced assessments, according to Brooks Allen, executive director of the State Board of Education.

In the meantime, many districts have moved ahead with their own plans for assessing students.

As of March 17, nearly 14,000 English language arts and 8,000 mathematics Smarter Balanced assessments were underway. In addition, 11,000 California Science Tests are underway and 9,200 are completed, according to Mao Vang, director for the Assessment Development and Administration Division at the California Department of Education.

Fresno Unified School District in the Central Valley moved forward with plans to use the Smarter Balanced tests, but keeping its local assessment choice, i-Ready, as a top choice if the Smarter Balanced test isn’t a viable option for the district. The district has already been using i-Ready assessments throughout the pandemic to check in on students and provide academic feedback to parents.

There, administrators were preparing for both the Smarter Balanced test and i-Ready, and Scherrer said they would prefer to use i-Ready because the district has already grown familiar with it in a distance learning setting.

“When Covid hit and we had to close, i-Ready was already in our system, and we were able to pivot to use those diagnostics. That’s been really helpful having a constant temperature check on where students are in both ELA and mathematics,” said Andrew Scherrer, executive director of equity and access at Fresno Unified.

Other districts, including West Contra Costa Unified in the East Bay Area, have been reluctant to move forward with any testing plans while the waiver was still in limbo and cases of Covid-19 in some local communities remained high. Many districts struggled to nail down a plan for assessing students who could be either learning from home or in person.

“Right now we are just focused on the ELPAC (English Language Proficiency Assessments for California), and that is landing with mixed reviews,” Rubén Aurelio, chief academic officer for West Contra Costa Unified, said in early March referring to California’s English language proficiency test for English learners. “We question the validity of the assessments in this environment of course, but we are doing it.”

California school districts won’t be limited to a specific set of tests to choose from, but selected assessments must meet a set of criteria, including being aligned to the state’s academic standards. Results would also have to be made public, regardless of the tests that are used.

About 77% of school districts said they used one of five local assessments during the 2020-21 school year already, according to a survey conducted in March by the California Department of Education, which reached 969 districts. Those include Star Assessments by Renaissance, i-Ready by Curriculum Associates, Measures of Academic Progress by NWEA, FastBridge by Illuminate Education and Reading Inventory by Houghton Mifflin Harcourt.

While many parents, researchers and education advocacy groups have applauded the U.S. Department of Education’s decision to require standardized testing this year, other groups such as the California Teachers Association have pushed back. Many have raised concerns about the validity of data collected after a traumatizing year, and while many students remain in a mix of reopening scenarios.

Allen said he shares concerns that the data could be a misrepresentation if districts use different assessments or participation rate is lower, but overall he was pleased that the state may not require a waiver. But so far, the state has not been asked to provide a measure of comparability between districts, he said.

“When we look at all of this we want to make sure we have meaningful information, valid and reliable information about where students are,” Allen said. “The path that’s been carved forward provides the opportunity to do that.”