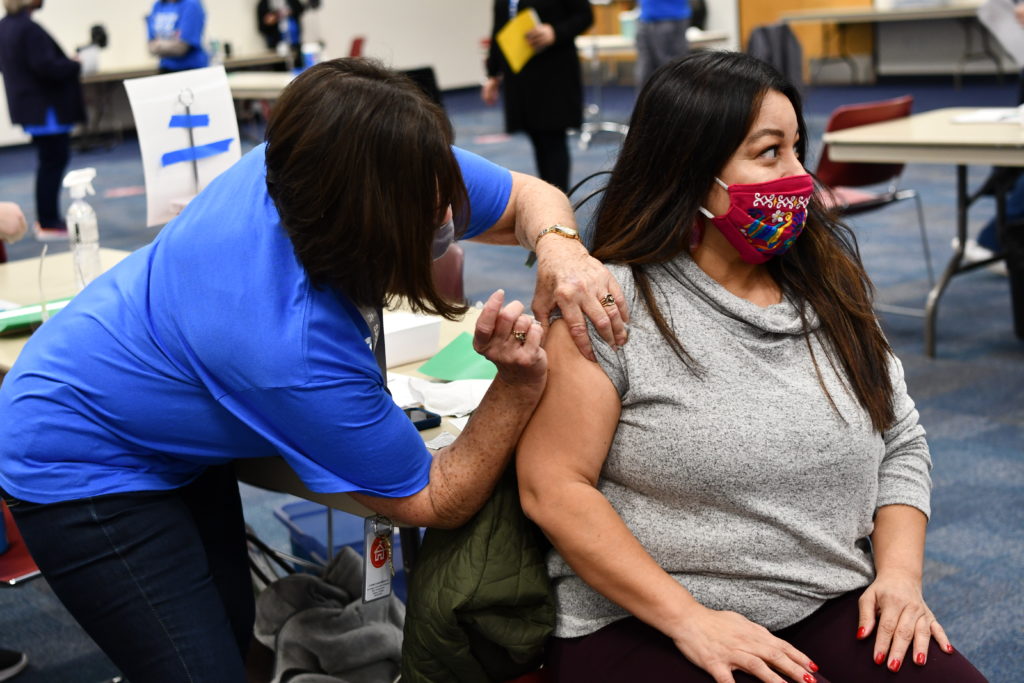 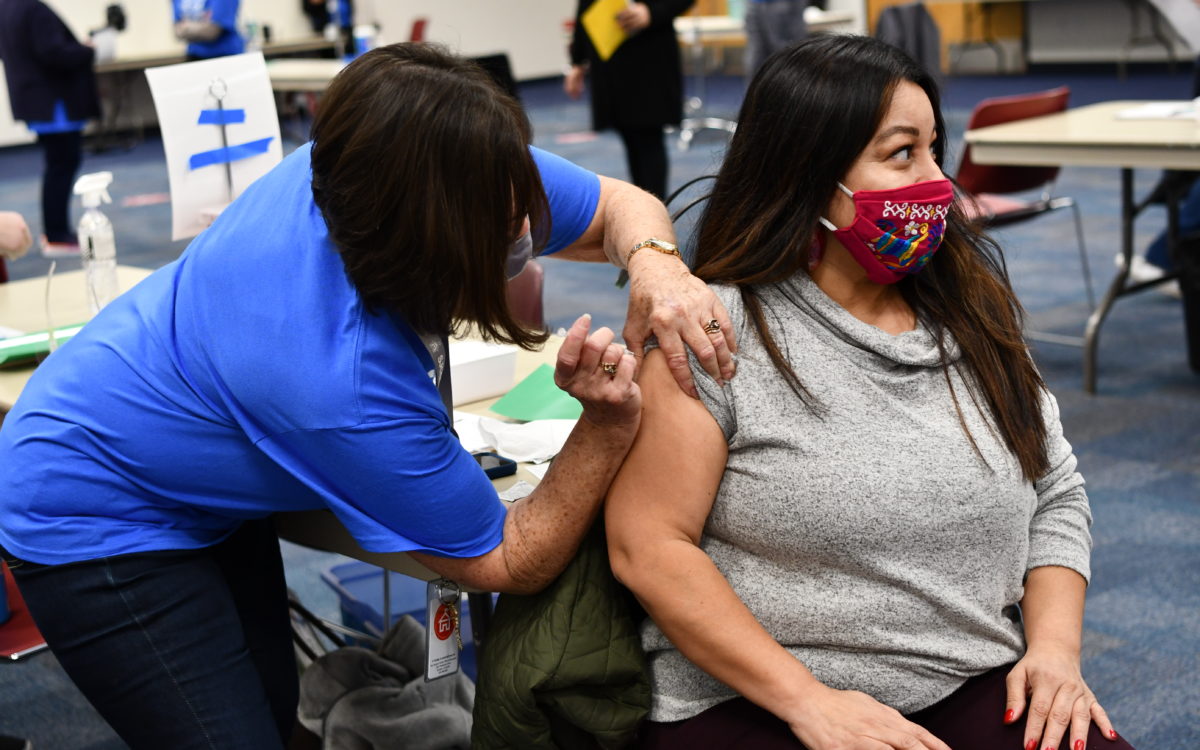 Courtesy of the San Joaquin County Office of Education

Courtesy of the San Joaquin County Office of Education

Some California school districts, in an effort to get ahead of California Covid-19 vaccine mandate deadlines and reduce already dire staffing shortages, are paying teachers and other staff to get their Covid-19 vaccinations.

Enterprise Elementary School District in Shasta County is one of the latest to offer vaccine incentives to school staff. In August, district officials agreed to pay $500 to each employee who was fully vaccinated against Covid by Oct. 4 – 11 days before a state deadline for school staff to be vaccinated or begin weekly testing.

The district, which had 40% of its staff vaccinated at the beginning of the school year, now has 62% vaccinated — including 70% of its teachers. All vaccinated employees received the benefit, even those vaccinated before the incentive program began.

Although there is no way to know if all 283 staffers who received the incentive decided to get vaccinated because of it, Superintendent Heather Armelino said that some members of the school staff told her that it encouraged them sooner than they had planned.

“Our goal has been to stay open and in person and, despite a surge at the beginning of the school year, we have been able to do that,” Armelino said. “That was certainly better than a year ago, when that wasn’t always the case.”

Although only a handful of districts in California have offered cash incentives to staff who vaccinate, the practice is popular in other states where Covid infection rates are higher and vaccination rates are lower. In Mississippi, several school districts are offering cash to staff who vaccinate, including incentives of up to $1,000 per employee in the Pascagoula-Gautier and Vicksburg -Warren school districts.

In California, vaccine incentives for K-12 school staff also seem to be more popular in places with high Covid community transmission rates and low vaccination rates. As of Wednesday, just 52.3% of Shasta County residents 12 and older were fully vaccinated. The state vaccination rate for that age group is 79.8%.

Enterprise Elementary School District officials are hopeful their vaccine incentive will reduce the amount of staff time spent on Covid testing and keep teachers in classrooms instead of at home in quarantine, Armelino said. A shortage of substitutes has made it difficult for the district to find replacements for teachers when they are sick or quarantined.

“I would say it is the norm to have uncovered classrooms every day, so we often have administrators covering them, or coaches and other specialists who step in,” she said.

Some school districts, community colleges and universities also have offered students incentives to get the Covid-19 vaccination. San Francisco State University, for example, held a drawing for vaccinated San Francisco Unified students. The prize: a full scholarship to the university. Los Angeles Unified also has set aside $5 million for raffle prizes for students that include everything from gift cards to tickets to Disneyland.

It’s possible vaccine incentives for both staff and students could become more common in California next year as districts prepare for a new state vaccine mandate announced last month by Gov. Gavin Newsom. Under the new mandate, all public and private school students and employees must be vaccinated by July to be on campuses. They will no longer be able to be tested as an alternative to a vaccine unless they are eligible for medical or personal belief exemptions.

Like many rural California district officials, Armelino is waiting to see if state legislators pass a bill that would eliminate personal belief exemptions for the required vaccination — a move she fears would put Enterprise Elementary School District in a precarious staffing position.

“We have heard from both employees and families who say they will not return if the vaccine is required,” Armelino said. “We recently surveyed our families. Of those who responded, 70% said they do not plan to vaccinate their children, and 80% said that the personal belief was important to them.”

State legislators have indicated they are considering legislation to strengthen the Covid vaccine requirement, which could include eliminating some exemptions or outlining how families must obtain exemptions.

The program in Porterville, which began July 1, offered $500 to every teacher and staff member who was fully vaccinated by Oct. 16. If staff members aren’t vaccinated or willing to take a weekly test, they are sent home without pay, according to a memorandum of understanding between the district and its teachers union.

Tulare County has high Covid transmission rates and 57.4% of its residents 12 and older were vaccinated as of Nov. 18.

Porterville district spokesman Jason Pommier said that the district’s vaccination incentive “numbers have been pretty good.” The district did not offer additional information about the incentive program.

“There were times we were struggling with staffing,” he said. “Obviously, one student testing positive in a classroom would put the whole classroom out and put the teacher out.”

San Joaquin County has high community transmission rates. On Nov. 18, 66.3% of its residents 12 and older were vaccinated.

After negotiating with their unions, the district offered each member of the school staff $350 once they were fully vaccinated. The district gave employees until June 30 to get their vaccinations if they wanted to be eligible for the money. Employees who began working this school year were offered $200 to get the shot.

The district, which serves 25,000 students from transitional kindergarten to adult education, had about 68% of its staff vaccinated when the program began. Now 77% of its 3,000-member staff have been vaccinated, including 81% of its teachers.

District leaders don’t attribute the increase entirely to the incentives, saying more district staff signed up for vaccinations after each wave of Covid hit the community.

“Obviously the stipend itself wasn’t significant enough to push those who still had concerns over the edge, but it did allow us to acknowledge people,” Superintendent Clark Burke said.

Burke isn’t certain if the district will offer another round of incentives, although officials there will continue to encourage their staff to vaccinate to keep down infection rates and keep students in school.

“We have to keep our focus on the students and what we are here to do,” Burke said. “We are tasked with the responsibility of educating kids, and that’s our primary focus. Keeping them safe and housing them is all a means, so we can provide a top-quality education, and that needs to be the forefront of the decision-making when it comes to public education.”