California bilingual programs ready to grow after slowing during pandemic 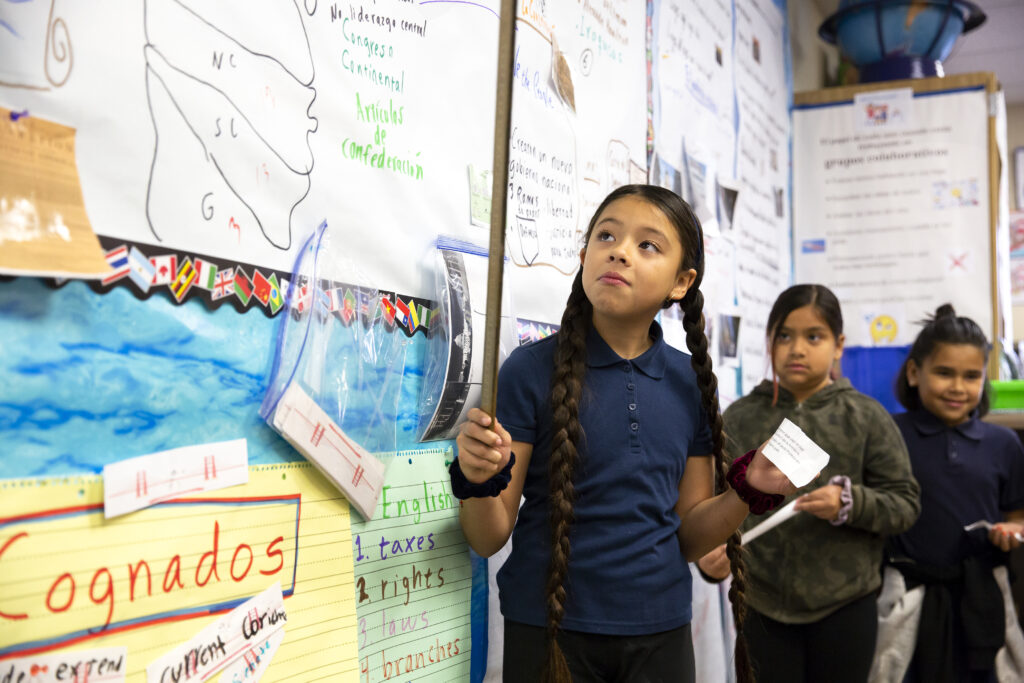 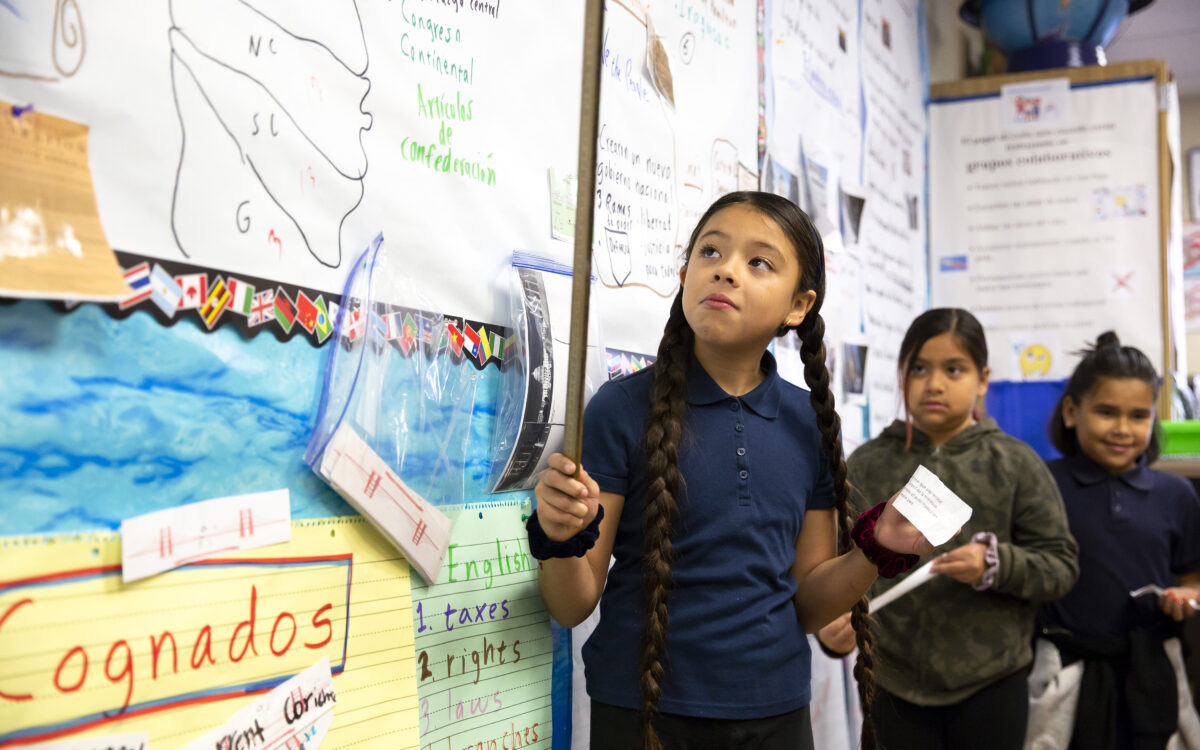 Under the California Department of Education’s Global California 2030 Initiative, the state now has a goal of enrolling half of all K-12 students in “programs that lead to proficiency in two or more languages” by 2030. The initiative aims to have 3 out of 4 students proficient in two or more languages by 2040. Studies have shown that dual immersion programs, which teach children both English and another language simultaneously, can improve long-term academic achievement for both English learners and native English speakers.

As school districts have dealt with the impact of the Covid-19 pandemic, many were forced to pause their expansion plans for new dual language immersion programs.

That was the case for the Newark Unified School District. The Bay Area district was all set to start its first-ever Spanish-English bilingual immersion program in fall 2020. In March 2020, staff at Schilling Elementary, where the program would be located, were in the midst of enrolling kindergartners and 1st graders when the pandemic hit.

Then some parents began to lose their jobs and face eviction. With the challenges of helping support families and developing a distance learning plan, the district decided to postpone the opening.

“I was heartbroken, disappointed, felt defeated, just a string of emotions that we usually go through when something you’ve worked so hard on is not able to happen when you know it has so many benefits for your kids,” said principal Wendy Castañeda-Leal. “Those 1st graders that were accepted, they’re moving on to 2nd grade. So they lost the opportunity to be successful in this program because of the pandemic.”

Often, when school districts launch programs for the first time, they only offer kindergarten and 1st grade, and then expand the program every year as those students move on to the higher grades.

Other districts across the state that had to postpone their plans for expanding bilingual programs include Los Angeles Unified. The district postponed the launch of a new Filipino dual immersion program and put planning on hold for additional programs in other languages.

“I believe Covid-19 has impacted just about everything” regarding bilingual education in schools, said Lydia Acosta Stephens, executive director of Los Angeles Unified’s Multilingual and Multicultural Education Department. The priority over the past year has been to address families’ basic needs, such as food and mental health, she said.

Now, though, school officials and advocates say most districts are pushing forward with their plans for bilingual programs.

“I know of several districts that have looked to expand,” said Jan Gustafson-Corea, CEO of the California Association for Bilingual Education, a nonprofit organization that promotes bilingual education and offers training and support for districts and teachers. “We just got a call from a school district to help them find Chinese teachers.”

There has been a growth of bilingual programs since California voters passed Proposition 58, in 2016, removing the limitations on bilingual education that had been in place since 1998. According to numbers compiled by the California Association for Bilingual Education, there were 229 dual-immersion schools in California in 2010-11, increasing to 407 in 2016-17.

According to the California Basic Educational Data System, 1,490 schools reported having some kind of bilingual or multilingual program in 2018-19, including 747 dual-language immersion programs.

The vast majority of schools offered programs in Spanish, followed by Mandarin, French, Cantonese and Korean, but many other languages are also offered, including Arabic, Armenian, Filipino, Hebrew and Hmong, among others. The California Department of Education is working on collecting language program data through the California Longitudinal Pupil Achievement Data System, which could offer more information about how many students are enrolled in these programs, but this data is not yet available.

As the state’s largest school district, 102 languages other than English are spoken across all L.A. Unified campuses. The district offers dual-language immersion programs in six languages: Spanish, Korean, Mandarin, French, Arabic and Armenian.

This fall, the district’s first dual immersion program in a seventh language, Japanese, will open at Amestoy Elementary School in Gardena, located in the county’s South Bay region. And, though a specific timeline has yet to be finalized, the goal is to also launch the Filipino dual immersion program postponed by the pandemic.

Proponents of dual immersion programs say they are especially important now because they value and build on the language skills so many students use at home other than English. This year, many students may have had more opportunities to strengthen their knowledge of their family’s native language while studying from home.

“There have been folks in districts who have been hoping for this for many, many years, and they have a deep commitment in their community,” said Anya Hurwitz, executive director of Sobrato Early Academic Language, or SEAL, a nonprofit organization that provides training and assistance to help elementary schools and preschools across the state implement strong bilingual programs.

She said despite setbacks, districts like Newark Unified, that had to postpone the opening of its new bilingual immersion program because of the pandemic, have remained committed and used the year the program was postponed to strengthen plans and build support.

“Newark’s a great story of a district that is trying to keep the train moving but has had to rethink things due to the pandemic,” she said.

After months of distance learning, the school board finally agreed to open the dual immersion program in Newark in fall 2021. At the board meeting in February, when the program was finally approved, there were tears. For some, it was bittersweet.

“I had to cross the freeway two years ago in order for my kids to get into [a bilingual] program,” said mother Adriana Lopez in her speech to the board. She said she knows many other families who live in Newark but sent their children to neighboring Fremont Unified so they could have a bilingual education.

“The approval just made me feel like a weight was lifted off my shoulders, and they were heading in the right direction for our students,” said principal Castañeda-Leal.

The new Spanish-English immersion program at Schilling Elementary is already almost fully enrolled for the fall, with only five seats left as of mid-May. Patricia Saldívar’s youngest son is one of the students who will start kindergarten in the new dual immersion program at the school.

At the board meeting where the program was approved, she spoke to the board, saying she has seen firsthand how bilingual immersion programs help children. Her older son, who is 16, went to a dual immersion school in Fremont and is fully bilingual. Her younger daughter, who is in junior high, took only English language classes and understands Spanish but cannot read or write it.

“It’s important that the schools support us for our children to learn to read and write their native language that we brought from our countries,” Saldívar said in Spanish. “I have seen that my nephews and nieces go to Mexico to visit, and they don’t know how to speak Spanish. It is very sad to see that.”