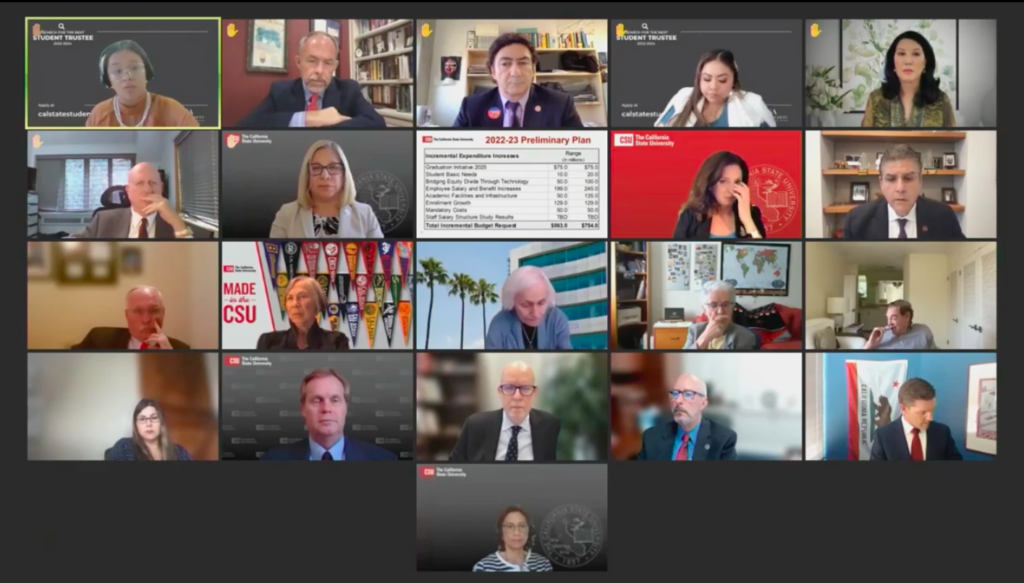 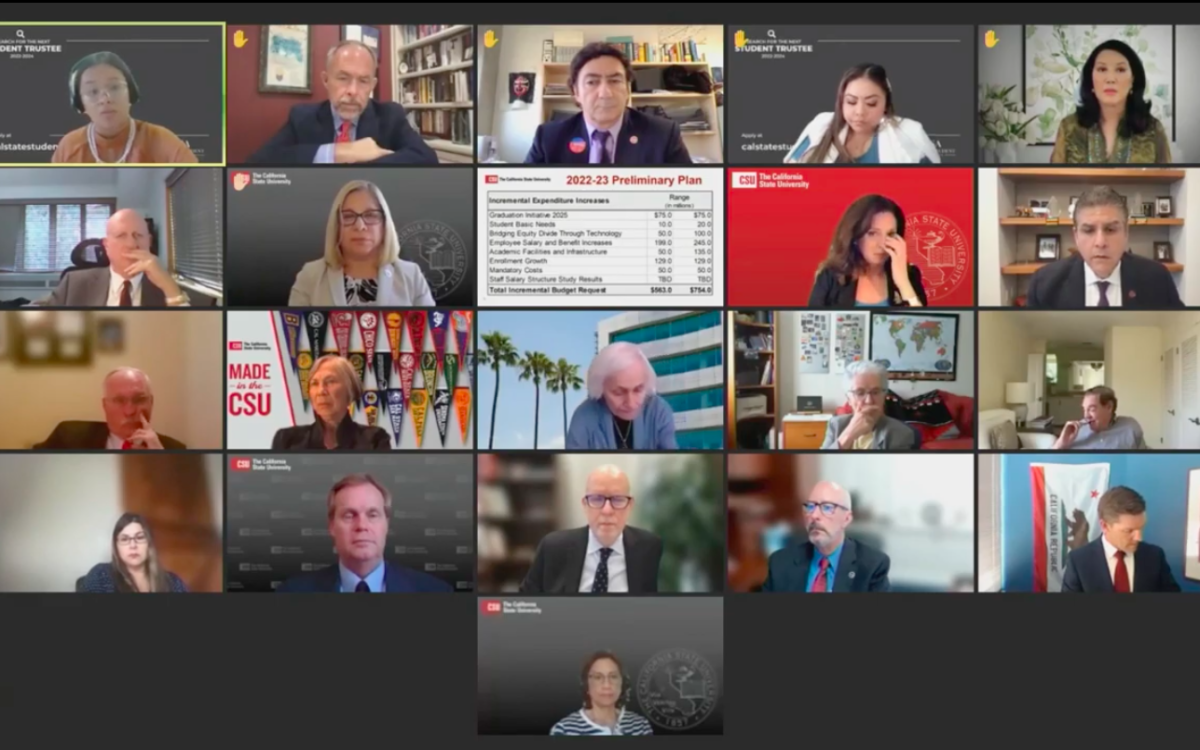 The CSU board of trustees met Wednesday over Zoom.

The CSU board of trustees met Wednesday over Zoom.

“We have a significant issue with the compensation levels of our presidents lagging behind that of comparable institutions,” trustee Wenda Fong said, during the board’s meeting Wednesday. As of January, CSU presidential salaries lag from 6% to 33% below the median salaries in comparable markets, she added.

But the faculty union is criticizing the decision, calling for instructor salary increases for faculty members who are struggling financially through the pandemic.

The CSU compares its 23 campuses to comparable universities nationally based on several factors including campus demographics, profiles, populations and size.

“Our current salaries are not sustainable in a market where highly sought-after leaders have choices about where they commit their time and talent,” Fong said. “If we continue to lag behind our market competitors in terms of compensation, our applicant pool will be limited, although it has not impacted the quality of our leadership. We are increasingly seeing candidates withdraw from consideration or not even explore the opportunity in the first place because of issues related to compensation.”

For example, some of CSU’s highest-paid presidents include San Diego State’s Adela de la Torre at $454,749, CSU Northridge’s Erika Beck at $415,952, and San Jose State President Mary Papazian at $403,433. Those campuses compare to Wayne State University in Detroit, which compensates its president at $892,760, Florida International University at $787,106, and Georgia State University at $719,720 a year, according to The Chronicle of Higher Education.

Some of CSU’s competitors use supplemental compensation or incentive-based programs to raise salaries and remain competitive nationally, but in 2015 the CSU trustees eliminated the ability to use private foundation dollars to supplement salaries.

CSU trustees created a policy in 2019 to assess executive salaries when campus presidents have their performance reviews. Those assessments consider presidential performance and market data to determine pay increases. All executive compensation increases would require approval from the board.

Despite the policy, no campus presidents have received pay increases since 2019. Trustee Romey Sabalius said the board made the decision not to increase executive pay because of the coronavirus pandemic and 2020 budget cuts.

By the end of this year, 13 presidents will have received their tri-annual performance review and will require a salary adjustment, Fong said.

On Wednesday, the board unanimously voted that these raises wouldn’t exceed 10% and would be annually adjusted over three years. Based on the maximum increase allowed under the policy, and if all eligible presidents received the maximum amount, the salary adjustments would cost CSU approximately $750,000. The money would come from CSU’s general fund.

But some faculty members criticized the decision to begin increasing salaries that already are more than $300,000 a year.

“We all made incredible sacrifices last year and should be compensated,” said Charles Toombs, president of the California Faculty Association, the union that represents more than 29,000 Cal State professors both on and off tenure tracks, lecturers including part-time and contingent faculty, librarians, counselors and coaches.

The union is in salary negotiation with the CSU system.

“Last year’s budget cuts hurt all of us and our students, but through our joint advocacy with students, we successfully had our funding restored and then millions more,” he said, referring to a $185.9 million increase in general funds money for CSU from the state and the restoration of $299 million that was part of last year’s pandemic-related budget cuts.

“All of us have earned a 12% total raise,” he said. “The communities we live in are too expensive. We deserve more than a career of freeway flying and living paycheck to paycheck.” “Freeway flyers” describes adjunct or part-time faculty who commute between multiple college campuses to earn what adds up to a full-time wage. Of CSU’s nearly 27,000 instructional faculty about 50% are part-time.

Toombs criticized CSU administrators for claiming they don’t have the money to meet faculty pay demands.

“This is a historic budget,” Toombs said referring to the 2021-22  state budget Gov. Gavin Newsom signed in July. “It’s time for CSU management to show what it values by properly compensating faculty for making the CSU possible and making the CSU thrive.”

Some board members agreed that faculty pay should increase as well.

“The budget is currently solid,” trustee Sabalius said. “And we should compensate our campus leaders fairly. But please let the tide lift all the boats and please advocate for the increase of salary for faculty and staff.”

The board is considering asking the state in its 2022-23 budget for $199 million to $245 million for employee salary and benefit increases. The exact amount won’t be decided until November.

“Anything we can do to keep our compensation competitive for faculty and staff, we’re going to try and do,” said Steve Relyea, CSU’s executive vice chancellor and chief financial officer.