After a rough year, senior formal this spring was both joyous, bittersweet 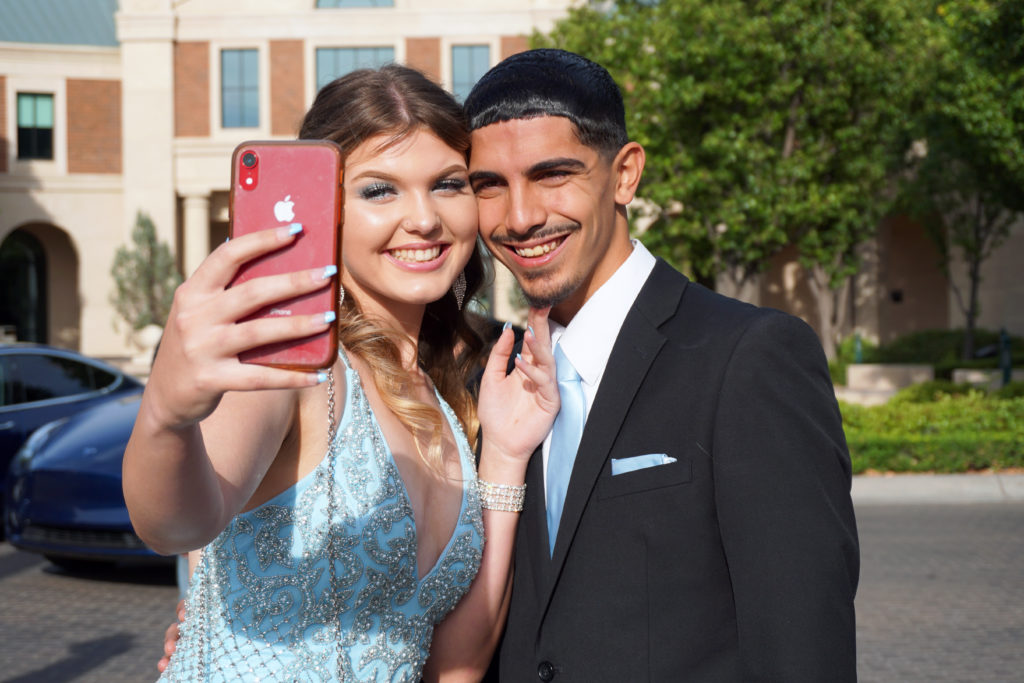 In a perfect night of taffeta and glitter, the most perfect thing of all was Lauren Toon’s sky-blue prom dress.

Lauren’s mother helped her pick the sleek satin gown a year ago – blue to match Lauren’s eyes. Lauren planned to wear the dress at her high school prom last year when she was a junior, but school officials canceled the event at the last minute due to the pandemic.

And then in September, Lauren’s mother died of Covid-19.

Last weekend, Lauren finally got to wear the dress. The occasion: the senior formal at Merrill F. West High School in Tracy, southwest of Stockton in San Joaquin County.

“I wanted to celebrate for my mom,” Lauren said during a break in the festivities. “It’s very emotional. I haven’t cried yet, but a lot of other people have.”

Lauren wasn’t the only one feeling emotional at the event, held in the school’s central quad. West High’s outdoor, socially distanced “non-prom” was one of the few sanctioned, in-person celebrations for the Class of 2021 in California.

After more than a year of distance learning and hardship related to the pandemic, more than 120 seniors gathered in tuxedos and long gowns to celebrate the end of a year like no other.

Dancing was not allowed, but the event had everything else: a catered dinner, a DJ, games, photos, miniature golf, a caricature artist, balloons and streamers — all festooned with “Alice in Wonderland” decorations.

For some students, the night was bittersweet. The celebration made them acutely aware of how much they had lost.

“I’m definitely really excited. And I’m so proud of our class. We’ve worked for weeks on this. It’s been such a long year, I feel relieved we made it,” said Marc Masana, a senior. “But I’m also kind of sad — with everything that’s happened, it feels like our senior year is incomplete.”

Like schools throughout the state, West High closed its campus in March 2020, and students learned remotely for more than a year. In April the school re-opened for hybrid learning, although some students opted to stay remote.

With a diverse, predominantly low-income student body, West High was hit hard by Covid. Many parents lost jobs or toiled long hours on the front lines, either as health care workers or providing other essential services.

Some students looked after younger siblings while their parents worked. Others got jobs to support their families while keeping up with remote learning. Many said they suffered sadness or depression while isolated from their friends and feeling disconnected from school.

And some contracted Covid or had family members or teachers who did. Lauren Toon’s mother, Christine Toon, was a popular special education teacher and volleyball coach at West High before she died. Another teacher-coach, Armando Tailes, got infected twice, spending five days in the hospital the second time and nearly dying.

Zachary Boswell, the West High principal, said the hardships and tragedies ultimately brought the school community closer. Younger teachers helped older teachers with distance learning technology, and everyone pitched in to solve problems. In the fall, the school held a gathering at the school for Lauren’s mom.

“We learned how to help each other in hard times,” Boswell said. “We learned a lot about collaboration, how to support each other. We’ve always been a relationship-based school, and that’s what really helped us get through this past year.”

Scott Benham, an English teacher and activities director, described the pandemic as “gut-wrenching and heartbreaking” for many students. Not only did they miss seeing their teachers and friends, but they also lost activities like sports, clubs, drama, pep rallies and dances — the heartbeat of any high school.

That’s why the senior formal was so important, he said. It was a chance to experience school spirit, if only for one night.

“The pandemic was brutal for so many kids. So, for our seniors, we knew this event was critical,” he said. “If we didn’t do anything, we’d be cheating them out of the high school experience.”

Students had jumbled emotions — mostly ecstatic but a little sad, too. In either case, they said they wouldn’t miss the event for anything.

West High senior Keona Siufana has a close-knit family and, as an introvert, said she was comfortable being home during the pandemic. But after months of distance learning, even she experienced a degree of loneliness, she said.

And she worried about her parents working during the pandemic, her father at FedEx and her mother in retail. Helping plan the senior formal was a welcome relief from a year of uncertainty, she said.

“I am super excited about the event and so thankful we’re able to do it,” she said. “But I guess I have mixed emotions because it means we’re all going to leave and become adults.”

For Izaiah Quiruz, a junior who served on the event planning committee, there was nothing bittersweet about the event. It was a hundred percent joy.

“I love being back at school,” he said. “I had some real low points this year. School is my second home, so tonight means a lot. It’s a step towards normalcy. To be out, see friends, have a meal, have human interaction … it’s just so nice.”

Over the past year, several of Tianna’s family members contracted Covid, including her mother, who became seriously ill. Her father, a flooring contractor, was also out of work for a while. Quarantining at home was hard on the entire family, she said.

“It was especially hard when my mom was sick,” she said. “We’re really close, but I couldn’t be with her. I had to stay back. I hated it. … To be able to see everyone tonight is just amazing. I’m so excited to finally see some smiles.”

Raevyn Kaigler, ordinarily a straight-A student, was so sad being away from in-person school that her grades dropped this year, she said.

“I’m a social person, and for me, it was really difficult to be isolated from my friends,” she said. “But I learned I can handle more than I thought I could. I found some hobbies, and figured out distance learning and got my grades back up. … I think I learned a lot about myself this year.”

Seniors Gianna Uribe and Stella Hunt, heads of the planning committee, said their friendship got them through the year of distance learning, especially when Stella and her father both contracted Covid. After Stella recovered, she and Gianna would drive to the canal — an agricultural aqueduct that runs through Tracy — and watch the sunset and muse on the state of the world.

“It felt like we were living through history,” Stella said.

That sense of momentousness was, for them, the main reason to plan a senior formal, they said.

“We felt we needed to give people something to look forward to,” Gianna said.

Stella added, “If you’re in high school, the prom is a big deal. It’s the biggest night of your life. We felt we really had to make this happen.”

After a night of socializing and celebrating, West High’s Class of 2021 will soon part ways. Keona plans to spend next year on a church mission. Raevyn is working at Jamba Juice this summer, then heads to Cal State Fullerton to study kinesiology. After a summer working at Ace Hardware, Marc plans to study economics at Cal State Long Beach. Stella and Gianna don’t have concrete plans yet but will probably stay in Tracy and go to community college.

After her mother died, Lauren Toon decided to graduate early from high school — in December — and pursue a passion she and her mom shared: sports. In January, Lauren enrolled at William Jessup University near Sacramento, where she’s on the volleyball team.

But when school officials invited her back to Tracy for the formal, she didn’t hesitate. The chance to return to the campus where her mother taught, wearing the dress her mother chose, was a chance to pay tribute to her mom, she said. Lauren even wore her mother’s pearls to the event.

“I wanted to be here with my class,” she said. “I think that would have made my mom happy.”