As she and her family battled Covid-19, graduation seemed out of reach 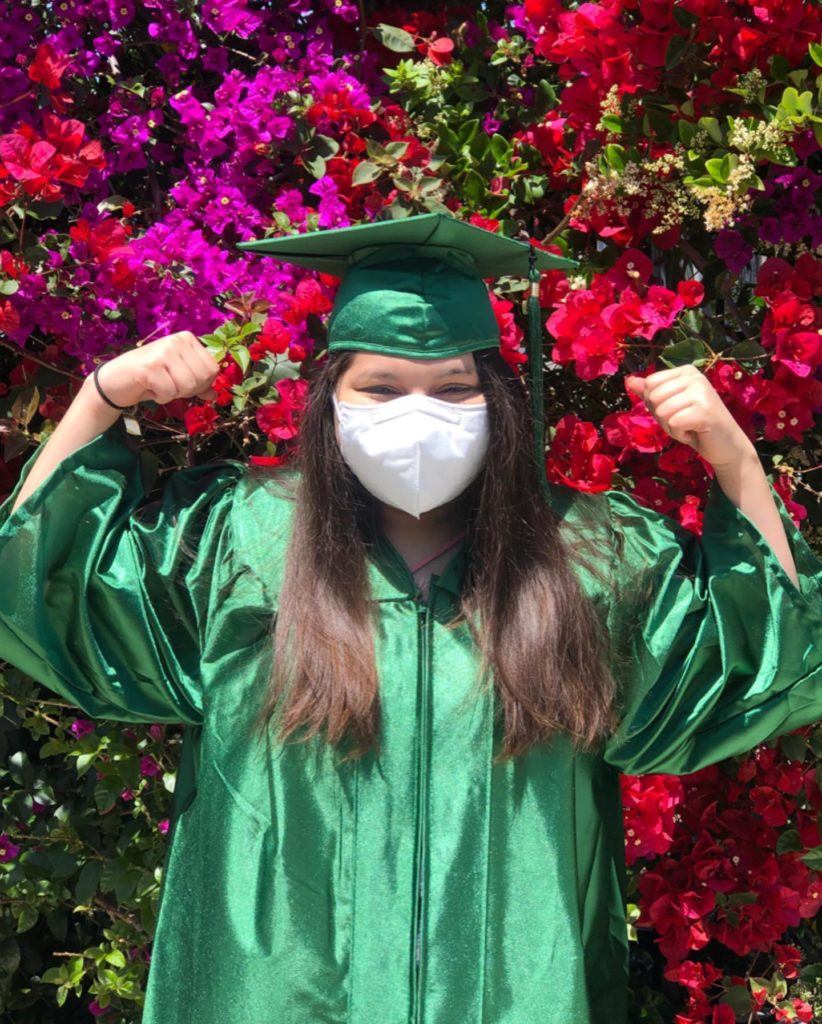 Pandemic challenges a Hayward student, first in her family to graduate from high school 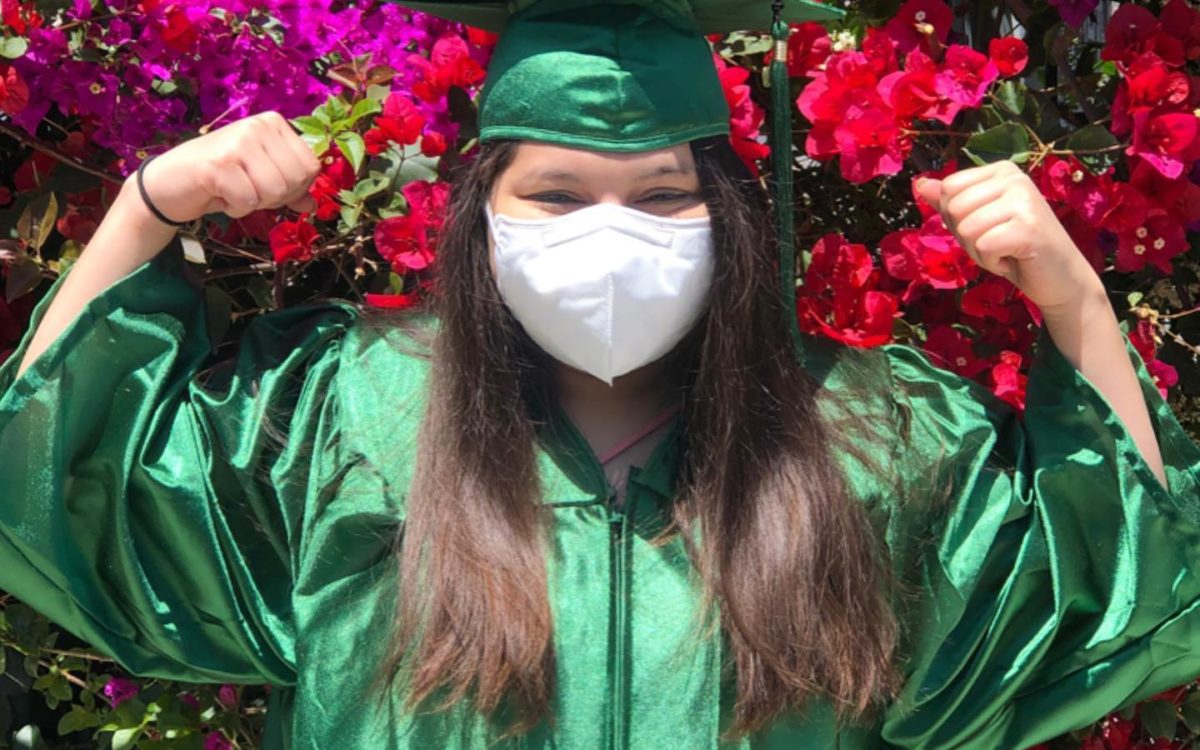 For months before the coronavirus pandemic hit, Maria Amaya was working two jobs while raising her daughter and finishing high school at a continuation school in the San Francisco Bay Area.

On most days, she would attend school in the mornings, arrive by noon for her receptionist job at a local non-profit recycling center, then work her manager shift at Popeyes until 11 p.m. Her days off were for completing homework assignment and spending time with her daughter. Maintaining her drive and schedule was already a challenge on any given day, even prompting her to temporarily leave continuation school earlier this school year.

Her goal was getting to Friday’s graduation and become the first person in her family to graduate high school. Then her family came down with Covid-19, the disease caused by the coronavirus.

“I honestly thought…that I wasn’t going to graduate,” said Amaya, 19.

Her mother started feeling the now-familiar symptoms in late April. She insisted on staying home because she didn’t want to leave her children. But on May 5, Amaya knew her mother had to go to the hospital once her breathing became labored.

That night, she rushed her mother and stepfather, who was also sick, to the St. Rose Hospital emergency room in Hayward, just south of Oakland. Amaya was home by midnight, tearful and afraid, not knowing what would come next. Two hours later, the hospital called to tell her that her mother, Maria Juana Amaya, was going on a ventilator. She’s been on it ever since.

With her mother in the hospital and classes still being held online, Amaya now had to care for both her three-year-old daughter, Alicia Amaya, and her four-year-old sister, Kimberley Amaya. Since her sister was born, Amaya has taken her to countless doctor appointments for severe dermatitis, sometimes missing class. Her sister and daughter have grown up together, with Amaya’s mother caring for them while Amaya attended school and worked.

“She’s the first in her family to read and write,” said Davida Scott, Amaya’s mentor and a teacher at Hayward Adult School. “You’re not only having coronavirus, but also being a teen mom, being in high school working full-time and never complaining,” she added, noting the recent stress Amaya has been under.

Just a few hours after receiving the news about her mother, Amaya began feeling shortness of breath. She was tested for Covid-19, and the next day learned she was positive.

She was tested so quickly thanks to the help of Alameda County Supervisor Richard Valle, the founder of the recycling center where she works, Tri-CED Community Recycling. When Amaya told him about her symptoms on May 6, he called for medics with the Hayward Fire Department to administer a test at her home.

“We take an interest in everyone that works here,” said Supervisor Valle. “She’s been off I think for three weeks with full pay. One of our next steps is to help her get childcare.”

Of the seven people living in the three-bedroom apartment, only Amaya, her mother and her stepfather tested positive. Her daughter and sister had no symptoms, so she arranged for an aunt to take them in.

Amaya’s symptoms worsened: shortness of breath, a fever that lasted 21 days, stomach pain. She was so exhausted that a week passed before she could notify her school that she was sick. Amaya kept doing her schoolwork, but it was hard for her to focus. She remembers joining a remote class a few days into testing positive, but with her mother in the hospital, her daughter and sister staying with her aunt, and worsening symptoms, she felt demoralized and depressed.

The prospect of graduating this school year suddenly felt distant. She had come so far.

As a child in elementary school, she woke up daily to join her parents to search for bottles to recycle for money. She’d then go to school for the day, only to join the search again in the evening.

“It was really hard for them to find a job because they are immigrants,” said Amaya, whose family is from El Salvador. “I didn’t have much. Most of the stuff was from the garbage. I had some classmates who would donate clothes to me.”

Shortly after, her father died of liver disease. By middle school, her mother secured a job at a bakery, and they no longer had to wake up every morning to search the streets for bottles.

Even in her sorrow at losing her husband, Amaya’s mother held onto a dream that one day she would see her daughter dressed in a cap and gown. But when Amaya became pregnant at 16, she missed several classes and final exams, leaving her a few credits short of what she needed to graduate high school with her peers.

“Most of my family thought I wasn’t going to graduate because I had my daughter at a young age,” she said. Despite the doubts, Amaya remained determined.

She enrolled at Brenkwitz High School, a continuation school in Hayward, studying to finish her credits when her best friend signed her up for Raising Leaders, a program based at Hayward Adult School.

Founded in 2017, Raising Leaders targets students in alternative education schools who are often in foster care, have been expelled, are on probation, are low-income, or are otherwise at an academic disadvantage. In exchange for academic credits, students attend workshops held at Hayward City Hall where they hear from firefighters, lawyers, nurses, city attorneys, county supervisors and other local professionals from similar backgrounds.

Scott, who organizes the workshops, convinced Amaya to return to Brenkwitz after she left to pursue independent studies. Amaya wanted to work overtime to earn money for her family.

“I knew the pressure that Amaya had to work more and provide more for her family. I told her: you need to understand that your education comes first,” said Scott. “Right now, this is what you need to do.”

Amaya returned, knowing that she would be a role model for her daughter and younger sister.

When Amaya wondered  if being sick would keep her from getting course credits so she could graduate, Scott called her principal, Kwasi Reed who determined she was eligible for graduation. Soon after, he showed up at Maria ‘s front door to deliver her cap and gown.

“It was the right thing to do,” said Reed about delivering the cap and gown for the school’s virtual and car parade graduation. “She worked real hard: she’s a mom, she was doing the internship with Richard Valle, she was doing all these things to move forward. It would’ve been unfair if she did not have it.”

On Friday,  Amaya will officially be a high school graduate. Her mother remains in the hospital, but doctors have assured Amaya that her health is improving, and she will soon be able to return home. She’s on a ventilator, but she is able to breathe on her own for short periods of time.

“I have always wanted to be the best for my mom and give her everything because she has done everything for me,” Amaya said.  “I just want to pay it back.”

She hopes that by Friday her mom is off the ventilator and less sedated so she can see the photos on her cell phone of Amaya in a cap and gown, as her parents always dreamed.

“I can’t wait to tell my mom that we did it,” said Amaya.

Leave a Reply to Deborah James