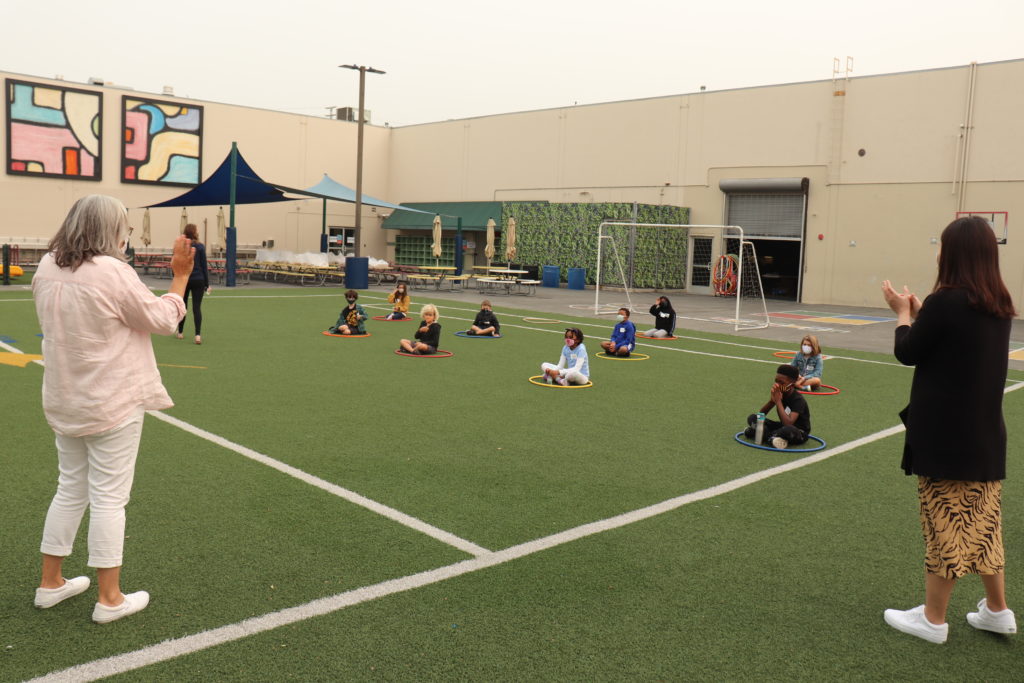 Few public schools have received waivers; only one has a high number of low-income students 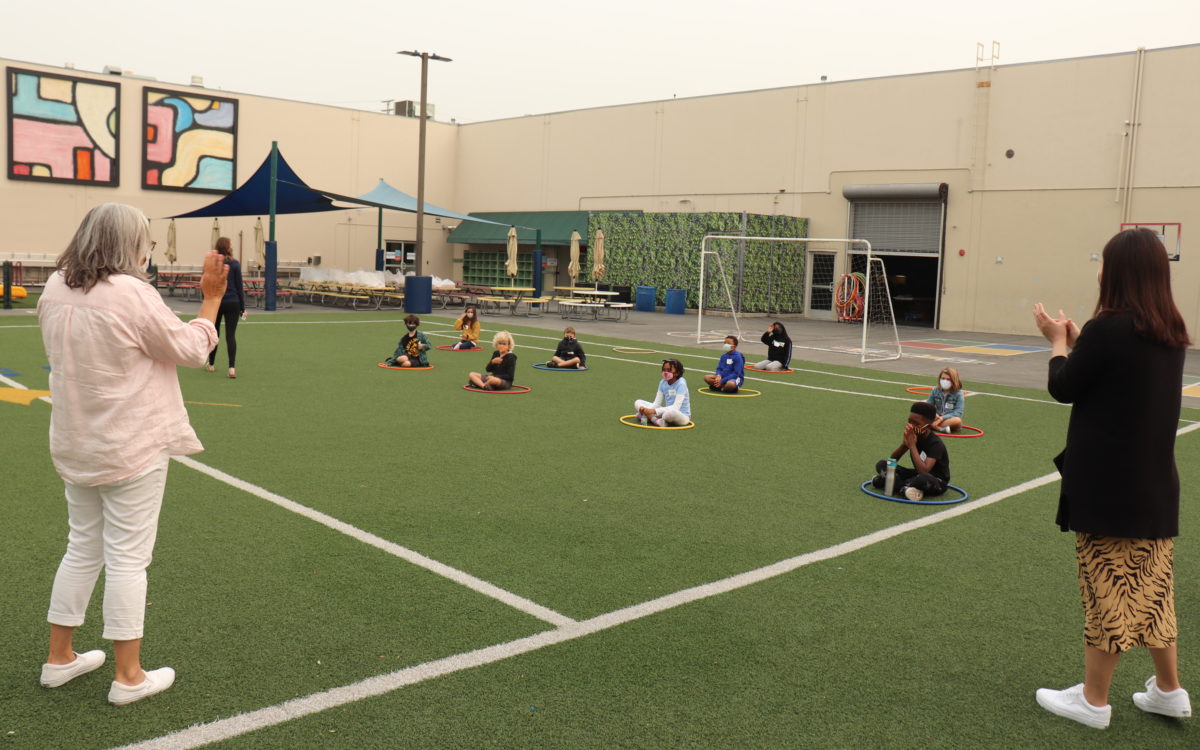 Los Angeles elementary schools located in predominantly low-income areas were expected to be at the front of the line to bring back their youngest students to campus through the county’s waiver program, but they remain largely absent from the application pool.

Private schools continue to dominate the county’s reopening ranks. And of the few public schools that have been granted waivers, only one has a high proportion of students who can be considered low-income by qualifying for free and reduced-price meals.

Why is the number of low-income schools on the reopening list so low? Many are not applying for the waivers, which was devised by the L.A. County Board of Supervisors and allow schools in the county to bring back students from transitional kindergarten to second grade for in-person instruction.

Some school officials are waiting for fear of transmission in areas that are hotspots. Others believe the small number of waivers granted each week could lead to greater inequity within school districts during a public health crisis that already has deepened the chasm between the rich and the poor. Some elementary schools, for example, within a school district could be approved for a waiver while others may not.

From Compton to the San Gabriel Valley, the waiver process has been fraught with debate — raising issues of safety and fairness.

“We talk so much about equity and there is nothing equitable about this,” says Darin Brawley, superintendent of Compton Unified. “This will create a situation of the haves and the have-nots. How do I look a parent in the eye and tell them that their kid can’t go back to school, so they can remain gainfully employed? This will create hostility between parents.”

Note: Data collected as of Nov.6

In the first month since Los Angeles County began its waiver process, the county has received 233 applications. The list includes at least 134 private schools, 71 traditional public schools and five charter schools. Only about a third of those applications have been granted waivers, with the bulk of the approvals coming after the county streamlined the application process. (Elsewhere in the state, county health officers in consultation with the California Department of Public Health have the authority to grant waivers for in-person instruction even in counties that are still on the state monitoring list to schools and districts serving TK-6 students.)

The L.A. county waiver process got off to a very slow start because county health officials initially required schools to provide letters of support from faculty and school PTAs. Once that requirement was dropped on Oct. 26, the number of applications increased. However, small schools, which can navigate shifting conditions more nimbly, still appear to have an advantage over large ones.

“It’s much easier when schools are small and when they’re autonomous, so they can make their own decisions as a campus and not need to make a decision for a whole big group of schools,” said Deborah Dowling, executive director of the California Association of Independent Schools.

Los Angeles County, which remains in the state’s most restrictive purple tier for reopening, just recently increased the number of waivers it intends to grant each week to 50 schools.  The waivers must be equally distributed among the county’s five supervisorial districts.

L.A. County’s Supervisorial District 1, which includes several of the most densely populated cities in the county — like Maywood — and District 2, which includes neighborhoods with the county’s lowest median household income — like those in South LA — should be at the front of the line out of the county’s five supervisorial districts. Instead, District 3, which includes several neighborhoods with the highest household incomes in the count, such as Beverly Hills, has by far outpaced all other areas, with nearly 50 private schools applying by last Wednesday — nearly as many privates as all other districts combined.

One of the reasons some public school districts are holding off on waivers is a matter of representation. Some say that the pipeline, which until recently was just 30 schools a week, divided among five supervisorial districts, is far too small for one of the largest counties in the nation, one that encompasses 80 school districts including the nation’s second-largest, Los Angeles Unified.

Los Angeles Unified Superintendent Austin Beutner recently sent a letter to Gov. Gavin Newsom, co-signed by superintendents of six other large districts in California, calling on him to impose a “common standard”  for reopening schools around the state.

“Los Angeles Unified continues to work on plans for students to return to schools as soon as it’s safe and appropriate to do so,” said a spokesperson for the district, which has not applied for any elementary school waivers.

Some school officials are calling for the county to expand the waiver program to grant approvals to school districts, not just to individual schools.

“The elephant in the room remains the nominal acceptance rate of 30 schools per week by the county,” said Alex Cherniss, superintendent of Palos Verdes Peninsula Unified. “The county must expand this to entire districts of schools to make it a practical near-term solution. If not we’re all just spinning our wheels.”

Take Compton Unified School District, a district with 21 elementary schools where 93% of students qualified for free and reduced-price meals in the 2019-20 school year — precisely the kind of demographics the waiver program intends to target.  Brawley, superintendent of Compton Unified, which is geographically part of L.A. County’s Supervisorial District 2, does not plan to apply because the numbers don’t add up for him.

Only some schools in his district can be approved in any given week; the rest would have to remain closed. This would create discord, he says, at a time when the community needs to come together.

“How do you explain that to your community, if only one school gets approved?” Brawley asked. “It’s an untenable situation that can create a hostile dynamic among the parents.”

Another key reason some districts are not applying for waivers are concerns about safety regarding the coronavirus. Some worry that targeting lower-income areas may backfire in terms of fueling outbreaks in hotspots.

“Certainly, there’s a desire to close the achievement gap,” said Cristina Alvarado, a board member for the San Gabriel Unified School District, in which 58% of students were eligible for free and reduced-price meals in 2019-20. “That’s what is driving this process, but it’s definitely a double-edged sword. You want to address the most needy, but are you also targeting the communities that are the most vulnerable? Are we putting them at risk? There are no easy choices.”

While she is concerned with learning loss, Alvarado worries more about the health and welfare of family members who may be exposed to the virus through children returning to the classroom.

“The last thing we want to do is put people at risk,” said Alvarado, adding that San Gabriel Unified has extended its plan for remote learning until at least Jan. 19, 2021. “That includes children, teachers, parents and grandparents. Safety has to come first.”

While officials in districts with low infection rates may feel comfortable reopening schools for young learners, those in harder hit areas may be less likely to take that gamble with their children, who already must cope with myriad heightened risk factors.

“The pandemic has been most impactful to communities in the First District whose residents are most often essential workers, most likely to live in dense housing conditions, and least likely to have access to healthcare,” said Los Angeles County Supervisor Hilda L. Solis. “All of these factors put students at greater risk of exposure and infection.”

Some also raise concerns that opening and closing schools repeatedly because of Covid-19 surges will place undue strain on children and families. Health experts warn that outbreaks will be unavoidable as campuses reopen.

“We’re seeing districts come back and having to shut down again because of cases and clusters. We’re also watching that, and disruptions are never good for kids,” said Ryan Foran, chief communications officer for Arcadia Unified School District, where most of its 10,000 students are doing remote learning. “We’ve already disrupted students’ education once.”

However, there are those who applaud the county for trying to gradually reopen schools while also addressing pressing issues of social justice during a time of widespread hardship and crisis.

“I must admit that although it’s frustrating to know that submitting a completed waiver application early in the process doesn’t mean much, there is a part of me that understands why there would be a focus on schools in low-income areas,” said Crystal Pinkofsky, principal of Saint Paul the Apostle School, where full tuition is about $15,000 a year. “If those students must depend on their schools to provide nutritious meals, technology devices, reliable internet connections, they are deserving of being placed at the top of the list.”