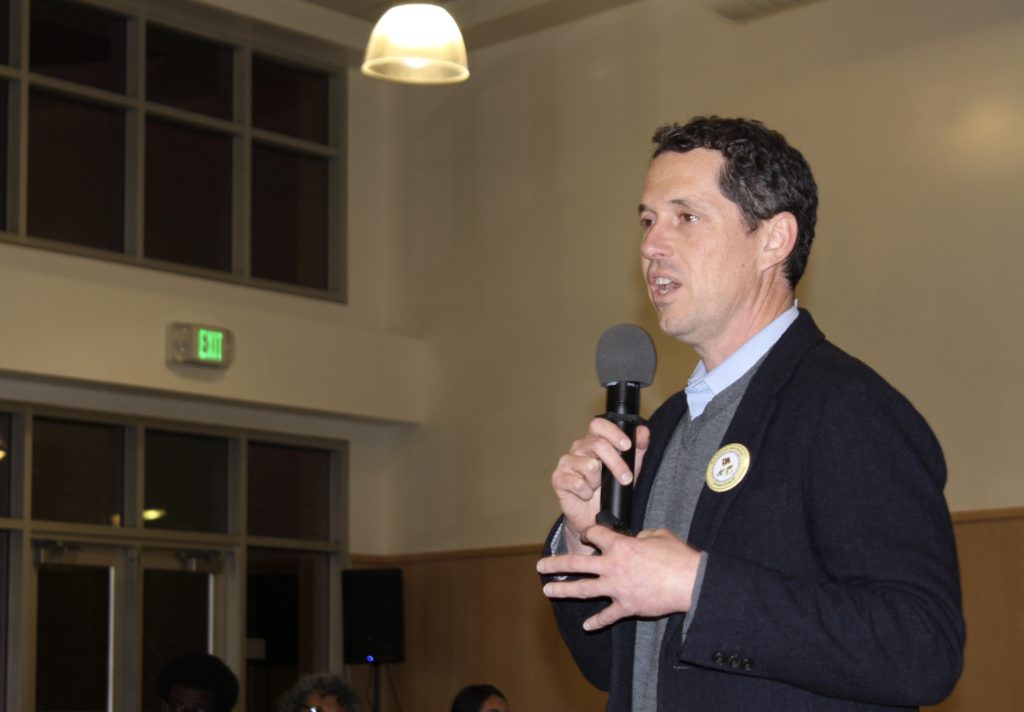 Theresa Harrington/EdSource Today
West Contra Costa Unified superintendent Matthew Duffy announced Thursday that he would not seek reappointment after the school year when his contract ends.

Theresa Harrington/EdSource Today
West Contra Costa Unified superintendent Matthew Duffy announced Thursday that he would not seek reappointment after the school year when his contract ends.

West Contra Costa Unified Superintendent Matthew Duffy announced Thursday that he will not seek re-appointment when his contract ends at the conclusion of the school year next June.

District officials, in a separate message Thursday about Duffy’s departure, touted his accomplishments, which include increasing graduation rates and reducing suspensions and expulsions, as well as ushering in the Bay Area’s first district-run Mandarin language immersion school, as well as three new campuses. Duffy’s current yearly salary is $274,500.

“It has been an unbelievable blessing for me and my family to have shared in the story of the West Contra Costa Unified School District for the last five years,” Duffy said in his announcement. “I have done everything in my power to act to make the district a better place. This district is unique and complex, stretching itself to serve many different cities and communities. It has been an absolute joy to work to meet the needs of so many different people.”

With a student body of 32,000, the district is the 26th largest in California. It encompasses several San Francisco Bay Area communities, including Richmond, San Pablo, Pinole and Hercules.

By the time he leaves, Duffy’s tenure will be about average for a superintendent of a large urban district. His announcement came just days after school board elections that will usher in a new majority. As the result of a lawsuit, it was the first time candidates had to run in one of five electoral districts rather than at-large.

Three of the five school board members decided not to seek re-election this year. School board member Mister Phillips ran unopposed. Tom Panas, the other incumbent, was trailing behind opponent Leslie Reckler in early returns, though official election results have not yet been announced. The newly elected board members take office next month. They were all backed by the United Teachers of Richmond, the union representing teachers in the district.

“The community has spoken, and they want fresh leadership perspectives to guide the future of our schools,” Duffy said in his announcement. “The current board should defer to this new crop of leaders to give them the space and time to fully own the process of finding my replacement.”

Duffy has faced harsh criticism from some members of the public since 2019, when the district’s predicted deficit ballooned from $10 million to $48 million. But after making sharp cutbacks, the district is expected to close the books this school year with a small surplus.

Some board members considered terminating Duffy in 2019, but ultimately decided not to. At his most recent performance review in June, Duffy scored an “intermediate” — meaning his contract was not automatically extended after the school year, though it’s unclear if his handling of the budget crisis had an impact on his score.

“It is time for the school district to go in a different direction,” school board member Mister Phillips said via email.

The district ended up cutting more than $30 million in ongoing expenditures from its current year budget, resulting in larger class sizes, as well as losing support staff, such as transitional kindergarten aides and some manager positions. It also meant ending some contracts, such as certain software programs for teachers, and trimming school site discretionary budgets.

Prior to Thursday’s announcement, the West Contra Costa Unified school board had scheduled a special meeting for Friday to discuss the search for a new superintendent. Duffy would have been a potential candidate had he not made his announcement.

Instead of seeking an extension on his contract, Duffy said he will help with the transition of new school board members, and their choice of a new superintendent.

Chief Business Official Tony Wold, who was hired by Duffy, said Duffy’s decision to announce now that he would not be seeking reappointment shows strong leadership. It gives district officials and school board members clarity as they navigate reopening plans and choosing a new superintendent, he said.

“I’m convinced (Duffy) is going to make even more of a difference in the next seven months than he would have been able to do without doing this,” Wold said.

Marissa Glidden, president of the district’s teachers’ union, the United Teachers of Richmond, thanked Duffy for his leadership in transitioning the district to distance learning during the Covid-19 school closures. She would not comment on Duffy’s handling of the district’s budget crisis.

“We really appreciate all that he’s done and his service and wish him well in his next endeavors,” Glidden said. “We appreciate his guidance, and support for teachers during this very challenging last few months.”