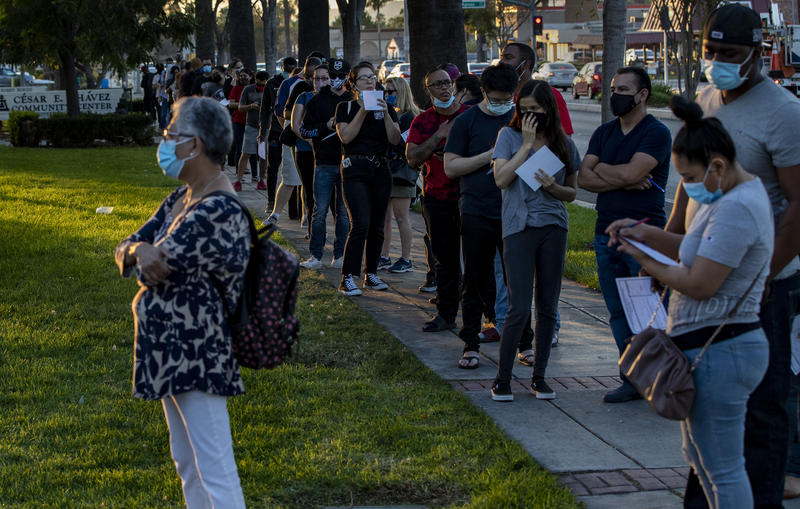 Credit: Gina Ferazzi/Los Angeles Times/Polaris
The line stretched out to the sidewalk along University Avenue as voters wait for almost 3 hours to cast their ballot on Election Day at the Cesar Chavez Community Center on November 3 in Riverside.

Credit: Gina Ferazzi/Los Angeles Times/Polaris
The line stretched out to the sidewalk along University Avenue as voters wait for almost 3 hours to cast their ballot on Election Day at the Cesar Chavez Community Center on November 3 in Riverside.

For the second time in a quarter century Californians appear to have overwhelmingly rejected affirmative action.

Unofficial returns show voters on Tuesday defeating Proposition 16, which would have allowed California’s public agencies, universities and community colleges to consider race, gender and ethnicity when making decisions on contracting, hiring and student admissions. Prop. 16 was designed to overturn Prop. 209, which banned affirmative action in 1996.

With 100% of the precinct votes counted, 56.1% of votes cast are against the measure, while nearly 44% of votes are in favor, but at least several million mail-in, provisional and same-day registration ballots were still being counted.  There were 6.4 million votes rejecting the measure and 5 million approving it, according to unofficial results.

The largest share of yes votes – more than 2 million –  were cast in the Los Angeles and several Bay Area counties while voters in nearly all of the other counties across the state appear to be rejecting the measure. (Go here for the latest results on Propositions 15, 16 and 18.)

The measure would have allowed California’s public agencies, universities and community colleges to consider race, gender and ethnicity when making decisions on contracts, hiring and student admissions.

“We have successfully defeated a far-left measure in America’s bluest state,” Wenyuan Wu, executive director of Californians for Equal Rights, and head of the No on 16 campaign, said in a statement issued early Wednesday. “We won and the principle of equality has prevailed again, against a powerful opponent backed by the political establishment, corporate billionaires, and special interest groups.”

Prop. 16 attracted $19 million in cash through seven campaign committees and support from the state’s Democratic establishment, but didn’t appear to catch on with the public. Assemblymember Shirley Weber, D-San Diego, led the legislative initiative to put Prop. 16 on the ballot.

Typically, propositions get to California voters through the collecting of thousands of signatures in support. Some political observers say how the proposition got to the ballot explains why the Yes on 16 campaign trailed in two statewide September polls.

Opponents cast Prop. 16 as violating the civil rights of qualified students not admitted to the University of California and California State University to make room for underrepresented students — Blacks, Latinos and Native Americans.

Prop. 16 brought former UC regent Ward Connerly, the father of Prop. 209, back to California from his home in Idaho to help fight off the challenge.

In an interview with EdSource last month, Connerly, who is black, said he believes there is no systemic racism in America, and that Prop. 16 was an attempt to seize power in California. He predicted whites would flee the state if affirmative action returns.

Supporters of Prop. 16 said affirmative action would allow the state’s public universities to recruit and support underrepresented students with targeted scholarships and programs and seek candidates to increase faculty diversity.

An EdSource analysis of student enrollment data over the last 24 years shows that the affirmative action ban had a huge impact on California’s public universities with gaps between underrepresented students enrolled and high school graduates and those qualified for admission.

“California is known for being the best,” she said after the state legislature voted to put Prop. 16 on the ballot. “Now is the time to step up and make that a reality.”