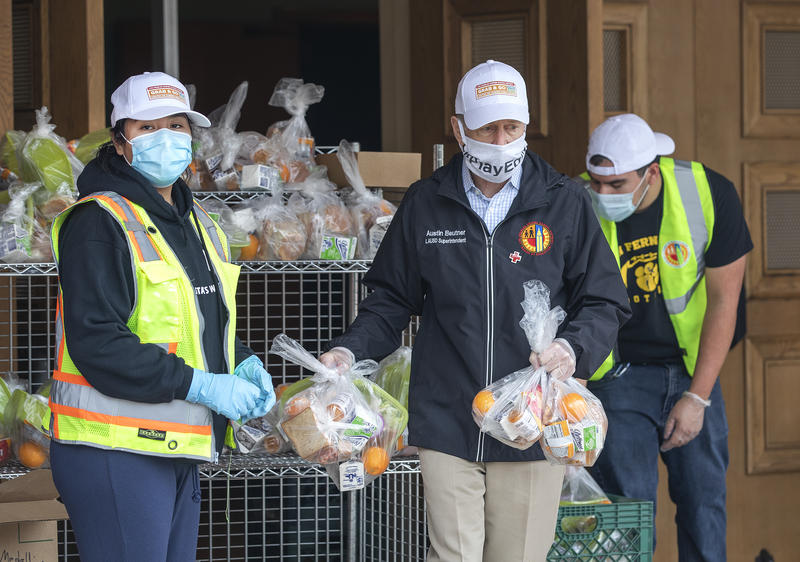 Districts are now able to serve meals to any student, with no eligibility requirements, as they did over the summer

After pressure from lawmakers and districts, the US Department of Agriculture announced Monday that it is extending the federal waivers that allow schools to offer free grab-and-go meals to any student, regardless of eligibility.

The waivers — including the “Seamless Summer Option” and the “Summer Food Service Program” — have made it possible for California districts to distribute millions of grab-and-go meals to students since campuses closed due to Covid-19.

Some districts, including Fresno Unified, said the rule change created a logistical nightmare for them. Because they had to check for eligibility, it slowed down the process to the point that people could be turned away.

Congressman Robert C. “Bobby” Scott (D-Va.) and Senator Debbie Stabenow (D-MI) had urged the USDA to use its authority and funding to extend the programs through the 2020-2021 school year. Although US Secretary of Agriculture Sonny Perdue initially denied their request, the department announced Monday that the flexibilities would be extended until at least Dec. 31.

“As our nation reopens and people return to work, it remains critical our children continue to receive safe, healthy and nutritious food,” Perdue said in a news release. “During the Covid-19 pandemic, USDA has provided an unprecedented amount of flexibilities to help schools feed kids through the school meal programs, and today, we are also extending summer meal program flexibilities for as long as we can, legally and financially.”

Perdue, in an Aug. 20 letter to Stabenow, said that the department lacked the authority to extend the waivers through the school year. He said that would create something more like a “universal school meals program which Congress has not authorized or funded.”

Rep. Scott and Sen. Stabenow responded last week, arguing that the department did in fact have the authority to do so under the Families First Coronavirus Response Act.

The department, in its Monday announcement, said the waiver extensions were based on “current data estimations.” The department had been calculating how long it could continue reimbursing districts for free meals with the funds it had available. Based on the most recent data from April, it projected that it could offer the extension through the rest of 2020. The USDA will continue monitoring the data as it comes in and will “keep Congress informed of our current abilities and limitations,” according to the announcement.

Stabenow, in a statement issued Monday, said the decision was “a positive first step forward that will ensure millions of children in Michigan and across the country will get the healthy food they need to learn and thrive,” but called on the USDA to continue extending the waivers through the end of the school year.

In addition to allowing districts to continue serving grab-and-go meals for free to any student, the waivers also allow districts to serve meals at any time, outside typical settings and to students not enrolled in that district. And it allows parents and guardians to pick up meals for their children — instead of requiring the children to be present to pick up the meals.

West Contra Costa Unified, in the Bay Area, announced Monday afternoon that it would resume offering free breakfast, lunch, supper and snacks for no charge at 15 of its schools throughout the district from 8 a.m. to 1 p.m. Tuesdays and Thursdays. Since the district kicked off the year Aug. 17, it had been charging students for grab-and-go meals who weren’t qualified as low-income.

“This is great news for WCCUSD families in this time of uncertainty and crisis, and ensures that children will not be without food during the Covid-19 pandemic and resulting school building closures,” Superintendent Matthew Duffy said in a news release. “We know this is an important resource for families and it eases the uncertainty about student meals through at least the end of the calendar year.”

Mark Chavez, nutrition services director at Long Beach Unified, said the department’s announcement seems like good news. But districts as of Monday morning had not received any formal guidance on how to implement the waiver extensions. Many questions remain, he said, including whether there will be age restrictions on meals that are reimbursed and if districts that have already started the school year will be retroactively reimbursed for the meals they have provided.

The decision also doesn’t get to the heart of the issue many districts are facing, he said.

“On the surface, this is great for families, and all community youth appear to be included in this decision to allow meals to be accessible at no cost,” Chavez said in an interview. “And it gives school districts more breathing room to figure out plans and meal program logistics through the end of the 2020 calendar year.”

But he said a challenge that was not addressed is the sharp decline in student participation in school meal programs, resulting in major fiscal deficits across the spectrum in school districts.

Before Covid, the district was serving around 50,000 meals a day, Chavez said, but once campuses closed down the district was only serving around 20,000 grab-and-go meals a day. That means less revenue from the USDA, but the same fixed labor costs. Governor Gavin Newsom and the state legislature banned layoffs of nutrition service workers and certain other classified workers in the state budget deal.

“Without generating the participation back up to 50,000, you’re not covering what your fixed labor costs are going to be, and you’re going to have to turn to the general fund of the district,” Chavez said.

Chavez said advocates have been calling on the USDA and lawmakers to solve the issue by funding all school district meal programs based on their level of participation prior to Covid, but that lawmakers have for the most part remained silent on the issue.