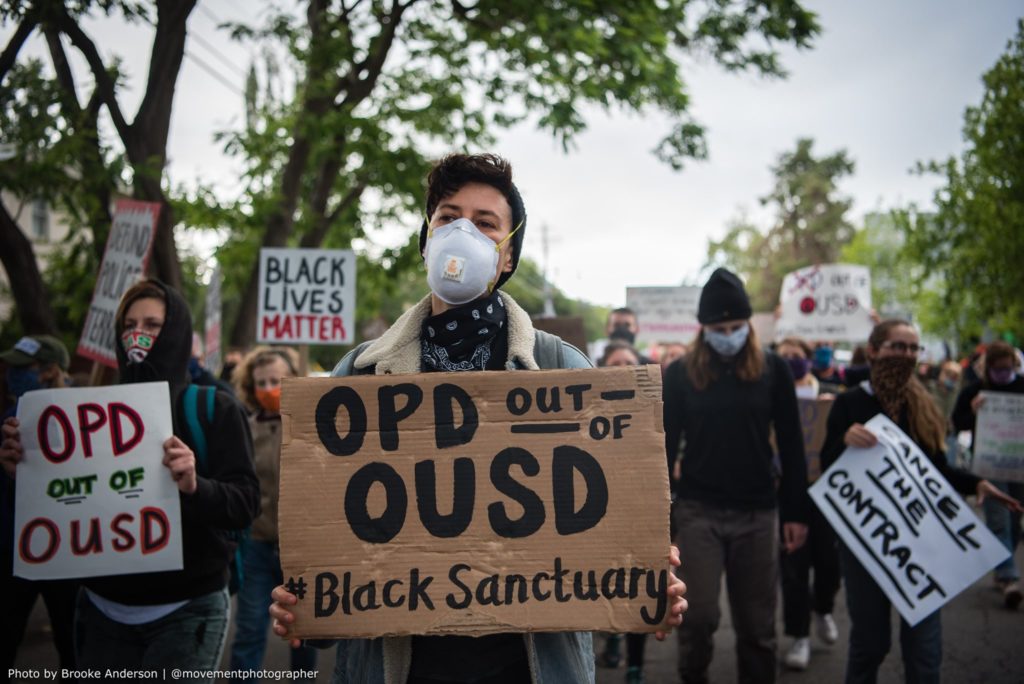 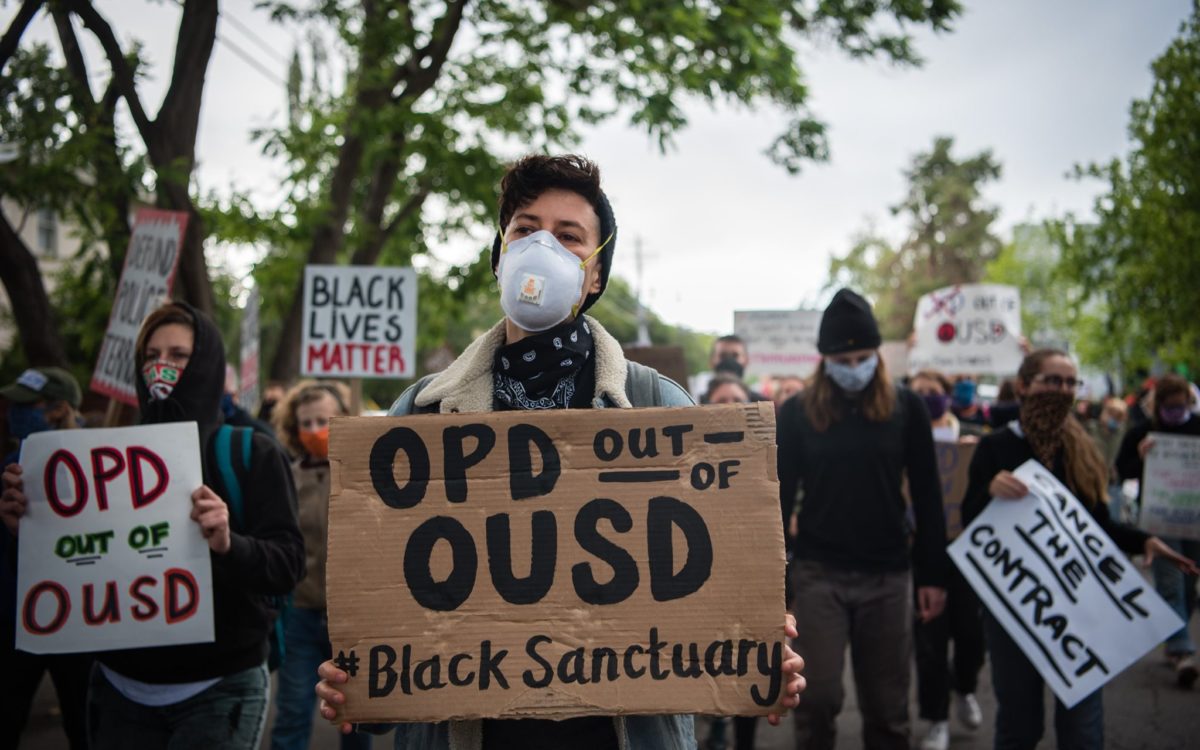 A majority of the Oakland Unified school board, along with the superintendent, on Wednesday signaled support for dismantling the district’s police force. But the board won’t vote on the proposal until June 24. 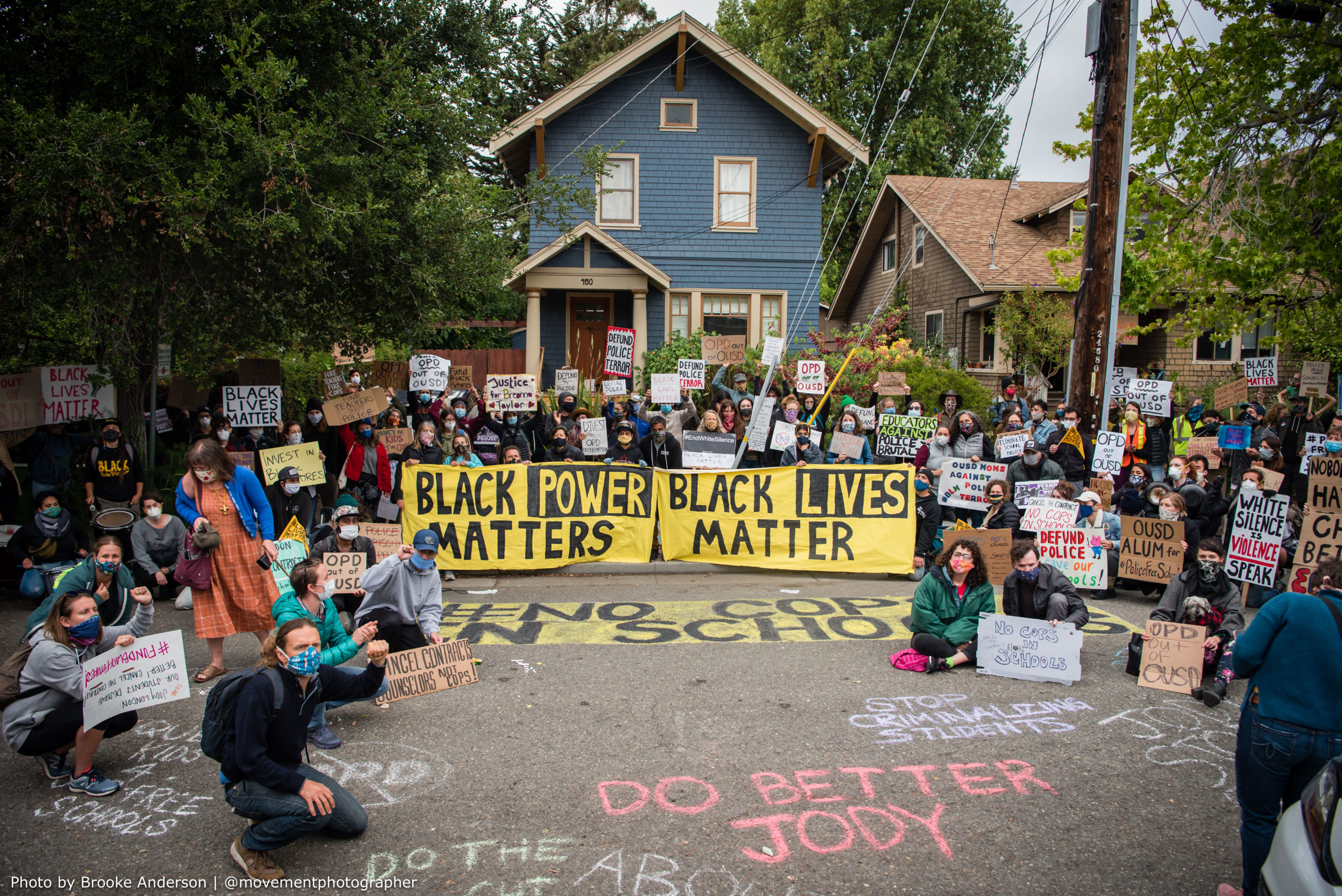 But in nearby West Contra Costa Unified, the five-member board voted unanimously on Wednesday to cancel the district’s contracts with local police departments for school resource officers, or campus police. Oakland Unified has its own in-house police force, while West Contra Costa pays local police to patrol its campuses.

In Oakland Unified, board member Roseann Torres introduced “The George Floyd Resolution to Eliminate Oakland Schools Police Department,” which was also backed by board member Shanthi Gonzales and dozens of speakers who called into the virtual meeting, along with about 500 participants watching on Zoom. It would shift about $2.5 million spent on 10 sworn officers and police administrators to instead pay for student support services such as counselors and coordinators for “restorative justice,” which is an alternative form of conflict resolution that allows students to make amends for wronging others through discussions.

The board did not discuss the resolution, but did respond to reports by board president Jody London and Superintendent Kyla Johnson-Trammell, in which both leaders said they want to work toward a plan to operate safely with no district police.

To accomplish that, the district must negotiate the end of a contract with the officers that extends through June 2022. Johnson-Trammell said she didn’t realistically think the police force would be out of the district until at least the end of December.

“I am recommending that we move forward to create a districtwide safety plan to ensure safe, healthy, and positive school environments for students and adults without a school district police department,” Johnson-Trammell said. “Together, we can reimagine how to keep our schools safe, healthy and welcoming in a way that builds on our strong restorative justice roots, strong foundation of community schools, and critical partnerships throughout the city to protect our students’ physical safety.”

She said the district’s police chief also supports this idea, but that she was not prepared to complete the plan until the end of December and that it was contingent on negotiations with labor unions that represent officers and administrators.

Torres’ resolution calls for Johnson-Trammell to begin the planning process by July 17 and to eliminate the police force by the time school starts on Aug. 10 or as soon as possible after. But Johnson-Trammell said she doesn’t realistically believe she can start the planning process until late August or to “move away” from an in-house police force until the end of December.

Instead, she said she needs to focus her attention first on planning for reopening schools.

“We’re in the middle of a local health pandemic,” she said. “I do believe right now the prime focus needs to be on how we’re returning to schools and what that’s going to look like.”

Board member Gary Yee said he supported Johnson-Trammell’s vision and wanted to ensure that the planning process would result in an “implementation strategy that’s not just symbolic, but will actually help interrupt the racism we have seen” while also supporting students’ access to high quality education, restorative justice, and positive behavior programs.

Board member James Harris told Johnson-Trammell that he supported the “bold step” she was taking, while noting that some black children can be “triggered” by police officers based on negative memories. But he also stressed the importance of the entire board and superintendent uniting around the plan.

“This has to be about all eight of us together,” he said, adding that the district should also work with the city and other community partners to develop alternative strategies for student and staff safety. 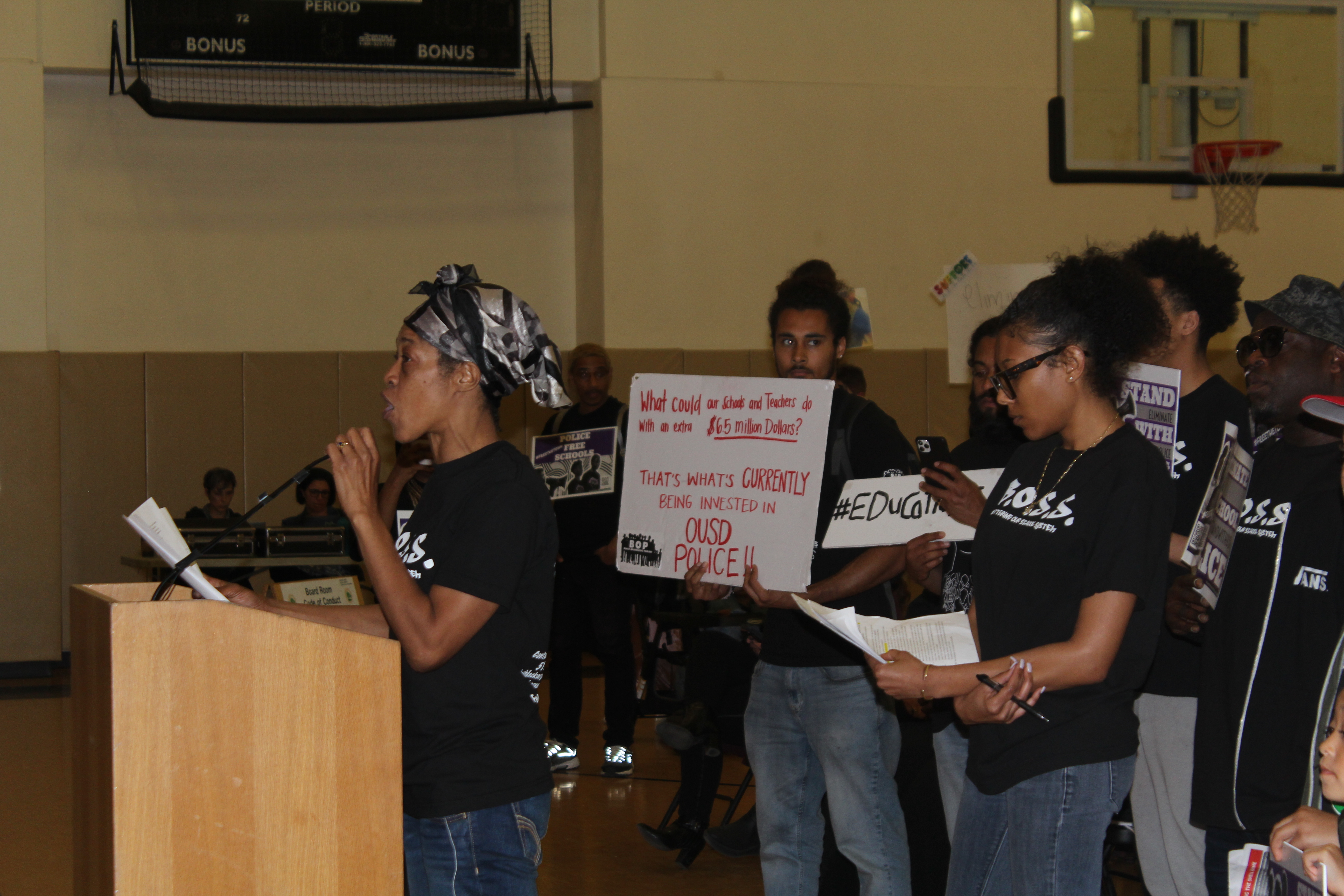 Board member Aimee Eng expressed some concerns about pushing back a September deadline the board had given to Johnson-Trammell in March for a safety plan, saying she wanted the next school year to be a time of transition. Eng said she hoped that plans for reopening schools could include planning for students’ academic, social and emotional, and safety needs.

Board member Jumoke Hinton Hodge was the only member of the seven-member board who did not say whether or not she would support the plan. She pointed out that delaying the implementation would mean less money for the other services called for in the resolution.

Torres’ resolution is based on a plan developed by a community organization called the Black Organizing Project, which suggests that the positions of about 60 non-sworn campus security officers that currently work in the police department be replaced by “peace-keepers.” Torres told EdSource the current campus security officers would be able to re-apply for the new positions.

Johnson-Trammell said she couldn’t speculate about how different positions might be repurposed without negotiating with the union that represents the campus security officers. Unlike police, the security officers do not carry a gun and do not have the authority to charge or arrest.  Torres, however, said that if the board adopts the resolution, staff would be required to implement the new policy.

“When the board votes, it is then executed and that is final,” she said. “This isn’t about renegotiating. This is about a department being eliminated. I want to make sure that’s abundantly clear.”

But Janell Hampton, labor representative for the California School Employees Association that represents the seven sworn officers, said their contract extends through June 2022. The officers see themselves as “a valuable part” of the district and  want to meet with the superintendent “at the table” to share their vision for prioritizing students’ safety and and help come up with “a great plan,” she said.

Keith Brown, president of the Oakland Education Association teachers’ union urged the board to show “courageous leadership” to “end the school to prison pipeline.”  “Black lives matter in school is not a slogan. We must make that a reality.”

Lee Thomas, who represents the administrators union that includes police leadership, said his membership was not 100% in agreement on the resolution. He said some members had safety concerns about what might happen in an emergency if the district did not have campus police and staff or students needed to rely on city police to respond. He cautioned the board not to add new responsibilities to principals as they are transitioning to new educational models when schools reopen.

In West Contra Costa Unified, activists have been calling on the district to dismantle its school resource officer program for years; the teachers union, the United Teachers of Richmond, issued a statement Tuesday urging the district to use the $1.5 million it had budgeted in 2020-2021 for school resource officer contracts to instead be used on  to fund programs specifically for African American students.

Though the proposal was not on the agenda for Wednesday night’s meeting, a resolution was put forth “Condemning Police Violence and Brutality Against People of Color.” More than 25 parents, students, teachers and alumni spoke in response to the resolution, calling on school board members to take the symbolic resolution a step further, and rid the district of armed police officers.

Samone Anderson, a recent Kennedy High graduate who is currently studying at UCLA, said at the meeting that she witnessed her high school friends “beaten, tazed, slammed against lockers, thrown to the ground, put in chokeholds and handcuffed,” by school resource officers.

“Innocent kids are being policed, brutalized and violated in a place that’s supposed to keep us safe, instead we’re being treated like criminals,” Anderson said “…police in our school districts perpetuate an oppressive system that limits the achievement of our black students.”

School board member Valerie Cuevas added an amendment to the resolution canceling the district’s contracts with those police departments until issues of police brutality and institutionalized racism are “adequately addressed.” Though school board member Mister Phillips had suggested that the proposal be brought up at a separate meeting in order to provide the opportunity for the public to comment, the board unanimously voted in favor of Cuevas’ amendment.

Later on in the meeting, during a discussion of the 2020-2021 school year budget, school board members voted to allocate the $1.5 million that had been budgeted for campus police contracts towards African American student achievement programs.

“The presence of armed police officers is detrimental to the healthy development of black and brown youth in our schools,” Cuevas said at the meeting. “And the reason why is because those racist overtones, that excessive force, and those militarized police practices can in fact end up in our schools as a result of the institutions not having addressed these issues historically over generations.”