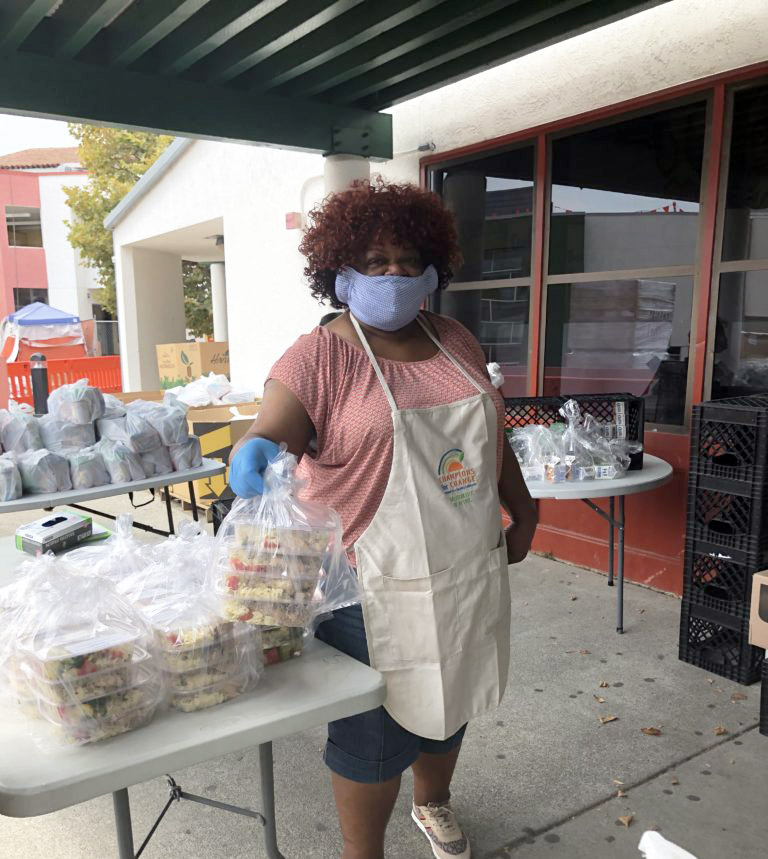 Millions of students and families in California and nationwide who have come to rely on free grab-and-go meals during the past five months of the pandemic may no longer qualify for the food service.

Since the start of the Covid-19 closures, school districts have served millions of packaged meals at no cost and without eligibility requirements to all children at food distribution sites made possible by a series of federal waivers, the latest being the “Seamless Summer Option.” Some districts, such as Los Angeles and Fresno Unified, even kicked in money from their general funds to also feed adults.

But the U.S. Department of Agriculture, at the start of the new school year returned to its pre-Covid rules — only reimbursing districts for meals served to children who qualify for free and reduced-price breakfast and lunch. Though districts will continue serving grab-and-go meals, they will have to charge students who don’t qualify for the federal program. They also can no longer serve children who attend schools in other districts or who attend charter or private schools.

The federal rules changes created a logistical nightmare for the Fresno Unified School District, said Chief Operating Officer Karin Temple. The district served 18,000 to 21,000 meals a day over the summer, and not having to check people’s eligibility made the process run smoothly, she said. She fears the tighter requirements will turn people away.

“When we’re serving the volume that we’re serving, it will really slow things down, and we don’t want to do anything that will discourage people from getting the food they need,” Temple said.

The changes have further complicated a food distribution effort that must now serve students who are attending school virtually but still needing to eat breakfast and lunch during the day. The wildfires in Northern California also have disrupted food distributions in school districts, such as at West Contra Costa Unified in the East Bay, which postponed its meal distribution earlier in the week in an effort to shield employees from the worsening air quality.

Oakland mother Veronica Orozco received food all summer from the Oakland Unified School District for her daughters, 9 and 14, who attend charter schools. She said the meals were helpful to her and other parents she knows during this time of uncertainty.

“I think people are scared. There are a lot of people without money or income,” Orozco said. “We were told children would be eating more since they are home all day, and many parents do need it. I know some parents who have asked where they can get food, and there are many who don’t have enough for food after paying for rent and bills.”

At a recent food distribution at Oakland Unified’s Fremont High School, a mother attempting to pick up food for her children first had to confirm their enrollment status per the new federal rules. Struggling with English, the mother tried to give her children’s names to the food service staff, who couldn’t find them in the district’s electronic system. When the staff determined that the students attended charter schools, they reluctantly had to deny her the meals, though she was able to take some produce from the Alameda County Community Food Bank.

San Francisco Unified recently announced a plan to offer students who don’t qualify for free food weekly to-go bags of five days’ worth of breakfast, lunch, supper — cereal, muffins, pupusas, pizza and burritos, fresh fruit and vegetables and milk — for $22. The meals will be available only to district students, who display a barcode identifying them as qualifying for the free food and proving that they attend a school in the district.

“We are not in a different situation now than we were in May,” said San Francisco Unified Student Nutrition Services spokesperson Anne Moertel referring to a time when all students could receive free food. “We have more families that are out of work that are food insecure. Our hopes are that our policymakers will recognize that this is an essential need and that feeding children is not negotiable.”

A recently introduced bill in the House of Representatives aims to open school lunch programs to all children regardless of school enrollment or income and without the need to check ID or proof of enrollment.

California school districts don’t have time to wait and see if Congress will pass the bill, known as the Pandemic Child Hunger Prevention Act, officials said. They are continuing to offer grab-and-go meals, though some districts are changing their number of pickup sites or their distribution method to follow the new rules.

The bill was introduced by House Education and Labor Committee Chairman Robert C. “Bobby” Scott (D-Va.) who with other lawmakers is also calling on USDA to extend the waivers through the next school year. USDA Secretary Sonny Perdue said the department lacks congressional approval and funding.

West Contra Costa Unified is incorporating lunch breaks into its virtual instruction schedules by designating a 40-minute lunch break for both teachers and students during its 10 a.m.- 3 p.m. instructional day. The district is serving grab-and-go meals at 15 of its schools on Tuesdays and Thursdays, so that parents can pick up multiple meals for the week for their children.

Mark Chavez, nutrition services director at Long Beach Unified, said the USDA’s new rules make it harder on parents who have children at different schools, since the district can serve grab-and-go meals only at their “school of attendance.”

“It may take you 20, 30 minutes to get one meal then you have to add that to the next school to pick up another meal,” Chavez said, adding that the district is working to figure out a way around these rules so that parents can pick up meals at whichever school is closest to them.

But advocates of the school lunch program say there are other problems too. One indicator surfaced in the Bay Area last summer when BayAreaCommunity, (BAC), a volunteer organization that mapped school meal sites across 14 Northern California counties, found that 720 meal sites in the spring dropped to 300 by late summer for multiple reasons, among them lower demand. San Francisco Unified, which served 150,000 meals per week in May, dropped to 120,000 in early June.

June Richardson, a nutritional consultant working with Ravenswood Schools, attributed the summer dip in demand to families preferring to be able to purchase their own food through the Pandemic-EBT food stamp program, as well as families tiring of the limited food options.

“Because we are prioritizing food safety in distribution of food, the menu is limited and mostly individually wrapped,” Richardson said. “We are trying our best to package up bulk items like chicken nuggets, providing ingredients for families to cook — for example, spaghetti. But the monotony and limited menu choices also play a role.”

Some attributed the drop to distribution hours that didn’t mesh with working parents’ schedules, leading some districts to make changes.

Hope Brand, Director of Food Service at Linden Unified School District in Stockton, said the district closed its summer meal pick-ups at the end of June because they could not afford the additional staff and protective equipment needed to follow safety protocols. It recently resumed as a “drive-thru meal service” — parents can pick up both breakfast and lunch for their children between 7 a.m. and 8 p.m. at their school of attendance.

As the pandemic grinds on and the unemployment rate climbs higher than the highest point during the Great Recession, advocates say the need for school-based food distribution will only increase. Families seeking food help through the GetCalFresh.org portal increased by 750,000 households including 400,000 school-age children between March 15 — when shelter in place orders started across California — and Aug. 17.

Another indicator of need is the latest data reported by the Stanford Data Lab from the U.S. Census Bureau’s “Household Pulse Survey” — a series of weekly surveys gauging the pandemic’s impact — more than 1 million California children were reported to not have enough food the week of July 21. That number has risen steadily since early May, when it was 8.6% — or 749,000 children.

The Los Angeles Unified School District, the largest in the state, distributed more than 50 million meals since March and will continue to provide food to all children and adults who show up at its distribution sites. It has used an estimated $78 million in federal CARES Act funding and is seeking other funding from the Federal Emergency Management Agency.

Other districts are also struggling to fund their nutrition programs, which were operating at a deficit pre-Covid, and have found that serving grab-and-go meals is more expensive than traditional school meals because of the costs of extra packaging and precautions.

To help districts serve grab-and-go meals during the fall, the state allocated nearly $112 million in the state’s 2020-21 budget. An additional $80 million is included in a final budget bill pending in the legislature.

Fresno Unified is calling on the City of Fresno to allocate federal stimulus funds from the federal CARES Act to help it pay for grab-and-go meals for both adults and children, Temple said. More than 87% of the district’s enrollment — 64,134 students — qualified for free and reduced-price meals in 2019-2020.

“There is significant need in our community; with such high rates of disadvantaged students we feel like it’s so important that we provide access to meals,” Temple said. “It’s one of the focal points for continuing to serve our community during this Covid situation.”

Joyce Kasing Tagal was a lead organizer of the project that mapped all food sites in the Bay Area with Big Local News, a project of Stanford University. Samuel Baucom, a staff journalist for Big Local News, contributed to this report.