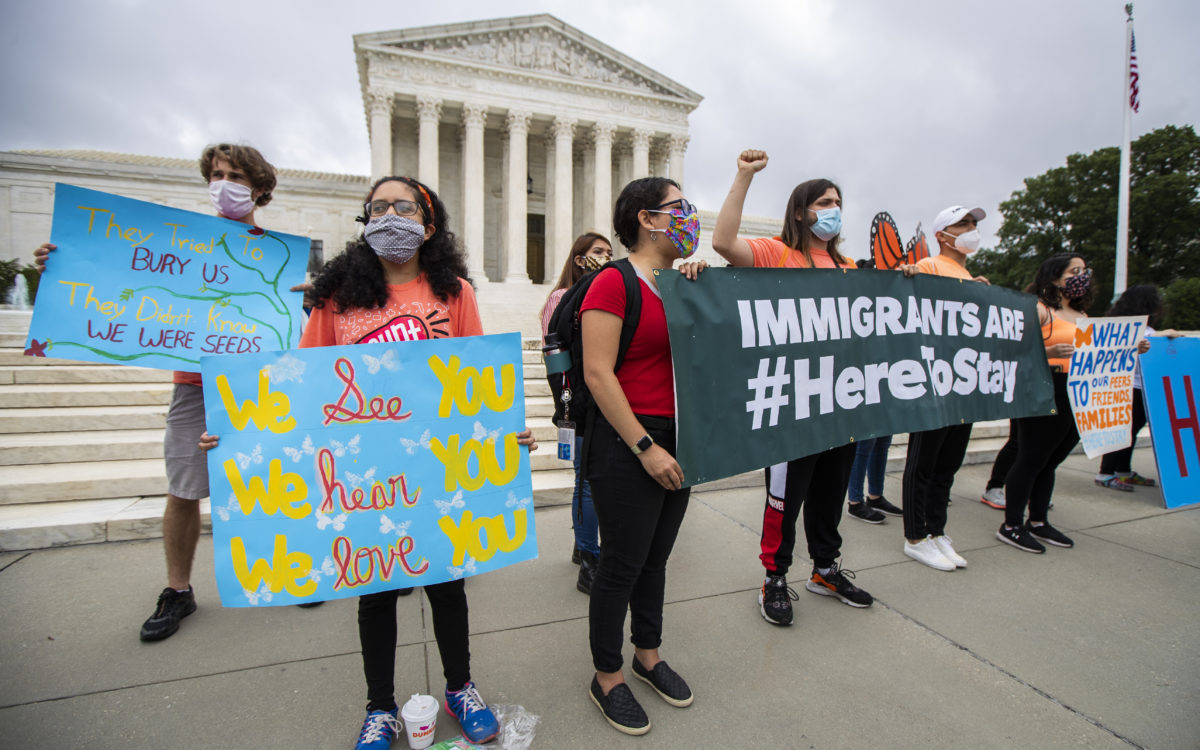 Hundreds of thousands of “Dreamers” are breathing a sigh of relief, after a Supreme Court decision allows them to continue to work and be protected from deportation.

The Supreme Court voted 5-4, with the four liberal justices and Chief Justice John Roberts saying that the decision to end Deferred Action for Childhood Arrivals, or DACA, was “arbitrary and capricious.”

For DACA recipients who have been on edge for months, the decision is huge.

“I’m happy. This is a huge victory,” said Miriam González Ávila, a middle school teacher from Los Angeles and one of the plaintiffs who sued to keep DACA in place. “I think when I first saw the initial decision, I was like, ‘Am I reading what I think I’m reading?’”

There are an estimated 4,000 teachers in California with DACA status, according to the Migration Policy Institute. González Ávila said she hopes some of her students who are undocumented will be able to apply for the program.

DACA, which began in 2012, currently provides temporary protection from deportation and permission to work for close to 700,000 people who came to the U.S. as children, according to the most recent data from U.S. Citizenship and Immigration Services. About 200,000 DACA recipients live in California, by far the largest number of any state, according to the Migration Policy Institute.

After the Trump administration announced a decision to end the protection in 2017, the University of California and the state of California both sued to keep it in place, in addition to several DACA recipients, including González Ávila. Several lower courts upheld the lawsuits before they were eventually appealed to the Supreme Court, where they were consolidated.

“Today’s Supreme Court decision really is a victory for immigrant youth who fought for decades for a program like DACA to exist,” said Ignacia Rodriguez Kmec, immigration policy advocate for the National Immigration Law Center (NILC), a nonprofit legal organization that represented some of the plaintiffs. “At the same time, we know that the Trump administration still has authority to rescind the DACA program again. What this moment really emphasizes is the need to continue the fight.”

Rodriguez Kmec said current DACA recipients can continue to apply for renewals before their two-year permissions expire. Others may also be able to apply for the first time, which had not been the case since September 2017. However, NILC recommends undocumented immigrants speak with an immigration attorney before applying, because it is unclear if the Trump administration will try to limit that option.

All three public college systems in California applauded the decision. “Justice and the rule of law won the day,” wrote UC President Janet Napolitano in a statement. “The Supreme Court’s decision to uphold the University of California and the California attorney general’s challenge against the Trump administration’s capricious action is a victory for hundreds of thousands of young people who are making vital contributions to their families, schools, employers and the nation.”

“I think they should continue to re-enroll, and re-enroll well in advance of the expiration of their two-year DACA membership,” Napolitano said.

California State University Chancellor Timothy White called the decision “a truly outstanding and welcome outcome,” writing, “Some of the CSU’s brightest students and most dedicated employees are Dreamers, and they are found on each of our 23 campuses.”

California Community Colleges Chancellor Eloy Ortiz Oakley wrote that the Supreme Court decision brings hope to thousands of students. “We will continue to fight for undocumented students and call on Congress to pass permanent protections for these students,” he said.

When President Trump announced his decision to end DACA protections he said the program was “unlawful and unconstitutional and cannot be successfully defended in court.” On Thursday, the president tweeted, without mentioning DACA by name, “These horrible & politically charged decisions coming out of the Supreme Court are shotgun blasts into the face of people that are proud to call themselves Republicans or Conservatives,” and later, “Do you get the impression that the Supreme Court doesn’t like me?”

The decision was celebrated by numerous education organizations and colleges, including the American Council on Education, which represents colleges and universities nationwide; the American Association of State Colleges and Universities and the Association of Public and Land Grant Universities, among others. Austin Beutner, the superintendent of the largest K-12 school district in the state, Los Angeles Unified, applauded the decision and said he would continue to push for comprehensive immigration reform.

“The hundreds of thousands of Dreamers who contribute to all aspects of American life, including education and healthcare, deserve a path to citizenship,” Beutner said.

Plaintiffs and other advocates for immigrant rights also said they will continue to push for immigration reform with a path to citizenship, which DACA does not include.

“While this decision is certainly a win, DACA was never intended to be a long-term solution and the majority of undocumented youth today are not eligible for the protections and opportunities afforded by the DACA program. We urge Congress to pass immigration reform that will enable undocumented youth and their families to thrive in the United States,” wrote Katharine Gin, executive director at Immigrants Rising, a nonprofit organization based in San Francisco that helps undocumented immigrants attend and graduate from college and achieve other career goals.