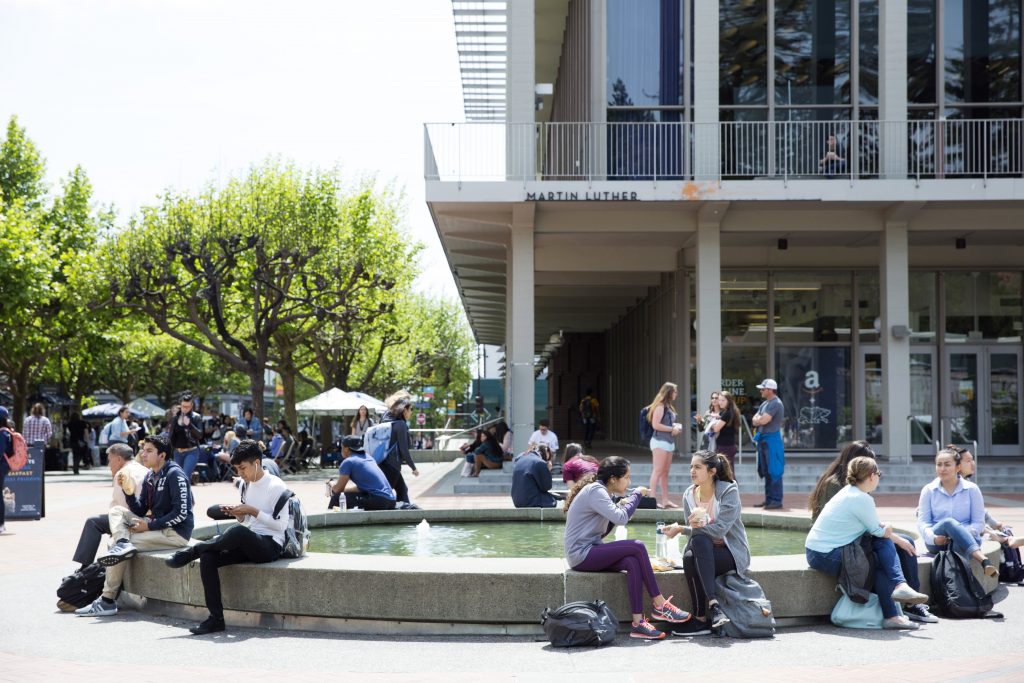 Alison Yin/EdSource
University of California at Berkeley students on campus in front of Martin Luther King, Jr. Student Union before the start of coronavirus pandemic.

Alison Yin/EdSource
University of California at Berkeley students on campus in front of Martin Luther King, Jr. Student Union before the start of coronavirus pandemic.

Black and Latino students are proportionally underrepresented in nearly all of California’s more selective public and private universities, according to a study by the Urban Institute, highlighting the challenges some institutions have had in improving diversity. The report comes just months before voters in November will be asked to reconsider the state’s 1996 ban on affirmative action programs.

The study by the Washington, D.C.-based think tank found racial and ethnic disparities in undergraduate enrollments are striking at institutions in the University of California system compared to, for example, its public counterpart, the California State University system.

For example, at UC San Diego in 2017, 18.4% of students identified as Hispanic in 2017. But the potential market of 18- to 24-year-old Hispanic students statewide for more selective institutions like San Diego is 39.4%. So, Hispanic students were underrepresented by 21 percentage points. For black students on the campus, they were underrepresented by nearly 4 percentage points. Only 1.5% of students on that campus identified as black in 2017.

“It’s a segregation pattern in higher ed,” said Tomas Monarrez, a research associate in the center for education data and policy at the institute and a co-author of the study. There is an overrepresentation of white and Asian students attending “highly selective colleges” that have more funding across the state and nationally, and more representation of Black and Hispanic students at less selective colleges, he said.

The findings mirror the concerns of UC’s Regents, who unanimously supported repealing the state’s Affirmative Action ban, known as Proposition 209, passed in 1996. The repeal effort, now called Assembly Constitutional Amendment 5, will appear on the state’s Nov. 3 ballot. If it passes, race could once again be considered by California’s public universities in hiring, recruiting and admissions.

“The reality is UC has been unable to reflect California’s full diversity in its student body,” according to a statement from the UC Regents.

The degree of diversity found, however, may depend on the methodology used. In determining whether racial groups were under-represented at the more selective, public institutions, the Urban Institute compared the percentage of racial groups at the universities to their percentage in the total California population. But that would include some number of 18-24 year-olds who would not go to college, either because they chose not to, had already entered the job market, or for a variety of other reasons.

“The relevant population are those graduating from high school or enrolled in community college,” said UC President Janet Napolitano.

“Ideally, our student body, while not necessarily a one-to-one match, would come closer to looking like the population of students we should be educating,” she said. “I think that’s a worthy goal for a public university. We have a list of 14 factors in admissions and it does seem artificial when the only factor you can’t consider is race, ethnicity or gender, as if those have nothing to do with a student.”

Although the California State University system is more representative of the state’s diverse student population than UC, Chancellor Tim White said more could be done.

“The CSU takes great pride in the fact that our student body largely reflects the dynamic diversity of our state; we know that we could do more, particularly for African American students, if Prop 209 prohibitions were no longer in place,” he said.

The Urban Institute researchers analyzed the racial demographics of most public and private, two- and four-year colleges in the country using federal enrollment data from 2009 to 2017. They then compared each college to the racial composition of 18- to 24-year-olds in each institutions’ college market using census data. For rating colleges, the researchers used the Carnegie classification system, which has sorted colleges into “more selective” or “less selective” categories since the 1970s based on the standardized test scores of admitted students.

For more selective public universities (see box), the college market is considered to be all of California, not just the local community. That’s because those institutions tend to draw students from around the state, not to mention the nation and the world. At UC Berkeley in 2017, 15.4% of students identified themselves as Hispanic. But the potential market of 18- to 24-year-old Hispanic students statewide for more selective institutions like Berkeley is 39.4%. So, Hispanic students are underrepresented on the Berkeley campus by 24 percentage points.

For less selective colleges, the researchers used data on commuting distance from the National Postsecondary Student Aid Study conducted by the National Center for Education Statistics to determine those institutions’ markets. That study defined the distance from home that students are typically willing to travel to attend each college.

Brian Haynes, vice-chancellor of student affairs on the Riverside campus, said the university’s Chicano studies and African studies programs work directly with their admissions office. Both programs help identify prospective Latino and Black students and make sure they complete their applications, he said. Both programs are an essential part of the university’s orientation days.

After Prop 209 went into effect, the state’s universities attempted to increase diversity by boosting admissions of qualified students from low-income families, or students who were the first in their families to attend college. But opportunity gaps based on race remain, UC Chancellor White said, in a letter to the Assembly last month.

“Regrettably many proven strategies to improve educational equity and completion outcomes are directly prohibited by Prop 209,” he said, referring to student recruitment, scholarship programs and teacher candidate programs based on race and ethnicity.

The UC system also attempted to mitigate the effects of Prop 209. Those efforts included expanding programs that provide additional support to first-generation and low-income students. UC also guaranteed admission to students in the top 9% of their high school graduating class, as long as their school participated in the programs.

Despite those changes and others, the proportion of freshmen from underrepresented racial groups, including Blacks, Latinos and women, attending the UC campuses, averaged 20% before Prop 209, then dropped to 15% in 1998, then slowly increased over the next 20 years, reaching a peak of 37% in 2016, according to the system. However, the percentage of underrepresented students graduating from high school had doubled to over 56% by 2016.

“We know attending these more selective institutions has a strong effect on people’s lives after college,” Monarrez said. Graduates’ job opportunities and their ability to enter positions of power, like government, often correlate to whether they attended an elite institution, he said.

Monarrez said, the research shows there is not a supply problem of qualified Black and Latino students who could attend these universities based on the demographics of the potential students within each colleges’ market.

Less selective colleges like CSU Dominguez Hills generally have better racial representation compared with the more selective, Monarrez said. Many colleges, have moved toward a more holistic view of potential students that evaluates their backgrounds and extracurricular activities for admissions and recruitment, he said. UC campuses take this holistic approach.

And standardized admissions tests like the SAT, which attempt to measure college readiness have come into question for racial biases.

For several reasons, high-achieving, often low-income, and Black or Latino students don’t apply to or are not interested in applying to top-tier universities that are very selective. In academic circles, the concept is known as “undermatching.” The reasons they don’t apply include inadequate counseling in high school, affordability concerns, or students’ perceptions about how welcoming campuses may be to people from first-generation, low-income or minority backgrounds, Monarrez said.

A high-achieving Black student, for example, may never consider UC Berkeley as an option because there are fewer other Black students on the campus. They may be unable to afford the application fee, or they may not know about their options to make the campus affordable because the university isn’t recruiting in their high school.

“Black and Hispanic students are smart enough to attend top universities,” Monarrez said. “Either they’re simply not applying, or they’re not drawn to them because of a toxic environment. There are a lot of ways these universities could do more to reach out to disadvantaged communities.”

Haynes, who said he’s worked at seven college campuses nationally, including Riverside, said undermatching is a “serious problem across the country,” and it remains a challenge.

“It starts in middle school,” he said. Too many middle and high schools don’t positively reinforce that their low-income or minority students can succeed in top-tier universities.