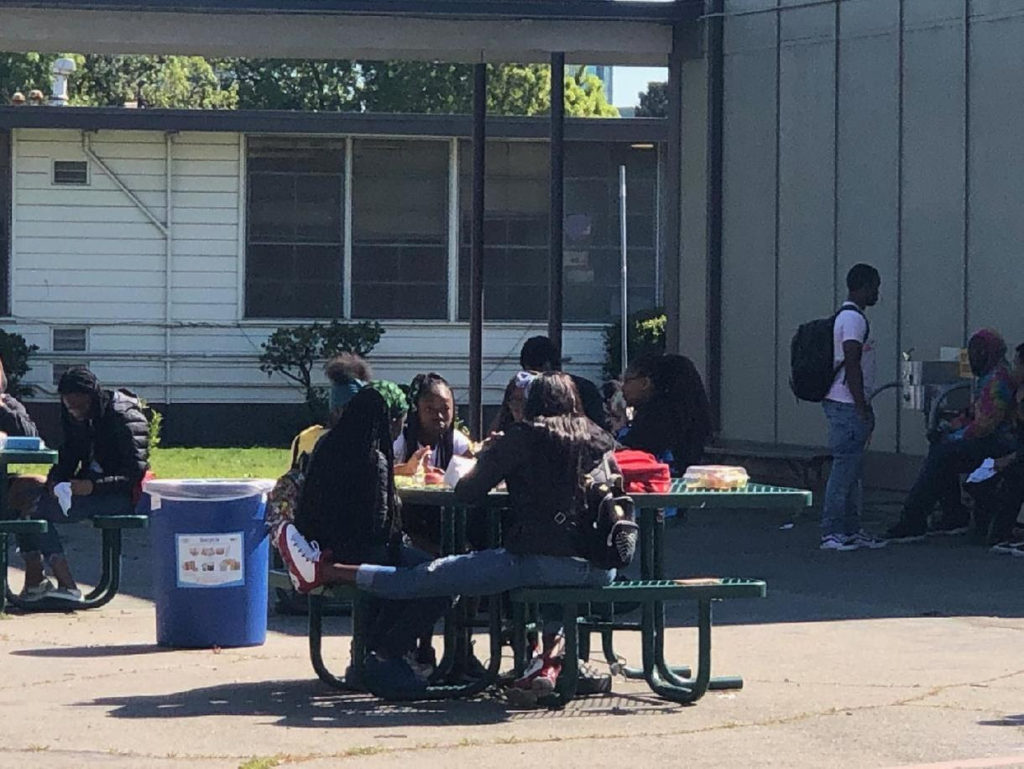 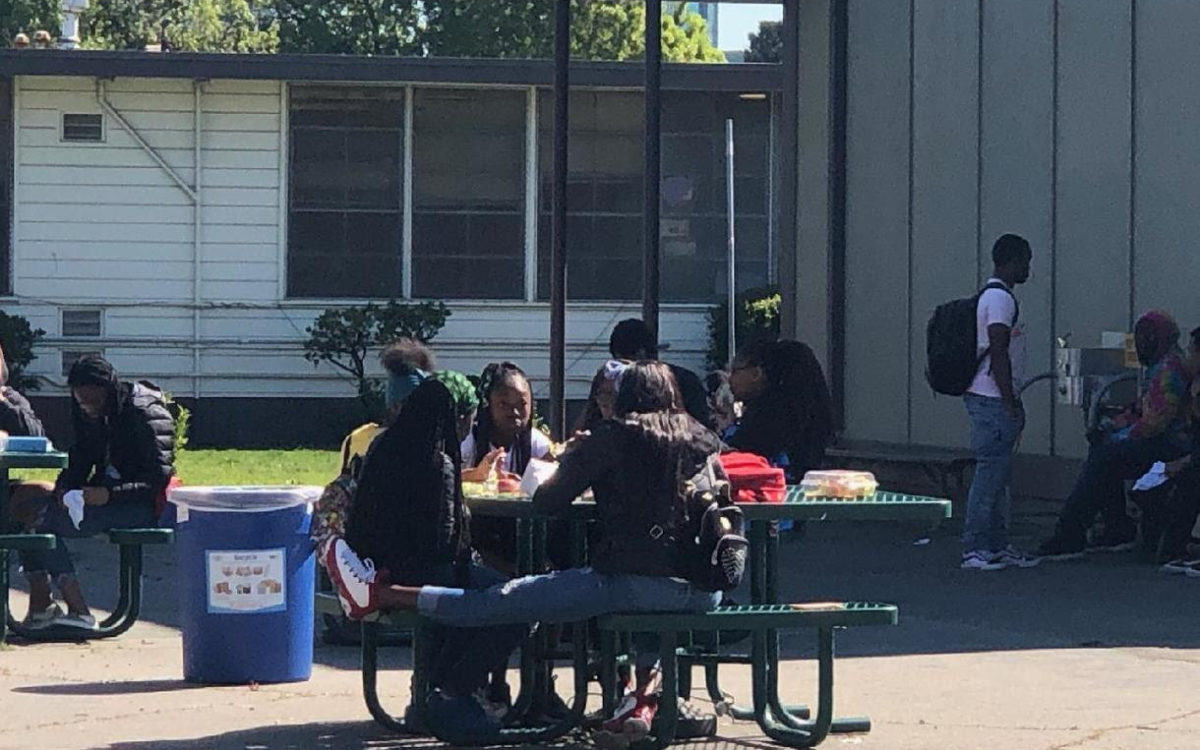 McClymonds students having lunch March 3 at Ralph Bunche Academy, where they will be attending until authorities declare that the air at McClymonds is safe. (Courtesy of Oakland Unified School District)

McClymonds students having lunch March 3 at Ralph Bunche Academy, where they will be attending until authorities declare that the air at McClymonds is safe. (Courtesy of Oakland Unified School District)

McClymonds HIgh Schools students were reunited with classmates Tuesday as air testing continues to determine whether the West Oakland school is safe to reopen.

The school, closed on Feb 20 after trichloroethylene — or TCE , a cancer-causing chemical was found in groundwater, is not expected to reopen until at least the week of March 9 after it gets an official clearance that the air is safe. In the meantime, all of the high school students will attend Ralphe J. Bunche Academy.

“It looks like we won’t reopen until the week of March 9 at the earliest,” Oakland Unified spokesman John Sasaki told EdSource. He said authorities finished collecting air samples on Friday and submitted them to a lab for analyzing. A back up at the lab has delayed an official decision on whether there is TCE in the air.

Preliminary test results have shown no TCE in the air, authorities said.

Trichloroethylene , an organic chemical, is used in dry cleaning and degreasing metal and as a solvent for oils and resins. According to the National Institutes of Health, it has been shown to cause liver and kidney cancer in experimental animals.

The school has been closed since Feb. 20 following the discovery of TCE in the school’s groundwater on Feb. 14 while investigating whether there was a leak in an underground petroleum tank that was removed years ago from underneath the campus.  Parents and others have expressed concern over the decision to delay the school’s closing which the district said occurred because they didn’t have enough information on whether students were at risk.

“I am truly sorry for the worry and anxiety that McClymonds’ students and families have felt and the disruption to their lives and routines,” wrote Oakland Superintendent Kyla Johnson-Trammell in a newsletter Thursday afternoon. “We are doing everything we can to ensure a safe and healthy school environment for our students that we reopen as soon as possible.”

Johnson-Trammell also addressed charges of environmental racism raised by persons who attended a district briefing Feb. 24 at West Oakland Middle School that was closed to the press.  Shouting could be heard from outside, and some parents said they were frustrated as they exited.  About 50 people attended with many directing their comments at officials from the district, the Alameda County Department of Environmental Health and the California Department of Toxic Substances Control over what they saw as both a lack of information and a lack of action.

“Unfortunately, this story is all too familiar to our students of color living in poverty,” wrote Johnson-Trammell. “They–and generations of their families–have borne the brunt of racist environmental policies and practices that have put their health and lives in jeopardy.”

The prevalence of toxic substances in groundwater is nothing new in West Oakland, which has historically been a mix of industry and homes. School board member Jumoke Hinton Hodge, whose district encompases McClymonds High School, said parents’ anger was directed at “systems” of government that they believe have failed them in allowing the toxic substances to remain.

“People are upset about environmental racism in West Oakland, and I think there’s a consciousness that’s waking up,” Hinton Hodge said in an interview after the evening meeting. “…I think black and brown and poor folks for the most part are not feeling like these are systems that work for them, regardless of the fact that they pay their tax dollars and regardless of the fact that they for generations have gone to these schools, they’re not always being served the way they feel they need to be served.”

Last week, while classes were taught at the alternative locations, groups of students were taken on field trips to UC Berkeley, the De Young Museum in San Francisco and other locations, Sasaki said.

McClymonds seniors Angel Diamond and Claryce Jefferson left the Feb. 24 meeting saying that they did not get the information they wanted.  They said the closure couldn’t come at a more inconvenient time for them. They have both been accepted to several universities, and said they should be conferring with college counselors to help pick the best school for them and apply for scholarships. The school closure has halted the process, they said. The closure is also leaving them with less time to do their senior projects, they said.

“You can’t send transcripts without the school officials, we can’t even get into the school, and half of our (senior project) work is in our lockers,” Jefferson told EdSource.

Anita Moore, whose nephews attend McClymonds, said she was frustrated that she had to drop them off at different locations since one is a senior and the other is a junior.

“I hope that (the district) is feeling the impact this is having on everybody,” Moore said. “..I have a car, but others don’t, and this is a big inconvenience for a lot of people.”

District officials explained at the meetings that the sites were selected intentionally, focusing on the “culture” of the freshmen, Hinton Hodge said. Officials wanted freshmen to go to Ralph J. Bunche Academy — an alternative high school — so that they could be around older students and be reminded of the high school-level academic expectations, she said. Seniors were assigned to Westlake Middle School since it was the furthest available school, and they are better prepared to travel further away, she said. The other students are going to West Oakland Middle School since it’s close by.

Authorities from the Alameda County Department of Environmental Health and the California Department of Toxic Substances Control explained at the meetings that air testing conducted Feb. 22nd and Feb. 23 at West Oakland’s McClymonds High School showed no signs that the chemical vaporized into the air on campus.

Air samples were taken from around 50 locations throughout the campus, including every classroom, over the weekend, district officials said. Glass syringes were used to collect the samples which were fed into specialized equipment that show almost immediately whether there is TCE in the air. The samples showed zero percent levels of TCE.

Before authorities can say for certain whether the air is free of TCE, the samples must be analyzed in a laboratory, said Department of Toxic Substances Control engineer Cheryl Powell in the news release. Powell said she is hopeful that the lab tests will confirm that the chemical is not in the air in the school.

“We don’t have the same level of scrutiny on this field screening method, but when it’s compared to analytical laboratories, it always compares well,” Powell said.

Authorities have not yet determined where the TCE in the groundwater came from, though they believe it came from somewhere near the McClymonds campus.

Alameda County Department of Environmental Health Land Water Division chief Dilan Roe told EdSource that it’s possible authorities will never find out where the TCE came from — TCE has been detected at various sites throughout the neighborhood.

TCE was commonly used as a degreaser, said John Karachewski — one of the engineering geologists from the Department of Toxic Substances Control who spoke at Monday’s meetings. It was used at former metal plating shops near McClymonds, and a Department of Toxic Substances Control-led groundwater cleanup effort has been underway for years at the nearby site of the former Lane Metal Finishers.

The groundwater at the Lane Metal Finishers site flows away from the school, however, so it may not be the culprit, Karachewski said.