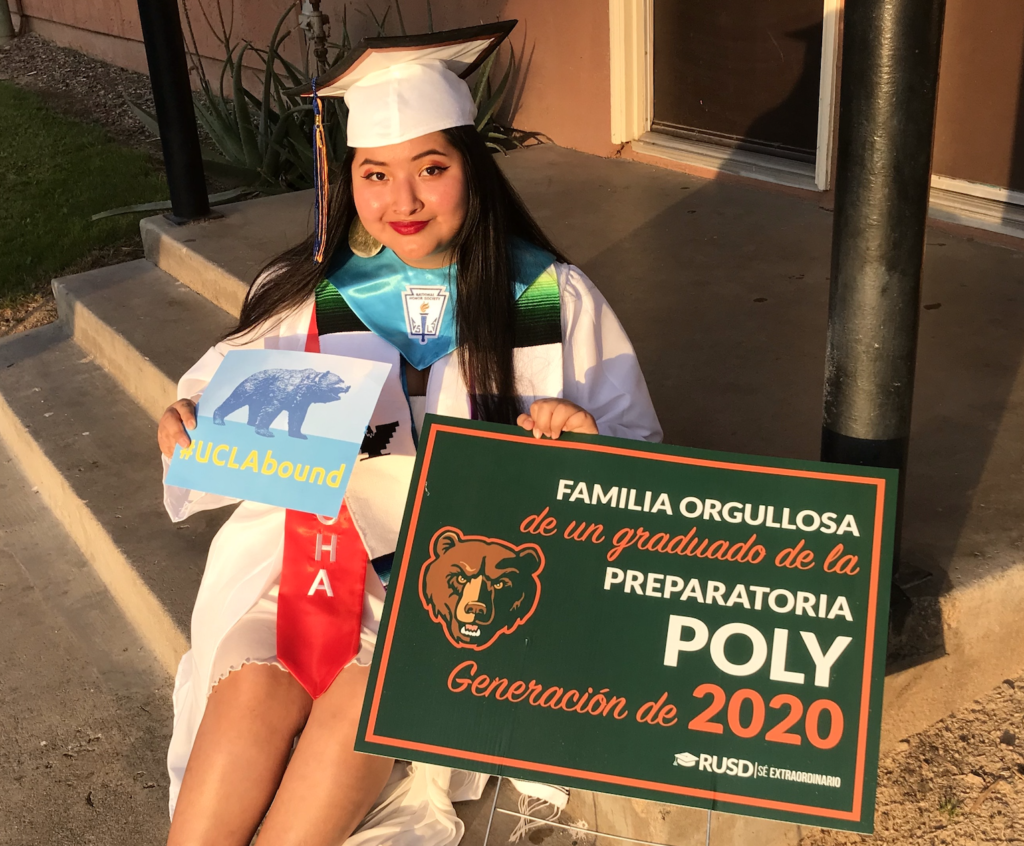 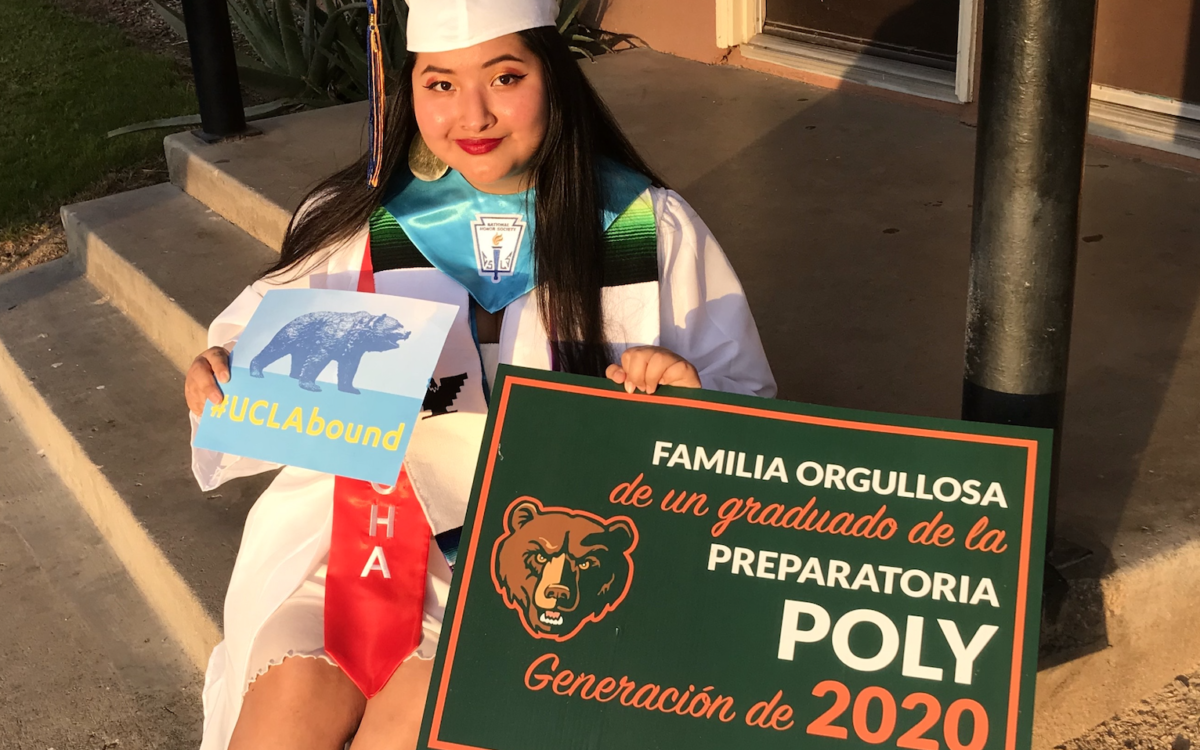 As they approached a traffic checkpoint in Long Beach, close to their home, Johana Resendiz, then 7 years old, didn’t realize her life was about to change.

She and her younger sister were riding with her father, a U.S. resident and passed through easily. Her mother, who drove behind in a second car, was undocumented and facing an order of deportation. She was immediately arrested and deported within a month.

Johana is now 18, and will attend UCLA this year, where she will study biology and Chicano/Chicana studies. She is one of the 36% of Latino students admitted to the UC system, the first time that Latinos make up the largest ethnic group of admitted freshmen. Her story illustrates the difficult journey that some Latino students have had to take to be admitted to one of California’s flagship universities.

She plans on eventually going to medical school to become a doctor, a goal she decided on during her junior year of high school after realizing she loved her AP Biology class.

But graduating from high school and starting college — whether in person or via distance learning — in the midst of a pandemic is hardly the most difficult transition she’s experienced.

Her high school graduation cap read “From the streets of Tijuana to the classes of UCLA” to honor the time in seventh grade that she spent commuting from Tijuana to San Diego County to attend school. Then there was the time in third grade when her family lost their apartment and stayed in a friend’s home and motels. The rest of her elementary and middle school years were just as traumatic.

“All I can think about when I study — I also think about the money — but I think about my future children and how I want to give them a better life than I have had,” said Johana. “I just want to make sure that everybody in my family, when I’m older, doesn’t have to experience homelessness or poverty.”

Her mother’s deportation was “when it all started,” she said. It ushered in a new life of constantly moving and economic instability.

Her family had already been struggling financially. Her father, injured on the job when she was very young, was getting a fixed disability income by that point. Her mother’s income from cleaning homes and motels evaporated when she was deported.

Within about a month of that day at the checkpoint, Johana, her sister and her father had moved to Mexico City to join the mother in her hometown.

The instability followed her throughout elementary school: Mexico City for a few months, back to Riverside without her mother for several more months, Long Beach for about two years. Each time, they moved because they couldn’t afford the rent.

She was in fourth grade and in Long Beach, where she was born, when they lost their apartment. Suddenly homeless, they stayed in motels and in a friend’s home, where each night they slept on the living room floor and her dad slept in his car due to lack of space, for the next few months.

“I really remember that vividly,” she said. “It definitely stays with me.”

“I think part of what has kept her in the struggle to change her life is the poverty that she has lived,” said her father, Gabino Resendiz, in Spanish. “Because I’ll tell her: ‘We don’t have enough right now. But perhaps if you study and you keep on going, maybe one day you’ll be someone and you’ll have what you’re missing out on right now.’”

By the time she was in the fifth grade, they had moved to San Ysidro, a U.S. city along the San Diego/Mexico border, to be closer to her mother who had moved to Tijuana to be near her family. But by seventh grade they could no longer afford that apartment. Her parents decided to move the entire family to Tijuana, the first time in years that they had lived in the same home.

She now had to wake up at 4 a.m. every school day to take several buses that would eventually drop her and her 11-year-old sister off at the border bridge by 6 a.m. where she had to wait in line to enter the U.S. The girls would then take a trolley to her sister’s campus which was just one stop before hers. Most of the time, her father accompanied them, but there was a period of several months when they had to make the journey on their own.

“Waking up at 4 a.m.…to go to school is truly an achievement,” said her father. “As an adult, you run, you jump, you do whatever you need to do. But for her, as a small girl, that was tough.”

It was during one of the journeys across the border that she met the librarian from San Ysidro Middle School, her school at the time. If the librarian was further ahead in line at the border crossing on any given day, she would call Johana and her sister to join her. It was a small yet meaningful action, because it helped Johana get to school on time.

The final move came after a year of daily border crossings. With her father and sister, she moved to Riverside, where an aunt lived. That’s where she lives today and where she has been able to settle down for the longest period in her life.

She credits her father with having the greatest impact on her life.

“He raised me,” said Johana. “And even though we were homeless at one point, he still tried his best to keep us safe.”

Once she started at Poly High School in Riverside, her involvement in extracurricular activities increased drastically. She tutored classmates in English, created art pieces to display at her school to raise awareness about human trafficking and joined a leadership program organized by the nonprofit Hispanas Organized for Political Equality. With her 4.0 GPA, she is a member of the National Honor Society and became the president of her campus’ chapter of MeCHA, a nationwide coalition of Latino and Chicano students that promotes access to education and cultural pride.

Riverside is also where she met more of the people she calls angels: Elizabeth Arceo Jimenez, her high school Spanish teacher, who helped her through the depression she experienced in middle school and her freshmen year of high school, and her college counselor, Yuridia Nava, who helped her apply to both UC Berkeley and UCLA.

“Johana has the ability to persist and be passionate about her future despite facing obstacles,” said Nava. “She also has grit. This is something that cannot be taught.”

She was accepted to both but has decided to attend UCLA which is closer to home and in LA, “a city with so much culture” and opportunities.

Although she will be attending classes virtually this fall, she’s excited to learn alongside people who share her interests and her drive. She’s proud to be in UC’s historic class of Latino students.

“I hope that my small story inspires others to move forward with their education,” she said, “because education is the path towards opportunity.”