One incumbent, one newcomer on track to win pivotal school board races in Los Angeles 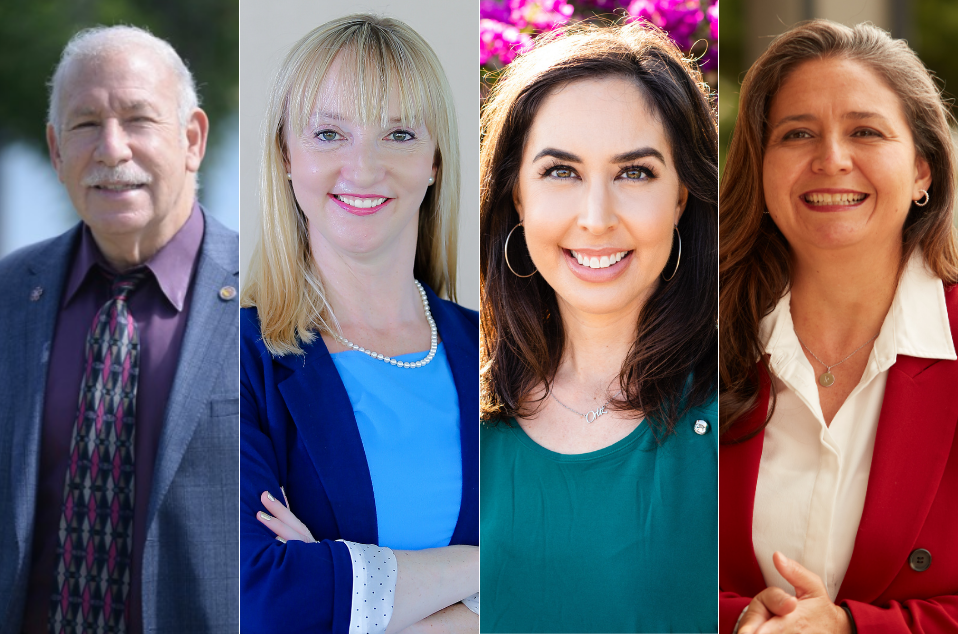 Tanya Ortiz Franklin’s victory would give candidates backed by charter school advocates a slim majority on the board.

Franklin, a former teacher, has earned about 58% of the vote as of Wednesday morning in her race against labor organizer Patricia Castellanos. Castellanos and Franklin are vying to replace school board president Richard Vladovic, who is termed out in District 7, which stretches from South L.A. to the L.A. Harbor.

In District 3, which covers much of the west San Fernando Valley, Schmerelson was winning 54% of the vote, leading challenger Marilyn Koziatek, a staffer at Granada Hills Charter High School.

It’s unclear how many votes are left to be counted, but Los Angeles County Clerk Dean Logan called the results “semi-official.” In District 7, Castellanos conceded on Wednesday but Franklin has yet to declare victory. Schmerelson declared victory in District 3.

It could take several more days to certify the final vote counts. But if the current results hold, Franklin would become the only new member of the school board and take office in December. Along with the six other board members, she would be tasked with helping to guide the district through the ongoing Covid-19 pandemic that has kept school campuses closed since the end of last school year.

Franklin’s victory would also give candidates backed by charter school advocates a slim majority on the board. That could lead to the school board revisiting the district’s recently-adopted policy laying out how it will implement a new law, Assembly Bill 1505, that imposes greater restrictions on charter schools by giving school boards more authority to reject new charter schools and changing the process for renewing existing charter schools. Franklin has said she would want to revisit the policy if elected.

Charter school supporters are dissatisfied with the district’s interpretation of the law, saying it imposes overly burdensome regulations that will make it difficult to open new charter schools and get existing schools renewed. They contested a provision that allows the school board to consider a charter school’s facilities plan when deciding whether to approve a new school or an existing school’s attempt to move to a new location.

Parts of the law are ambiguous and open to interpretation. The law, for example, permits school boards to reject new charter schools if the board finds a school “unlikely to serve the interests of the entire community,” but it is largely up to the school board to decide what makes up a community’s interests.

Charter school advocates spent millions of dollars to support Franklin and Koziatek in the two school board races, far outspending United Teachers Los Angeles, the union representing teachers in the district. The union endorsed Castellanos and Schmerelson. Between the two races, charter school supporters spent more than four times as much on advertisements as the union — about $11 million to the union’s $2.5 million.

Franklin said in an interview Wednesday morning that she is encouraged by the current vote tallies but won’t declare victory until all votes are counted. Franklin is currently a staffer at the Partnership for L.A. Schools, which manages 18 traditional L.A. Unified district schools.

“I anticipated we would need a couple of days to get final results. I’m definitely feeling hopeful and obviously positive about the early numbers,” she said. “But I’m going to wait until every vote is counted, and we have really solid final results before declaring anything.”

Franklin’s opponent, Castellanos, conceded the race on Wednesday. In a message to supporters, she said she was disappointed by the results and that she “could not overcome the amount of money poured into this race by outside big money.”

In a statement to EdSource, Schmerelson appeared to declare victory in District 3.

“I am gratified that so many in my district saw through the ugly, vicious campaign against me and recognized that I ran for school board to fight for the students and staff of our schools,” Schmerelson said, referencing the many negative advertisements targeted at him. “Since taking office, I have always put the needs of the children of the LAUSD first in my priorities, and I will continue to do so.”

Koziatek, Schmerelson’s opponent, did not immediately return a request for comment Wednesday.

Schmerelson and Franklin would begin their terms during a tumultuous time for the district, which is by far the largest in California with about 600,000 students. School facilities have been closed since March and students have been learning virtually, a reality that has likely exacerbated inequities.

“It’s been about seven months since schools closed, and we know many students are struggling online. We must find a way to reopen schools in the safest way possible,” Superintendent Austin Beutner said during a speech this week.

Los Angeles County is currently in the purple category of the state’s color-coded tracking system, the most restrictive ranking indicating that the virus is widespread in the county. Schools in counties in the purple category can’t reopen for in-person classes unless they are granted a waiver for elementary school students. L.A. Unified has so far yet to apply for any waivers.

School campuses in the district likely won’t open until January at the earliest, Beutner said this week. Vladovic, the outgoing school board president, has also said reopening is unlikely before January.

Franklin said Wednesday that she agrees with those assessments and called for the district to begin preparing for a possible reopening in January.

“It’s frustrating. I think what we need to do is be really tight with our plans and practice and prepare, so that come January, if we are in a better place, that everyone feels good about what that return in some form looks like,” Franklin said.

In an interview before the election, Schmerelson urged caution about any reopening of campuses, saying it would need to be “safe with a capital S.” He noted that in addition to the risk of students spreading Covid-19 to their family members, many teachers and staff are “either older or in other risk categories where it may be especially unsafe for them.”

Schmerelson is a close ally of the teachers union in Los Angeles and was endorsed by the union in his race. His opponent, Koziatek, was endorsed by the California Charter Schools Association. The association’s political arm spent more than $6 million in an effort to get Koziatek elected. That spending was split between advertisements supporting Koziatek and negative advertisements opposing Schmerelson.

In the District 7 race, Franklin was backed by wealthy charter school advocates, including Manhattan Beach-based businessman Bill Bloomfield and Netflix CEO Reed Hastings. They and other charter schools supporters spent about $5 million, split between advertisements supporting Franklin and advertisements opposing Castellanos, who was endorsed by the teachers union.

If Franklin holds onto her lead, it would give charter-backed school board members a 4-3 majority on the school board. Castellanos and Schmerelson both need to win for union-backed members to have a majority.