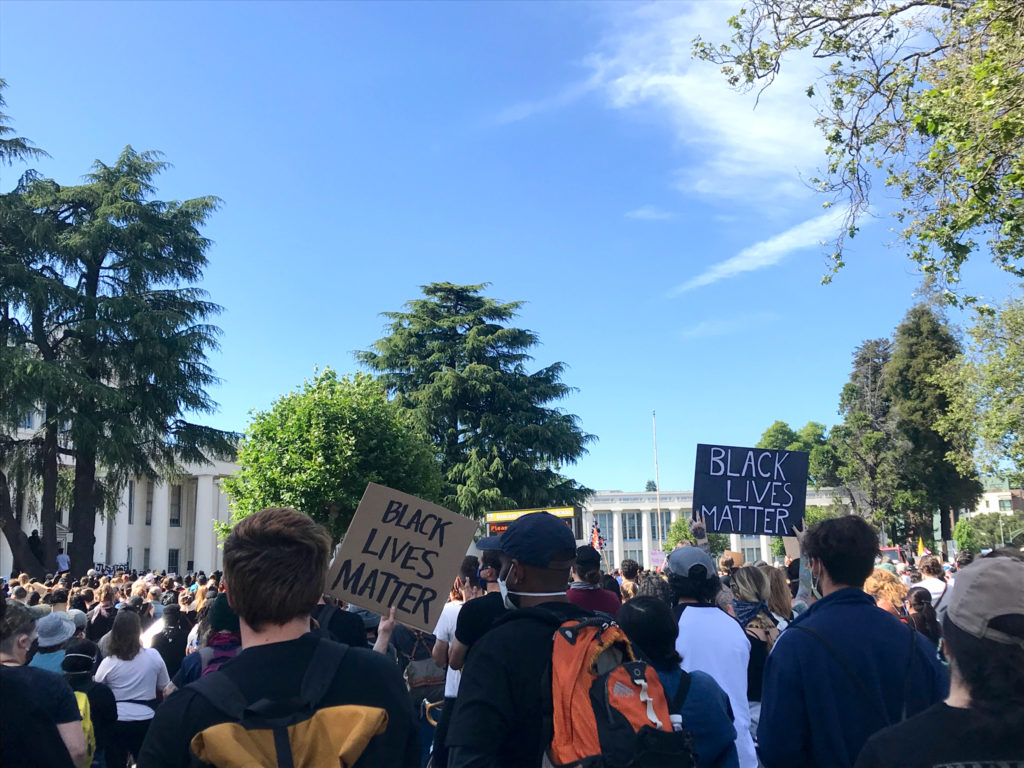 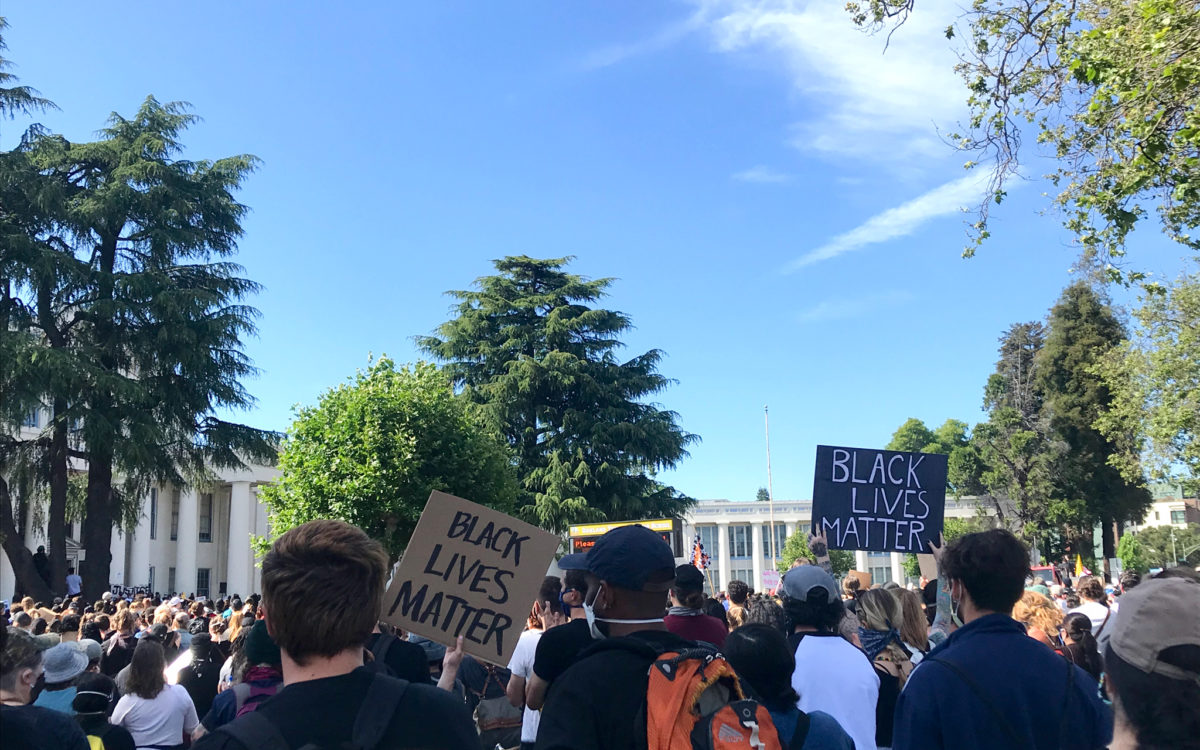 Thousands of protestors gathered at Oakland Tech High School to hear speeches before the march.

Thousands of protestors gathered at Oakland Tech High School to hear speeches before the march.

Students in the Bay Area are adding their voices to nationwide protests demanding an end to police brutality.

Thousands of Bay Area youth and adults gathered in Oakland on Monday to march in support of the family of George Floyd, an unarmed black man who died last week after a police officer in Minneapolis kneeled on his neck, which has since sparked outrage and protests across the country.

“In the year 2020 as a black woman, I have been shown that this remains a land of no promise,” one student told the crowd before the march began. “As Americans, our national leaders refuse to give us the things that any person should have: equality and justice. Our demands of life, liberty and the pursuit of happiness have yet to be given to us.”

The mass gathering was one of many replayed across the country as protesters closed on the seventh day of public outrage over Floyd’s death. Monday’s march brought together nearly 15,000 supporters, according to Oakland police chief Susan Manheimer.

With a kick off at Oakland Technical High School, the march started with several impassioned speeches and live spoken poetry performances by Oakland students and continued down Broadway to Frank Ogawa Plaza in front of City Hall.

Participants of all ages wore masks and a shared microphone was disinfected between student speakers. While six-foot social distancing guidelines were difficult to follow for the large crowd, some adults handed out free masks, snacks, bottled water and hand sanitizer down Broadway.

“This is really important, and people aren’t listening. There is only so much you can do on social media,” Krystal Situ told EdSource at the beginning of the march in front of Oakland Tech High School.  She graduated this spring from the Bentley School, a private K-12 school in Contra Costa County.

“Being a black girl in America, I want to see a change. If this is what we have to do to make change, I’m going to show up,” participant Sakeenah, a junior at Oakland School of the Arts who asked not to use her last name, told EdSource. To teachers, she added, “show up for your students.”

Several police cars and motorcycles rode behind the march and blocked off the streets leading into the plaza. By all accounts, the gathering was peaceful as students took turns to address the crowd.

But the situation escalated as the sun went down. On Monday afternoon Alameda County announced a curfew of 8 p.m. to 5 a.m. and hundreds of protestors remained in downtown Oakland after the official scheduled close of the march at 6 p.m. Police fired tear gas at a smaller crowd on Broadway 10 minutes before the curfew started as the group of more than 100 protestors headed down Broadway to the city’s police headquarters, the San Francisco Chronicle reported.

For some students, the march was the first time they had seen their classmates in person after schools across California closed in March to prevent the spread of the coronavirus.

In the days leading up to the march, Oakland’s top schools chief expressed support for students but advised against students gathering in public due to the coronavirus pandemic.

“I write today to join in the national call for justice as well to express my support of our students and families. I am outraged by George Floyd’s death at the hands of the police,” Oakland Superintendent Kyla Johnson-Trammell wrote in a letter to the community on May 30. “This outrage is only heightened by the recent murder of Ahmaud Arbery for simply jogging in a white neighborhood, and a string of other cases in which African American men had the police called on them to scapegoat their accusers’ own misconduct and criminal acts.”

“We understand the desire to be involved in planned marches and actions. While we do not want students out due to Covid-19 safety precautions, if you participate, please be vigilant in wearing a mask, maintaining six feet apart, being aware of your surroundings and not use violence under any circumstances. There is too much violence in our world and peace needs to be our path forward,” Johnson-Trammell said.

Oakland Tech has historically earned a reputation for its youth-led activism. The school’s class of 1981, dubbed “The Apollos,” spent their four high school years pushing to establish the Martin Luther King Jr. holiday in California. The decision was later followed by several other states and declared a national holiday in 1986.

Students, teachers and other community members from across the Bay Area showed up in support of the march on Monday. But before the march some teachers were already looking to bring current events surrounding the death of George Floyd and protests to the virtual classroom and open up difficult conversations in their community.

At Berkeley High, teachers have created a racial justice toolkit for parents and students as well as a summary of recent events to quickly bring others up to speed.

Alice Bynum, a ninth-grade teacher at Berkeley High, attended the youth-led march on Monday after also participating in protests on Friday and a car caravan on Sunday.

“I’m going today as a teacher, thinking of my students, and also I’m going as an adult to make sure youth are safe,” said Bynum, who teaches ethnic studies, gender studies and health. “I think it’s important for anyone to go and participate in these actions to share their support and commitment and stand up and be counted.”

Bynum and other teachers at Berkeley High are organizing a voluntary virtual conversation with students in order to help students know they are understood and supported. Having these conversations via distance learning can also be challenging, she added, since there can be fewer opportunities to discuss what’s happening on the news and how to analyze sources and information.

“I don’t see my experience on the ground is mirrored in the news coverage but if I hadn’t been there in person it would be hard to know that,” said Bynum, adding that she was pleased to see many of the protesters wearing masks and adhering to social distancing guidelines in the protests she has participated in.