Next CSU chancellor pledges to improve graduation rates, despite the pandemic 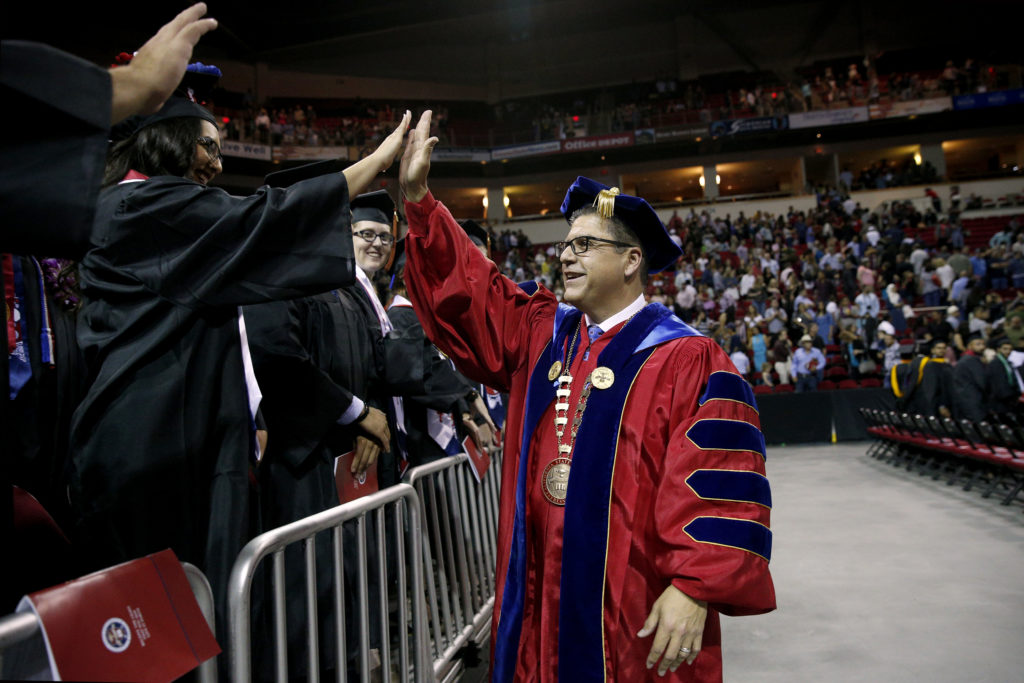 CSU’s first chancellor of color said he was drawn to the job because of Covid-19. 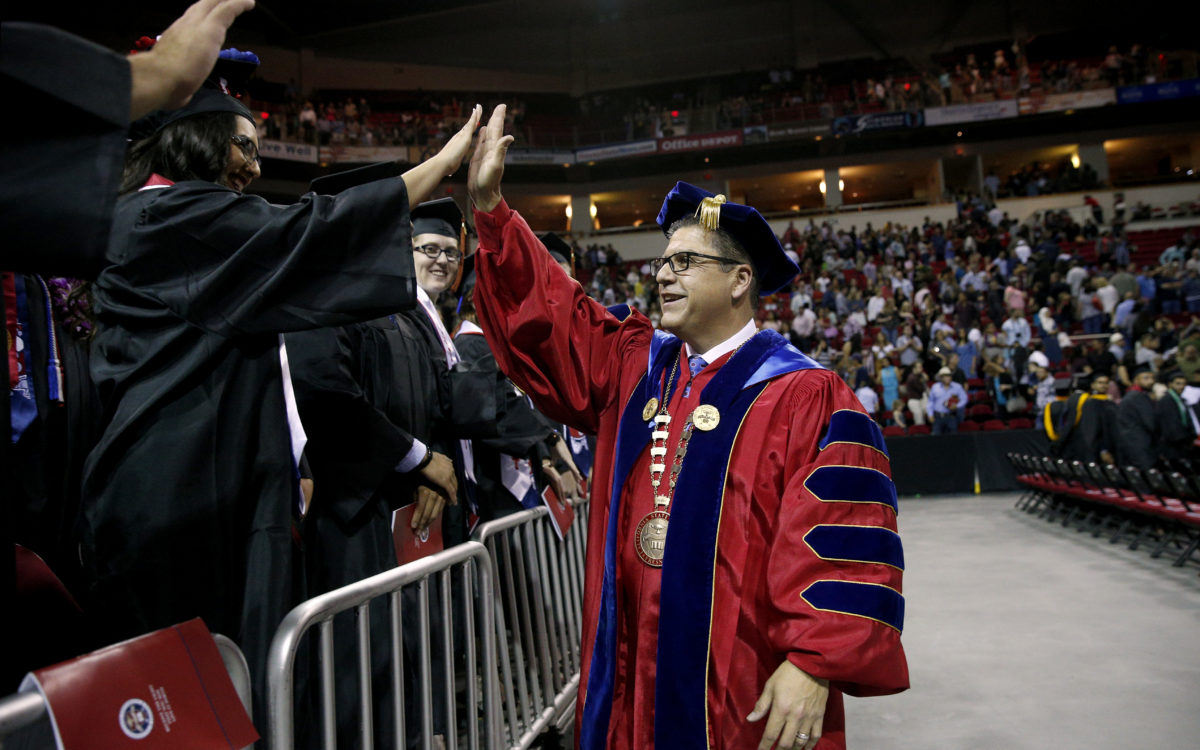 The new California State University chancellor will take over the nation’s largest public university’s helm at a precarious time, but that’s one reason why Fresno State President Joseph I. Castro wanted the job.

Castro, 53, was named the CSU’s eighth chancellor on Wednesday by the board of trustees. He’s the first native Californian, first Mexican-American and first CSU president promoted to the position. He’ll officially replace retiring Chancellor Timothy P. White on Jan. 4. Castro is taking on a 23-campus system with classes mostly online, a future of tough budget cuts and students and employees facing hardship from historic wildfires and the coronavirus pandemic.

“I decided to enter this (chancellor’s) search because of Covid,” Castro said, in an interview with EdSource shortly after his appointment. “I felt it was time for me to step up in a new way. This system needed strong, stable and experienced leadership.”

Castro, a grandson of Mexican immigrants, will become CSU’s first chancellor of color and first native Californian to hold the position when he takes over the job. He is also the first chancellor since the system was formed in the early 1960s to be named from inside the CSU system and first time the board selected a president of one of its campuses to head the system.

“Joe really gets our students, particularly in the Central Valley and in the San Joaquin Valley where he’s from,” Board Chair Lillian Kimbell said. “Coming from Fresno, which is a very poor area, he wants to give opportunities to first-generation students, many who come from very poor homes and low-income families. He is going to be such a fantastic role model … he’s the kind of person that many of our students can see themselves in.”

Castro, who grew up with a single mother, was raised for some time in public housing. He said his family — great grandparents and his grandfather, then a child — came to California about 100 years ago to work on the railroad in the San Joaquin Valley. He describes his grandfather as a “dreamer,” who grew up in tents alongside the railroad. Castro went on to become the first in his family to graduate from college. He earned a bachelor’s degree in political science and a master’s in public policy at UC Berkeley and a Ph.D. in higher education policy and leadership at Stanford University.

Despite the pandemic’s effects and perhaps cuts to the budget, Castro is still expected to move the CSU to its 2025 graduation goals. Kimbell said one reason the board selected Castro was because of his commitment to the graduation initiative and improving rates across the system. Those goals, created in 2015, seek to increase the four-year graduation rate for first-time students to 40% and the six-year goal to 70%. For transfer students, the goal is 45% for two-year rates and 85% for four-year rates.

“The Graduation Initiative 2025 goals the system has set are extraordinarily important, and we must continue to focus on them and take steps to achieve those goals,” Castro said.

The CSU system enrolls more than 482,000 students and employs 53,000 faculty and staff. Castro is inheriting a system that could see enrollment growth, despite the pandemic. During Wednesday’s board meeting, White said, he’s learned from conversations with campus presidents over the summer and fall that enrollment has increased this year despite the pandemic. Those numbers are in the process of being collected, a CSU spokesman said. In an interview, Castro said Fresno State is projecting its highest enrollment with a 6% to 7% increase this year. That campus had 24,139 students last year.

Castro has worked closely with White as the Fresno State president for the past seven years, he said and applauded White’s decision to keep most classes virtual for the spring term starting January 2021.

“I’ve been a part of all the decisions we’ve made and as it relates to Covid, we made good decisions early enough so families could plan effectively,” he said.

When White announced his retirement last year, he had expected to leave the system in a relatively stable environment. Instead, the coronavirus pandemic delayed the system’s announcement of a new chancellor by about six months, Kimbell said.

“In the January meeting, we were talking about how great the budget was looking and all the big plans we had,” Kimbell said. “But it’s a really tough time now and I think (Castro) is up for it. It’s a completely different environment he’s facing. That we’re facing.”

White said he would make himself available to Castro to ease his transition into the new position. Castro has “my full unhesitating support” in any way he finds helpful, he said.

Gov. Gavin Newsom said he is thrilled to welcome Castro as the CSU chancellor and looks forward to working with him.

“His extraordinary record as a leader in higher education will serve him well as he assumes this role at a pivotal time for students, faculty and staff,” Newsom said. “I know he has the experience, wisdom and rest of many that he will need to build on Chancellor White’s progress on graduation, retention, diversity and inclusion.”

“Great things are in store for CSU students, the CSU community and higher education in California under Joe’s leadership,” Drake said. “I’ve known and worked with Joe for a quarter-century and look forward to partnering with him in the coming years to advance higher education in our state.”

California Community Colleges President Eloy Ortiz Oakley also praised his new colleague: “The California State University board of trustees could not have picked a more committed and student-centered leader. Joe Castro will be a champion for students, and I look forward to working with him.”

Along with Drake, who is Black, and Oakley, who is Latino, it is the first time in California history the leaders of all three public higher education systems are people of color. Castro will lead a system where Latino students make up the largest ethnic group at 43%, followed by 22% whites, 15% Asians and 4% Black.

Like most colleges and universities across the country, the CSU campuses also face challenges with improving diversity and have been trying to create a more inclusive system as Black Lives Matter protests intensified over the summer. The new ethnic studies law signed by Gov. Gavin Newsom in August gives the CSU only a year to expand Native American studies, African American studies, Asian American studies or Latina and Latino studies across the 23 campuses for freshmen entering Fall 2021.

Castro said the CSU already stands out as the most diverse public university system in the country, but he “wants to take us to the next level of success … I want the position our system and our 23 campuses as a place where conversations about racial justice take place, and we come together.”

“I believe that leadership has caught up with the demographic change in the State of California and that’s a wonderful thing that I’m very excited about,” he said.

Medina said with Drake helming the 10-campus UC and Castro soon to lead the CSU, both systems are better prepared for the upcoming challenge. The CSU system faces at least a $300 million cut in state funding if Congress doesn’t approve additional stimulus relief before Oct. 1.

“(Castro) has very good relations with the legislature, and as a member of the Latino caucus, we’re all overjoyed with the selection by the trustees,” Medina said. “He has that leg up. He knows us, and we know him, and that’s a real plus for relationships between the CSU and the legislature.”

“I want to make them proud, so proud that they want to invest more because the return on investment is extraordinary,” he said.

For at least this year, Kimbell said the CSU is “in pretty good shape” because of $1.5 billion in operating reserves that it was criticized for saving last year by the California State Auditor.

“We got a lot of grief from the state auditor, but we are very thankful that we have that fund,” she said. “It’s a cushion now, but we’re looking at a possible three-year long decline in revenue.”

“I believe in student success and I’m going to commit to them that I will do everything I can to support them and work with the presidents to remove barriers wherever they exist,” Castro said.