Sharing a hotspot with five siblings who take turns connecting to the internet has made even the simplest assignments a struggle for Yesenia Velez, a high school senior in East Los Angeles.

She and other students across California have benefited from recent efforts to get internet access to all students amid school closures amid the coronavirus pandemic. But as California leaders push to close a digital divide that has persisted in California for decades, students and school leaders say closing that gap will require much more than handing out devices.

“The transition has been hard,” Velez said. “It’s difficult for me, having a family of six. We all have to turn in assignments.”

Over the last few weeks, state leaders have said that an estimated one in five California students — approximately 1.2 million — lacked broadband or a computer to access distance learning. The problems are particularly acute in rural areas, where only 34% of households are subscribed to an internet service compared with 78% in urban areas, according to an EdSource analysis of 2018 data. 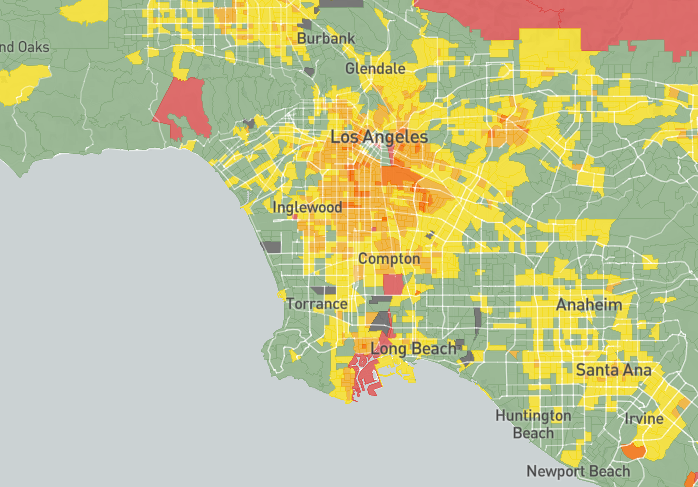 Major progress has already been made as districts, private donors and elected officials rush to get devices to students, but hundreds of thousands of students remain unable to access online learning.

“We have data collected from almost every school district across the state regarding their device and their hotspot needs,” Chief Deputy Superintendent at the California Department of Education Stephanie Gregson said at a hearing this week in the State Assembly. “Right now, that number is over 400,000 devices and over 290,000 for hotspots.”

Search here for data on broadband subscriptions by census tract and low-income and English Learner students and total enrollment by school district.

Some students, like Velez, now have access at home, but it’s not reliable service because they share devices with family members or have slow internet speeds. In some of the most remote parts of the state without cell service, meanwhile, hotspots are not even an option because of a lack of broadband infrastructure.

In fact, on Tuesday during a public briefing Gov. Newsom acknowledged that despite enormous progress, the efforts made so far are “still inadequate.” He lamented the learning loss many students will suffer as a result, citing it as a reason to possibly open schools earlier for the coming school year.

Closing the digital divide is also the focus of a new task force at the California Department of Education, co-chaired by Thurmond and Sen. Connie M. Leyva, D-Chino. During the task force’s first hearing last week, state officials reiterated their request to corporations and individuals in California to donate money or devices for students across the state.

Without equitable access to distance learning technology while students are at home, California risks exacerbating education inequality across the state.

Velez was one of the first students in her high school to receive a mobile hotspot through Los Angeles Unified School District’s partnership with Verizon, as the district’s schools prioritized distributing the devices to seniors. None of her siblings, who range in grade level from elementary school to college, have their own ways to connect to the internet, so Velez gets only a limited amount of time each day to use the WiFi.

The hotspots that LA Unified distributed to students have unlimited internet, according to the district. But Velez said that, lately, her internet connection has been especially slow.

She has frequent assignments for her two Advanced Placement classes, AP Government and AP Computer Science. She’s also planning to attend college in the fall and has had to submit scholarship applications online in recent weeks. Two of her sisters are in college and another is a freshman in high school, and they each have their own daily work. She also has two younger brothers in LA Unified elementary schools. 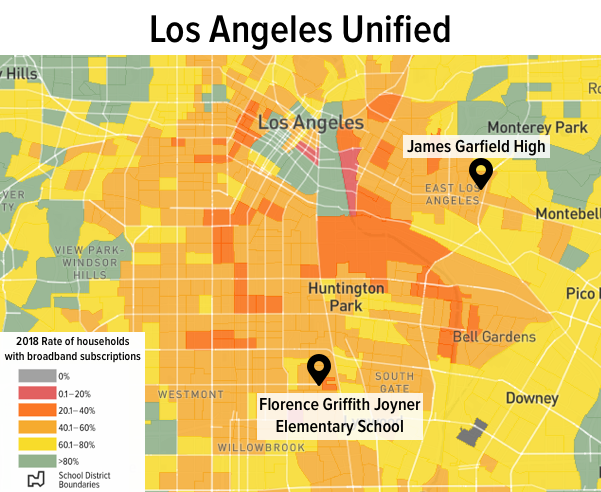 On one recent Friday, Velez nearly missed a deadline for a scholarship application, due to slow internet speeds.

“It was last-minute before the deadline,” she said. “So I would say it’s been stressful.”

Even in cities like Los Angeles and Oakland that have the broadband infrastructure necessary for widespread internet access, thousands of students don’t have sufficient technology to continue learning at home.

Before the pandemic, one in four households in Los Angeles County, about 250,000, lacked the resources for their children to participate in online learning, according to a new policy brief by Hernan Galperin, an associate professor at the USC Annenberg School for Communication. During school closures, three in 10 of LA Unified elementary school students still haven’t accessed any online learning, Superintendent Austin Beutner said this week. Additionally, one-third of high schoolers aren’t participating in online learning on a daily basis.

Beutner has suggested that government agencies, such as the Federal Communications Commission or the California Public Utility Commission, should step in to ensure that students have access to the internet, rather than relying on school districts and private internet companies to bridge the digital divide.

“But in the absence of action by others, we will address the issue and sort out the costs later,” Beutner said in a recent speech.

In addition to the partnership with Verizon, LA Unified has also pointed families to free and low-cost internet options available through providers such as Charter Spectrum.

But families are facing a range of obstacles when trying to sign up for internet plans — including long wait times for Spanish-speaking customer service, hidden installation fees and requirements to sign up for contracts that have fees after two months of free service.

Tamara Solis, whose two children attend Florence Griffith Joyner Elementary School in South LA, hasn’t been able to sign up for an internet plan because she said companies have asked for her social security number and credit card information. She wasn’t comfortable sharing that information because she expected the service to be free, with no strings attached.

With no internet access at her home, Solis has been driving her children to a friend’s house to complete their assignments.

“If they’re going to say it’s free, make sure it’s actually free,” Solis said. “When I go to the grab-and-go to get free meals, they give it to you for free. They don’t ask for your name or your credit card.”

At a public hearing led by Thurmond last week, Verizon, Charter Communications, Cox Communications and Comcast said they do not require credit card or social security information to sign up for discount programs, and AT&T said the company waived its previous requirements.

Several of the state’s other largest districts are also having trouble getting students connected. 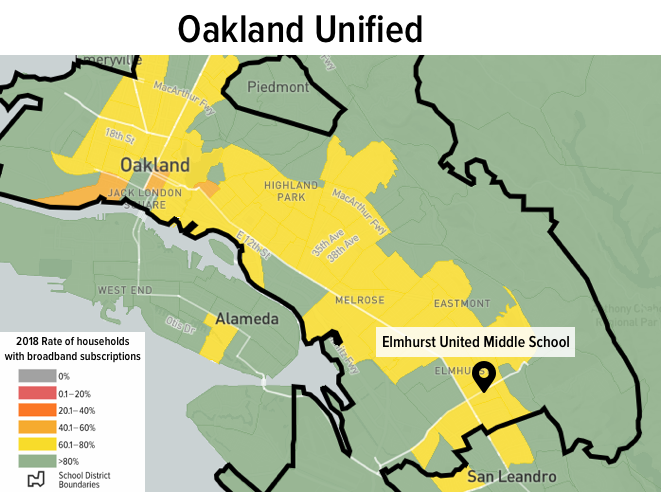 About 17,000 students in Oakland Unified didn’t have internet at home before the coronavirus pandemic, according to the Oakland Tech Exchange, a group that provides technology to low-income families in the area. That’s equal to more than one-third of all students in the district.

At Elmhurst United Middle School in East Oakland, nearly 37% of students are currently disconnected from the internet at home, said Kilian Betlach, the school’s principal. And even though Comcast has offered free internet to families in Oakland, Betlach said that some families, such as those who are homeless or who may be living in rented rooms or converted garages, are unable to benefit from the offer.

“The prevailing plans and the things that we think are sufficient to move through this time, really aren’t,” Betlach said.

Hotspots in rural areas “are a nonstarter for us.”

Rural schools are finding mobile WiFi devices don’t work at all for students in some of the most remote parts of the state that lack broadband infrastructure. That’s the case in Del Norte Unified, which consists of 11 schools and is the single district within Del Norte County, which reaches the Oregon border.

“A lot of students are in places where there isn’t consistent power, let alone internet,” said Ryan Bahten, director of information network services for Del Norte Unified, located just south of the Oregon border. “These hotspots are a nonstarter for us,” referring to WiFi devices donated by T-Mobile to the California Department of Education. 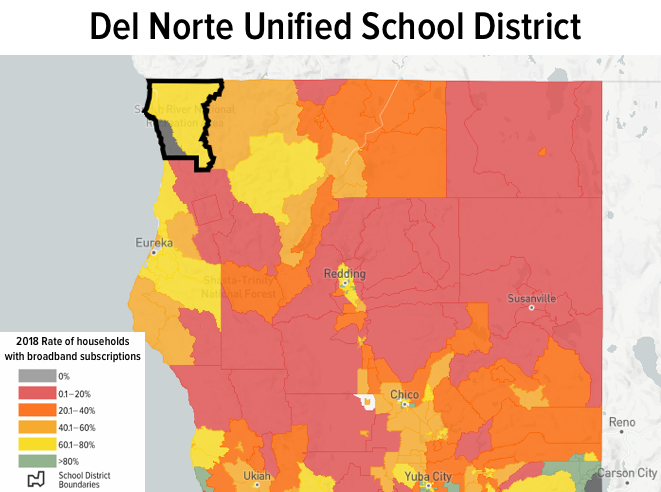 A map of T-Mobile coverage shows that the service provider reaches parts of the county near the coast, but service peters off in the more inland forest areas in Del Norte.

About 10-15% of students do not have internet at home in Del Norte County, officials found through a recent parent survey conducted in March.

During the shutdown the district has been busy delivering paper packets and Chromebooks to students who need them, many of which the district already had, along with daily meals, to regular bus stops and even homeless camps where some students live.

There’s no quick fix for areas that don’t have internet infrastructure built. Some districts have built their own LTE towers, but doing so can take months of planning and construction, and tens of thousands of dollars.

In addition to providing students devices, closing the digital divide will require building broadband infrastructure in rural communities where it doesn’t already exist, said Sunne Wright McPeak, president and CEO of the California Emerging Technology Fund, a statewide nonprofit that works to accelerate the deployment and adoption of broadband.

“It is the most fundamental thing we have to do,” she said. “Hotspot doesn’t help you if there’s no network to connect to.” 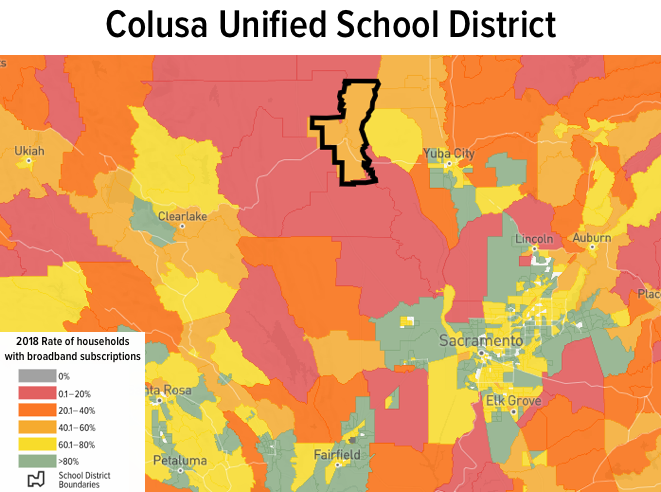 Districts in Colusa County have been working for several years to get cellular antennas built for students. But affording costs and navigating building permits has slowed the process, said Michael West, superintendent of Colusa County Office of Education.

“We talked with AT&T, T-Mobile, Sprint, Verizon, Frontier and even Comcast a few years ago to get some infrastructure. They told us if your population tripled, we still wouldn’t build it because the population is so spread out,” West said. “It’s really frustrating, but I understand they need to see the return on investment.”

Several state legislators are calling on service providers to do more for low-income families during school closures, saying that their constituents aren’t able to benefit from the deals or simply don’t know about them.

The California Emerging Technologies Fund has published a list of recommendations for internet service providers during the pandemic, first of which is to “offer interim free service to all prospective customers, including low-income households.” 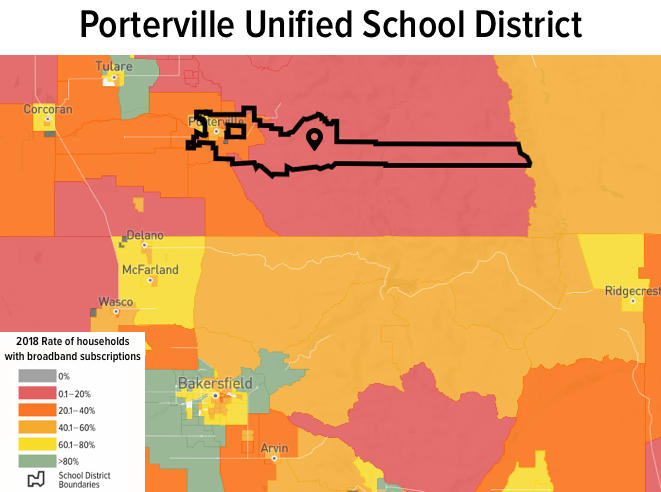 Teachers are coming up with workarounds where internet infrastructure doesn’t exist. One strategy teachers are trying in Colusa and Del Norte Counties is to download all online material to a USB drive that students can plug into their Chromebook at home.

Districts, such as Porterville, also told students that they can work from cars in school parking lots to access the internet, a drastic contrast from students able to log on comfortably at home.

“We are afraid of students not getting an educational experience. To say that keeps us up at night is a fair statement,” said Bhaten of Del Norte Unified. “We need to figure out another way.”