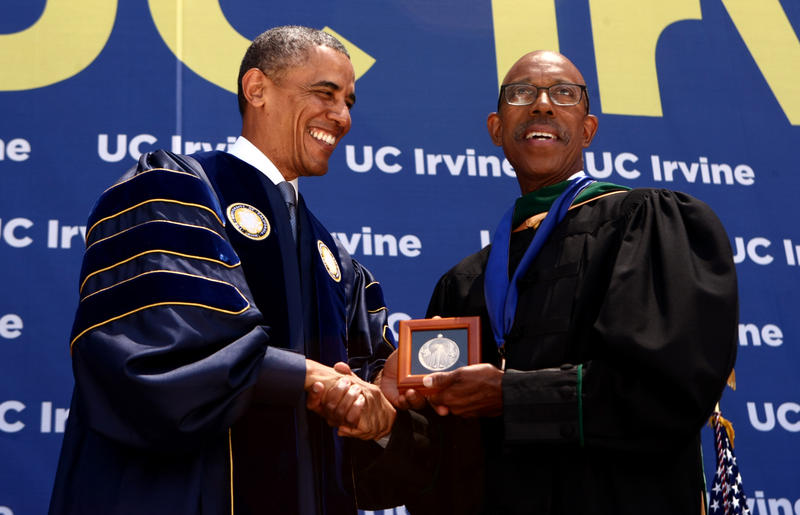 Drake, who is Black, will be the first person of color to lead the 10-campus system.

Michael Drake, the former chancellor of UC Irvine and president of The Ohio State University, has been named as the next president of the University of California, with the system’s Board of Regents voting unanimously Tuesday afternoon to confirm his appointment.

Drake, who is Black, will become the first person of color to head the system and will step into the role during an unstable period. The coronavirus pandemic has upended the university’s budget while also greatly altering instruction across the system by forcing classes to be held online.

He will also become president amid an intensifying Black Lives Matter movement that has led to a nationwide reckoning over racism and forced universities, including UC, to re-examine their own practices.

“We wanted a new president who can both lead UC through these unprecedented times and who can position the university to expand on its excellence in the years ahead,” Board of Regents Chair John Pérez said during Tuesday’s meeting.

While addressing the regents on Tuesday, Drake noted that “we face very, very significant challenges,” pointing to the pandemic, the “wounds of social injustice” and the threat of climate change.

“UC is among the few institutions worldwide best equipped to meet these challenges, perhaps not to solve them and certainly not to solve them single-handedly, but to be fully engaged in finding solutions,” Drake said. “I’m so grateful that we’ll be able to work together to do those things that make the most difference to all of us.”

The following is an excerpt from remarks immediately after regents’ vote:

We face very significant challenges. We have a global pandemic that is still spreading. We have the yawning wounds of social injustice that we see in so many ways that really tears at the fabric of our lives. We have the long term threats of environmental degradation and climate change that must be addressed if we are going to continue as a species. UC is among the few institutions worldwide best equipped to meet these challenges, certainly not to solve them single-handedly, but to be fully engaged in finding solutions.

Drake was president of The Ohio State University, the largest university in Ohio, from 2014 until stepping down from that role last week. Before that, he spent his entire academic career in the UC system. Drake was UC Irvine’s chancellor from 2005 until 2014 and was the UC system’s vice president for health affairs from 2000 through 2005. He also received his M.D. from UC San Francisco in 1975.

In his new role, Drake will replace Janet Napolitano, who has been in the position since 2013. Drake will receive a base salary of $890,000, much higher than Napolitano’s base pay of about $570,000 but in line with the salary Drake made at Ohio State, according to the Columbus Dispatch.

At Ohio State, Drake’s accomplishments included implementing a policy that freezes tuition for four years for incoming, in-state freshmen and helping the university reach its highest-ever graduation and retention rates. The university’s six-year graduation rate reached 86% in 2019, while the university also had a 94% retention rate, which is the percentage of first-year students who return for their second year.

On a conference call Tuesday with reporters, Drake also touted the increased enrollment of Black students at Ohio State while he was president, saying that the university doubled the number of Black students that were admitted between 2014 and 2020.

In a conversation with UC student leaders Tuesday, Drake “affirmed his commitment to equity and inclusion, to accessibility and affordability, to rethinking public safety and to student consultation,” according to Varsha Sarveshwar, president of the UC Student Association.

“I am hopeful that Dr. Drake will work in partnership with UCSA to follow through on these principles, and I challenge him to boldly pursue a vision for the University of California that is grounded in economic, social and racial justice,” Sarveshwar said in a statement.

When Drake takes over in August as UC’s president, his immediate challenge will be moving the university forward as the coronavirus surges in many parts of California, creating a tumultuous period for the 285,000-student UC system.

The system’s nine undergraduate campuses are each planning to offer most classes online in the fall and only bring back a limited number of students to campus. The system also faces up to $470 million in budget cuts if Congress doesn’t provide additional stimulus relief before Oct. 1.

At the same time, the fallout from protests following the police killing of George Floyd has been felt across the UC system. Students and UC’s Academic Senate have called for a reform to the university’s police department. Individual campuses have moved to make changes, such as UCLA, which announced last week that it would create a Black Resource Center, hire additional faculty and fund new research focused on racial justice.

In a statement in May following Floyd’s death, Pérez and President Napolitano said the system would “take immediate action to re-examine our own practices,” including by improving the training of its police force.

Adrianna Kezar, the co-director of the University of Southern California’s Pullias Center for Higher Education, said in an interview Tuesday that “these are probably some of the most challenging times any leader could come into a system of higher education.”

She added: “There’s a worldwide pandemic unlike any in over a hundred years and the greatest press for social change since the 1960s. We are in truly, truly unprecedented times and it’s going to take a leader with savvy that cuts across a lot of areas.”

“You don’t want just somebody who’s a good political or financial leader,” she said. “They also have to be a leader who understands the experience of students of color and of faculty of color. So you’re talking about a president that can range from somebody who’s got a critical consciousness around race issues to having a political savvy to argue for their share of the budget.”

Michele Siqueiros, president of the Campaign for College Opportunity, said in a statement that Drake is well-equipped to advance racial justice across the UC system. She said Drake comes to UC “with a remarkable record of being unabashed in supporting access, completion and racial equity.”

UC Riverside Chancellor Kim Wilcox also praised the selection of Drake, calling him a “wise and thoughtful leader, never afraid to do the right thing at the right time.”

Wilcox serves with Drake on the board of the University Innovation Alliance, a coalition of 11 public universities that attempts to increase college access for low-income students, first-generation students and students of color.

“Michael has committed and contributed broadly to equity in public universities across the nation,” Wilcox said in a statement.