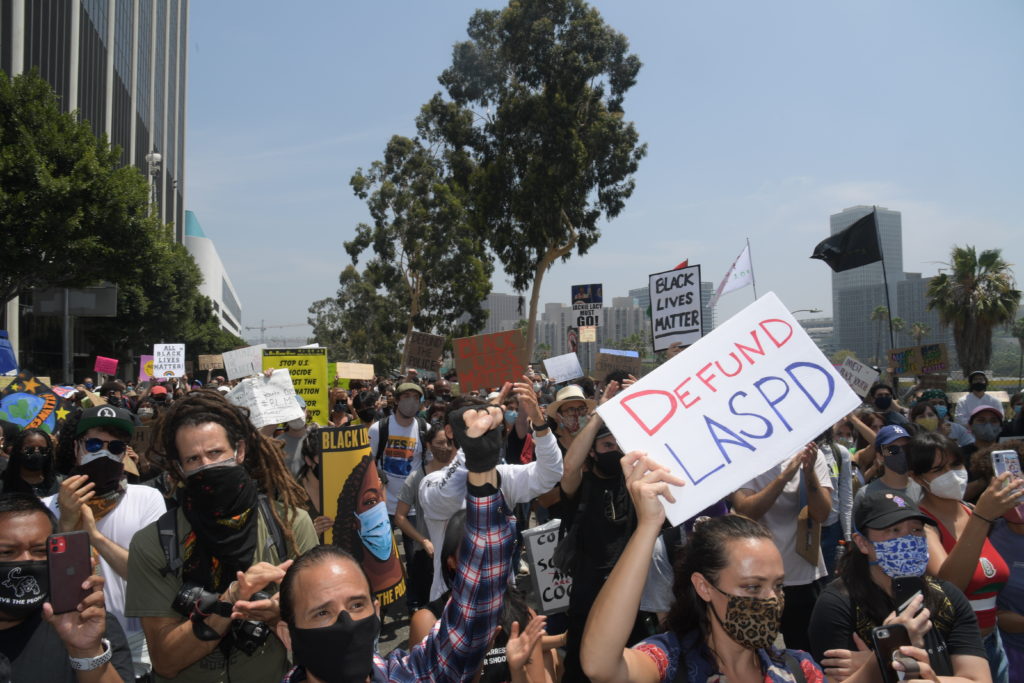 Votes come as some districts across California pledge to remove police from schools. 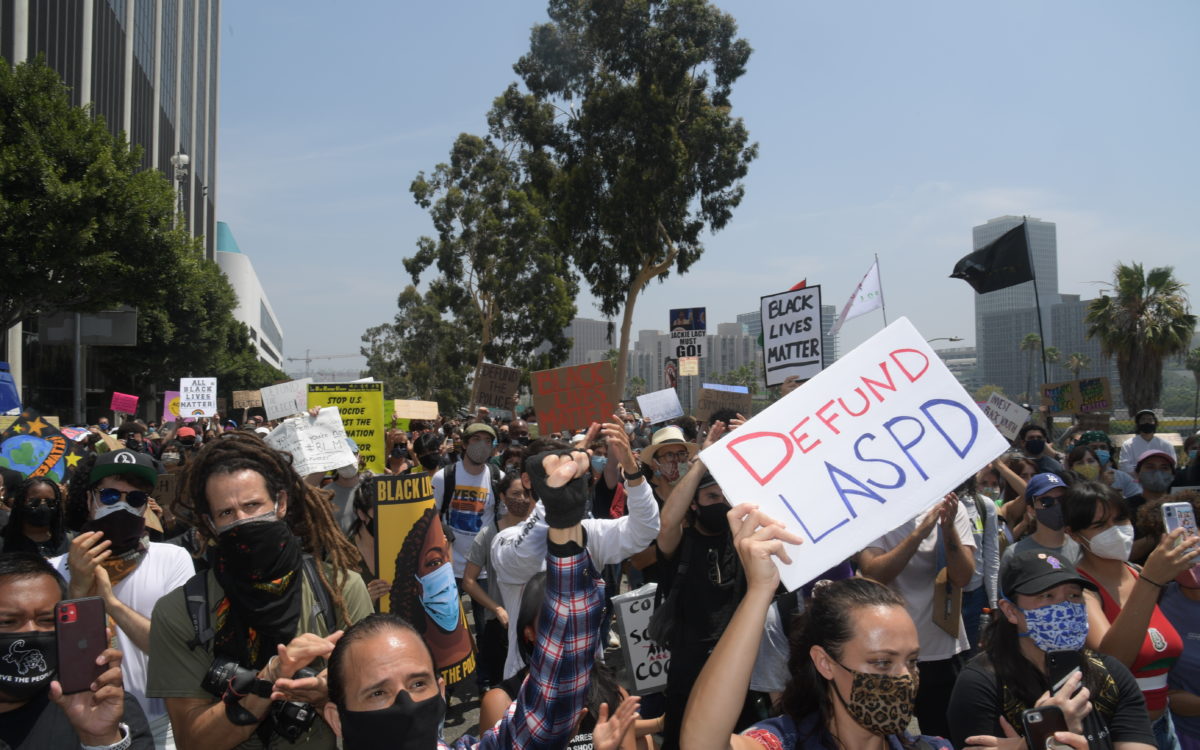 The school police department in Los Angeles Unified, the largest school police force in the nation, will remain intact and fully funded — although reform remains possible in the near future.

Despite mounting demands from students, activists and labor unions to diminish the role of school police in California’s largest school district, the L.A. Unified school board on Tuesday evening rejected two motions that would have reduced spending on the district’s police department. One would have cut spending on the department by 90% by 2024. The other would have immediately reduced funding by almost 30% and left the door open to completely eliminating the department.

The board, during the meeting that lasted almost 12 hours, also rejected a third resolution calling for a review of the school police, but no spending cuts.

“I’m just trying not to have us make a mistake and take something away that we shouldn’t. We should wait to take it away if a study tells us we have too many police,” said George McKenna, one of three former principals on the board who opposed any reductions to school police without first studying the issue.

“We’re caught up in the emotion of the moment in America. And I got it. I get it better than most,” added McKenna, the only Black school board member.

Across California this month in the aftermath of the police killing of George Floyd — from Stockton to Moreno Valley to the San Francisco Bay Area — students and community organizers have called on their local school boards to either eliminate their districts’ school police departments or terminate contracts with local police agencies that assign officers to schools.

In at least three California districts — Oakland, San Francisco and West Contra Costa — school boards have signaled they plan to take police out of schools or have already voted to do so. School districts in Minneapolis, Portland and Denver have taken similar steps.

That gave hope to activists and Black students in Los Angeles who for years have advocated for diminishing the presence of police in L.A. Unified schools. They point to a body of research showing that interactions with school police can have disproportionately negative outcomes for Black and Latino students. For example, a 2018 analysis by UCLA’s Million Dollar Hoods project revealed that Black students in L.A. Unified accounted for 25% of all arrests, citations and diversions issued by the school police from 2014 through 2017, despite making up less than 9% of the student population.

Tony Thurmond, the state superintendent of public instruction, acknowledged during a press conference Wednesday that the presence of school police leads to more discipline of Black and Latino students. He said he has asked WestEd, a nonprofit education agency, to review the impact of school police to “help us sort out whether or not having police on campuses lends to safety.”

But Tuesday’s votes in Los Angeles show that change won’t be simple in L.A. Unified, which is home to the largest independent school police force in the nation, with more than 400 officers and a budget of $70 million.

“If we don’t do anything today, it doesn’t mean we shouldn’t do anything. It means that we couldn’t find a way to find a compromise where four, five, six or seven of us could agree. I think that’s a shame because it would be nice to have had some outcome to move things forward,” said board member Jackie Goldberg, who along with board members Kelly Gonez and Nick Melvoin authored the resolution to reduce the department’s funding by 30%.

If they choose to, board members could introduce new proposals to reform the school police at future meetings. In the meantime, Superintendent Austin Beutner announced earlier this week that he is convening a task force made up of educators, attorneys and policy experts to assess the practices, policies and budget of the school police department.

Unsatisfied with Beutner’s response, dozens of students and community organizers who participated in Tuesday’s meeting urged the board to substantially reform the department.

But the board came to a stalemate Tuesday evening, more than 11 hours after convening its meeting. Board members McKenna, Scott Schmerelson and Richard Vladovic — all former principals — were opposed to any reductions to the school police without first studying the issue.

The other four board members — Mónica García, Goldberg, Gonez and Melvoin — all favored making cuts to the department but failed to come to a consensus on how to make those changes.

García proposed the most aggressive resolution to scale back the school police. Her motion would have cut the department’s budget by 90% over the next three years — starting with a 50% reduction in 2021 before cutting another 25% from the budget in 2022 and another 15% before the 2023-24 school year. She proposed redirecting those dollars to services supporting Black students.

Her resolution won the widespread support of activists and Black students, and was also endorsed by the two largest labor unions representing district employees: United Teachers Los Angeles and Local 99 of the Service Employees International Union, which represents most of the district’s non-teaching workers.

The board voted 4-2 to reject García’s motion, with Gonez abstaining. Gonez said she needed more information before agreeing to the proposal. Other than García, only Melvoin voted in support of that resolution.

“They squandered this opportunity to do the right thing,” Williams said. “Let’s organize with strengthened resolve to ensure that they don’t squander the next one.”

“We knew Monica Garcia’s resolution faced an uphill battle,” said Chin, who is also a founding member of Dignity in Schools, a national organization that advocates for police-free schools.

CADRE and Dignity in Schools were among the many organizations that joined in protests and social media campaigns organized over the past several weeks and designed to pressure the L.A. Unified school board into eliminating the school police.

The latest protest was held Tuesday morning, when students and activists gathered outside the district’s headquarters in downtown Los Angeles as the school board convened its meeting.

Many of the students also participated in public comment, including Kamarie Brown, a rising senior at Crenshaw High School who told the school board that saying “Black lives matter” is not enough.

Goldberg pitched her resolution as a compromise between García’s proposal to drastically scale back the department and the motion that didn’t call for any spending cuts. Goldberg’s motion would not have immediately reduced the size of the school’s police force, instead making reductions to vacant positions, overtime and non-salary costs and putting a freeze on new hiring. It also would have charged Beutner’s task force with making a recommendation to the board by July 30 on whether the district needs a police department at all.

The third resolution, authored by McKenna and supported by school police, would have created a committee to review “where there is a need for guideline changes, additional training and prevention measures to ensure peaceful and safe campuses,” according to the motion. It did not call for any budget reductions.

“There have been many credible threats to students and staff in this district, and those threats were averted by the very same professional, compassionate police officers that serve our youth, but that some are willing to do away with on a political whim,” he said.

Students, activists and many academics have called for schools to hire more counselors and fewer police officers, saying that investing in mental health services would lead to better and safer school climates.

However, L.A. Unified’s police department has continued to grow. On Tuesday, a research brief published by UCLA’s Black Male Institute found that since the 2005-06 school year, the budget for the district’s school police has increased by 48%, even as enrollment in district schools has decreased by about 18% in that time.

The increased presence of school police is designed to keep and make students feel safe, but has the opposite impact for many Black and Latino students, who often say they feel uneasy around school police. The Black Male Institute’s research brief published Tuesday found that 58% of Black and Latino students say they feel safe at school, compared to 75% of white students.

Amara Abdullah, a rising freshman at Hamilton High School and a member of Black Lives Matter Los Angeles Youth Vanguard, said during Tuesday’s board meeting that being around school police “does not make us comfortable in our learning environments.”

“If we have school police on campus, then it’s not only going to make it harder for us to learn, but it’s going to also make us feel like we’re the criminals in the school,” she added.

District leaders have pledged to try to better understand the experiences of students like Abdullah through the work of the task force, which will collect “perspectives from Los Angeles Unified’s key stakeholders, including students, staff, families and community members” and make initial recommendations to the school board this summer, the district said in a statement this week.

But students and activists are already voicing their disapproval of that plan, arguing that there’s enough academic research showing the harm that school police cause and that further assessments like the task force aren’t needed.

They say they will press forward and continue advocating for police-free schools.

“I absolutely think that our movement to abolish police from schools will be energized and strengthened regardless,” Chin said.